Much has been written about the Christmas Day ‘Truce’ on 25 December 1914 – while the popular image of Christmas Day 1914 might be that ‘peace reigned’, this was not universal across the western front. 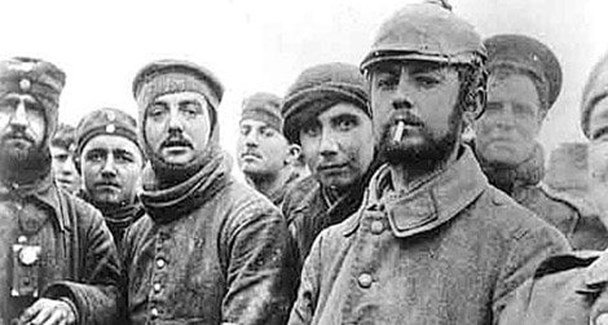 Above: the Christmas Truce 1914

Indeed, the CWGC records the deaths of 78 men on the western front on 25 December 1914 – whilst just over 30 of these ‘died of wounds’, 43 can be identified as ‘killed in action’, so clearly the truce was not universal across the western front.

This was particularly the case for the 2nd Division in the Festubert to Cuinchy sector, where 4 Brigade (primarily 2/Coldstream and 2/Grenadier Guards) suffered a number of losses on Christmas Day. On the night of 23/24 December, these two battalions took over trenches just east of Le Touret, having marched several miles from Bethune. The Brigade diary records that the relief took 11 hours and that several men of 2/Grenadier Guards had to be dug out of the communication trenches. 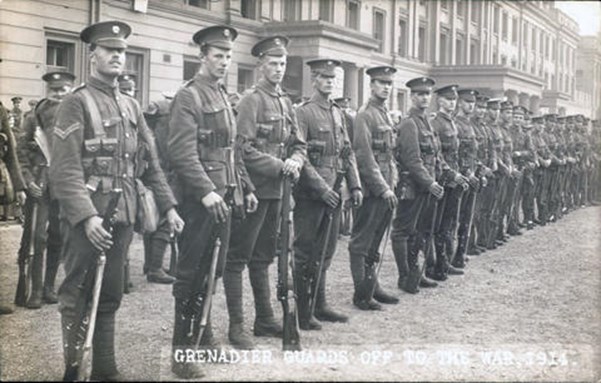 Above: 2/Grenadier Guards on the outbreak of war. Photo:globeatwar.com

Both battalion war diaries paint a depressing picture of conditions:

“Trenches in very bad state. The men were standing in mud, slush and water over the tops of their boots” [2/Coldstream Guards]

2/Grenadier Guards suffered a number of losses on 24 December including Captain Sir Montagu Aubrey Rowley Cholmeley and 2nd Lt John H G Nevill. The latter had joined the Battalion only days before his death. 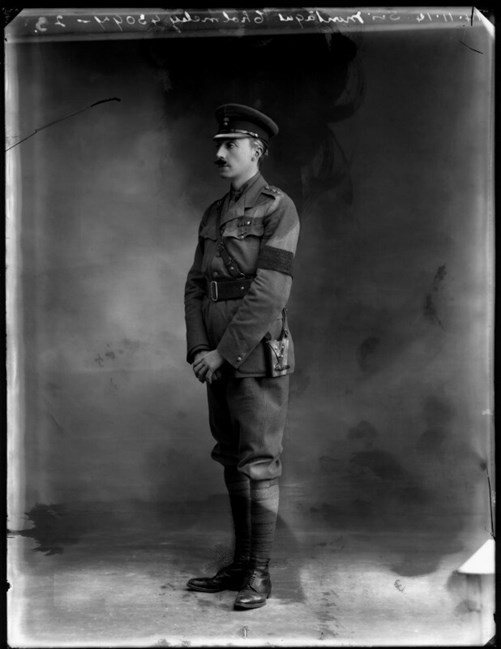 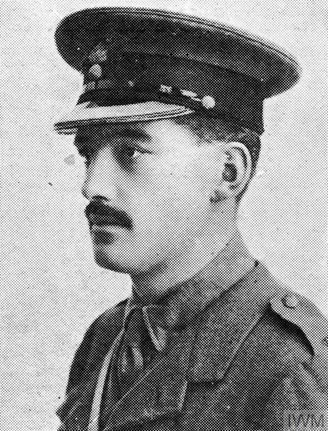 Neither battalion diary provides much detail for 25 December but it was clear that a great deal of shooting took place during the day, with 2/Grenadier Guards noting three 3 killed and two wounded. 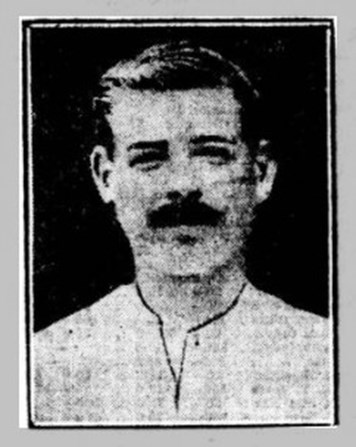 The 2/Coldstream Guards suffered five losses. The Brigade diary noted that 2/Coldstream felt that the accuracy of the German snipers could only be accounted for by the use of telescopic sights.

One of those killed by this deadly sniper fire was Private William Bannister, aged 18. 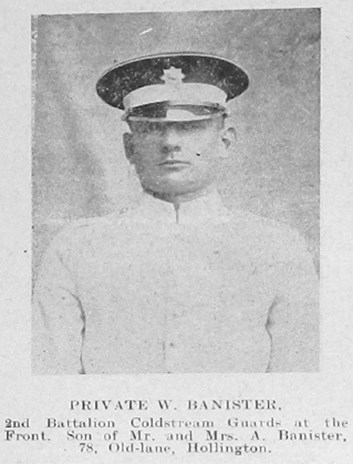 By 26 December, the Grenadier Guards were in billets – but 22 men reported to hospital with frostbite. A letter from one man in the regiment to his family indicated:

“Perhaps you read of the conversation on Christmas Day. It is all lies. The sniping went on just the same; in fact our Captain was wounded, so don’t believe what you see in the papers”.[1]

The Captain referred to in that letter was Captain Edward George Spencer-Churchill, who would survive the war.

The Territorial 1/Hertfordshire Regiment, also part of 4 Brigade, moved into trenches south of Rue des Bois on Christmas Eve. Two men from that Battalion were killed on Christmas Day. Sergeant Thomas Edward Gregory and Private Percy Huggins were both killed by snipers. Again, the war diary is laconic. 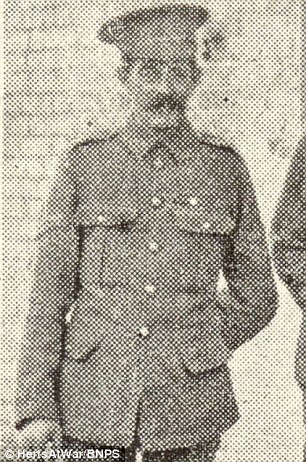 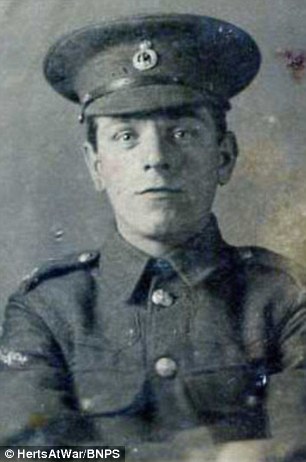 Above: Sergeant Tom Gregory and Private Percy Huggins – both killed by snipers on Christmas Day

Tom Gregory left a widow and seven children, the youngest born just days before his death. 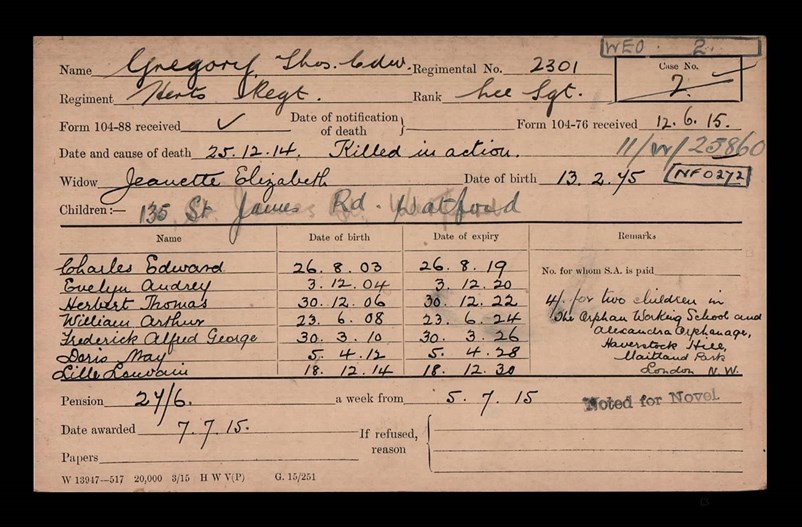 Above: the pension card for Thomas Gregory.

What the diary does not record is that the Battalion ignored the overtures made by the Germans, as recounted by Clifford Lane of 1/Herts:

“Later on in the night there was a great deal of commotion going on in the German front line which was about 100,150 yards away, I suppose. And after a few moments there were lighted objects raised above the German parapet looking like chines lanterns to us. The Germans were shouting over to our trench, there’s no doubt about that at all, and before we could take any action or do anything we were ordered to open rapid fire, you see. Which we did. The Germans did not reply to our rapid fire they simply carried on with their celebrations, ignored us completely and were having a very fine time indeed”.[2]

For 2/Welch Regiment, in the 1st Division in the Chocolat Menier Corner – Festubert sector, there appeared little evidence of a truce. The diary records that Lt Hollingsworth and 70 men were sent to establish themselves in a communication trench. They came under heavy fire from the enemy, with the diary recording four killed (although CWGC records only two killed that day from the Battalion). One of those killed was Private Henry George Dolphin, aged 15yrs. For the 2/Royal Munster Fusiliers, Christmas Day ‘passed quietly’ although two men, Privates John Kenneally and William Lyons, both from Cork, were killed.

Meantime, in 6th Division in the Frelinghien – Bois Grenier sector, the 1/Leics had gone into the trenches at Rue des Bois on 11 December. Several entries in the diary in the days leading up to Christmas remark “Quiet all day”. But by 22 December, the trenches were in a bad state due to rain. Snow fell on 23 December. The entry for 25 December laconically states

What this does not tell us is that Lance Corporal George Henry Sutton was killed by a sniper whilst taking part in the Christmas Truce.[3]

The second man killed was Private James Farrell. Their graves were subsequently lost and both are commemorated on the Ploegsteert Memorial.

2/York and Lancasters were in trenches at Grande Flamengrie – the diary suggests that advances made by the Germans for an armistice on Christmas Day were ignored “no notice taken - usual sniping and a few bombs thrown”. Private Albert Fenwick of the battalion was killed that day. 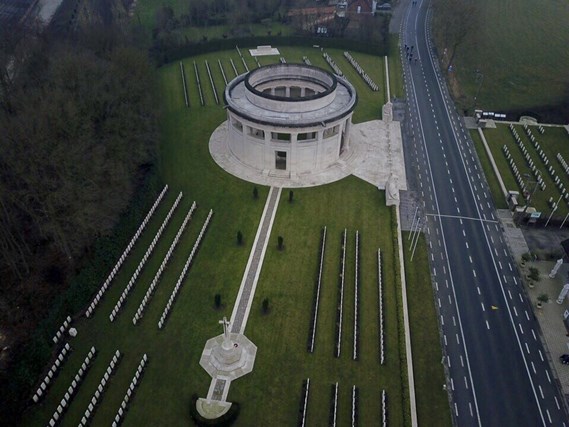 Above: Ploegsteert Memorial where several of those killed on Christmas Day 1914 are commemorated. Photo - CWGC

In 8th Division, in the Rue des Bois – Port Arthur sector) the diary of 2/Northantsprovides more detail about events over Christmas:

“On Xmas Eve, the Germans and our men got into conversation eventually meeting on the no man’s land between the trenches. Cigarettes and buttons (non-regimental) were exchanged and one of our men even got to their parapet and looked in…..They wished to have no firing on Xmas Day to which we agreed as far as concerned the two companies of ours (A & B) immediately opposite this part of their line. The cessation was to be from midnight to midnight.”

“On Christmas Day, the Germans sent over some cigars and bread, reciprocated with gifts of paper. But “further intercourse was stopped by superior orders” although a letter had by then been received from German officers in far from complimentary terms, rejecting any idea of a ‘truce’. In spite of this, the war diary notes that “the truce was…observed honourably on both sides”.

But this did not extend to all parts of the line held by the 2/Northants, as Captain Charles Harold Reynall Watts was killed that day – the diary noting “there seems no reason to suspect treachery”. 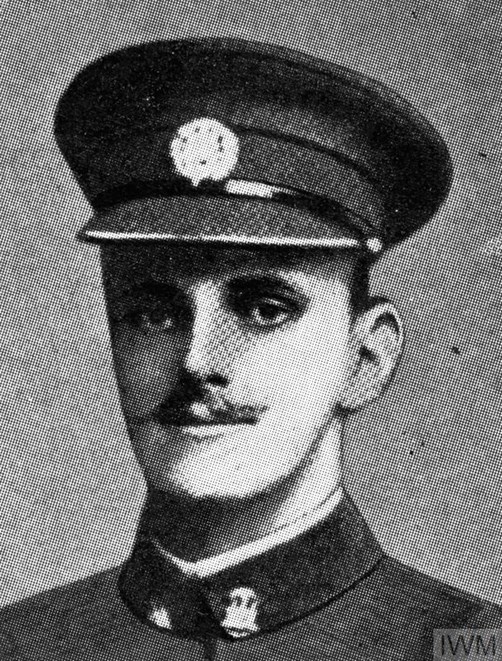 Also in the 8th Division, the 2/Devonshires relieved the 2/Scottish Rifles on Christmas Eve. The war diary records:

“informal armistice during daylight. Germans got out of their trenches and came toward our lines. Our men met them and they wished each other a Merry Xmas, shook hands, exchanged smokes etc. About 7.30pm sniping began again. We had one man killed and one wounded”.

The casualty that day was Private Richard Gregory, 26 years old, from Devonport.

In the 4th Division, the war diary of the 2/Monmouthshires - who were in the in Douve - St. Yves - LeGheer sector - records that on Christmas Day there was ‘practically no firing’ by ‘mutual agreement’. Nonetheless, there were casualties. Sergeant Frank Collins was killed whilst delivering cigarettes to the Germans.

A diary kept by Lieutenant Frederick Brown recounts the death of Frank Collins:

“German soldiers beckoned him over and Collins got out and walked halfway towards them, in turn beckoning someone to come and take the gift [of cigarettes]. However they called out ‘prisoner’ and immediately Collins edged back the way he had come. Suddenly a shot rang out and the poor Sgt staggered back into the trench, shot through the chest. I can still hear his cries ‘Oh God, they have shot me’ and he died immediately”.[4] 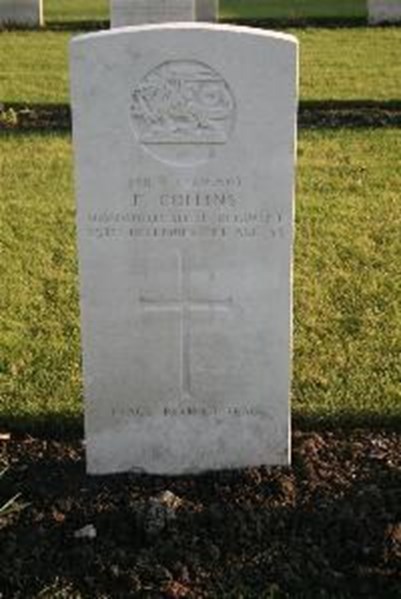 Above: the headstone for Sgt Frank Collins, buried in Calvaire Essex Military Cemetery

Private Ernest Palfrey was shot whilst returning to his trenches after burying the dead. 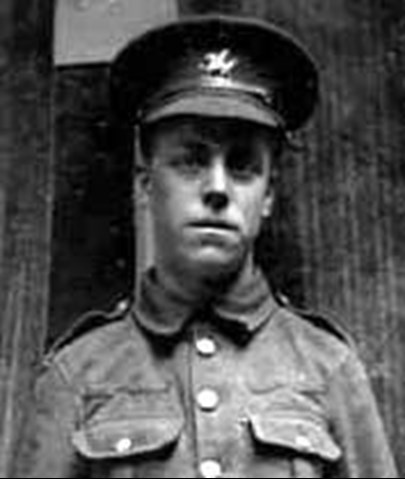 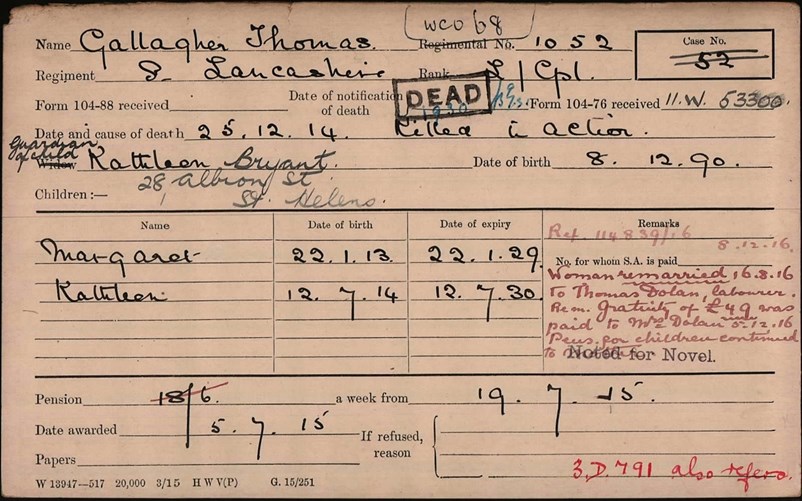 Above: the pension card for Lance Corporal Thomas Gallagher

In 7th Division, in the Bois Grenier – Rue des Bois sector, overtures for any truce appear to have been more warmly received. This Division, and the 5th, in the Messines sector, had the fewest number of casualties on Christmas Day.

“Christmas Day. No firing. An unofficial armistice took place and troops of both sides met and buried the dead. The battalion fixed up a board with ‘A Merry Xmas’ written on it in German midway between the trenches and was evidently much appreciated by the enemy”. [2/Wiltshires].

“We heard a German singing Holy Night of course in German naturally. Then after he had finished there were all sorts of Christmas greetings being shouted at us across no man’s land. These Germans shouted out ‘What about you singing Holy Night?’ Well we had a go but of course we weren’t very good at that. Anyway they said ‘Meet us and come over in no man’s land’. Well after a time we were allowed – a limited number of us – our officers allowed a limited number of us to go into no man’s land”.[5]

Although both Soldiers Died in the Great War and the CWGC record that Private John Cameron of 2/Gordon Highlanders was killed in action on Christmas Day, the diary records:

“Not a shot fired on either side. By agreement with the Germans, the dead of both sides between the trenches were collected and buried side by side”. [2/Gordon Highlanders]

As can be seen, peace did not entirely reign on Christmas Day 1914 – but significantly, there would be no repetitions in the later Christmas Days of the war. 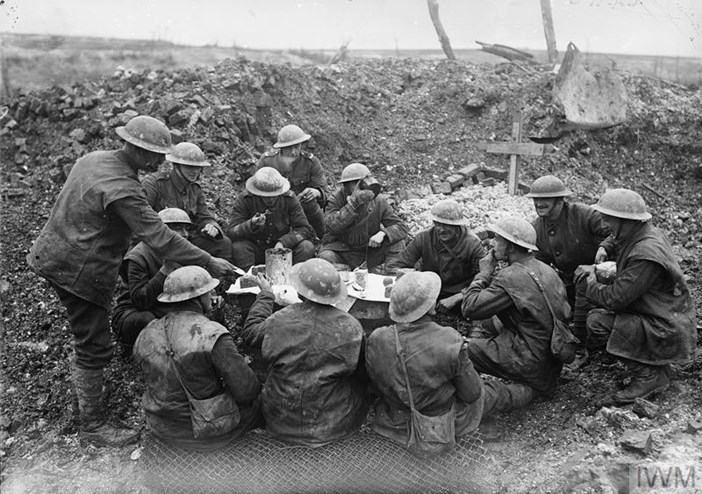 Not a Shot was Fired – Compiled by Alan Cleaver, Lesley Park and fellow volunteers

[3] Information provided in GWF thread www.greatwarforum.org/topic/277636-remembering-l-cpl-george-henry-sutton-1st-leics-regt-kia-25-dec-1914/ by a relative

[4] Quoted in ‘The Christmas Truce and football match of 1914’ Stephenliddell.co.uk