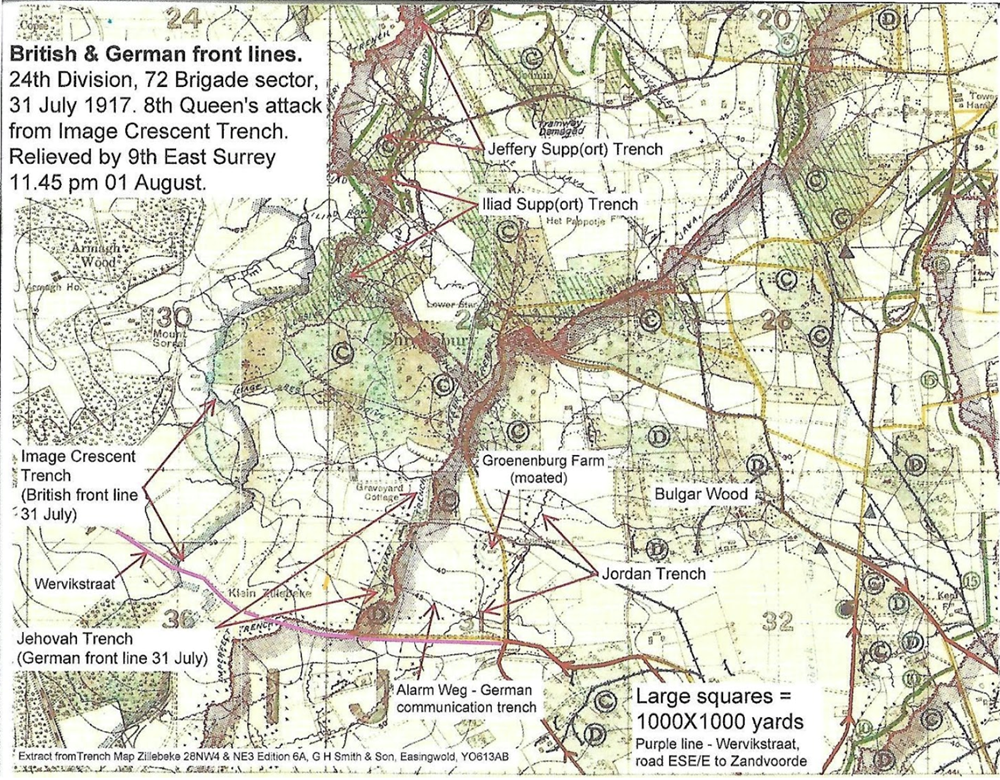 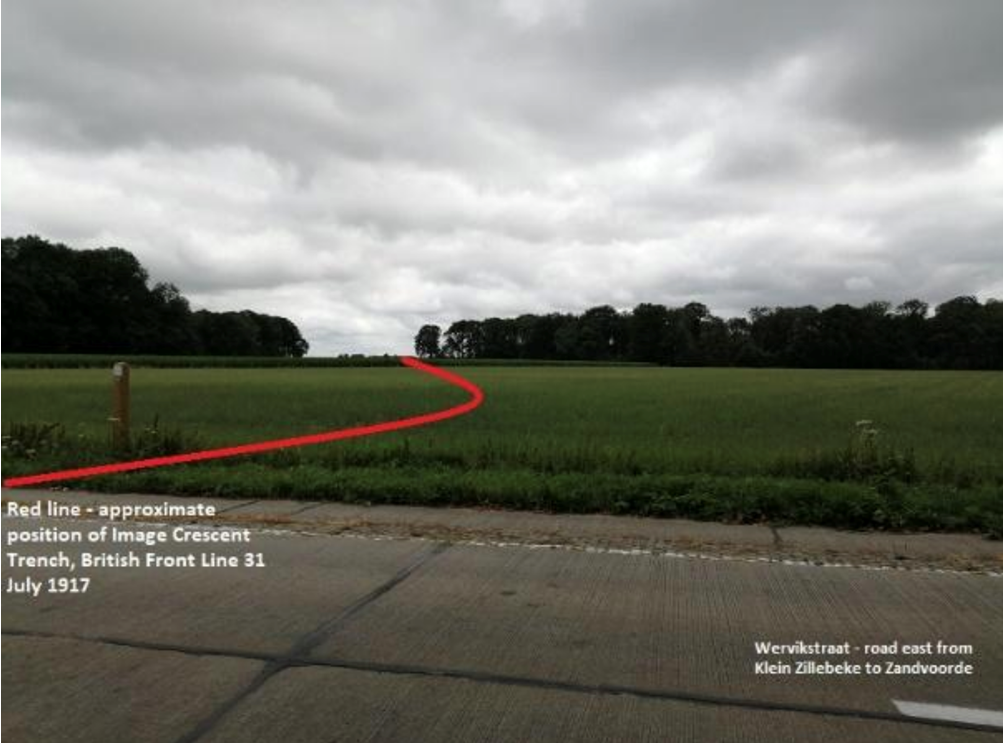 8th Battalion Queen’s (Royal West Surrey) Regiment, 72 Brigade, 24th Division had attacked from this trench, left to right, on 31 July 1917 – the first day of the Third Battle of Ypres. They managed to advance about 1000 yards then were forced to fall back to Jordan Trench (see later photograph).

R C Sherriff and the men of ‘C’ Company, 9th Battalion East Surrey Regiment, 72 Brigade, 24th Division, advanced from Image Crescent Trench at about 5pm on 1 August to relieve 8th Queen’s. However, even before they had reached it they had suffered casualties. Sherriff wrote:

‘As far as you could see, it was like an ocean of thick brown porridge (it had been raining for three days) …. The enemy had begun to send over heavy shells called coalboxes. Fired from away behind the German lines, they came down almost perpendicularly and exploded with a thunderous crash and a huge cloud of thick black smoke.’

Once beyond Image Crescent Trench Sherriff

‘…. began to see the relics of the first wave of the attack. It had apparently been caught in machine-gun fire. Most of the dead men had rolled down into the waterlogged shell holes and lay grotesquely sprawled like broken wax dolls, drained of blood by the stagnant water.’ 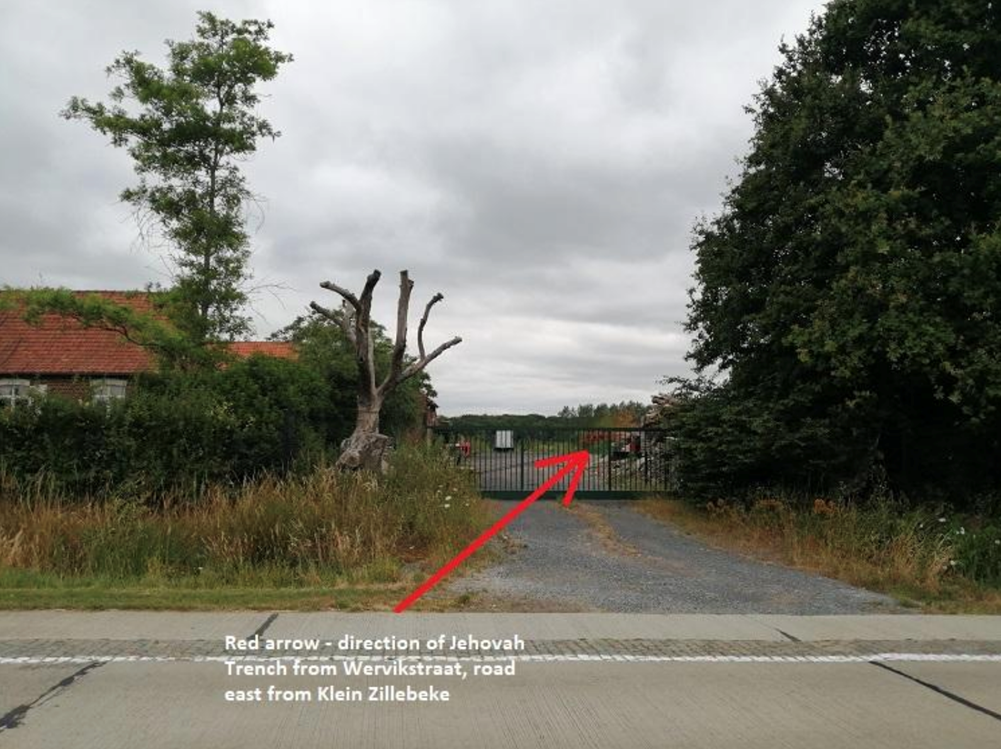 Unfortunately, it is impossible to see the likely position of this trench from the road (Wervikstraat) because of buildings and trees – but this is where the trench crossed the road and ran across the battlefield curving in a roughly two o’clock direction for the first 100 yards or so then in a one o’clock direction.

‘We came to the shattered trenches of the German front line …. (Jehovah Trench) We came upon a long line of men, some lolling on the fire step, some sprawled on the ground, some standing upright, leaning against the trench wall. They were British soldiers – all dead or dying.’ 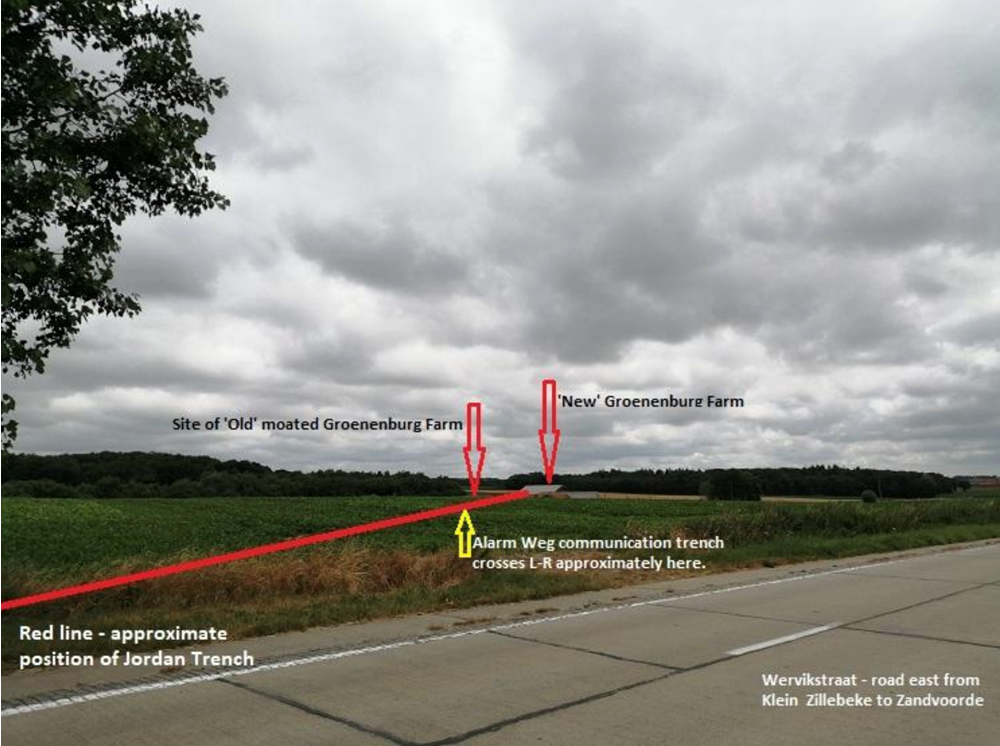 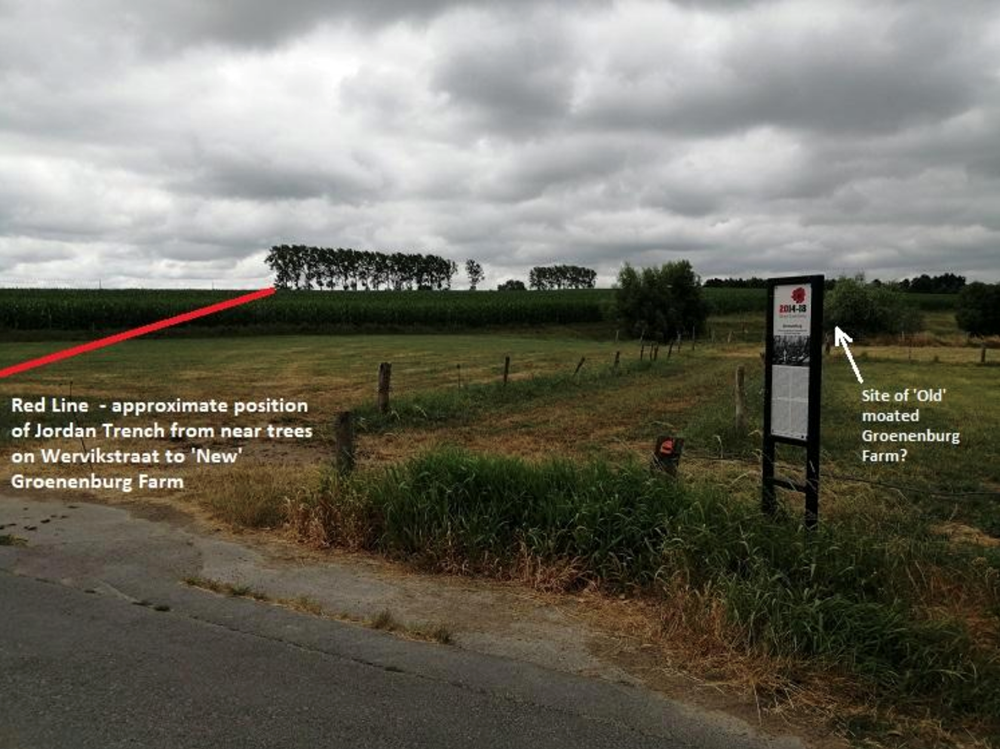 ‘We came at last (no time stated) to some of the survivors (8th Queen’s) of the first wave (of the 31 July attack). They had reached what had once been the German support line.’

This was Jordan Trench – recently dug as a German line of defence some time after April 1917. 8th Queen’s had actually advanced about 300 yards beyond Jordan Trench but they and 1st South Stafford on their left were forced to pull back because 73 Brigade attacking to the north of them had not been able to keep up.

'We found an old German shelter and brought into it all our wounded that we could find. We carried pocket first aid dressings, but the small pads and bandages were useless on great gaping wounds. You did what you could, but it was mainly a matter of watching them slowly bleed to death …. It came to an end for me sometime that afternoon ….’

(This was 2 August 1917. Presumably, Sherriff must have spent the previous night snatching some rest either in Jehovah Trench or Jordan Trench.)

‘I want you to explore along this trench and see whether you can find B Company …. If you can find them, we can link up together and get some sort of order into things.’

(in fact, it must have been ‘D’ company that Sherriff was ordered to find since ‘B’ company was still in reserve.)

In attempting to carry out this order Sherriff and his runner were struck by fragments of concrete blown off a German pillbox by a German shell somewhere along the red line in the photographs showing the approximate position of Jordan Trench. It was ‘Journey’s End’ as far as Sherriff’s involvement in the war was concerned. Although he was able to make it back behind British lines and have 52 pieces of concrete removed (‘…. one for every week of the year!’ as the Medical Officer said to him) he was sent to hospital in England and did not return to the Western Front.

Keen readers will have noticed that the map at the start of this article and the photographs bear little relationship to the map and the account of the action here in the Official History (2). In my article ‘How, where and when was R C Sherriff wounded in August 1917’ published in the WFA’s ‘Stand To!’, May 2019, I was able to show that the disposition of the 24th Division’s Brigades on 31 July 1917 according to the text (Page 153) and the map (Sketch 14 Battle of Pilckem Ridge Main Attack. II Corps 31st July 1917) in the Official History are incorrect. In fact, 17th Brigade was the most northerly and 72nd Brigade (which included 8th Queen’s and Sherriff’s 9th East Surrey) the most southerly (next to the boundary with 41st Division south of Wervikstraat).

I was also able to show that R C Sherriff’s account of his being wounded, though compressed and lacking in some detail, was essentially correct. His account did not seem to match up with the entry for 2 August 1917 in his Battalion’s War Diary. In fact, there is an error of dating in the War Diary which placed 9th East Surrey’s advance a day later than it actually took place – 1 August 1917.

In short, I discovered that his Battalion’s War Diary, owing to that misdating, had led readers to assume that Sherriff might have been wounded before he had reached the German lines and that the errors in the Official History had put Sherriff’s Battalion (and the Brigade it was part of) in the wrong part of the battlefield, thus adding to the confusion. 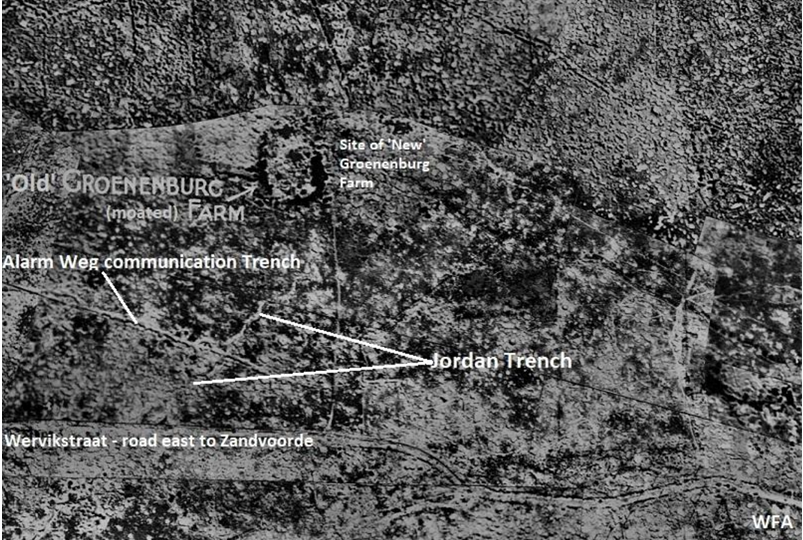 Michael Lucas author of ‘The Journey’s End Battalion – The 9th East Surrey in the Great War’ Published Pen & Sword Books 2012 and Roland Wales author of ‘From Journey’s End to Dam Busters – The Life of R C Sherriff, Playwright of the Trenches’ Published Pen & Sword Books 2016.  for their encouragement of my enquiries into the experiences of R C Sherriff in the Third Battle of Ypres.