Handbook of the 18 Pounder Field Gun

This is the 1913 edition of the British Army Handbook of the 18 Pounder Field Gun of the British and Commonwealth Armies of the Great War of 1914-1919, reprinted with amendments prior to the start of the war in 1914. This field gun was a key piece of artillery in the First World War. The book contains detailed specifications, diagrams and operational protocols.

This rare book was discovered and scanned by members of the Canadian Expeditionary Force Study Group (CEFSG) as part of the MATRIX Project for the use of all persons researching the Great War. The book is from the archives of Branch #136 of the Royal Canadian Legion, Milton Ontario Canada. 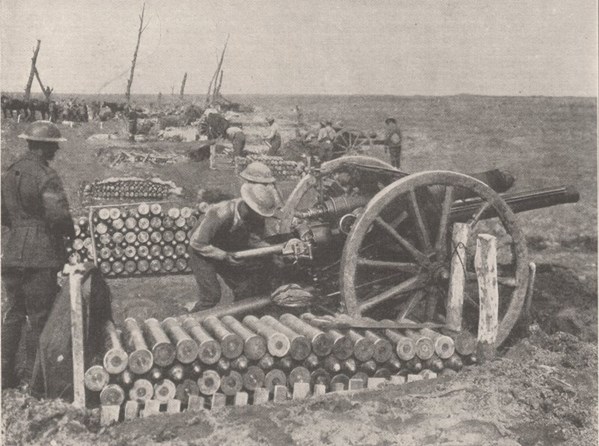 Above: The 14th Battery of Australian Field Artillery, 5th Field Artillery Brigade, 2nd Division, in action near Bellewaarde Lake, in the Ypres Sector. Alongside this position was the famous 'Corduroy', a track, the only one possible, used by all troops moving forward. Completely encircling Bellewaarde Lake, it was continuously under shellfire, and many casualties were sustained by the Australians in its vicinity. Identified, left to right, foreground: Corporal Nixon; Gnr (Gnr) Fosberg (Forsberg?), placing shell in gun (died of wounds a few days after this photograph was taken. Unable to verify this name on the First World War Nominal Roll); Gnr T C Roberts (partially obscured); 7090 Sergeant Richard (Rickard), fitter (extreme right with back to camera); 28314 Gnr J M Bruton (in background, in line with rows of shells, wearing shorts). Source of image and caption: Wikipedia