Kanturk - the Great War Pension Records of a small town

Thanks to the efforts of the Western Front Association, the pension records of over six million surviving soldiers were saved from destruction. These are now gradually being made available for examination. During the war many men were discharged when it was determined that they were no longer physically fit to serve. Such men were paid a pension. As the war came to an end, when men were being demobilized, they were given the opportunity to put forward any disability for assessment by the Ministry of Pensions. Any disability that became apparent only after discharge could also be put forward. Those claims that were made were taken to an assessment board. 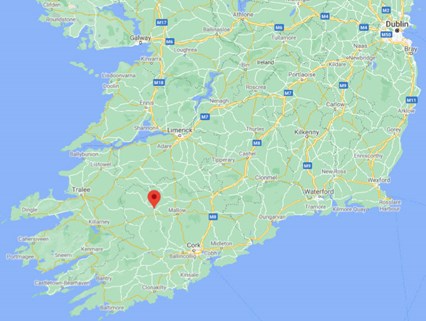 Kanturk town is situated in the northwest of County Cork, in the south of Ireland. In 1914 it was a market town with a population of 1,518. It had a wide variety of shops and services and was linked by rail to Cork and Dublin.

For the purposes of this brief study, the records of forty-four Kanturk men have been examined and of these forty-three served in the army. The pension record cards contain a variety of information. In the case of two men the card merely records the name, number, rank and regiment of the soldier. The date of discharge is noted on thirty-seven cards. Ten were discharged prior to 11 November 1918. For seventeen of the men their year of birth is recorded.

The nature of illness/disability suffered by the soldier is detailed in twenty-nine cases. The amount of the weekly pension is noted in the case of twenty-eight soldiers. In eleven cases the men had one or more dependants. All the Kanturk records fall into Category 5 of pension allocation where the maximum weekly payment was forty shillings. Men had to undergo a regular medical assessment, the results of which determined the amount of their pension.

One of the advantages of these records being made available is that the information contained in the cards can be built upon by using a variety of other sources. 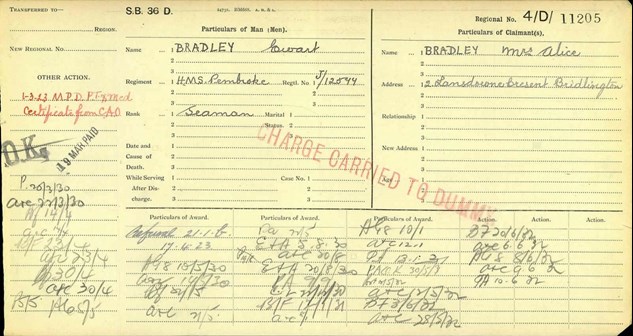 Ewart Bradley gave his address as the RIC Barracks, Kanturk.1 Ewart was born in Hull on 5 December 1895. On his eighteenth birthday he enlisted with the Royal Navy for a period of 12 years. He remained with the navy [serving on HMS Pembroke]until he was invalided out on 17 November 1920, because of a problem with his eyesight.2 His initial payment of six shillings was granted for seventy-two weeks. Bradley answered the British government call for volunteers in 1920 to augment the Royal Irish Constabulary numbers. Their nickname, the Black and Tans, derived from the makeshift uniforms they were issued because of a shortage of RIC uniforms. Bradley was appointed on 6 December 1920 to the Cork East Riding Division and arrived in Kanturk on 17 December. He received a gratuity of £7-16s on 16 December 1921.3 By March of 1922 his pension file had been transferred to Yorkshire. 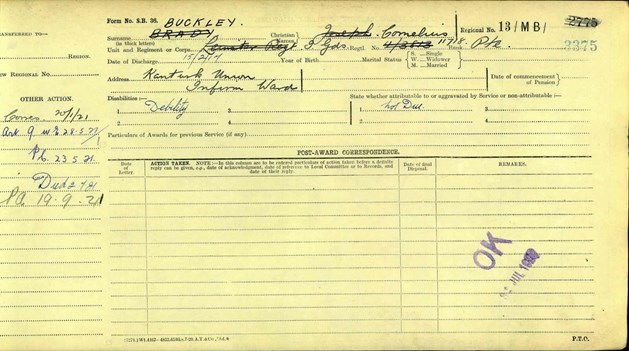 Cornelius Buckley died in the South Infirmary Hospital, Cork, of cardiac failure and arthritis on 9 July 1921. He was aged forty and a bachelor.4

Denis Fitzgerald was awarded the Military Medal in October 1917.

James Foley enlisted with the 9th Battalion Royal Munster Fusiliers, aged nineteen, on 12 January 1915. At the time he was nineteen and working as a labourer. He went to France on 19 December 1915. He was posted to the 1st Battalion on 30 May 1916. He was in trenches at Hulluch near Loos on 25 July 1916 when a rifle grenade exploded, shattering his right fibula and embedding several pieces of shrapnel in his leg. He was taken by hospital barge to St Omer on 27 July. From there he was transferred to the 2nd General Hospital in Manchester where he spent a total of 219 days. He underwent a series of operations. James was discharged from the army on 7 November 1917 as he was ‘no longer physically fit for war service.’ He was described as being ‘a very good soldier and an honest level-headed man.’5 James Foley died, aged thirty-four in Kanturk District Hospital on 22 March 1930. He was unmarried. His death certificate refers to the ‘rheumatism and gunshot wounds received in the Great War.’ In the final two weeks of his life he suffered from a ‘cerebral embolism.’6

The Greaneys were father and son.

In 1911 Richard McCarthy listed his occupation as ‘army tailor.’7

The wedding of Patrick Mullins and Mary McCarthy of Watergate Lane, took place in Kanturk on 9 January 1912. Mary was a widow with two children, Catherine and Madge. Patrick was a drummer with the Royal Munster Fusiliers and based at Tidworth Barracks, Salisbury.8 By 1914 Patrick was back living in Kanturk and working as a ‘town labourer.’ He was also helping to drill the Kanturk Corps of the Irish Volunteers. Patrick re-enlisted aged thirty-nine, with the 8th Battalion Royal Munster Fusiliers at Mitchelstown on 2 January 1915. The Cork Examiner of 7 January 1915 reported that a meeting of the Kanturk Volunteers was held in the Hibernian Hall, Kanturk, on the previous Sunday to pay tribute to their drill instructor Mr. P Mullins 'who had been called away to join the colours.’ Mr. Jeremiah Fitzpatrick, Captain of the Kanturk Corps, stated that Mr. Mullins had brought the Kanturk Corps to:

"A very high state of efficiency, and it was the opinion of all that he had displayed intelligence of a high order as well as constant attention … by his admirable and unassuming manner he had won the highest regard of all members. He thought it was their duty to place on record their high appreciation of abilities and conduct, and hoped same would be appreciated by the authorities".

Given his previous experience as a soldier and as a drill instructor Patrick was promoted to acting corporal in mid-January and to acting sergeant in March. His son Patrick Joseph was born on 27 May,1915.9 Patrick left for France on 17 December 1915 and remained on the Western Front until August 1916. He served in England until June 1917 and returned to the Western Front in June of 1917 having transferred to the 768th Company, Labour Corps. Following total service of four years and forty-three days, Corporal Mullins was discharged on 14 March 1919 due to ill health and returned to Strand Street, Kanturk.10  Patrick Mullins, aged 46, died at his home in Strand Street, from a combination of cardiac failure and bronchitis on 4 April 1926.11 He was described as ‘an ex-soldier.’

Many of the survivors of the Great War carried with them scars, both physical and mental. The forty-four Kanturk survivors were no different. For some their wounds and illnesses were contributing factors in their dying at a relatively young age. Due to the ongoing medical assessment carried out, the continuing payment of a pension would indicate that their injuries and illnesses were continuing to impact on their daily lives. The findings of the 1926 census, due to be released in 2027, should help provide a clearer picture on how the survivors were faring. 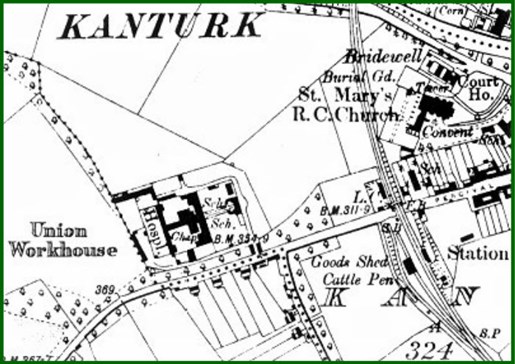 Map showing the Kanturk Workhouse where many survivors mentioned in this article died.

[This article has been reproduced from issue 5 of 'Distant Thunder', the journal of the Irish Branches of The Western Front Association, by kind permission of the author. Whilst he undertook all the research himself, Barry's article clearly illustrates how other historians will benefit from the thousands of hours of voluntary work put in by hundreds of WFA volunteers under the auspices of 'Project Hometown'. All of the WFA's Pension Records held on Ancestry's Fold3 have been scrutinised and more than a quarter of a million records have had their 'Hometown' addresses corrected or added, thus making it easier for historians like Barry to search for all records for soldiers from their selected town or village. Although the project is rapidly coming towards its end, you can read more about Project 'Hometown' here and here. To read about the Ministry of Pensions during and after the Great War, go here.]