[This short profile of the stage, film and later TV actor Basil Rathbone first appeared in a piece by Mark Bristow as 'Seven British actors who served during the Great War'. It appeared in Firestep Vol.7. No.1 The Western Front Association London Branch magazine, all volumes of which are available for access by members using their member login].

With some 5,700,000 men serving in the British army during the Great War it is hardly surprising that very famous names and faces should emerge from so large and diverse a force. As in the Second World War many actors enlisted or were conscripted and, again, many served with great bravery and distinction.

One young officer who served with the Liverpool Scottish Regiment received the following commendation for the Military Cross:

For conspicuous daring and resource on patrol. On one occasion, while inside the hostile wire, he came face to face with one of the enemy, whom he at once shot. This raised the alarm, and an intense fire was opened, but he crept through the entanglements with his three men and got safely back: the result of his patrolling was a thorough knowledge of the locality and strength of all enemy posts in the vicinity. London Gazette, Issue 30997, 5 November 1918, page 36.

Basil Rathbone was born on 13 June 1892, in Johannesburg. His father Edgar was a mining engineer and his mother Anna Barbara was a violinist. Basil had one sister, Beatrice, and a younger brother John, who was killed in action during the Great War.

The Rathbone family returned to England in 1895, where Basil gained an education at Repton School and the inevitable nickname of ‘Ratters’. He displayed his talents early as a dedicated member of both school musical and debating societies and penned a play entitled King Arthur.

Rathbone left school in 1910 intending to become an actor; however, his father insisted that he was employed for a year elsewhere before he did. Rathbone duly worked for one year as a junior clerk with the Globe Insurance Company before auditioning for his cousin Frank Benson, who had founded the Shakespeare Festival at Stratford-upon-Avon. The audition was successful and Rathbone toured Britain with Benson’s Shakespeare Company.

By 1914 he had married his first wife, actress Ethel Marion Foreman, who had appeared alongside him in productions of The Merchant of Venice and As You Like It. In July 1915 the couple had a son, Rodion, who was also to become an actor. 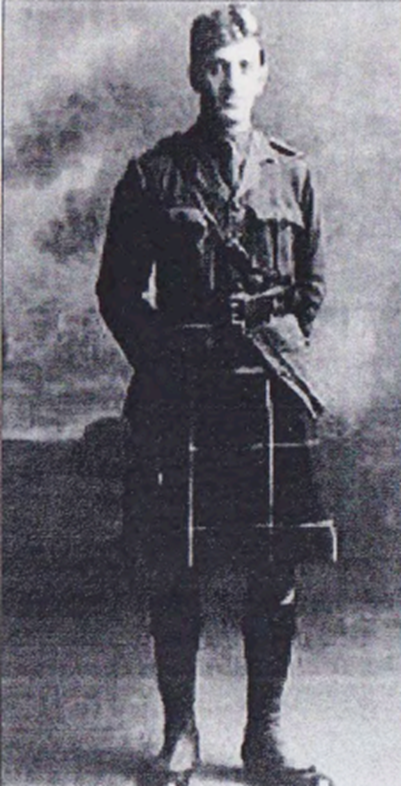 In response to the call to arms of 1915, Rathbone enlisted into the Liverpool Scottish Regiment and went on to serve with distinction in France. Rathbone put his acting talents to the sternest stern test when he disguised himself as a tree to approach as close as possible to the German lines to obtain information. In an interview in 1957, Rathbone related this story to Ed Murrow.

I went to my commanding officer and I said that I thought we’d get a great deal more information from the enemy if we didn’t fool around in the dark so much … and I asked him whether I could go out in daylight. I think he thought we were a little crazy … I said we’d go out camouflaged - made up as trees - with branches sticking out of our heads and arms … we brought back an awful lot of information and a few prisoners, too.

After the War, Rathbone returned home to a vastly changed world. Personal tragedies had to be death with, his mother died, his brother had been killed in action and his marriage had failed, Even so, Rathbone returned to the stage, where he was spotted by film director Maurice Elvey, who in 1921, signed him to appear in two films.

In 1923 Rathbone moved to New York, his career blossomed in 1935 when he appeared as the cruel step-father Mr Murdstone in David Copperfield, produced by David O. Selznick. Thereafter, Rathbone was established as the great screen villian.

In 1938 his reputation was secured when he appeared alongside Errol Flynn in The Dawn Patrol as Major Brand of the RFC, commanding a squadron beset by heavy casualties. He doubtless drew upon his wartime experiences for his performance’s convincing authenticity. 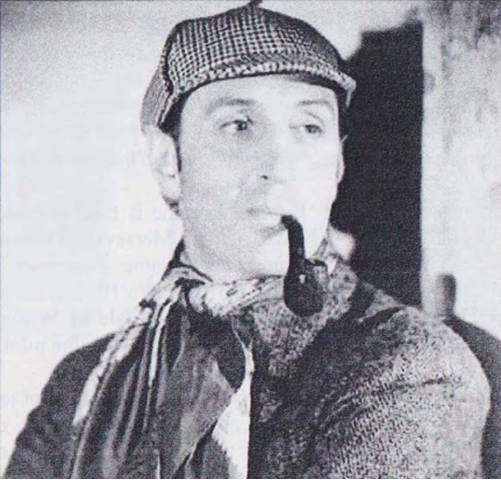 1939 was the year in which Rathbone’s name become synonymous with Sherlock Holmes; the film The Hound of the Baskervilles was released, the first in a series of fourteen. Inevitably, his frequent portrayal of Holmes left him typecast. Nevertheless, Rathbone’s name appeared in lights alongside the other great stars of the sliver screen, including Greta Garbo, Errol Flynn, Marlene Dietrich, Charles Boyer, Claudette Colbert, Gary Cooper, Joan Crawford, Bing Crosby, Tyrone Power, Humphrey Bogart, Bob Hope and Peter Ustinov.

Rathbone continued to enjoy a successful film career throughout the 1950s and into the 60s, when he managed a smooth transition into TV and documentary work. His autobiography In and Out of Character appeared in 1962, Besides recounting events in his personal and professional life, it offered helpful advice for aspiring actors. It was well reviewed, earning praise for its humour and candour, and was acclaimed by the public, The book went into several editions and is still available.

His service to Britain and his brother’s sacrifice contributed to his decision to remain a British subject despite his long residence in the United States. Basil Rathbone died of a heart attack on 21 July 1967 at his home in New York, aged seventy five. His funeral service included reading from Rupert Brooke’s If I Should Die, Think Only This of Me.