On 10 July 1918, Major Edward Mannock, who had recently been appointed to command 85 Squadron of the newly created RAF, heard that his friend James McCudden had been killed in a flying accident. This news seriously depressed ‘Mick’ as he was known, but also motivated him into a killing spree. On top of his already impressive haul, he shot down six German aircraft between 14 and 26 July. In this period he started to take risks and also ignored his own rules. Frequently he would follow a victim down to spray the crashed aircraft wreckage with bullets. 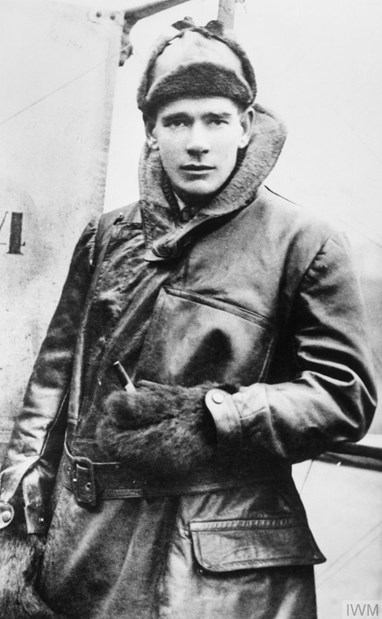 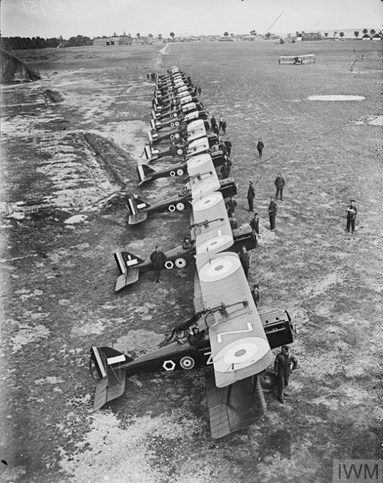 Above: S.E.5a aircraft taken at St Omer Aerodrome. They belonged to 85 Squadron RAF and were photographed on the day the new commanding officer Major Edward 'Mick' Mannock was appointed. (IWM Q 12051) 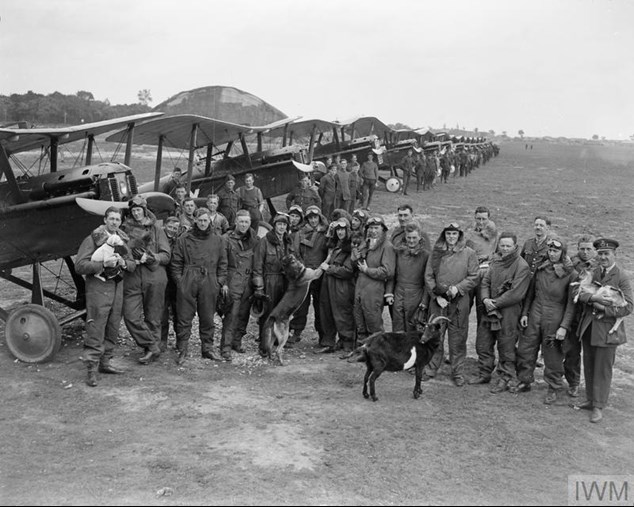 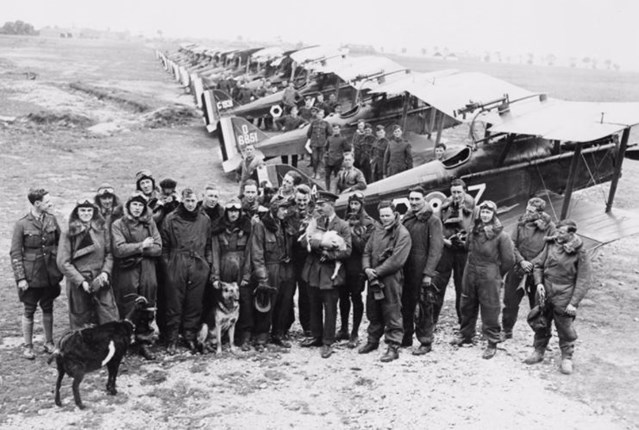 Early on the morning of 26 July Mannock and Lieutenant Donald Inglis took off in a pair of S.E.5a aeroplanes to fly a morning patrol together.

Above: An S.E.5a from No. 85 Squadron, clearly showing the Lewis machine gun awkwardly placed on top of the wing. (RAF Museum)

Above: It is believed this is 2/Lt Donald Inglis (from IWM photograph Q12049)

They had agreed that Inglis - who was a novice and who was still to shoot down his first enemy aircraft - would be helped by Mannock who would attack first, with Inglis coming in behind to finish the enemy off. 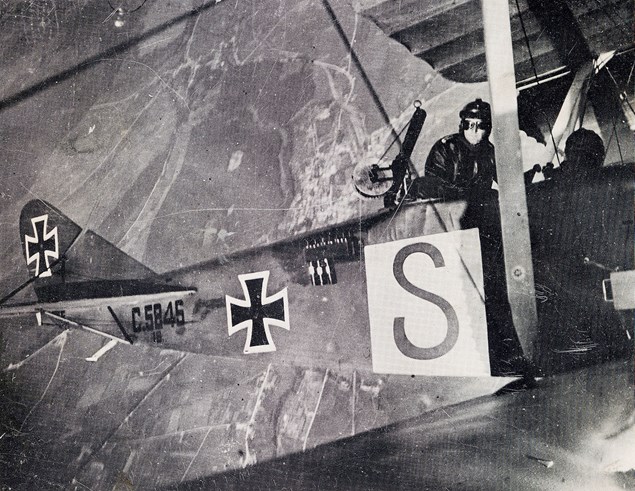 Above: DFW C.V (s/n 5845/16) banking in early morning sunlight. Note the Aviatik trademark on strut, and flares in holder behind observer's cockpit

He killed the observer and climbed away, letting Inglis come from underneath, firing into the fuel tank. The German plane burst into flame and crashed. The crew members, Sergeant Josef Hein and Leutnant Ludwig Schöpf, were killed.[1][2]

The two S.E.5a aircraft flown by Mannock and Inglis were now very low over the ground. Mannock circled the burning wreck twice. Then, as Inglis was to later write in a combat report:

“I saw Mick start to kick his rudder and realised we were fairly low, then I saw a flame come out of the side of his machine; it grew bigger and bigger. Mick was no longer kicking his rudder; his nose dropped slightly, and he went into a slow right-hand turn round, about twice, and hit the ground in a burst of flame.”

Mannock’s S.E.5a had been brought down by groundfire. An ignoble end to one of the foremost British aces of the war. It is important for what was to be subsequently investigated to bear in mind the crash took place behind the German front lines and not in No-Man’s-Land.

Inglis’s S.E.5a was shot damaged, and he crash-landed in the British lines, crying out: “The bastards killed my major. They killed Mick.”

It is certain some unknown German soldier buried Mannock after first retrieving his ID discs, pistol, notebook and other personal effects, which were returned to his family after the war.

Elsewhere, just to the west of the crash site, British soldiers in the front lines at Pacault (mid-way between Bethune and Merville) were given a ‘grandstand’ view of the same dogfight.

One of the observers left an account of the action. Private Edward Naulls (2nd Battalion Essex Regiment) was in the trenches near Pacault Wood.

"I was with D Company, 2nd Battalion of the Essex Regiment, on the Lys sector of the front. Stand-down was at 5 a.m. Shortly afterwards a 'Jerry' [aircraft] appeared over no-man's-land. A little while later two British fighter 'planes arrived and engaged the Jerry in combat…. A few bursts from their guns sent it crashing in flames towards Merville, near Lestrem, at La Croix Marmuse. “

"… Mannock dived to within 40ft of the ground. I think this is a fair estimate because the trees in Pacault Wood were not more than 30ft high and Mannock's 'plane cleared them by a few feet. Inglis circled at about 100ft. Suddenly, there was a lot of rifle fire from the Jerry trenches and then a machine-gun opened up. I saw tracers enter Mannock's engine on the port side. In a few seconds a tiny bluish-white flame spread, enveloping the engine and cockpit, then a cloud of smoke and flame.

"With the propeller still turning the 'plane went down in a long glide and crashed in flames beyond Pacault Wood near La Pierre au Beure. A great column of black smoke shot up. Inglis started to climb away but his engine stalled —I distinctly heard it splutter twice before it stopped — and he forced-landed behind the front line near St Floris."

This account, and that of Lt Donald Inglis, suggests Mannock was shot down somewhere to the south of Calonne-sur-la-Lys, apparently near La Pierre au Beure (some accounts use the spelling 'Beurre' but to be consistent in this article we will use 'Beure'). This location is to become a point of contention as we will see. The Track which is key to the geography of the subsequent mystery is known as "Butter Lane” on British Trench maps. 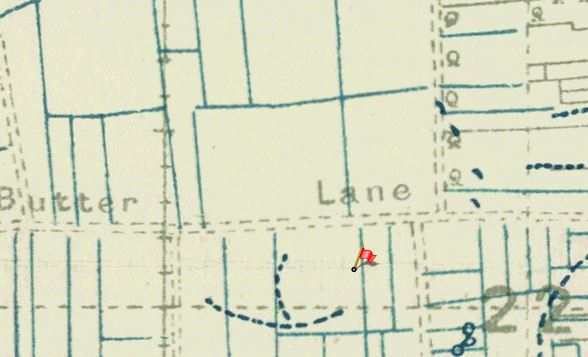 Above: Butter Lane (Map courtesy of Great War Digital) The red flag is the point '36a Q22a 5.1' mentioned below.

The Germans subsequently provided a grave location, but their description – and later reports by the Imperial War Graves Commission - have caused great confusion and debate.

An Intelligence Officer of the German Sixth Army stated that: "… Mannock, 85th Squadron RAF, was shot down on 28 July, 1918 [it was actually the 26 July]. Machine crashed in flames. Body recovered and buried 300m NW of La Pierre au Beure on the road to Pacault."

As it would turn out, what is now widely assumed to be Mannock's original field grave had already been found and its then unknown occupant re­buried elsewhere. This grave was located at a map reference 36a Q22a 5.1 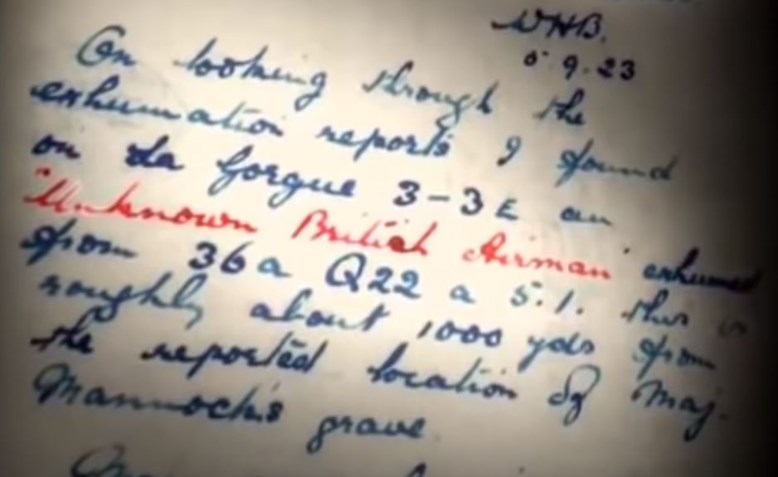 In 1924, a Common Wealth War Graves member of staff wrote "an unknown British aviator is shown in exhumation reports for Laventie Military Cemetery... and was exhumed from [Butter Lane] identified by a cross and wreck of 'plane. No date of death is stated". This report is important in that it links the burial (Plot 3, Row F, Grave 12) at Laventie Military Cemetery with the exhumation at 36a Q22a 5.1 on Butter Lane. This map reference (36a Q22a 5.1) on Butter Lane is shown below by a red flag on the map below. 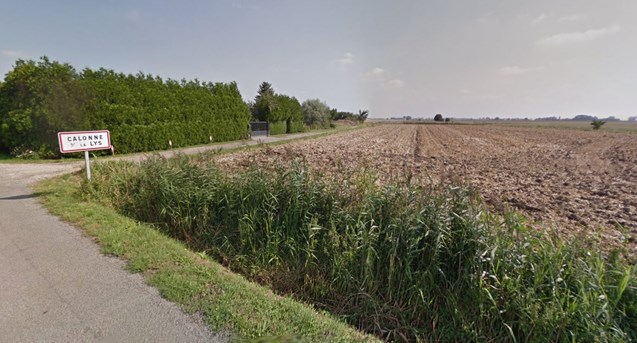 Above: the track running off in front of the hedge runs north-eastwards from the approximate site of 'Hun Farm' on the trench map towards the alleged location of 'La Pierre au Beure'. The track in due course becomes 'Butter Lane' . 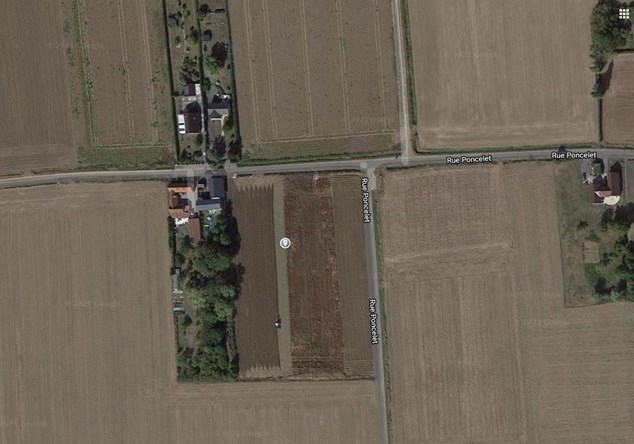 The crux of the problem here is the phrase "300m NW of La Pierre au Beure on the road to Pacault” does not match the coordinates of the ‘unknown airman’. So these must be two different pilots? 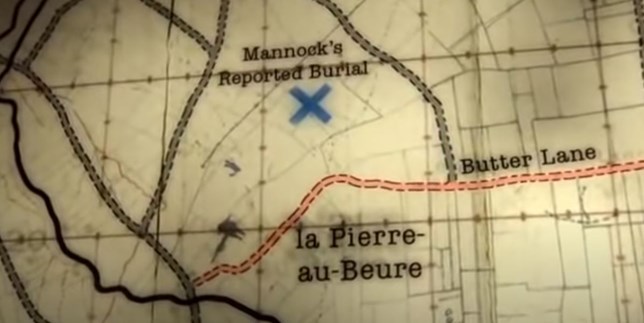 Above: The blue cross marks the position that the IWGC believed Mannock was buried by the Germans. It is in what was at the time No Man's Land

Much has been written about this conundrum. Andy Saunders has written extensively on this.[3] Also a BBC Timewatch documentary first broadcast in 2009 ('Aces Falling') featured the story (a short clip of this shown towards the end of this article).[4]  The analysis below is a much pared down version of the investigation undertaken by Andy Saunders which it is hoped will give a brief background to the mystery, readers can then go much further into the story if they wish. 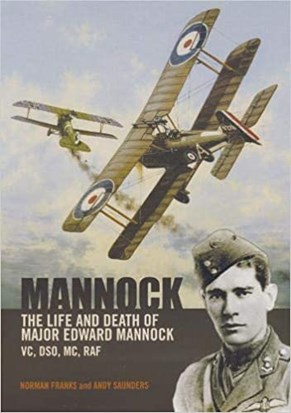 The main issue is that 'NW of La Pierre au Beure' is not (according to the British trench maps) 'on the road to Pacault'. Both the Germans (specifically the writer of the report) and the British (the IWGC) assumed La Pierre au Beure was an exact location. Perhaps the IWGC assumed it was the name of the hamlet. It is not. It is in fact a general ‘area’ rather than specific place.

As the IWGC assumed La Pierre au Beure was specifically and accurately shown on the map they were using, their interpretation of the German report “300yd north­ west” placed the wartime burial not only no-where near the location of the ‘unknown airman’ but actually in No-Man’s-Land. Clearly the Germans would not risk casualties to bury someone in such a dangerous position, but would be content to bury the body behind their own lines.

German trench maps have "La Pierre au Beure" printed somewhat to the east of where it appeared on British maps. If one takes the starting point from a German map, then “300yd north­ west” of that point gets you more or less to the location 36a Q22a 5.1 where the ‘unknown aviator’ had been found "on the road to Pacault".

So basically there would seem to be two different versions of the same map. The key words “La Pierre au Beure” are in a different place on the British map to the German version. 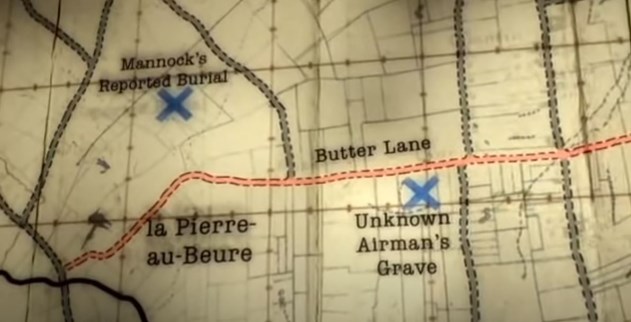 Above: The second blue cross is the position that the body was found and exhumed from which now lies in Laventie Military Cemetery 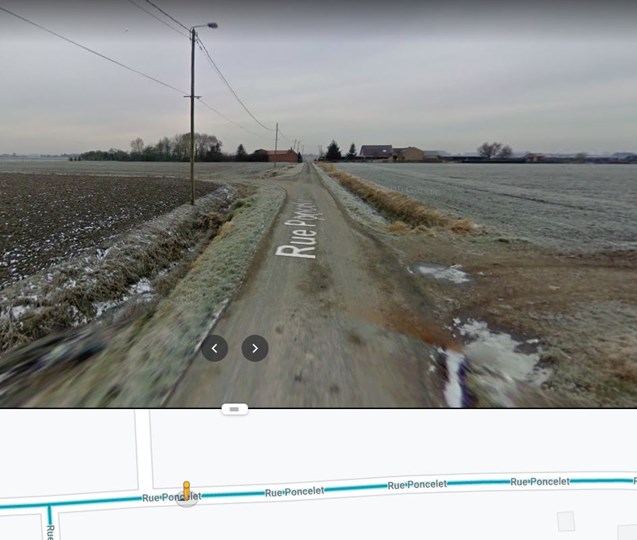 Above: A screen-grab from Google Street view showing the position of the body that was exhumed shortly after the war. The location is either in, or immediately in front of the trees just left of centre. The image is looking west on 'Rue Poncelet' which is the French name for what was known as 'Butter Lane'.

The short three-minute clip from the BBC 'Timewatch' documentary below may be of interest to help explain the map-reading issues that have resulted in Mannock still being one of the thousands of 'missing' from the Great War.  The 'Andy' mentioned is Andy Saunders.

To watch this short clip, just click on the image below.

Mannock's name remains engraved on the column to the missing of the RFC, RNAS and RAF at Arras. 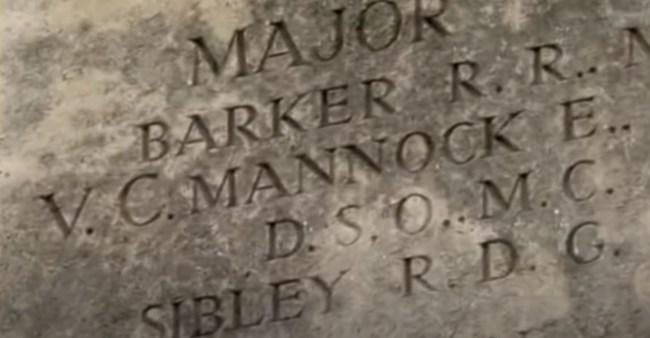 Above: Mannock's name on the Arras Flying Services Memorial 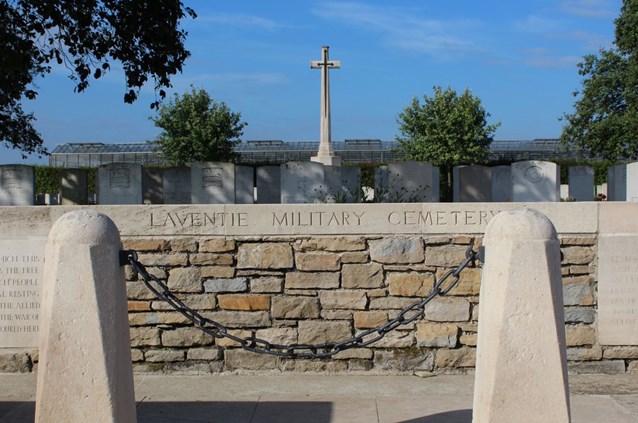 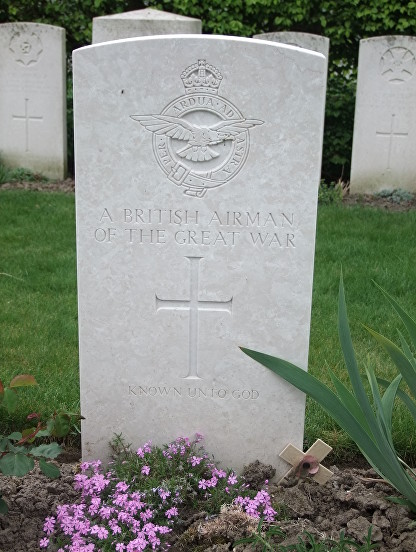 Above: The grave at Laventie Military Cemetery

[1] The German Loss report reads as follows: 'The crew started on 26.7.18 at 5.45 o’clock with DFW C.V [numbered] 2216/18 for artillery-shooting. As a result of low clouds, the aircraft flew at low altitude and was attacked by a hostile single-seater at 6.39 o'clock, which surprisingly crashed out of the clouds, and crashed in the course of the aerial combat at La Croix Marmuse southwest of Lestrem. The crew was dead immediately; Plane destroyed. According to the troops, a short time later the enemy single-seater was shot down burning - apparently by ground fire.'

[2] Sergeant Josef Hein and Leutnant Ludwig Schöpf are buried in Billy-Berclau German Military Cemetery. Billy and Berclau are separate localities about 1.5 kilometres apart, some 27 kilometres north-north-east of Arras, and about 5 kilometres south-east of La Bassee, a small town on the Bethune-Lille road. Billy-Berclau German Military Cemetery is located on the Rue de Général de Gaulle. There are 1,683 German soldiers from the First World War buried here.

[4] The full hour long documentary can be found in several places on YouTube.