Max Immelmann – the ‘Eagle of Lille’

The first German air ace of the war was Max Immelmann – known as ‘Der Adler von Lille’ – ‘the eagle of Lille’. Over a period of just over a year, he would claim 17 victories until his death on 18 June 1916.

Above: a commemorative coin

Born in Dresden on 21 September 1890, Max enrolled in Dresden Cadet School in 1905. By 1912, he had left the army to study mechanical engineering and on the outbreak was called up to serve in the army. By November 1914, he was training as a pilot. 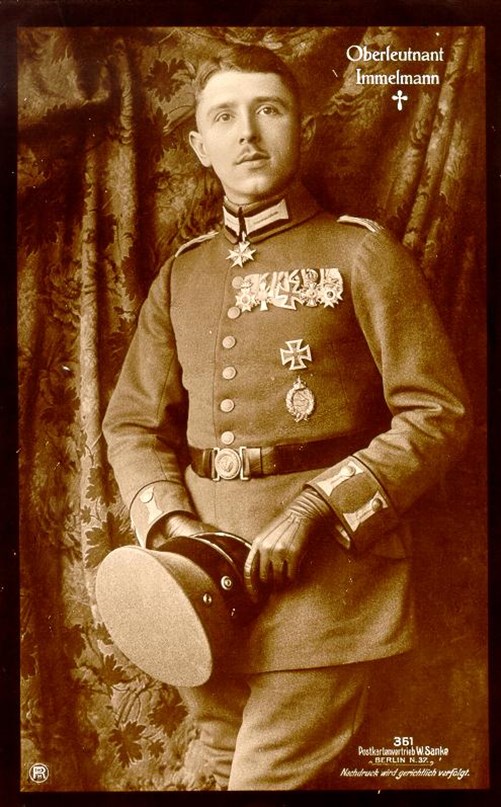 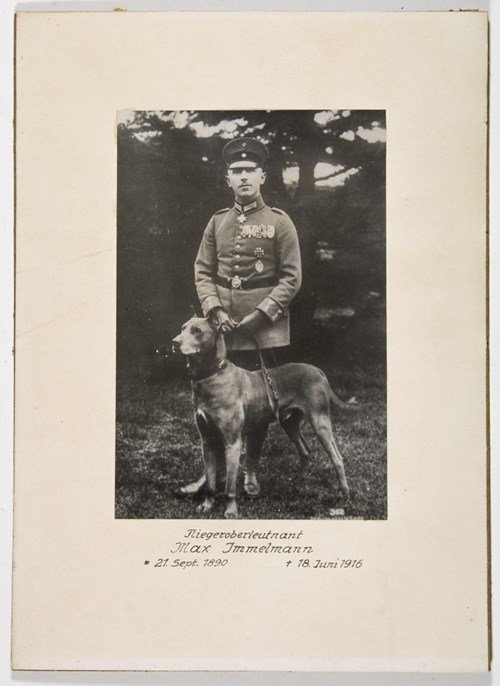 Above: Max Immelman. Photo – dhm.de And pictured with his dog.

By February 1915, he was serving in a Feldflieger Abteilung (Flying Section) initially in Section 10 but later in 62. But throughout this period, Max was piloting an unarmed aircraft, the LVG.B.I. On 3 June 1915, he was shot down but was able to land his aircraft behind German lines. For this feat, he was awarded the iron Cross 2nd Class. 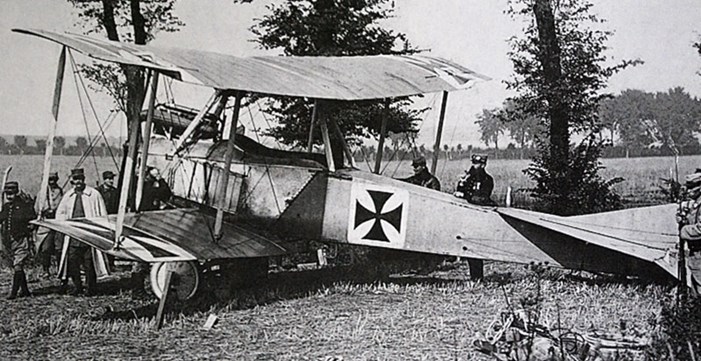 Above: an LVG. B.I reconnaissance aircraft

In June 1915, things would change when two Fokker Eindecker E.I fighter aircraft were delivered to his section. The first of these went to Oswald Boelcke, with Immelmann getting the second. 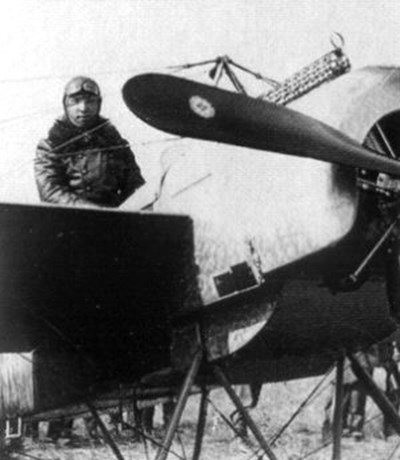 Above: Immelmann and the Fokker E.I

Boelcke and Immelmann appeared to be good friends but at the same time, they were also rivals when counting victories. 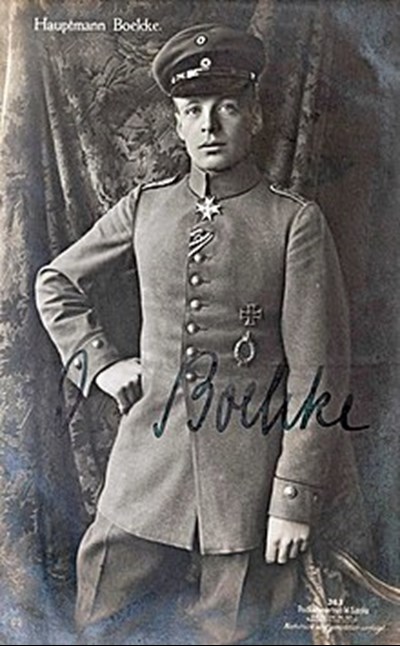 Immelmann was said to be the inventor of what was called the ‘Immelmann turn’ - a simultaneous loop and roll that would become a standard dogfight manoeuvre, although Immelmann would later state that ‘he did not employ any tricks when attacked’. 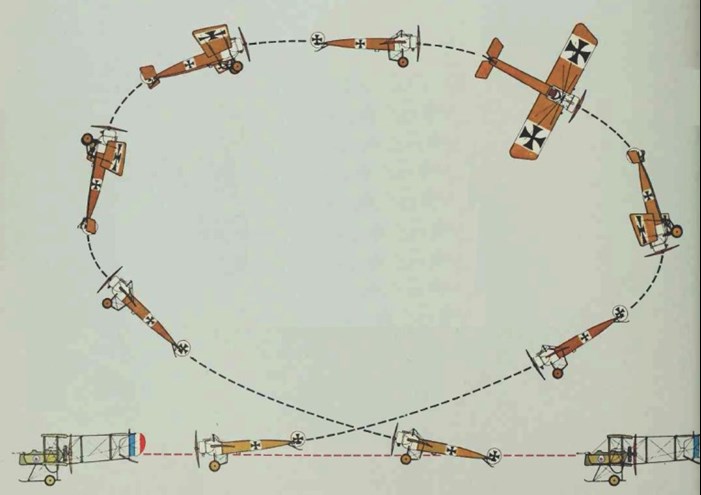 Above: an illustration of the ‘Immelmann turn’ manoeuvre. Photo –militaerwissen.de

A newspaper would later provide a comment from a British airman:

…” Immelmann – you could tell him anywhere by his manoeuvring. His game was to keep above his opponent, to manoeuvre him towards the German lines, and then suddenly to swoop down behind his victim, emptying his drum of ammunition as he swooped. The swoop always carried him back to his own lines”. (Dundee Evening Telegraph 3 February 1916.)

Not all of Immelmann’s victories resulted in the deaths of his opponents. His third victory on 21 September 1915 would however cause the death of Lieutenant Stanley Winther Caws, a native of the Isle of Wight who had emigrated to Canada. He enlisted in the CEF in February 1915 but was later transferred to the Royal Flying Corps. He is commemorated on the Arras Flying Memorial. His observer, Lt William Sugden Hodgson-Wilson was wounded in the encounter and taken to hospital. 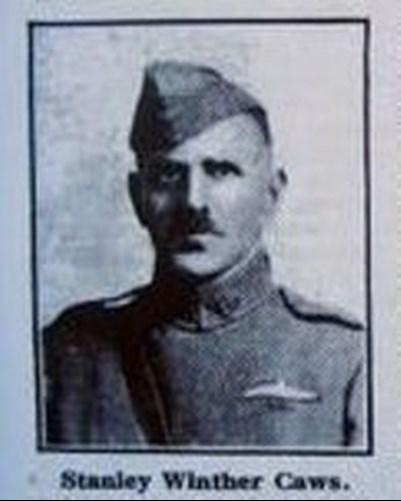 In October 1915, he would claim a further victory (his 4th) which resulted in both the pilot and observer being wounded, Lt. John Gay later dying of his wounds on 10 October 1915. Gay was initially buried by the Germans, with his grave later being relocated to Cabaret-Rouge Cemetery at Souchez.

Immelmann’s 6th victory on 7 November 1915 would claim the lives of Captain Theodore Dowson Adams and Lt Owen Vincent Le Bas. Captain Gordon Bell, flying a Bristol Scout, was accompanying Adams and Le Bas on a reconnaissance sortie. At 2.45pm, they spotted a Fokker and an Aviatik over Douai. Bell engaged the Fokker which dived, as if hit. He then fired on the Aviatik before it broke away. Looking around for the BE2c, Bell saw it spiralling down to the ground. He could only watch helplessly as both the Fokker and the Aviatik landed close to the crashed aircraft. 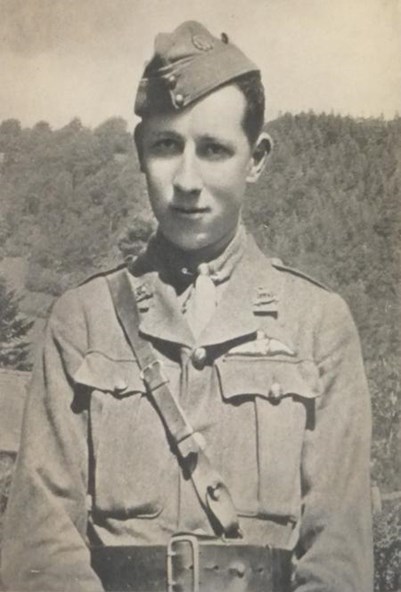 The graves of both Adams and Le Bas were initially located in a cemetery in Vitry-en-Artois but were later relocated to Brown’s Copse Cemetery, at Fampoux. 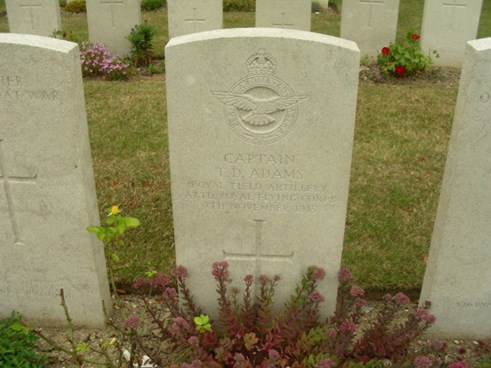 Above: the headstone for Captain Theodore D. Adams in Brown’s Copse Cemetery, Fampoux.

In December 1915, two further lives would be claimed by Immelmann in his seventh victory when 2nd Lt. Alan Victor Hobbs and Captain Charles Edward Tudor-Jones of 3rd Squadron were killed over Valenciennes. Both are buried in Raismes Communal Cemetery. The obituary for Tudor-Jones in the Law Gazette would note that his family had the unique distinction in being able to name the German soldier who had killed him. 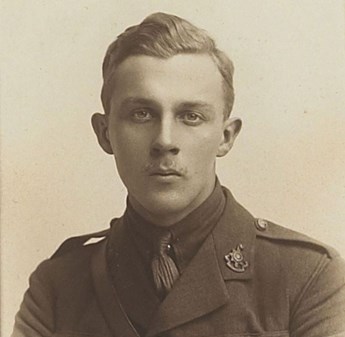 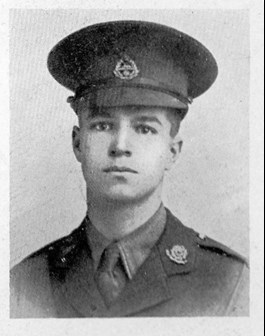 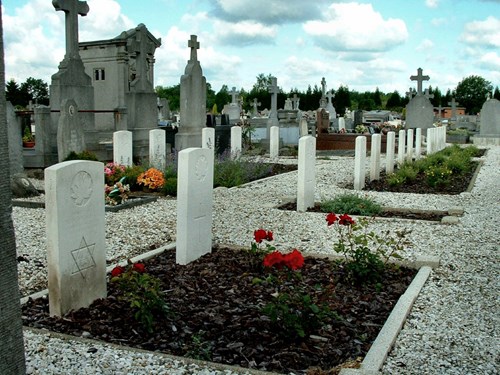 Immelmann’s eighth victory on12 January 1916 claimed the life of Observer 2/Lt. Sidney Cornelius Hathaway. The London Standard would later report that 2/Lt Hathaway was missing but by the end of the month, he was reported as ‘unofficially killed’.

Following this, Immelmann and Boelcke (who also had achieved 8 victories) were awarded the highest German decoration ‘Pour la Merite’, nicknamed the ‘Blauen Max’. 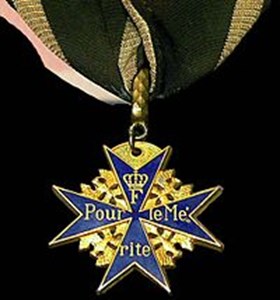 Above: the German award ‘Pour la Merite’, known as ‘the Blue Max’.

In February 1916, reports appeared in the British press that suggested that Immelmann had been killed under headlines ‘Is Immelmann dead?’ It may well be that the headline simply reflected that from 12 January until 2 March 1916, Immelmann had not claimed any victories. But March 1916 would in fact be Immelmann’s best month, with five victories.

The first of these was on 2 March 1916 - his ninth victory. Observer, Lt Herbert Frederick Birdwood was killed and Pilot 2/Lt Charles Walter Palmer was wounded. Lt Palmer’s foot was amputated in a German hospital but he later died of blood poisoning on 29 March 1916. 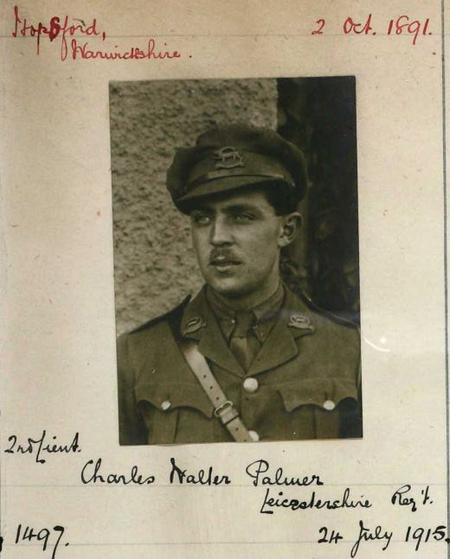 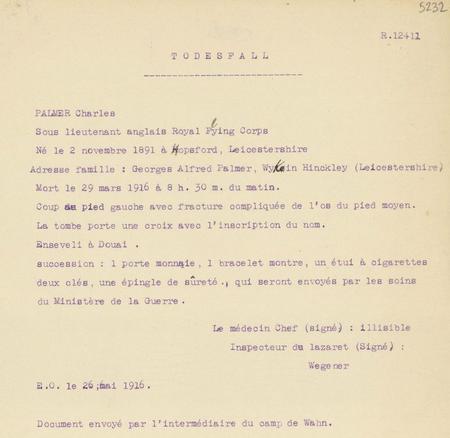 Above: the document that detailed the death of Lt Charles Walter Palmer.

Later in March, Immelmann would achieve two victories on the same day. By the end of the month, Immelmann’s and Boelcke’s tally of victories was evenly matched – both had achieved 13.

By now both Immelmann and Boelcke were flying Fokker E.IVs. On 25 April 1916, Immelmann had a near miss when he took on a pair of Airco DH.2 biplanes, suffering several shots into the fuselage of his aircraft. In early May, he was forced to crash land after his own guns had damaged a propellor blade.

The end for Immelmann came on 18 June 1916 although in the airfight with planes from 25 Squadron, two British planes were brought down. Flight Lt Clarence Elias Rogers and 2/Lt. John Raymond Boscawen Savage were both killed. 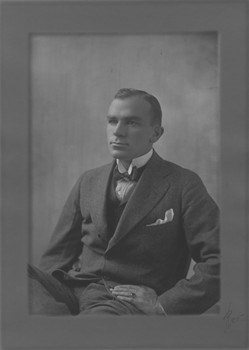 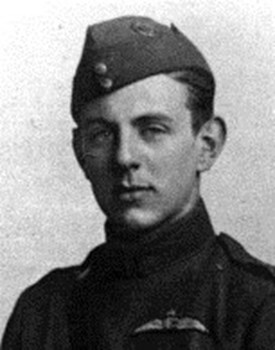 Whilst there is some dispute as to the cause of Immelmann’s death, 2/Lt George Reynolds McCubbin, flying a FE2b, is generally credited with the victory, along with his gunner, Corporal James Henry Waller (who actually fired the shots). Newspaper reports on the death of Immelmann simply referred to ‘Lieutenant McC’ and ‘Corporal W’ – their identities only became public when revealed in Parliament in July 1916.

However, the Germans disputed this version and claimed that the synchroniser gear had failed and that Immelmann had shot off his own propellor. A third version is that Immelmann’s aircraft was damaged by groundfire. Numerous reports of Immelmann’s death appeared in British newspapers in the following days. 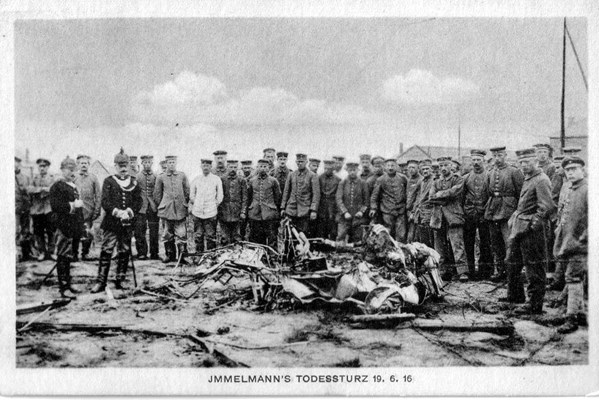 Above: the wreckage of Immelmann’s aircraft

McCubbin was awarded the DSO and Waller the DCM. 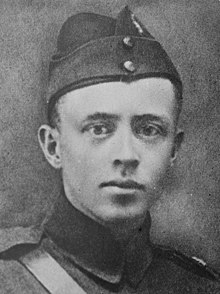 McCubbin was badly wounded in the arm during this encounter but recovered in hospital. 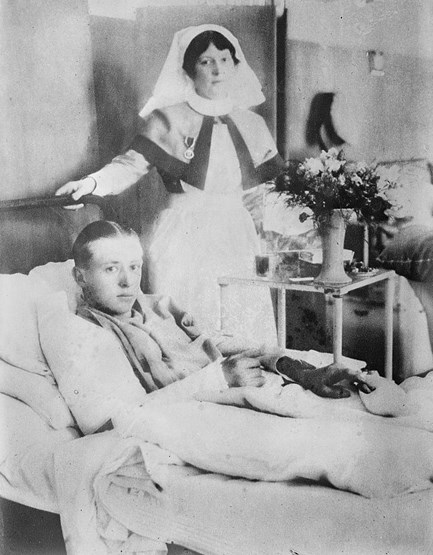 Above: 2/Lt. George McCubbin pictured recovering in hospital from his wounds.

He was promoted to Lieutenant in September 1917 and later to Captain in 1918, surviving the war.

In Germany, Immelmann was given a state funeral and buried in his home city of Dresden. His body was later exhumed and cremated, with a memorial erected in the Tolkewitz Cemetery in Dresden. 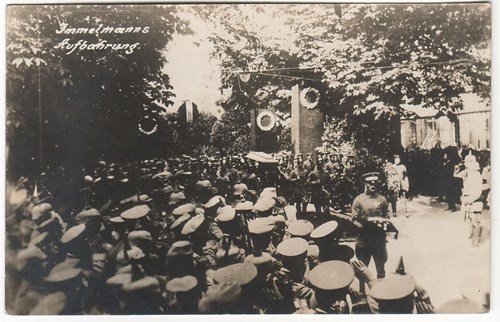 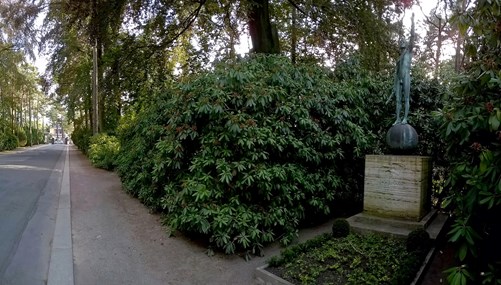 Above: the funeral procession and the memorial in Tolkewitz Cemetery in Dresden. The figure of ‘Der Adler von Lille’ was later stolen.

Immelmann’s great rival, Boelcke, was grounded by the Kaiser for a month immediately after Immelmann’s death to ensure that he did not suffer the same fate as Immelmann. During this period, Boelcke formalised the rules of air fighting in the ‘Dicta Boelcke’ and is also credited with training the German air ace, Manfred von Richthofen.

In a cruel twist of irony, Boelcke perished on 28 October 1916 in a mid-air collision with a German aircraft. Prior to his funeral at Cambrai Cathedral on 31 October 1916, the Royal Flying Corps dropped a wreath with the words ‘To the memory of Captain Boelcke, our brave and chivalrous opponent’. He was buried in Dessau Cemetery. 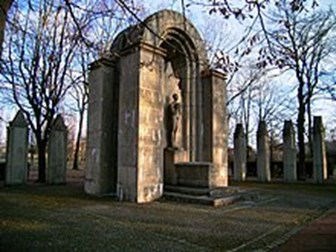 Above: the tomb of Captain Oswald Boelcke in Dessau Cemetery