These Memorial Windows were designed and created by Caroline Benyon, Fellow of the Master Glass Painters.

They are a First World War Memorial to the Portuguese, and they are to be found in the Roman Catholic Church of St James, 61 Pope's Grove, Twickenham.
The window to the right commemorates the humanitarian work of Dom Manuel II, the last King of Portugal, and a member of the Parish of St James, Twickenham, from 1913 to 1932, when living in exile at Fulwell Park.
At the outbreak of War, The King placed himself at the service of the British Red Cross, and toured hospitals throughout the United Kingdom. Thanks to his own efforts, an Orthopaedic Military Hospital was opened in Shepherd's Bush in 1916. His name is also associated with the Hammersmith Military Hospital and, above all, linked to the adoption of a new orthopaedic treatment method, which had been followed on the Continent. 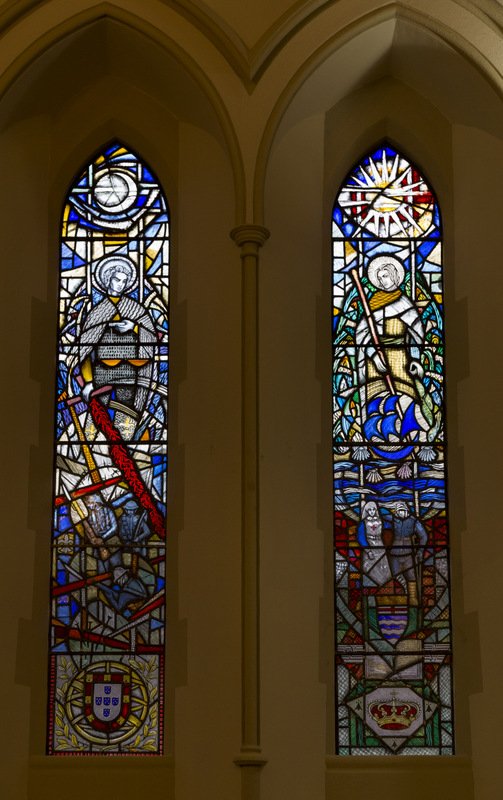 This window depicts the Archangel Raphael, who healed the father of Tobit, surmounted on symbols of the healing work of the King. In the centre of the window is a Caravel, a Portuguese ship developed in the 15th Century, and the cipher of the Anglo-Portuguese Society, to reflect the financial support given by the Members of the Society.
The window to the left is in honour of the Portuguese who fell in the First World War. Between 1914 and 1918 more than 100,000 Portuguese Troops went to war. They fought in Africa and in Flanders, suffering nearly 40,000 casualties. Almost 12,000 men died, including Africans from both Angola and Mozambique serving in its Armed Forces.
When the Battle of the Lys broke out on 9 April 1918, two depleted Portuguese Divisions, wanting in men and officers, had to take on nearly 10 German Divisions, (8 German Divisions spread over three successive lines of attack and another 4 German Divisions held in Reserve.)
In this window, the Archangel Michael, who drove Lucifer from Heaven, surmounts symbols of the War. The small fleurs de lys, bear several allusions, including the name of the battle itself.
These Memorial Windows were dedicated by His Excellency Manuel Lobo Antunes, Ambassador of Portugal, and by Field Marshal the Lord Guthrie, on Monday 9 April 2018, to mark the Centenary Anniversary of the Battle of the Lys. They were Blessed by The Right Reverend John Wilson, Titular Bishop of Lindisfarne.
St James Church, Twickenham was opened by Cardinal Edward Manning in 1885. King Manuel and Queen Victoria of Portugal came to the Parish in late November 1913 and they lived at Fulwell Park. They regularly attended Mass at St James's occupying places in the alcove where the present organ is situated.
The King and Queen were Godparents to many Confirmation candidates in the Parish. King Manuel died suddenly in 1932 as the result of a throat infection which was not treated properly. Queen Victoria returned to Germany soon after and she remarried and died in 1966.
Various silver altar vessels left to the Church by the King are still in use. The Queen also passed on to St James's Church the musical organ which the King played. This was in use until the 1980s
For further information on Portugal's contribution to the Allied  War effort please view our website: www.memorialsforakingandacountry.co.uk
With thanks to Bernard Hornung for providing this article.