I have never seen it mentioned anywhere that 'C' Company 2nd Leicestershire Regiment made an attack on the enemy trenches on March 10th 1915 at Neuve Chapelle.

We were told what was to happen on the evening of 9th March. A big bombardment was to take place on their trenches early on March 10th and we were to attack 8.00 a.m. prompt. The C.O. Capt. Weir called for volunteers to carry messages, and we understood any of us getting through with our message would be rewarded. I had been C.O.'s runner for a long time, so I was first to volunteer: then five more were picked. Captain Weir then said "I will send you first Dixon, then the others as follows .... if you get killed off. If any of you wish. to drop out, do so now as it's going to be dangerous job." However, nobody dropped out, so was left at that. 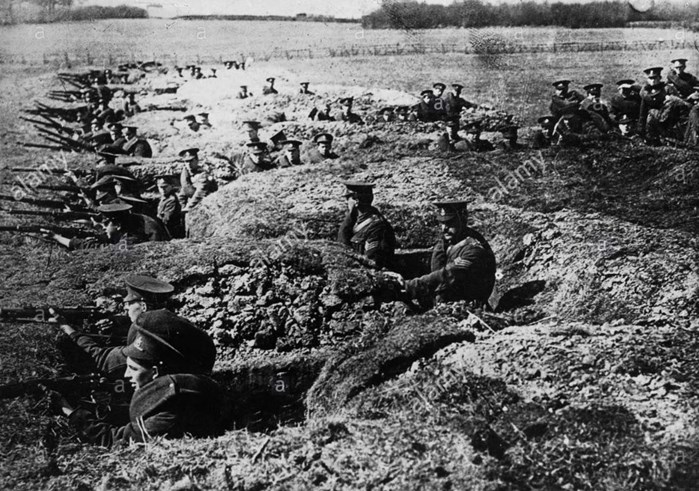 I shall never forget the morning of March 10th. After a sleepless night, I was out at the front line. Captain Weir was a few feet away, and I was watching Colonel Gordon with his watch in his hand. He was shaking like a leaf as the minutes ticked away, then he shouted "charge" at exactly 8.00 a.m. Captain Weir shouted "come on Dixon" and climbed the ladder to get out of the Trench. I followed at once and we scrambled, over our own barbed wire entanglements and made for the enemy. We had orders to ignore their main trench, which would later be attacked by support forces, and we were to advance as far we could.

There was no opposition as we jumped over that Jerry trench, but I could see a number of Germans crouched in the bottom of the trench they had had a battering most of the night.

I stuck to Captain Weir until we were both tired out. He then said "I think we will stay here and dig in; pass that down the line. But I said, there is no line; there has only been you and me from the start". I looked round and there was nobody but us two. I had got a few Yards in front of Captain Weir and saw a partly dug trench, so I pointed it out to him, and we decided to work on that. He then said how far do you think we have come?" I said "almost a mile", so he said: Go straight back to Colonel Gordon and say we have advanced about three-quarters to one mile, and we want some reinforcements." Then he surprised me by holding out his hand and saying "Goodbye Dixon". I shook it and said "Goodbye Sir , I then turned round to plot my way back, and that was the last I saw of him.

How different; a plot of land looks when you have seen it from one way and then turn round and look at it front to back At last I spotted the stump of Richebourg St. Vaast Church, and knew if I made for that I could find my old trenches and Colonel Gordon.. 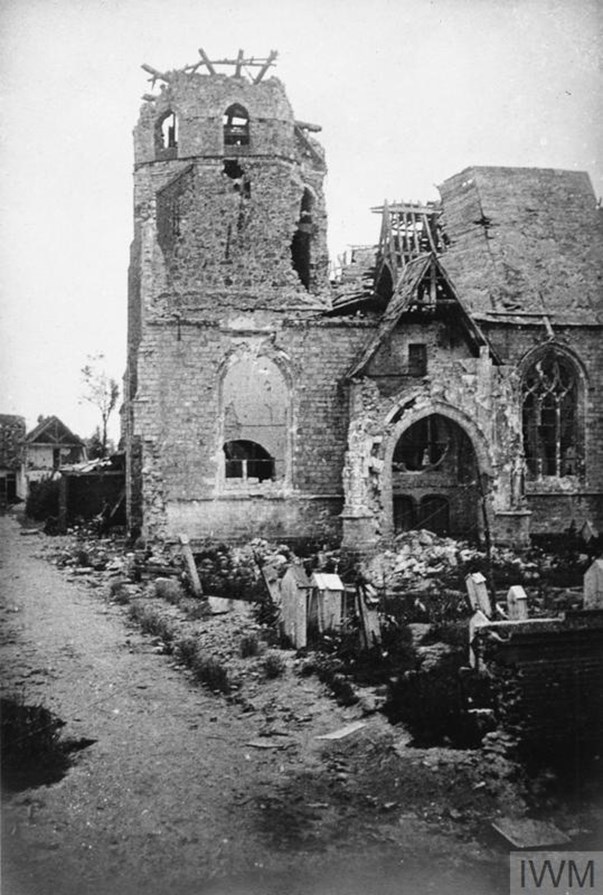 Above: The ruined church at Richebourg-Saint-Vaast, wrecked by the Germans, probably 1915. IWM Q81621

There were lots of bullets coming from somewhere as I plodded along in the snow and sludge, and I could not travel very fast under those conditions with my equipment, and rifle. However I kept going thinking one of these will get me yet; but I was lucky to drop straight into the trench from where I had started out, and I found Colonel Gordon. I gave him the message exactly as Captain Weir had told me and Colonel Gordon said "Go straight back to Captain Weir and tell him to hold the position at all cost - and we have no reinforcements. Off you go" (My thoughts then are unprintable). I think the Colonel dived back to his dug out,

As I went to get up that ladder once again and my hands reached the top rungs, a machine gun opened up from the enemy trench we had left alone: they were waiting for me: no doubt they realised I was carrying messages. Something told me I was not going to get back safely this time as I dropped back into the trench to wait a bit: and if there was ever a time when I felt like being coward, it was just then. I didn't want to go on but I thought if I don't go I shall be shot by own side as a coward, so I may as well go and chance it. So I plucked up courage, and went as fast I could, even though I was tired out. As I passed that first German trench again I saw several men together, but one in particular as carefully taking aim at me, the others looking on. I heard the bang as he fired , and I felt the bullet go through my knee joint like a red hot needle. My leg just stopped and I fell full length with my face in the sludge. Ill try to cut this story short -- I had. gone off unconscious, no doubt but I awoke to realise I was being fired on again and a German Officer was firing at me from a communication trench. Two bullets hit the ground each side of my head and I kept perfectly still thinking he'll get me next time" , but he dare not expose himself too long, and no doubt thought he had done enough at me so he went away. I laid there all day until about 6.30p.m. when I was found by a stretcher bearer party from a Scottish regiment.

They asked me if I was wounded: I said "Yes I have got a bullet in my leg". So they dressed it and said "can you walk?". I said "yes, where is the nearest dressing station?" They pointed it out to me and helped me up, but I fell down immediately again: I could not even stand; so they put me on a stretcher and took me off. I didn't wake up properly until the next day when a nursing orderly told me: "you are lucky, the doctor has marked you for Blighty!". I had been washed, wound dressed, shaved all over and de-loused, and had. not felt a thing: I was tired out.

I never got back to my own regiment and was no doubt reported as "missing believed killed" so no reward came my way, but I was still alive and that meant more than decorations.

I woke up next time on board a ship and was told we were on a Red Cross ship crossing the Channel to England if we could dodge the German submarines. I slept again, and woke up, one of many stretcher cases side by side, and was told I was in a Manchester street. A number of people were going up and down the row, and I heard one lady say to another, "Look at this one (meaning me) he is only a young boy."

I cannot express my feelings at knowing I was back in England safely. After a very long stay in hospital I was passed as fit again, and eventually found myself in Mesopotamia. I was not much good there: my leg would not march on sandy deserts so I was put in charge of a Field Post Office.

I finished my regular service on October 20th 1920 and was without a job, but got no unemployment pay because I had a father and two younger brothers in work, so I was told they can keep you. And they did, for fourteen months

The next war found me a Platoon Sergeant in "Dad's Army". 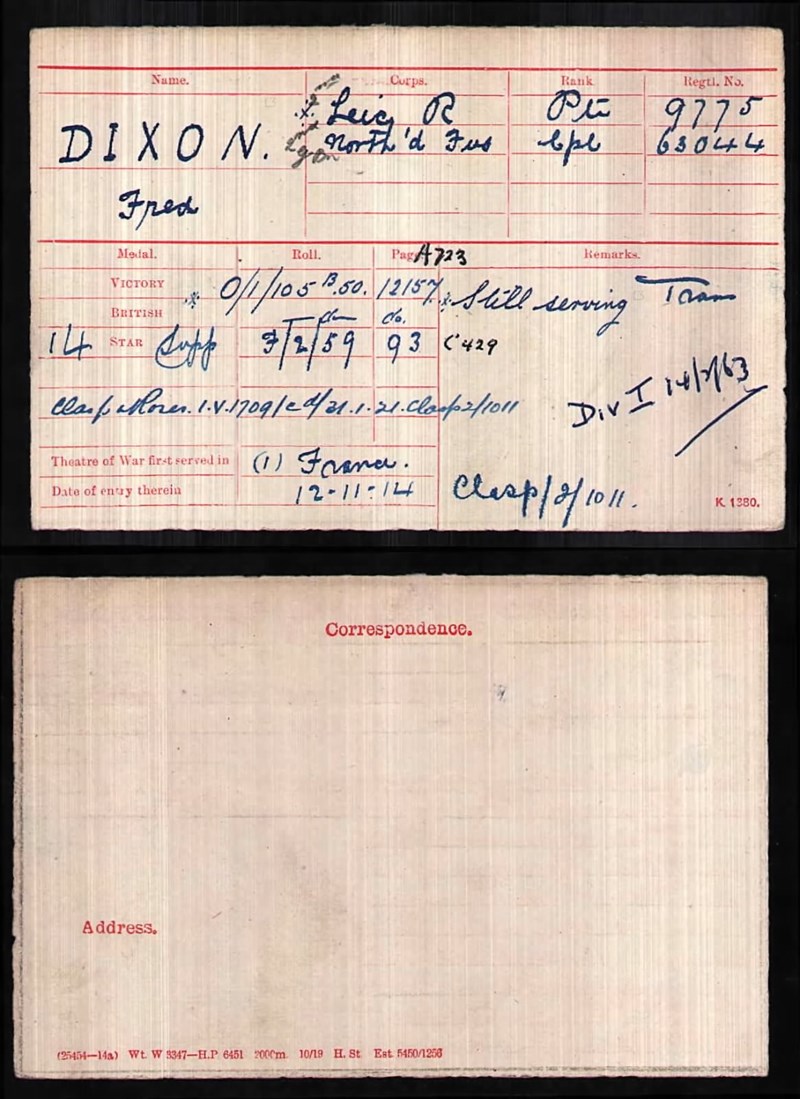 Below: The Battle of Neuve Chapelle by James Prinsep Beadle (1863-1947). Maidstone Museum and Bentlif Art Gallery. 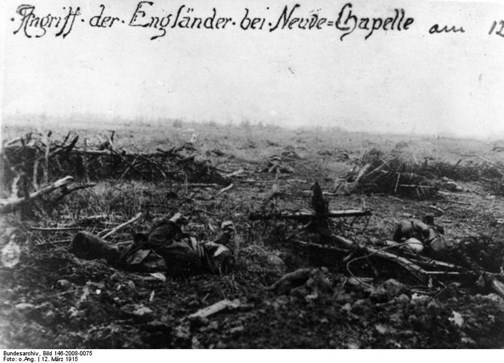