Southampton: The Gateway to War

When Britain entered the First World War in August 1914, there was no question as to which port was going to be the focus of activity – secret planning had been ongoing for years in relation to the city of Southampton.

Previously used as the point of embarkation for troops bound for both India and the Boer War, in 1912 a practice mobilisation had taken place which had seen troops camped on Southampton Common prior to being sailed around the coast and disembarked in Essex.

Southampton could boast deep water docks for the handling of large numbers of ships and was far enough away from the main body of the Channel to lessen the threat from German U-boats. 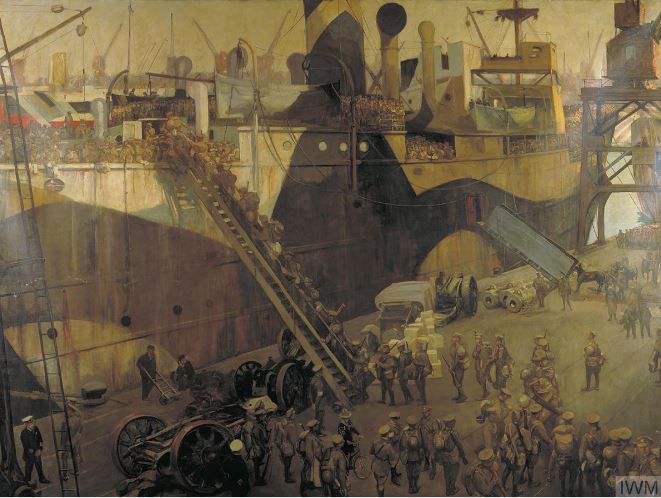 Above: ‘Troops Embarking For the Western Front in 1917’ is an oil painting by the war artist John Lavery of Southampton docks. © IWM Art.IWM ART 2616 Part of the impressive war art collection held by the Imperial War Museum, it is a view from the quayside showing troops boarding an already crowded dazzle-camouflaged ship.

The impact on residents was immediate, as a great barricade of timber and corrugated iron was erected along the main street into the docks. Only those with special passes were permitted beyond the double guard. Meanwhile, a big suite of offices belonging to a German shipping line was requisitioned as the HQ for the embarkation staff and an adjacent hotel as the office of the 'Commandant of Southampton City', Brigadier General Alfred G Balfour.

The railways were taken over by the state, and a steady supply of troop and supply trains began to pour into the docks. The planners had split each working hour into five 12-minute segments and planned to get one train successfully unloaded and moved on in each segment. Things were soon going so well that this target was surpassed, and at the peak of mobilisation up to eight trains were being brought in each hour. This resulted in 90 troop trains per week being dealt with instead of the expected 70. Furthermore, it was claimed that only one train ran late in the whole first period of mobilisation. 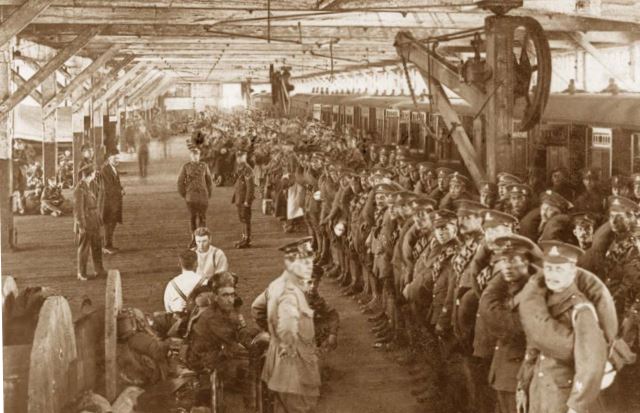 Above: Troops in a dockside shed waiting to board their ship

The trains were not allowed to stop anywhere and went straight to the dockside sheds alongside the berth at which the troopships were waiting. Precautions were taken to preserve the secrecy of this military movement, with Territorial soldiers guarding bridges and tunnels and passengers informed of revised timetables and kept away from platforms until a few minutes before their train was due.

Security was, however, lighter moving through Southampton itself - where locals gathered to cheer the troops at level crossings. There was a press embargo throughout the deployment.

In Southampton water virtually every steam ship company was represented, with ships coming from all the major British ports to help embark the expeditionary force. The local papers reported

"Never within memory have such scenes been witnessed in the Solent as during the past few days. Throughout day and night there have been constant departures of huge steamers laden with troops, guns and horses forming part of the expeditionary force. As the troopships passed Cowes the Royal Yacht Squadron signalled ‘Good Luck’ " 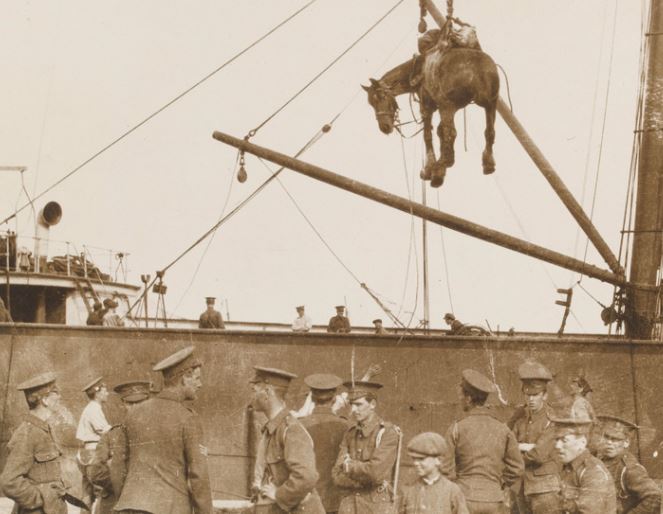 Southampton Common had large rest camps and nearby sites at Salisbury Plain and in Winchester were used as assembly points. Most troops arrived and left in less than 24 hours, as well as thousands of horses and hundreds of motor vehicles.

The local population played a big part in keeping up the moral of the troops, with thousands visiting Southampton Common with gifts. A writing room was set up with free paper, envelopes, and stamps. The WMCA set up and provided free refreshments, tobacco, and cigarettes, whilst the ladies of the Avenue Congregational Church provided tea and watered horses.

The local papers took a great pride in reporting the success of the deployment and proclaimed:

'This was the greatest event in Southampton since the departure of England's troops to Crécy in 1316. When we reflect that it was only on the fourth of this month that war was declared and it is astonishing that by the Eighteenth the nation could be informed that the whole expeditionary force with all their transport wagons, horses, and guns, had been safely landed in France, and that 'without a single casualty.'' 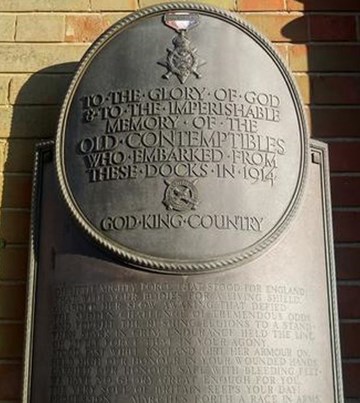 Above: The Old Contemptibles Plaque near Dock 4

Above: Port commander Alfred G Balfour was presented by America with a Distinguished Service Medal for his work at Southampton.

By the end of the war, it is estimated that there had been more than 70 million troop movements made from the port, let alone livestock and supplies, and Brigadier General Alfred G. Balfour would go on to thank the people of the city for the significant part they had played. Balfour would himself receive a Distinguished Service Medal from President Woodrow Wilson for the work he had done to ensure the safe transportation of American troops from the city.

Despite such remarkable achievements, there is just one small bronze plaque that acknowledges Southampton’s role as an embarkation point in the war– the ‘Old Contemptibles Plaque’ on the side of Admiralty House near Dock 4.