The 2nd Northants at Neuve Chapelle

The initial impetus behind this article was research on Lieutenant George Duff Gordon, who hailed from Elgin. During the course of this it became apparent that 2 Northamptonshire Regiment had suffered heavy losses over the period between 10 and 13 March 1915, with the war diary identifying that of 20 officers, 10 were killed, 7 wounded, with one missing. One of the wounded officers died several days later. Of other ranks, the diary records that 102 were killed and 203 wounded, with 109 missing. The vast majority of these casualties are commemorated on the Le Touret Memorial. 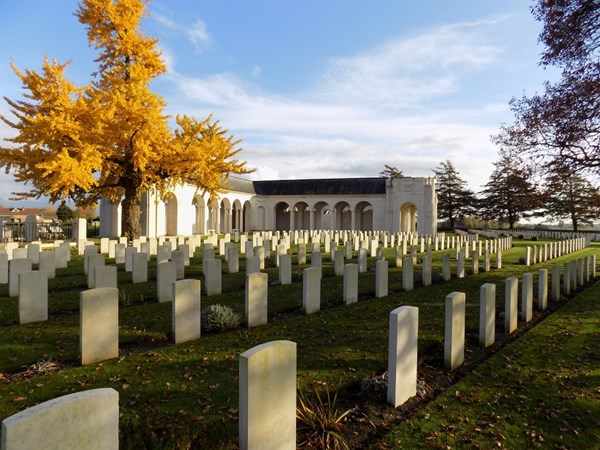 The article on Neuve Chapelle describes the action at this often forgotten offensive and sets out some detail of the losses sustained by regiments taking part in the action.

He was born in 1893 and enlisted on the outbreak of war. A brother officer later told Edward’s family that ‘The bombardment started at 7.30am on 10 March. We had taken the first line of German trenches and were advancing on the second, your son leading his men about twelve o’clock, when he was hit in both shoulders by shrapnel and died immediately. Her was buried where he fell behind the first line of German trenches’. 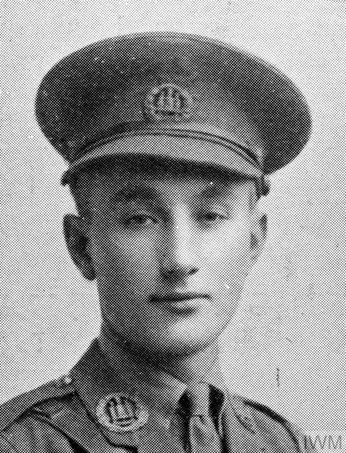 Major Charles Ernest Higginbotham was the senior major in the line battalions of the Regiment. Born in 1866, he was educated at Rugby and at RMC Sandhurst and received his first appointment in the Northamptonshire Regiment in 1897. Charles was killed on 12 March 1915, with his Commanding Officer later writing ‘Had he alone survived I should have been content for the future of the regiment’. Charles’s wife, Lucy Frances, predeceased him by only a few days. He is commemorated on the Le Touret Memorial. 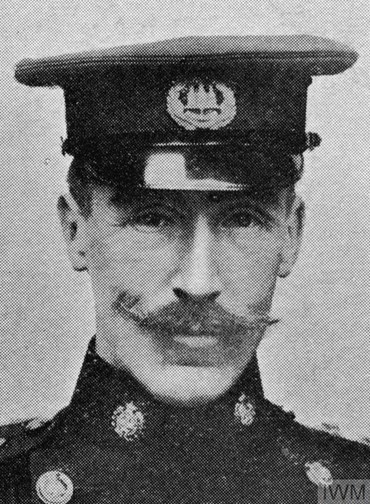 Second Lieutenant Percy Beresford Lees was born in June 1890, the son of Colonel Charles Percy Lees and his wife, Anna. He was engaged in mining in Canada but returned home on the outbreak of war. Gazetted 2nd Lieutenant in November 1914, Percy had been in France for less than a fortnight when he was killed in action. 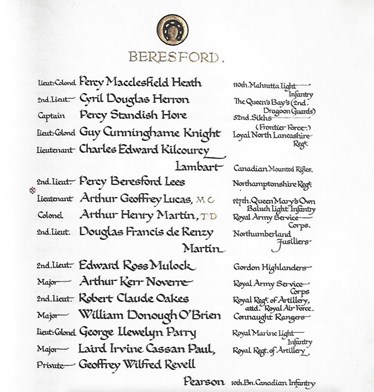 Second Lieutenant Clare Belding was born in South Creake, Norfolk, in 1874 and attested for the Northamptonshire Regiment at Colchester in 1895. Posted to the 2nd Battalion, he was promoted Corporal in 1897, before transferring to the 1st Battalion in 1898, and served with them in India from that date to 1905. By 1907, he was Colour Sergeant  and then appointed Company Sergeant Major in 1913, and awarded his Long Service and Good Conduct Medal.  Belding was commissioned Second Lieutenant in the Northamptonshire Regiment on 4 November 1914 and served with the 2 Battalion from 8 November 1914. 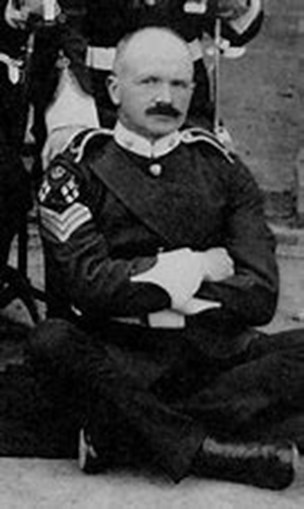 Captain Arthur George Coningsby Capell had joined the Northamptonshire Imperial Yeomanry in January 1900 and served in South Africa. By the outbreak of war, he was serving in 2 Northampton Regiment in Alexandria, going to France in November 1914. On 12 March 1915, he was twice wounded but refused to fall out and went on leading and cheering his men till he was shot through the head. He was later mentioned in Field Marshall Sir John French’s Despatches for gallant and distinguished services. Arthur was buried beside his great friend Captain Herbert Power, although both graves were later lost. 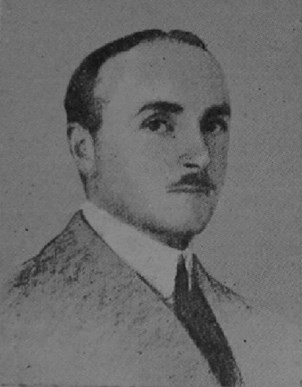 Adjutant Captain Herbert Power, son of Colonel FE Power, The Northamptonshire Regiment, was born in March, 1886.He was killed when the battalion was ordered to retire following the attack on 12 March and later mentioned in Field Marshal Sir John French’s Despatch of 5 April 1915. 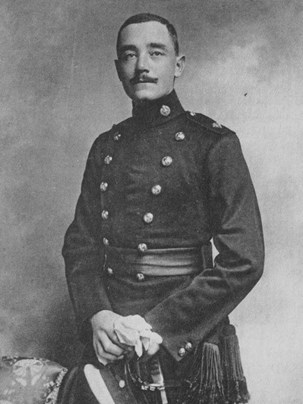 Captain James Isidore Wood-Martin was born in September 1874, the eldest son of Colonel William Gregory Wood-Martin. He served in the Northamptonshire regiment from 1895, serving in South Africa, Egypt and Sudan. His younger brother, Francis Winchester Wood-Martin, serving in the 1st Battalion of the Suffolk Regiment had been killed near Ypres less than a month before James’ death. 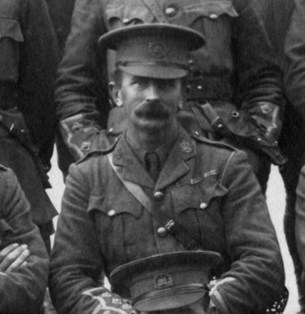 Captain St John Chrichton Stocker was born in June 1888, the son of Colonel Maurice Stocker. He was gazetted to the Northamptonshire Regiment in 1909, serving in Malta and Egypt prior to the outbreak of war. 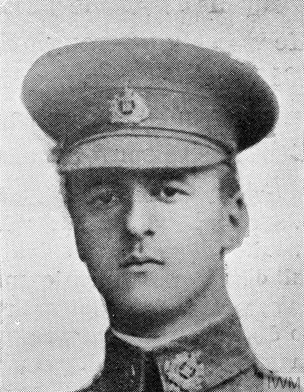 Captain Alexander Moultrie Wallace was born in May 1881. The son of the Reverend W.E. Wallace. He served in the Oxfordshire yeomanry in South Africa in 1901 and 1902 and on the outbreak of the Great War, he joined the King Edward’s Horse before being gazetted 2nd Lieutenant in the Northamptonshire Regiment. An officer later wrote ‘I am afraid poor Wallace has been killed. The Corporal of his Regiment who drew rations from me told me that his Platoon Sergeant saw him badly wounded and implored him to go back, but he said he would not while he could crawl. And shortly afterwards he received another wound which he thinks must have killed him. His Regiment lost terribly. The Corporal said his men called him ‘a champion officer’ and he was always splendidly brave and cheery out here’. 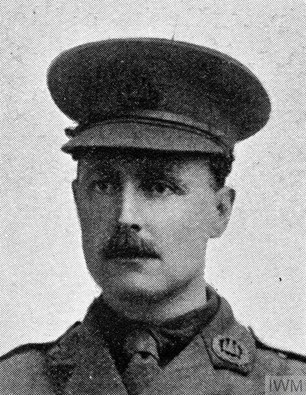 Captain Leslie John Robinson was born in 1887, the only son of the Reverend William Robinson. He was gazetted 2nd Lieutenant in April 1903. By 1910, he had been promoted to Captain. In 1913 he married – his twin children were born less than a week before his death in action. Leslie is buried in Canadian Cemetery No 2 at Neuville-St Vaast. 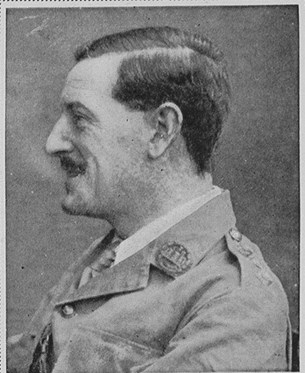 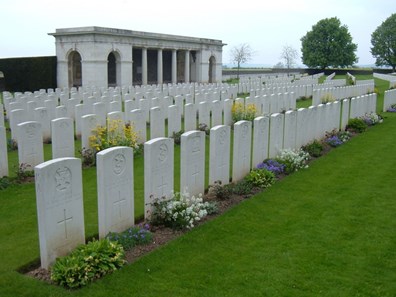 A plaque in his memory can be seen at St Albans Church in Ealing. 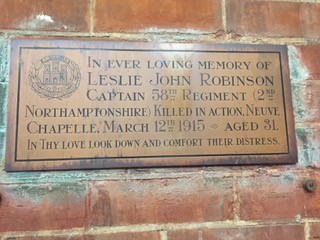 Lieutenant George Duff Gordon was born in July 1894, the son of Robertson and Marjory Gordon. He was educated at Elgin Academy, Ardvreck, Crieff and Dover College and later went to Sandhurst. Gazetted to the Northamptonshire Regiment, he went to France in November 1914. George was shot in the throat when looking over the top of the trench for a line of future advance. He is one of only three of the officers lost in this period to have a known grave and is buried in Estaires Communal Cemetery and Extension. 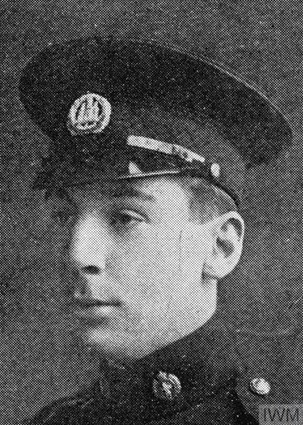 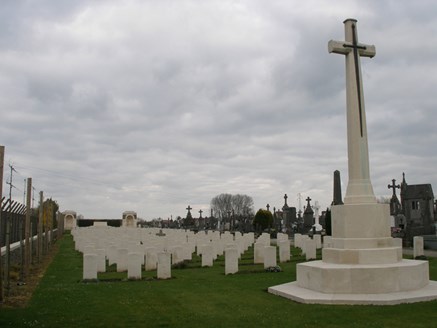 One of the wounded officers later died of wounds.

Lieutenant Reginald Lucy was born in 1893, the son of Major Reginald Horace Lucy. He was gazetted 2nd Lieutenant in 1913, serving in Malta and Egypt prior to the war. He died of wounds at No. 7 Stationary Hospital, Boulogne on 19 March 1915 and it appears that his body was repatriated as he is buried in his home town of Plymouth in Ford Park Cemetery (formerly Plymouth Old Cemetery). 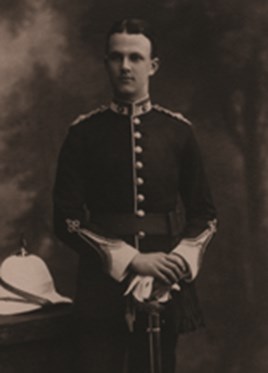 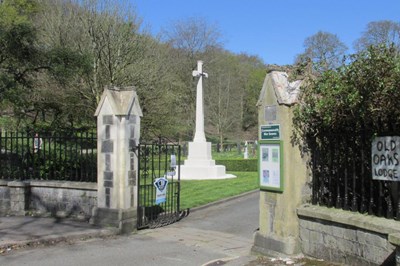