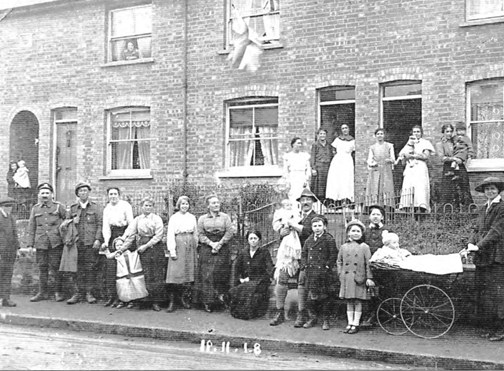 Armistice Day’s rejoicing spread throughout Britain at remarkable speed as the simple messages on the reverse of this postcard underline:

What do you think of this - do you know all of them. Bert calls them Chiltern Terrace Washer Women. The date is on when they were taken. Some excitement. The date is almost certainly a poor figure ‘T’ , rather than a bad '8' or '9', written on the original negative through the back of a special pocket camera.

11 November 1918 may have been Armistice Day, but it was also a Monday - and in homes throughout Britain Monday was wash day - war or no war. Nothing other than very great excitement would have brought out flags - or women beyond their front doors wearing their wrap-around 'pinnies'. Pride dictated 'clean nets' at the windows, and when a woman left the house she left her pinafore in the kitchen, and wore a hat. Unfortunately the postcard is neither addressed nor franked. Are the houses there still? Can any reader locate Chiltem Terrace? 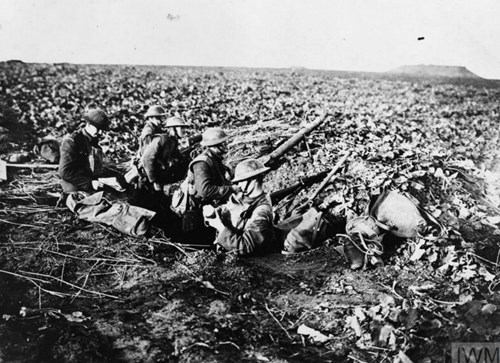 Irish Guardsmen at their posts in a slit trench five minutes before the signing of the Armistice. Near Maubeuge 11 November 1918 (IW M Q 3344)

From the Vicar of St.Chad 's, Winsford , Cheshire, as printed in the Parish Magazine of December 1918 : We are delighted. Victory has come at last, and come more abundantly than we ever expected in so short a time. Truly, the hand of God is plainly seen. November 11th was a red-letter day in Winsford as elsewhere. We had a magnificent congregation at night. The service was beautiful, and the illuminated Soldiers' Grave and Memorial was plain evidence that the fallen were high in our minds. This I write for our men abroad, we at home already know it; news of the signing of the Armistice arrived about eleven o'clock, and not so very long after the Scouts' Bugle Band of some 31 performers was parading the streets. A fine Union Jack led the way. Later, a band of mixed players was also in evidence. After tea the Scouts again drummed up, with a light instead of the flag, to Church. I was asked to speak at the Drill Hall meeting (4.30), at which there was a good attendance. Nearly every house put up a flag. On Tuesday morning there was a large number o f communicants at 7 and 10.30. The Church Bells rang out all Monday afternoon and evening, thanks to our men and also our lady ringers, all o f whom voluntarily gave their services. The Scouts were so enthusiastic they smashed another drum ! Winsford has every reason to be proud of the dignified way in which she celebrated the day.

(From the forthcoming book: A Parish at War by Ann Clayton) 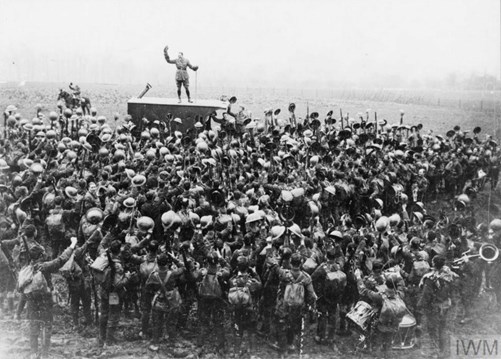 The Commanding Officer of the 9th Battalion, East Surrey Regiment stands on a lorry surrounded by his men and leads a cheer to the King, St Waast, near Bavai, 12 November 1918. (IW M Q 3362)