The Battles of the First World War took place in many countries and across various continents - from China to Lake Tanganyika in Africa; from off the coast of Chile to the files of France and Flanders. While these battles were being fought overseas, in April 1916 a rebellion broke out in one of the principle cities of the British Isles.

Prior to the outbreak of the war, Ireland (which was then part of the United Kingdom) was on the verge of a crisis. The Government in London was looking to come to an agreement with Irish Nationalists on the question of 'home rule'. A bill passed through the parliament but the outbreak of the war meant its implementation was put on hold. Despite the tensions within Ireland, when war was declared with Germany these differences were put to one side and thousands of young Irishmen volunteered to serve in the British Army. 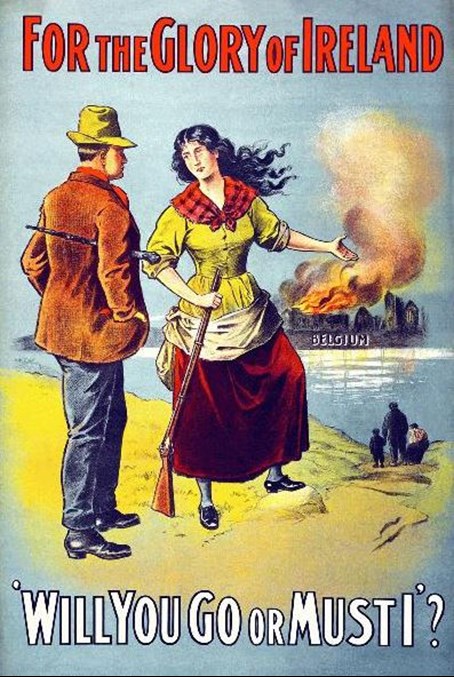 Despite the many thousands of men who volunteered to enlist in the British Army, the Irish people were split over the best way forward, and some pushed for a more radical solution. In an attempt to bring about independence, an armed insurrection was organised to take place during the Easter week of 1916.

Early on Easter Monday morning, 24 April, about 1,200 Irish Volunteers (a military organisation formed in 1913) and Irish Citizen Army members (trade unionists who had been trained in defence of workers' demonstrations) took over strong points in Dublin city centre and proclaimed the Irish Republic independent of the United Kingdom.

The British troops in Dublin were caught unprepared and the response was disjointed. Two contingents of cavalry were sent to investigate what was happening; one troop of the 6th Reserve Cavalry Regiment - dispatched from Marlborough Barracks - proceeded down Sackville Street. As it passed Nelson's Pillar, outside the GPO, the rebels opened fire, killing three cavalrymen (Private Herbert Cordwell, Shoeing Smith Charles O'Gorman and Serjeant H Shepherd) and fatally wounding a man (L/Cpl Austin Walton). As a result of this patrol, the cavalrymen withdrew and returned to their barracks. 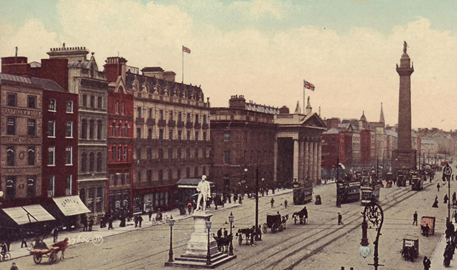 Above: The GPO and Nelson's Pillar (c.1908) on Sackville Street (now O'Connell Street). 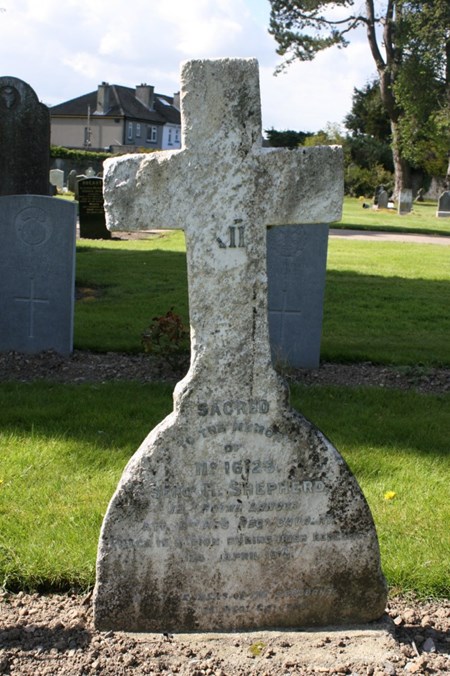 Above: The headstone of Sjt Shepherd at Grangegorman Military Cemetery.

The seat of British power was at Dublin Castle. On the outbreak of the rebellion, the castle was virtually undefended with only about 25 soldiers on duty: many troops had been allowed out to watch the Irish Grand National which was taking place that day.

Despite not being a target (probably because it was believed it was too well defended), shortly before midday a small group of members of the Irish Citizen Army rushed the gates of the castle.

An unarmed constable of Dublin Metropolitan Police, James O'Brien was shot dead in the melee. The raiders seized the guardroom and disarmed the soldiers, tying them up with their own puttees. 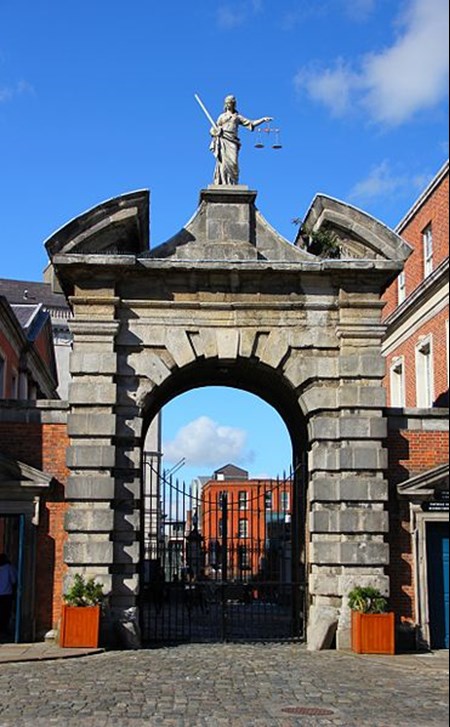 Above: The gates at Dublin Castle.

Racked by indecision at their unplanned success, the attackers did not press home their advantage. Had they done so, they would have been able to capture the Under-Secretary of State for Ireland, Sir Matthew Nathan. 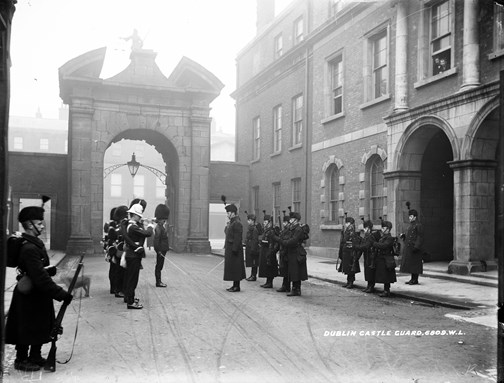 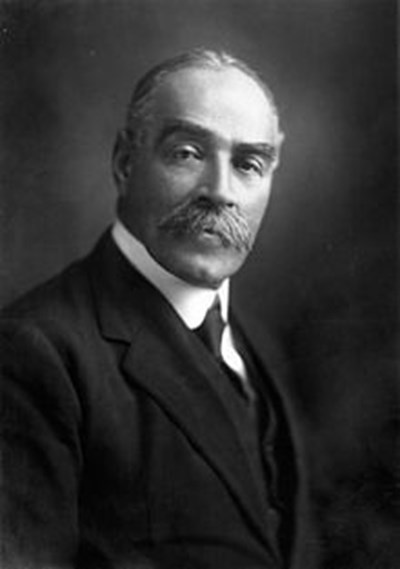 Aware of the importance of the castle, reinforcements were rushed there, including one young officer, 2/Lt Guy Pinfield. 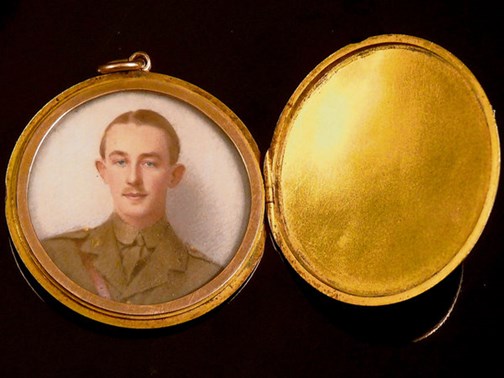 Above: A locket with the portrait of Guy Pinfield. Image courtesy of Clare College, Cambridge

A keen Rugby player (he turned out for Rosslyn Park club at Roehampton, southwest London), in August 1914 Pinfield was studying at Clare College, Cambridge. 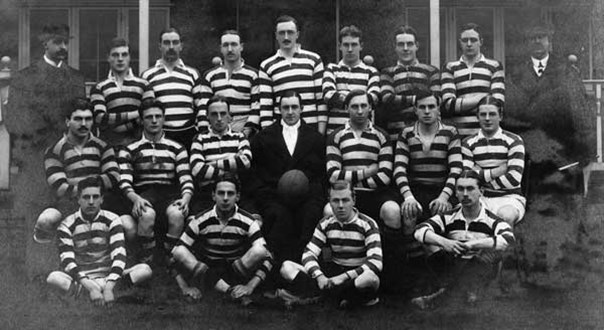 Interrupting his studies when war was declared, Guy obtained a commission, joining the King's Royal Irish Hussars. In 1915, he was posted to the Curragh Camp in Co. Kildare for training.

It was during a skirmish outside the castle that Guy Pinfield was shot. It is possible that he was among a group that was attempting to find a back route into the castle when they were caught in a cul-de-sac. He was the first officer to be killed.  Pinfield's body was hastily buried in a temporary grave in the castle gardens; many others who were to be killed in the following days would be buried alongside him. The following month, May 1916, the families of the British soldiers were invited to reclaim the bodies of the fallen. Any that were not claimed in this way were reburied at Grangegorman Military Cemetery.

For some reason, five officers - Pinfield among them - were neither claimed nor re-buried, their bodies remained at the castle until 1963 when they were reinterred at Grangegorman (which is close to Phoenix Park).

Four of the officers originally buried at Dublin Castle Purser, Pinfield, Lucas and Hunter are now buried together. The fifth, Worsley-Worswick, is buried in the RC (Officers) section.

Casualties during the Rising

British reported casualties of 116 dead, 368 wounded and nine missing. Sixteen policemen died, and 29 were wounded. All 16 police fatalities and 22 of the British soldiers killed were Irishmen. 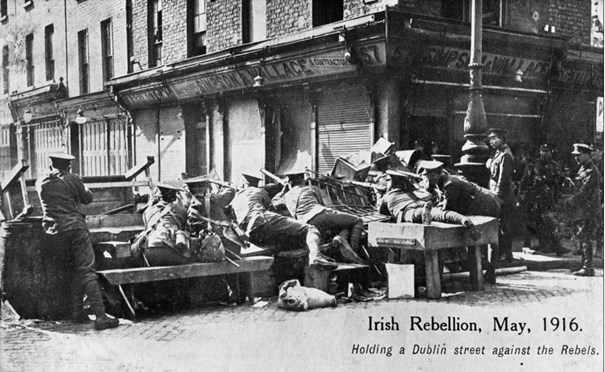 Above: Troops holding a Dublin street against the rebels during the Easter Rising in April 1916. Image courtesy of the Imperial War Museum. Q 82356

One remarkable incident to emerge was that some British soldiers were shot by their own side. In one incident, a Royal Naval Engine room artificer called Robert Glaister was shot dead when he refused to obey a jumpy sentry - the sentry also shot and wounded a civilian. The sentry was later sent for trial, found guilty of manslaughter and sentenced to five years penal servitude.

On the fifth day of the rising, 28 April, four deaths occurred in the Guinness brewery, with Company Quartermaster Serjeant Robert Flood of the Royal Dublin Fusiliers subsequently standing trial for murder.

The Irish Times reported the events in the trial of Serjeant Flood.

William John Rice, a night clerk in the Guinness brewery along with a Lieut Lucas of the 2nd King Edward’s Horse Regiment, was shot dead at his place of work, by members of the Royal Dublin Fusiliers on Friday, April 28th. It appears the two men, Lucas and Rice, were making their nightly round of the brewery buildings when they were challenged by very nervous and jumpy Royal Dubliners. 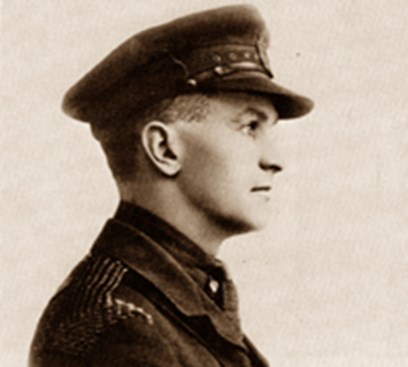 The report goes on

The guard in the malthouse belonged to the Royal Dublin Fusiliers. Of course Lieut Lucas was unknown to the Company, Quartermaster-Sergeant [Flood] or any of the guard. At any rate, whatever it was, the guard got into a state of jumpiness, and the consequence was that when Lieutenant Lucas went round with Mr Rice, one of the brewery officials, the sentries on several occasions got the idea that he was a stranger who had no business there. The conversations he had with them were misinterpreted, and they came to a conclusion which was utterly false..... Lieutenant Lucas opened a window. The men knew that orders had been given that the windows were not to be opened. It looked very suspicious. The state of mind into which accused had got at that tune led him to arrest Lieutenant Lucas and Mr Rice, who were subsequently shot.

Twenty minutes later, another incident occurred in the brewery.  The guard had gone to the floor below and heard footsteps. A challenge was shouted, but there was no reply. Sjt Flood switched on his torch and found two men, one a civilian, the other in an officers uniform. Both men were unarmed, and agreed to be searched. It seems that although Flood gave no orders, the men with him opened fire. The newspaper report continues:

Another officer and a civilian brewery employee, Lieut Worswick and Mr Dockeray also a Guinness worker were shot dead around the same time. These deaths caused considerable concern as the victims were known not to have any sympathy with the rebel cause. Sergeant Robert Flood was subsequently court-martialled for the first two deaths. In evidence for the defence it was argued that Lucas and Rice had shown signs of Sinn Fein sympathies. The judge was quick to point out that no such evidence had been produced in the case of Lucas. The Managing Director of Guinness issued a statement saying, on behalf of the company, that neither Rice nor Dockeray was in any way connected with the Sinn Fein rebellion.

The second officer to be killed was 2/Lt Basil Worsley-Worswick. He had served in France as a trooper in King Edwards Horse in 1914 before being sent home to take up a commission in September 1915.

Both Lucas and Worsley-Worswick were buried in Dublin Castle grounds and subsequently re-interred at Grangegorman in 1963.

Sjt Flood was acquitted of the charges (presumably there was insufficient evidence to charge him with the murder of Worsley-Worswick and Mr Dockeray). It seems that after his acquittal he transferred from the Royal Dublin Fusiliers to the Royal Berkshire Regiment and, joining the 7th Battalion, was posted to Salonika, where he was killed during the First Battle of Doiran the following year.

Flood is commemorated on the Doiran Memorial in northern Greece. 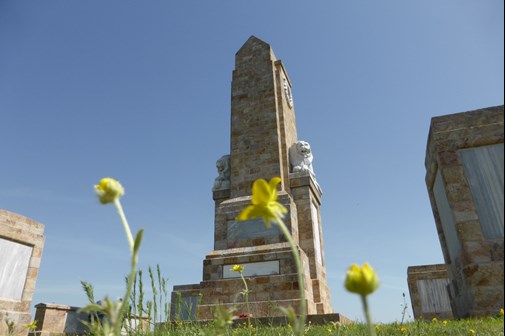 Above: The Doiran Memorial

The consequences and legacy of the Easter Rising were profound. Independence, civil war and partition followed. It is only in recent years that this is being overcome with closer ties between the UK and Ireland.

The Battle of Mount Street Bridge