The Influenza Epidemic of 1918

History records several great pandemics (i.e. country-, continental- or world-wide outbreaks of disease). Prominent among these were the Black Death, 1347-1351, the Great Plague in the 1660s, cholera in the late nineteenth and early twentieth centuries and the 1918 influenza pandemic (Spanish 'Flu).

As the 1918 influenza pandemic only broke out on the Western Front as the Great War was drawing to its climax, it had no great effect on the strategic and tactical prosecution of the war by the Allies. And, in any event, it affected the Central Powers as badly as it did the Allies. But on a personal scale it was a disaster of enormous proportions, dwarfing all the other casualty lists of the war.

To give this pandemic some perspective: if the graves of the 750,000 Western Front Commonwealth dead and missing were concentrated into a single location, they would occupy an area of about 3 square kilometres or 1.2 square miles. If all the dead of the 1918-1919 flu pandemic - 40,000,000 - were similarly concentrated, their graves would cover an area of around 160 square kilometres or 62 square miles.

For many years epidemiologists have thought that the 1918 flu epidemic started in San Sebastian, Spain - hence the sobriquet 'Spanish 'Flu'. It was here, in the early months of that year, that the definitive signs and symptoms of this strain of the disease were reputedly first recorded. Uniquely, it produced a deep cyanosis (blue skin) and a bluish froth around the nose and the mouth - the so-called heliotrope cyanosis - culminating with the horrific drowning of the victim in his (her) own body fluids. There was also an extraordinarily high mortality rate of twenty times the norm for influenza. Death often occurred within a few hours. In many of the cases that did survive the critical first few days of the influenza attack, death was precipitated by a rampant secondary infection by pneumonia bacteria.

Another unusual characteristic was that most of the 1918 influenza victims were from healthy 20 to 50 year-old age groups (ie the age of military service), as opposed to the normally more susceptible age groups - the very young, or the very old.

Epidemiologists and virologists have made strenuous efforts over the years to determine how this relatively common and seasonal disease mutated into the fatally virulent 1918 strain. But every attempt so far to isolate all of the viral DNA to determine the genetic characteristics that engendered this unusual virulence, has resulted in only limited success in completing the viral genome. In 1951 and 1998, respectively, it was hoped that the bodies of Spanish 'Flu victims buried in Alaska (Brevig Mission) and Norway (Spitzbergen) would yield tissue bearing useful samples of the virus. Unfortunately, it was discovered that in both localities the bodies were buried in shallow graves, so were not preserved sufficiently well by the permafrost to give perfect samples of the complete viral-DNA.

In the United States, test procedures for the influenza virus are currently being carried out by the US Army Medical Services on preserved autopsy sections taken from American servicemen who died in the 1918 'flu pandemic. In the UK, it is hoped that 1918 Spanish 'Flu victims buried in alcohol-filled lead coffins - which usually preserve the cadaver well - will be more productive. Plans for the exhumation of the first body - a young woman who died aged twenty, from a brick-lined vault in London, are well advanced. Only the necessary ethical clearance and approval are awaited at the time of writing. It is hoped that a whole infected lung can be recovered.

It has long been known that epidemic influenza mutates in domestic animals and then passes through direct contact to the human population. The huge pig and poultry populations of China and South East Asia are considered to be primary sources - hence Asian 'Flu. 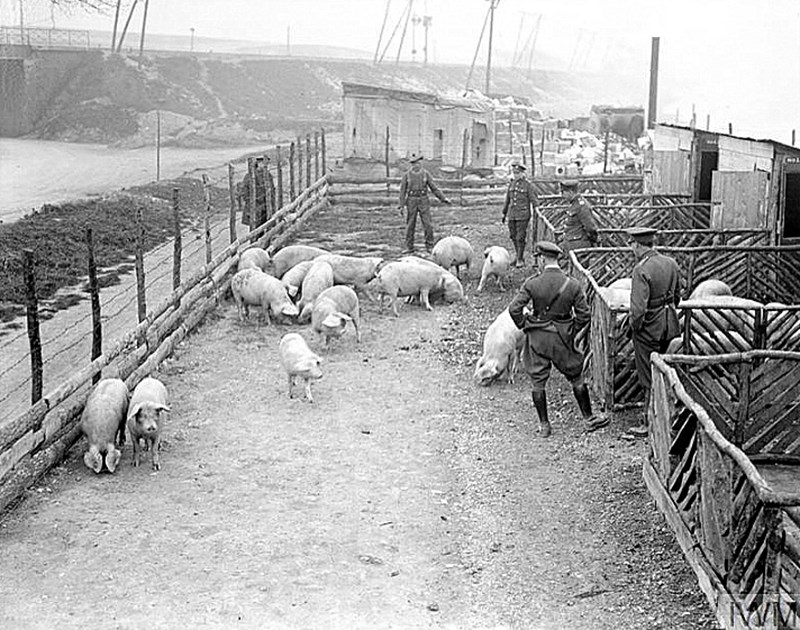 British Army piggery near the fat-extracting plant at Etaples with the swill from which the pigs were fed, 26 April 1918. The pigs were used to supplement the rations. The farm was constructed by the Directorate of Works (Royal Engineers) in 1917 and early in 1918 the Quartermaster General ordered pig farms to be built in all British Army camps. © IWM (Q 8748)

In 2002, epidemiological studies, and a review of the contemporaneous medical journals, indicated that influenza demonstrating the signs of heliotrope cyanosis and high mortality rates was already present in 1916 in the huge British Army transit and training camps in France - notably at Etaples (home to the infamous 'Bullring'). It is also perhaps significant that the Etaples camps maintained pig and other livestock farms to feed the troops. Therefore, it is quite feasible that the 1918 influenza pandemic did not have its genesis in Spain, but rather in the British Army pig farms on the Western Front. Evidently, the huge scale of troop movements before and after the Armistice would have provided an excellent means of propagating the virus to the 57 former combatant countries, from Aden to the West Indies, and thus globally.

It is also of interest to note that many Great War soldiers believed that the pandemic was due to the typhoid vaccination that was compulsory for all Allied troops on the Western Front (shades of 'Gulf War Syndrome'). Large numbers of the civilian populations of the former warring nations were also vaccinated for typhoid after the Armistice to provide protection from 'disease-ridden soldiers returning from the battlefield'. There is, as yet, no scientific evidence to support any connection with these vaccinations and the 1918 flu pandemic.

All in all, yet another extraordinary casualty list generated by the war on the Western Front.