Perhaps one of the most unusual items to be found within the Ministry of Pension card index are the surviving slips for a 'Proposed Grant by the Military Service (Civil Liabilities) Department’. It appears that these slips originally formed part of a separate index and were later amalgamated into the main Ministry of Pension index.

In early March 1916, it became clear that many men called up via conscription had been left in severe financial difficulties at home. A scheme was quickly drawn up and by 25 May 1916, the regulations were in place. These regulations, for dealing with Civil Liabilities, could provide financial assistance to soldiers towards things such as rent and taxes. This was capped at £104 per year. By May 1918 425,999 claims had been made.

Originally formed as the Civil Liabilities Committee the work of the Military Service (Civil Liabilities) Department was transferred from the control of the Local Government Board to the Ministry of Labour in February 1919.

In 1919 a large number of financial assistance cases which had been dealt with by the King's Fund were transferred over to the department. It was found that great delay and confusion was caused by the department managing overlapping schemes and there was an acknowledged confusion over which scheme covered which particular situation. The Kings Fund itself later ceased on 31 July 1920 when their remaining 29,600 cases were handed over to the Military Service (Civil Liabilities) Department to be dealt with. By the time it closed the King’s Fund had dealt with around 96,000 clams.

By 1920 the department had three main sections: group one to deal with able-bodied ex-servicemen, group two to deal with disabled men and group three to deal with any historical claims dating back to the original 1916 scheme. Claims under group one were dealt with locally by the Local War Pensions Committees whereas group two men were processed by the Headquarters branch. Claims totalling around £3.9 million were being dealt with annually

Access to the Civil Liabilities Re-Settlement scheme was closed on 30 September 1921 except for some men who were still under medical treatment and awaiting discharge. The work was rapidly tailing of off and by 1921/22 the staff of the department had reduced to 32 and over the next few years, it ceased to exist as a dedicated department. The amount of work tailed off and by 1931 only 5 grants were given in that year. In 1934 not a single grant was made from 27 applications.

It is not clear how the record slips of the granted came to be attached to the cards of the men held by the Ministry of Pensions as the grant paperwork was dealt with by the Ministry of Labour. At some point, it appears that a decision was made that the index held by the Ministry of Pensions was the best place to store the details and thus they were merged with their records. It would appear that this may have taken place across 1931-1933 and have been done in alphabetical order based on the date stamps shown on the paper slips (A in 1931 to Z in 1933).

If this merger into the Ministry of Pension records had not happened, they would likely have simply been disposed of.

An example of a surviving slip from the scheme can be seen in the records of #35119 Peter Anderson, East Yorkshire Regiment. Anderson was discharged from the army in February 1918 and issued a War Pension with effect from 14 February 1918.

Although he was still not fully recovered, he decided to set up in business and in March 1921 he applied for an initial £35 grant and then a further supplementary grant of £15 in June 1921. 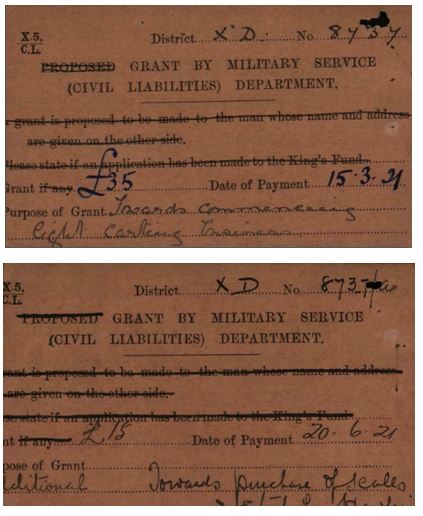 The supplementary grant was expected to be claimed within 6 months of the original grant. The average grant issued to man was between £50 and £60, under half of the maximum amount of £104.

It is not known what became of his business venture but in both the 1911 census and 1939 register the likeliest man appears to be working as a coal miner.