My collaborator in compiling a Roll of Honour for Burslem, Mick Rowson, was recently attempting to maintain his sanity in these strange times by doing some ‘tidying up’ of our database.  His eye fell upon the name of Thomas Adams.  Our basic resource in compiling the roll of honour was Soldiers Died in the Great War [SDGW]. 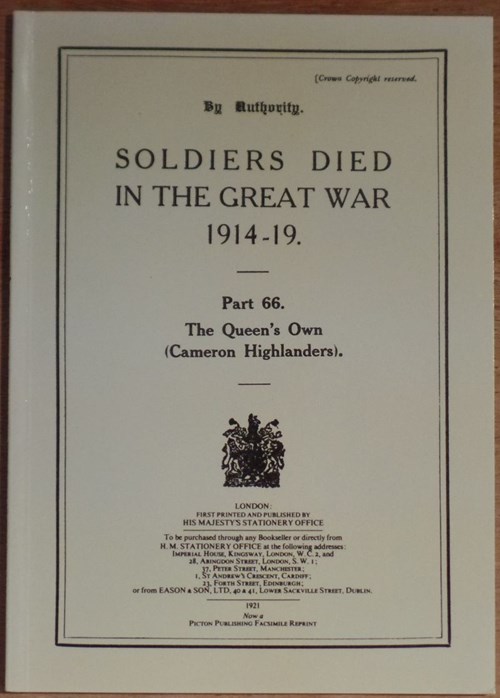 Above: The Cover of Part 66 of SDGW: The Queen's Own (Cameron Highlanders)

Below: Entries on a page of SDGW (this being for men of the Duke of Cornwall's Light Infantry) 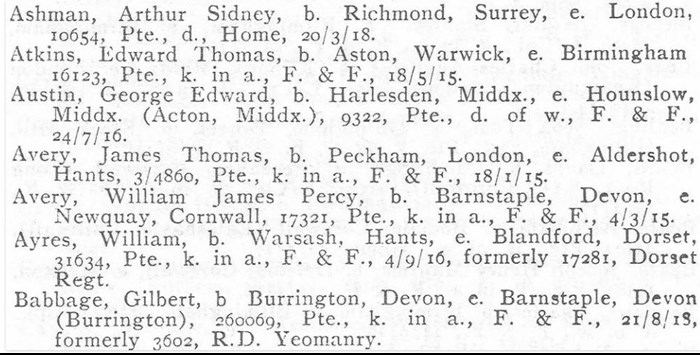 It is from this source we extracted the names of all men who were born in Burslem or who resided there at the time of their enlistment. Soldiers Died in the Great War (SDGW) informed us that Adams was born in Burslem, enlisted in Lichfield and died at home on 21 March 1916 while serving with 14th Battalion West Yorkshire Regiment. This information was confirmed by the Commonwealth War Graves [CWGC] Debt of Honour Register, The Register of Soldiers’ effects, which gave his place of death as ‘Rugeley Military Hospital’, and his CWGC headstone in Burslem Cemetery.

Above: The CWGC entry for Adams

Below: Stoke-on-Trent (Burslem) Cemetery, where Adams is buried. (Image: CWGC) 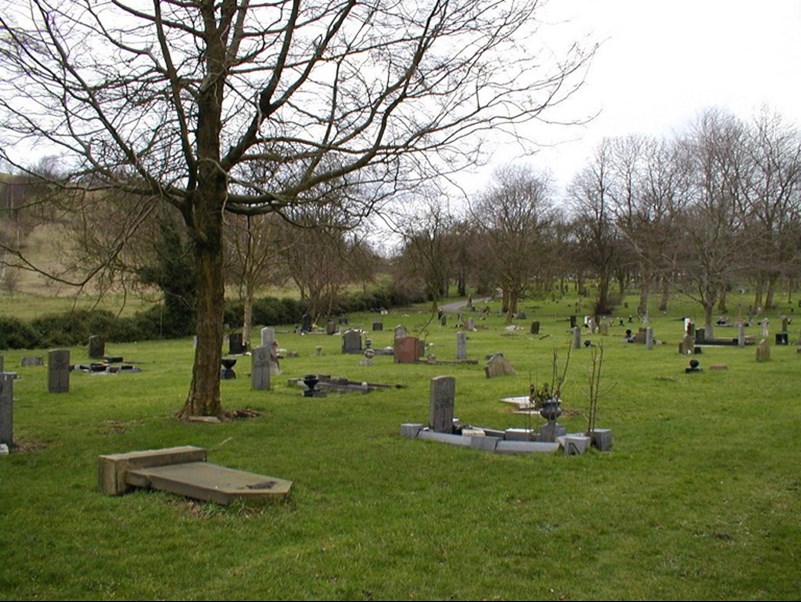 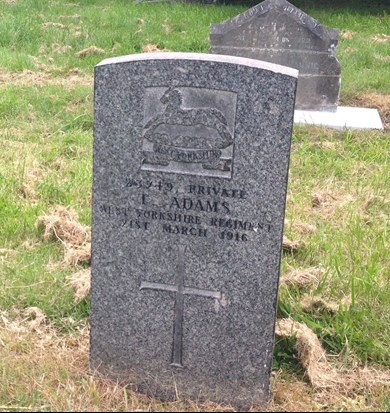 As he never served abroad, there was no Medal Index Card. Research on the 1901 and 1911 Censuses confirmed that Adams was born in Burslem, c. 1882/3, was employed as a plasterer (1901 Census) and a colliery labourer (1911 Census). He was married with three children and lived variously at 6 North Road, then 4 North Road, in the Burslem suburb of Cobridge. So far, so clear, so uninteresting. Until the plot thickened. 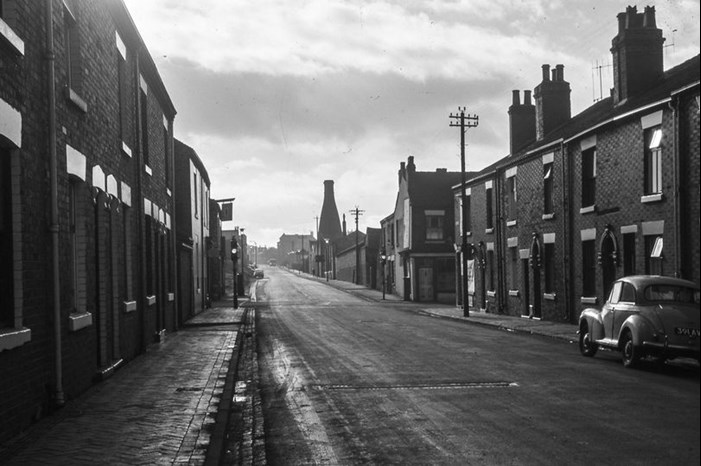 While searching for a possible pension record for Private Adams, Mick noticed the file of ‘Thomas Adams; abt. 1882; 2 North Road Cobridge; 97176 Pioneer Royal Engineers’. The information provided in Sapper Adams’s Attestation Papers with regard to age, address and family was identical to the age, address and family of Private Adams of the West Yorkshire Regiment.  A mystery was born.

Above: The attestation papers of Adams into the Royal Engineers

According to his Royal Engineers [RE] Attestation Papers, Adams enlisted in Burslem on 26 April 1915, stating his trade as ‘plasterer’. He also stated that he had three years’ service in the 3rd Battalion North Staffordshire Regiment. His entry into the RE was ‘approved’ at Chatham on 14 May 1915.  His service with them was short and inglorious. He was discharged as ‘being unlikely to make an efficient soldier’ after 201 days on 18 November 1915. He was in hospital for part of this time, from 2 June to 15 July 1915, suffering from ‘chronic bronchitis and asthma’. Although he was discharged as ‘fit for duty’, his medical report added that he had suffered for ‘ten years’ from ‘a constant cough’ and ‘dysphonia’ [a hoarse voice]. His skill as a plasterer was also noted as being ‘indifferent’. Within five months of his discharge from the army, Adams died while back in uniform but serving in another regiment.

We applied Occam’s Razor to the history of Thomas Adams. The simplest explanation of the known facts suggested that Adams re-enlisted after his discharge from the RE, even though there is no paperwork to confirm this. It is perhaps significant that he chose to re-enlist at Lichfield, where he was not known, rather than at Burslem where he had originally enlisted and from where he came. The 14th Battalion West Yorkshire Regiment was a Reserve battalion based at Brocton Camp on Cannock Chase. 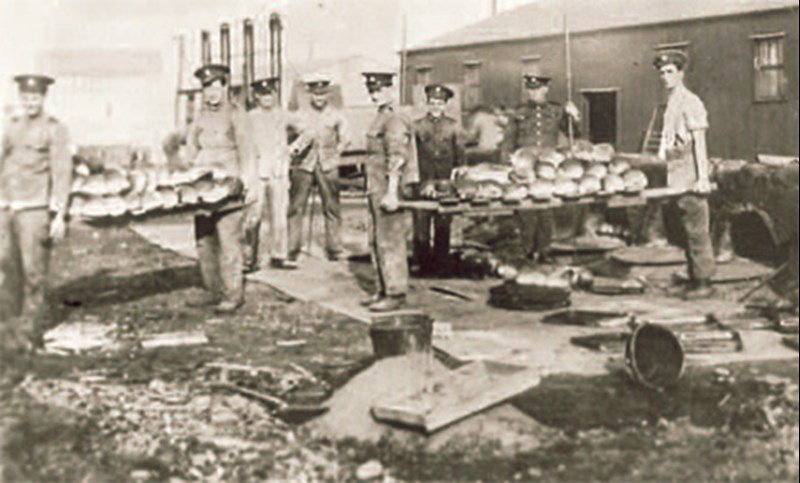 Above: Men of the Army Service Corps stand outside the Field Bakery at Brocton Camp. They are holding pallets laden with bread loaves for baking in the brick and clay ovens. Image courtesy of the Museum of Cannock Chase.

This fits with his death in the Rugeley Military Hospital, nearby. 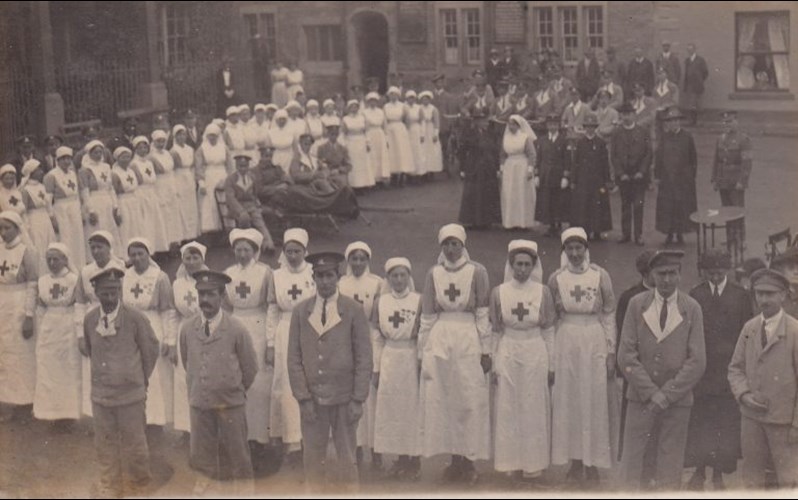 Above: The Ravenhill Auxiliary Military Hospital Brereton, Rugeley: The house was gifted for use as a military hospital by Darea Curzon, 16th Baroness Zouche, and the wife of the Hon. Robert Curzon, Baron Zouche, who had owned nearby Hagley Hall. (Image www.citylifeinlichfield.co.uk]

His successful re-enlistment does not show the competence or honesty of his medical examination in a good light. 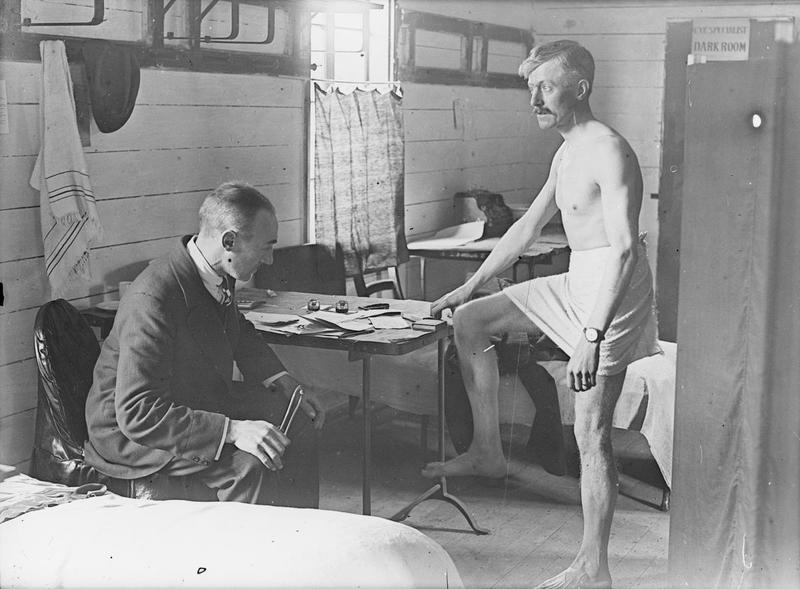 Why did he re-enlist?  In the words of Andy Johnson, ‘The Sage of Tipton,‘ was [Adams] convinced that he could serve his country best by enlisting again …, or did he know that his time was short and if he died in army service then his widow would get a pension? The answer is obviously all of the above / none of the above/ one of the above. Your guess is as good as/better than mine’.

It is no insult to Thomas Adams’s memory to suggest that he probably successfully ‘gamed’ the system. Mrs Adams did get a pension of 23 shillings a week, awarded on 14 September 1916, to run from 25 September 1916. 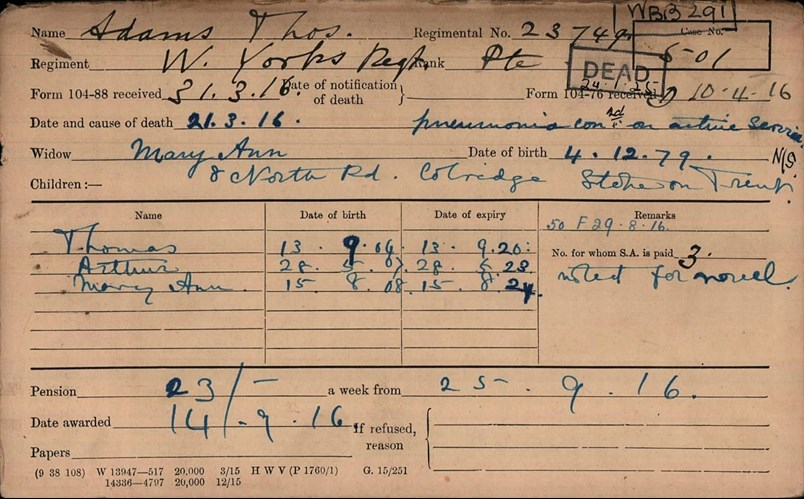 Above: The Pension Record Card (WFA)

Interestingly, the Pension Card states Adams’s cause of death as ‘pneumonia con[tract]ed on active service’.  This may have been true, but given his previous medical history, of which the medical authorities in Rugeley appeared to be ignorant, it is a little disingenuous.

The story of Private Adams provoked a thought about local war memorials. Adams’s four addresses recorded in various sources were 2, 4, 6 and 8 North Road, Cobridge. There were two local war memorials raised very close to these addresses, the Hot Lane & Elder Road Street Shrine (as it is officially, though possibly incorrectly, known) and the North Road Memorial. 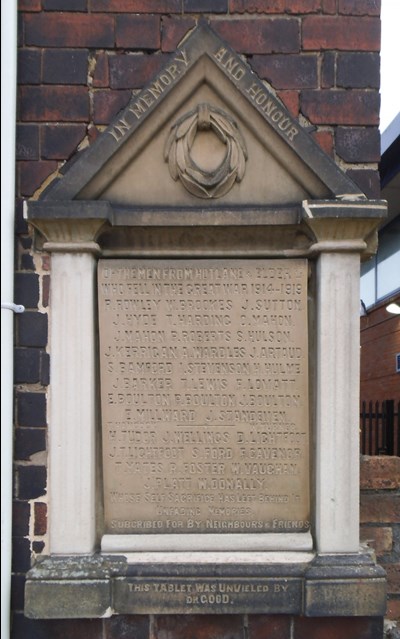 The first memorial was on the wall of a pub at the bottom of Hot Lane, diagonally opposite Nos. 2, 4, 6 and 8 North Road.  The North Road Memorial migrated from the walls of various pubs until it recently found sanctuary in Christ Church, Cobridge. 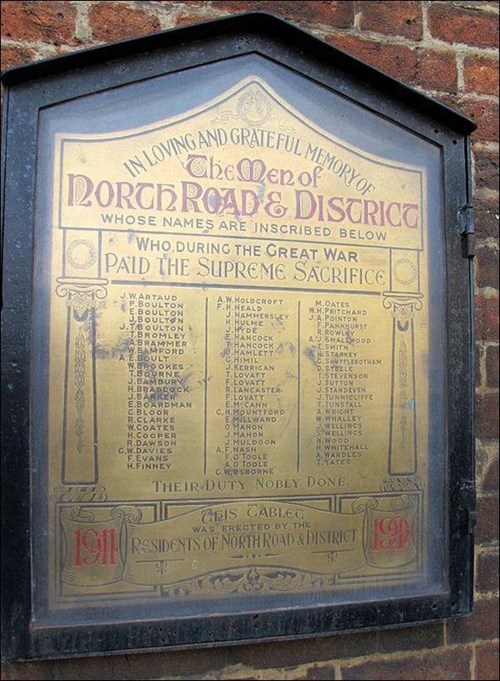 Above: The North Road Memorial in Christ Church, Cobridge (IWM)

Adams’s name is absent from both these memorials and also from the Christ Church Memorial. His absence from the Hot Lane memorial is understandable. It was dedicated to men who had lived in Hot Lane and Elder Road. The Christ Church Memorial was dedicated to men of the parish of Cobridge. Nos. 2, 4, 6 and 8 North Road appear to have been in the parish of Sneyd (Adams and his wife were married at Holy Trinity, Sneyd, in 1904).  But he was clearly a fully paid-up North Roader.  Why is his name not on the North Road Memorial?  It is often difficult, if not impossible, to put oneself in the position of the people who commissioned and erected local war memorials. Was Adams left off the memorial because he died at home and not as a result of enemy action? 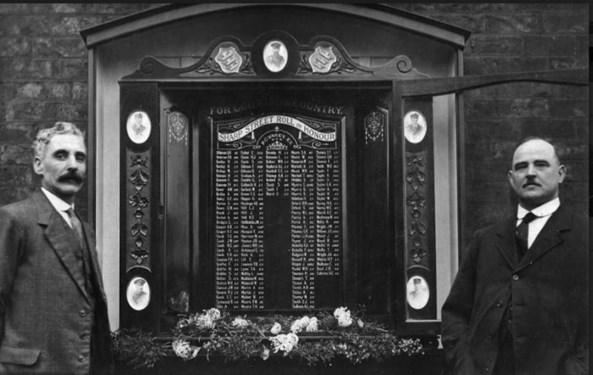 Above: Sharp Street WW1 Memorial, Newland Avenue, Hull. It seems Kingston-upon-Hull had a substantial number of 'street shrines' most of which have disappeared. The survival of the The Hot Lane & Elder Road Street Shrine in Burslem makes it quite unusual.

This speculation made me think again about the absence of my grandfather, Jesse Sheldon, from the closest local memorial to his home at 46 Navigation Road, Burslem, the Barnfields Memorial, which stood originally in Pleasant Street. Although Navigation Road ran across the top of Pleasant Street, and provided the northern boundary of Barnfields, I should not have placed it in Barnfields myself. I was therefore not surprised that my grandfather's name was absent until I realised that the name of his next-door neighbour in Navigation Road, Albert Hancock, was on the memorial. My grandfather died on 29 October 1918, ten days after he was discharged from the army, but from illness acquired on active service. Perhaps he therefore did not ‘count’ in the eyes of the people who erected the Barnfields Memorial. Interestingly, my grandfather is on the local war memorial in St Anne’s Church in his home village of Brown Edge, but at the bottom and separately from the names of those ‘Killed in Action’, as one of four men whose deaths were ‘Due to War Service'. 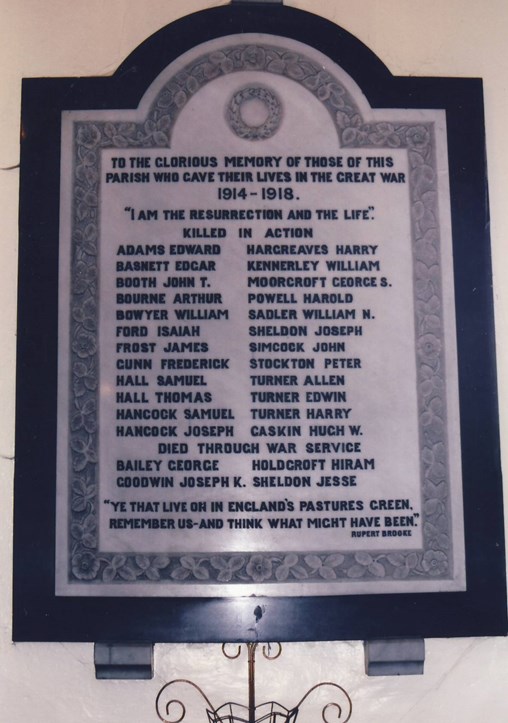 Above: The memorial in St Anne’s Church Brown Edge

These apparent omissions and contradictions are to be expected. According to Dr Angela Gaffney, ‘the question of whose name is excluded/included on war memorials highlights the ad-hoc approach to remembrance in the United Kingdom in the years after the war, unlike in France where the organization was carried out centrally. [British] communities took it upon themselves to remember their own sons, in their own time, in their own way whether organised by parish/urban/rural/town councils or by independent committees’. It was inevitable that mistakes would be made and injustices perpetrated.  Let this short article therefore act as a belated memorial to a forgotten British soldier of the Great War.

[We wish to acknowledge the help of Dr Alison Hine and Andy Johnson in interpreting the military career of Thomas Adams and Dr Angela Gaffney for her advice on local war memorials.]