The Thing Called 'Armistice' by A S Taylor

Stand To! 72 had just arrived, and as I sat in my office I eagerly ripped open the package to scan it, before putting it away to read in detail when I got home. At that moment a work colleague came in just as the journal was open at the article on the 15 (Service) Battalion Durham Light Infantry. He said 'My grandfather served in the Durhams in the Great War' - instantly interested, work took second place! The next day he brought in some memorabilia relating to his grandfather - medals, photographs, documents and some magazines. I quickly looked at the photographs which showed officer cadets - identified by the obvious white band and some photographs which appear to have 'The Mutiny March' and 'Mutiny. Catterick (Richmond) Nov 12' written on them. This intrigued me, but I had to wait until that evening to carry out a full examination - when all became clear!

The memorabilia belonged to 276886 Private James Speight of D Company 20 Battalion Durham Light Infantry, the medals being the British War Medal and the Victory Medal. It would appear that he was a pre-war photographer with his own business in Sutton Coldfield - clearly he was a man of 'means'. He joined the battalion in July 1917 in the Ypres area. The Commanding Officer was Lt Col P. W. North. Pte Speight spent time in the trenches and was promoted Corporal and moved with the battalion to Italy. His 'means' allowed a degree of comfort and each week he had his local baker sent, wrapped in brown paper and string, two loaves of Hovis; he mused as to how the ordinary soldier survived without 'extras'. 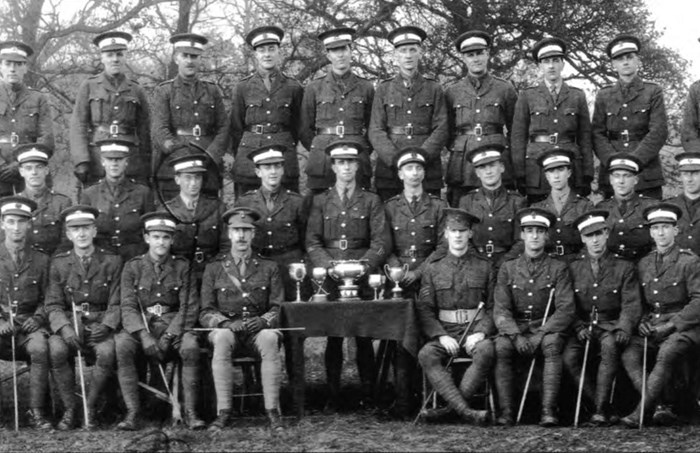 In summer 1918 he was selected to undergo officer training at Catterick and joined D Company 14th Officer Cadet Battalion; he was destined for a commission in the Royal Warwickshire Regiment. He was under training at the time of the Armistice. On reading the Cadet Battalion magazine, Ultimus, my 'mutiny' question was answered. Officer Cadet Speight had written under the name of 'Osebe' a piece for publication - it is reproduced in full below.