The Yorkshire Landings at Suvla

It is often thought that the first time the volunteers raised by Lord Kitchener went into action was at the Battle of the Somme in July 1916. Whilst this was the first time in the Great War that Kitchener’s men had been used in large numbers, their first action took place nearly a year earlier.

The ‘Lancashire Landing’ at Gallipoli is very well known. This heroism displayed at ‘W’ beach on 25 April 1915 by 'regulars' from the 1st Battalion Lancashire Fusiliers resulted in ‘6 VCs before breakfast’ Today, 7 August is similarly significant to the Lancashire Landings, and could, at a pinch, be described at the ‘Yorkshire Landing’. The anniversary marks the first action by Kitchener (new army) recruits other than the brief encounter with the German Navy when east coast towns were bombarded early in the war.

The combat ‘curtain raiser’ for the Kitchener’s New Armies was, surprisingly, in the UK when on 15/16 December 1914, the German Navy bombarded the east Yorkshire coast at Hartlepool, Whitby and Scarborough. The attack at Hartlepool caused the first deaths in action in these battalions when Private Leslie Turner, Private Walter Rogers, Private Alex Liddle, Private Theophilus Jones and Private Charles Clarke were killed. The Pension Record Cards for these very first 'Kitchener Army' fatalities are shown below. 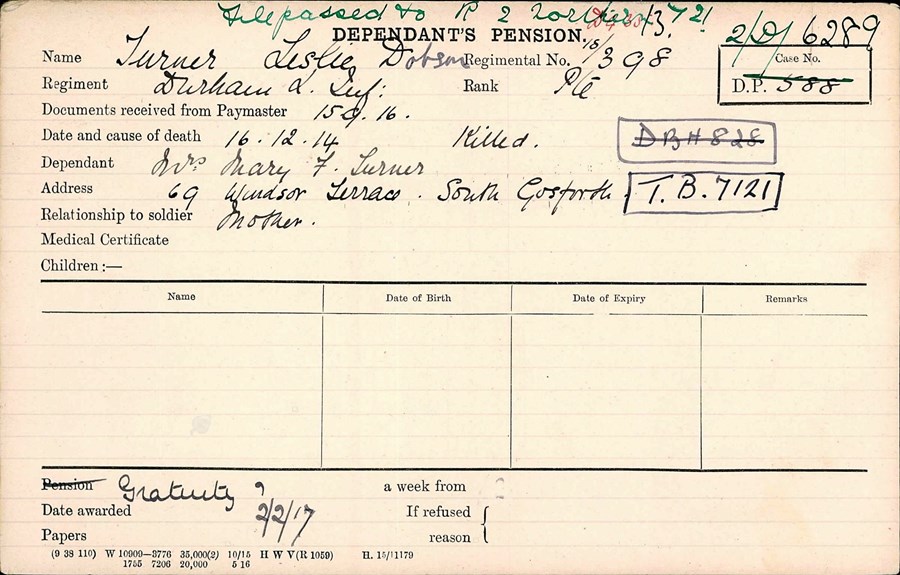 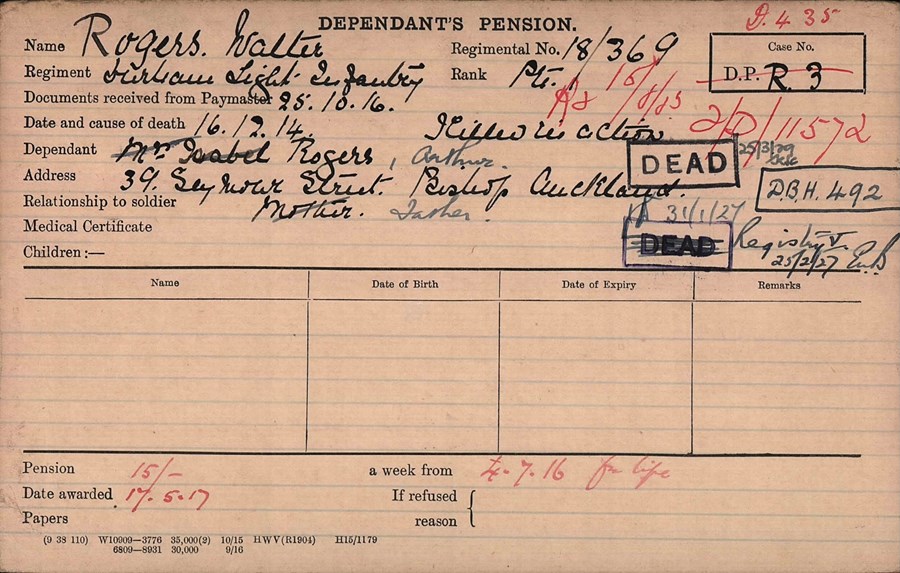 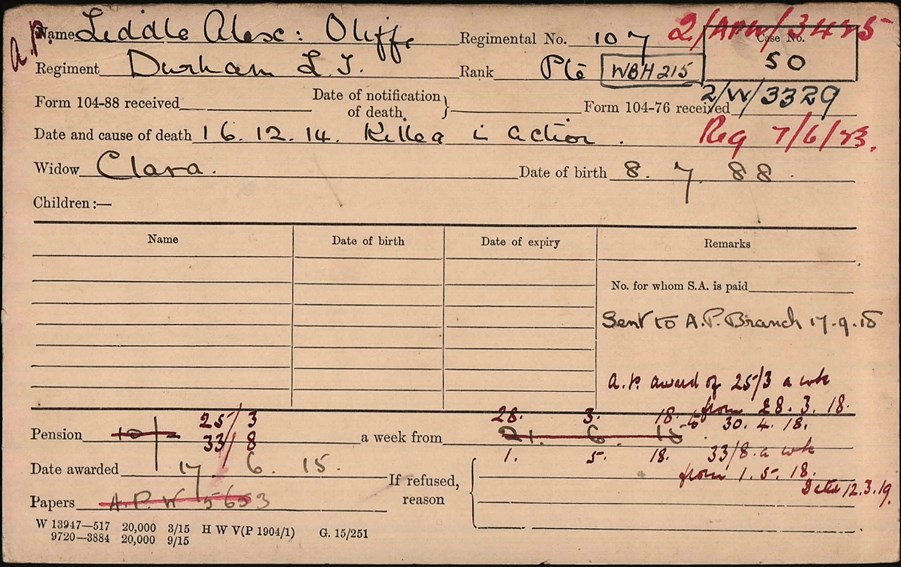 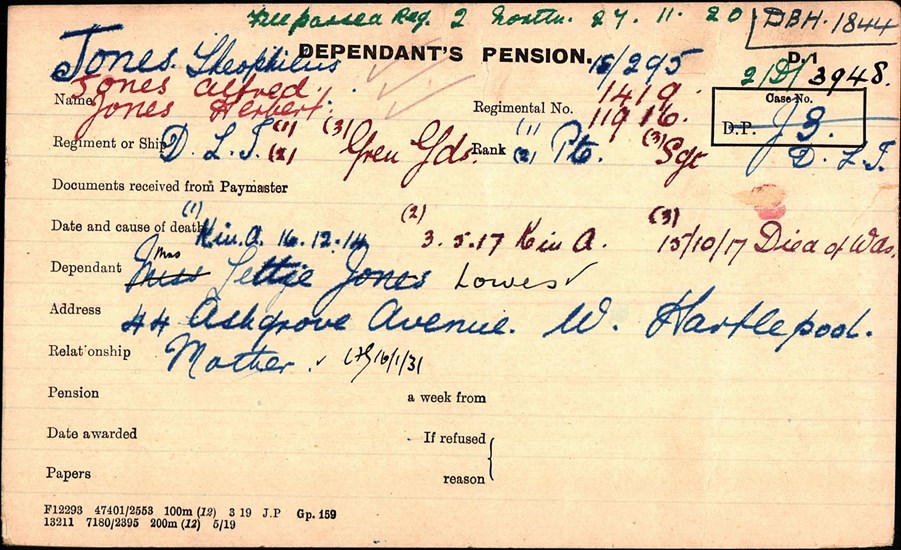 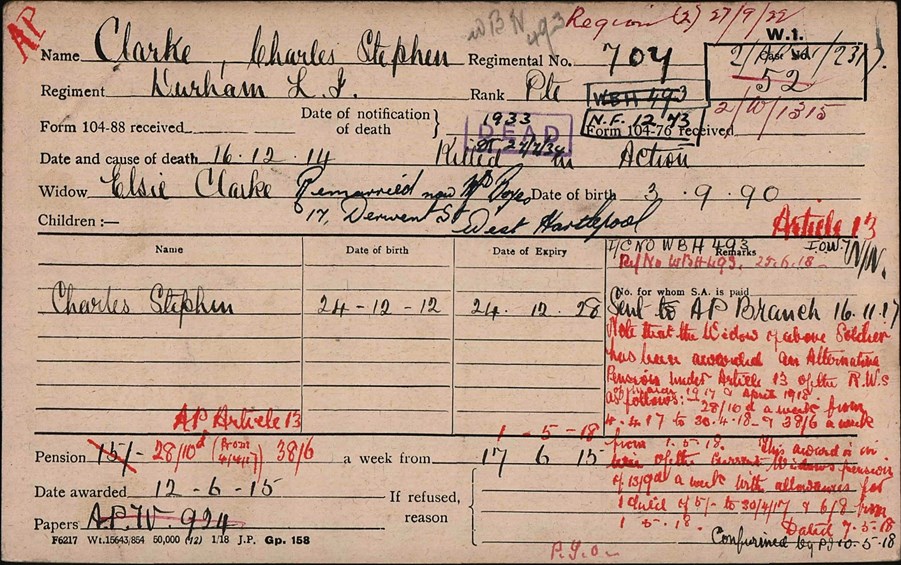 Other than this relatively minor incident, the Kitchener battalions carried on with their training in readiness for what was universally expected to be their baptism of fire in France. The volunteers of the 10th (Irish), 11th (Northern) and 13th (Western) Divisions (many of whom joined to ‘save Belgium’ or ‘rescue France’) were probably looking forward to this deployment to the Western Front. They were to have their expectations rudely shattered when these three divisions (containing about 20,000 men each) received orders to proceed to Gallipoli. Many of the men (particularly the young officers) would have been highly educated, with an understanding of the Greek Classics, and were therefore probably even more excited at the prospect of the expedition to the Eastern Mediterranean.

The campaign in Gallipoli had gone badly wrong since the initial attack in April 1915, when amphibious landings had taken place. Reinforcements for a second major attack were needed and the only troops that were available were the untried Kitchener Divisions. It was against this background that the second landing at Suvla Bay was planned for August 1915.

Although the area was only lightly defended, the Suvla landing was no easy operation. The men had received only a few months training and had not been in combat. The junior officers were equally inexperienced with just a few pre-war regulars holding senior positions. An opposed amphibious attack is amongst the most difficult of military operations, and the use of inexperienced troops for this was, with hindsight, highly ambitious. 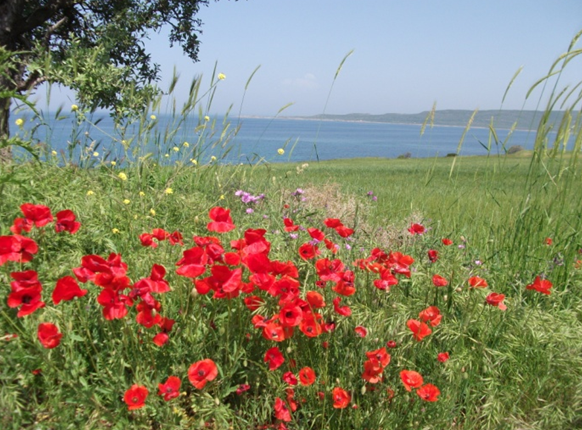 On the night of 6 August, men from the 11th (Northern) Division found themselves approaching the hostile shore at Suvla. All was not well. They were very tired – vigorous training in baking temperatures had been undertaken that morning; many were suffering serious reactions from injections, and they had only learned that they were going into action that afternoon. Maps were handed out – far too late – and no worthwhile training in night operations had taken place.

These two battalions had been ordered to secure the strategically important hill known as Lala Baba. Click here to see the area via Google Maps (scroll to zoom).

The landing was not opposed, but the assault on Lala Baba most certainly was. The Turkish defenders, although few in number, were able to inflict heavy casualties amongst the inexperienced Yorkshiremen. The junior officers, leading from the front, took disproportionately heavy casualties. Fatalities amounted to six officers and 25 ‘other ranks’ in the 9th West Yorks, and eleven officers and 56 ‘other ranks’ in the 6th Yorkshires.

The Turks were driven off Lala Baba, but little else went according to plan. Many units were landed in the wrong place, landing craft beached on shoals hundreds of yards from the beaches. Units fired on each other in confusion, orders were given and countermanded. Matters went from bad to worse as the command structure fell apart and the Divisional Commander allegedly suffered a nervous breakdown. 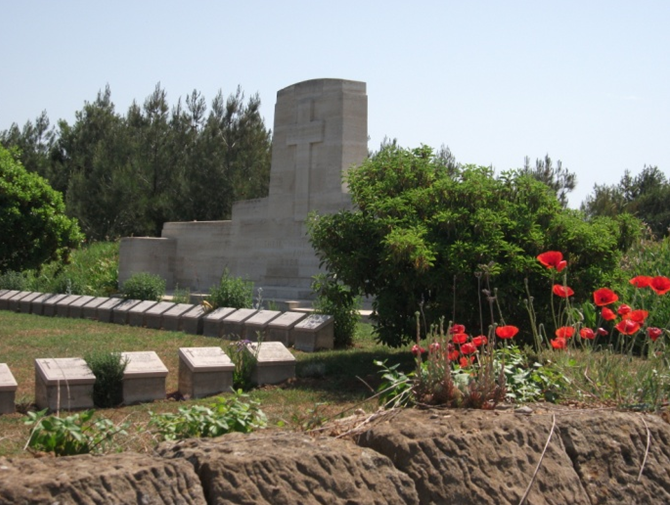 One of the young officers killed on 7 August was Captain Robert Randerson, the son of Robert and Annie Randerson of York. An outstanding sportsman, he had played for the Batley (Northern Union) football club. A teacher at St Mary’s Roman Catholic School, Batley, he was commissioned shortly after the outbreak of war. In January 1915, he received his full Lieutenancy and was gazetted captain about two months prior to his death, although only 24 years of age. 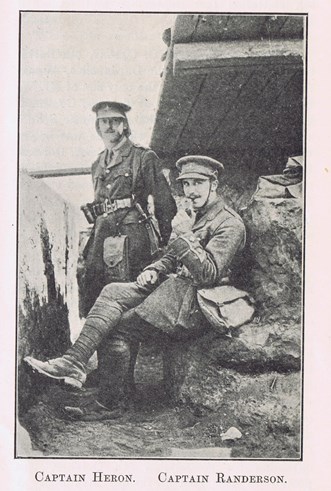 Following his death, local tributes poured in for him, with the Batley News reporting

“A pattern of good conduct on the football field, handsome appearance, of excellent physique, and a splendid teacher, his demise removes from the Heavy Woollen District one whose manifold example commends itself to the rising generation”. 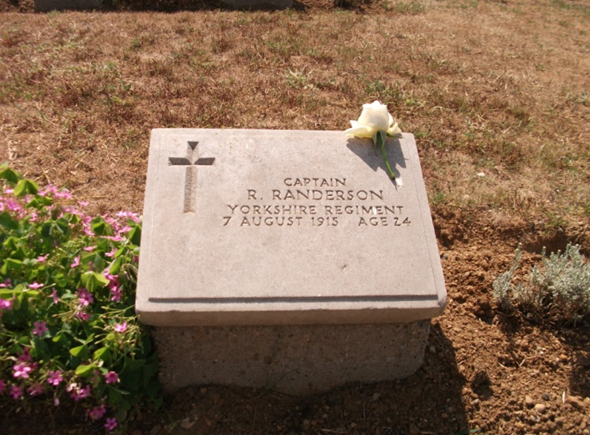 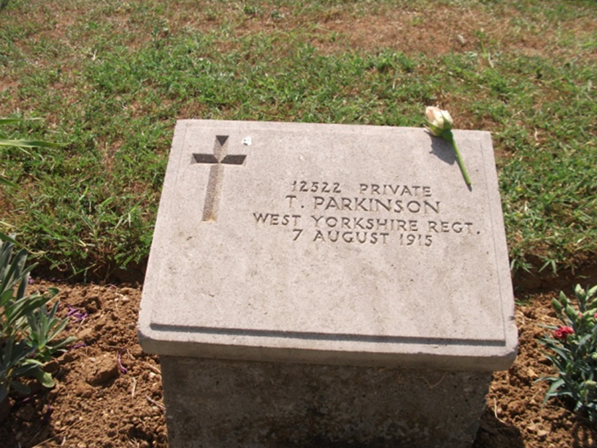 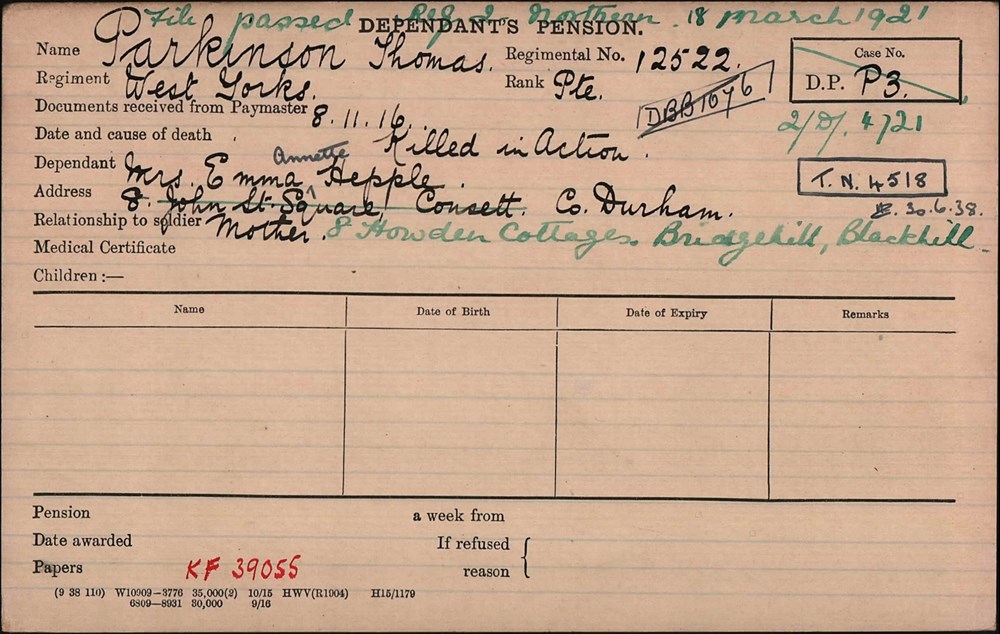 Above: The Pension Record Card for Thomas Parkinson

A career soldier, Lt Col Edward Chapman had served in the Yorkshire Regiment since 1895. In August 1914, he was at the Richmond Depot and undertook the raising of the 6th Yorkshires. After his death, the Chaplain wrote to Edward’s father

“He died as he would have wished to die – a gallant soldier leading his men, himself at the very front of the Regiment on the summit of Lala Baba……despite the hail of bullets and the shower of shrapnel which had now got the range, the Yorkshires pushed forward to the Turkish trenches on the crest of the hill. There it was that the colonel’s gifts of leadership made themselves felt. ‘Come on the Yorkshires’ he cried, and at their head with fixed bayonets, the lads he trained so well swept forward with irresistible force and the hill was ours”.

Chapman was buried at the same time as his cousin, Captain Wilfrid Chapman, 6th Yorkshires, also killed on 7 August 1915. 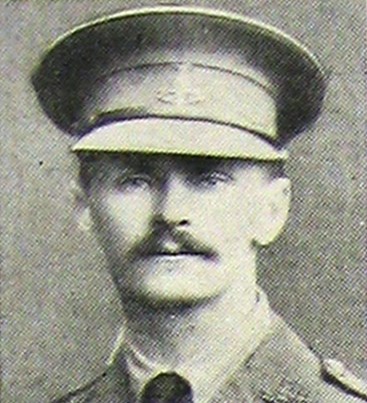 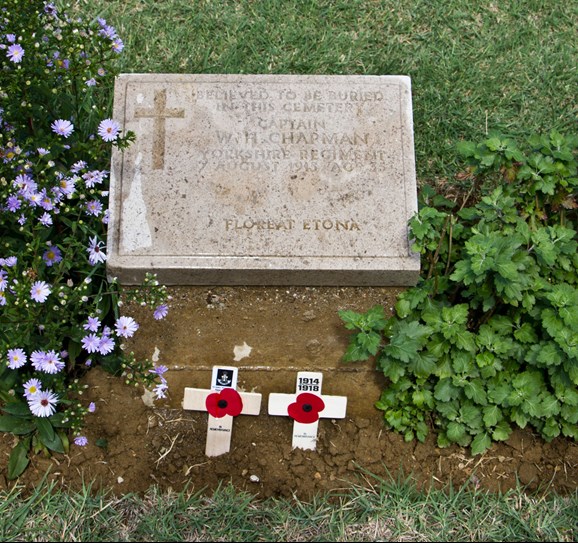 Above: Captain Wilfrid Chapman and his grave marker in Azmak Cemetery 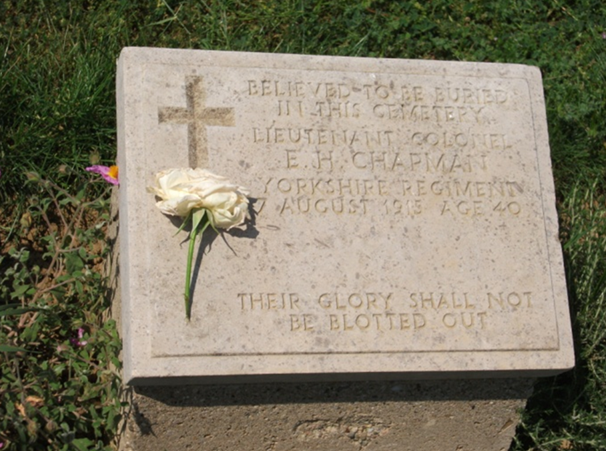 Above: Grave marker for Lt-Col Edward Chapman, commanding officer of the 6/Yorkshire Regiment, who is buried at Azmak Cemetery

Raising of the New Armies:

Gallipoli books – these are very numerous, the following four are just a sample.