Tom Roberts was born in Llanelli in South Wales, attended Park Street School, the Higher Grade School and the Intermediate School there and went on to be a student at, what was then, University College Aberystwyth. He was appointed as a primary school teacher in London and was due to start teaching in September 1914 but never took up the post. He had been in the University Officer Training Corps and volunteered as soon as war broke out being commissioned in the Cheshire Regiment.

What follows are extracts from letters he wrote home to his parents accompanied by extracts from the War Diary of his Battalion (2 Battalion) matching the dates of his letters.

ST JEAN The Bn. was called out to support 1st Suffolk Regiment at 2.00 pm owing to a heavy German attack on the left in which asphyxiating gas was used for the first time against us …. Batt. lay in field in support behind [ie to the west of] FREZENBURG …. 15 men were wounded by shellfire.

ZONNEBEKE Relieved the 1st Bn. Suffolk Regiment …. and moved into trenches in Zonnebeke.

The War Diary entries 22 April - 4 May are brief and focused on casualties. There is little detail about the Battalion’s actions. It would seem, from 2nd Lieut. Roberts’ letter home (below) that his company moved along the line (northwards) and that there was a move back (westwards) to an unused trench. The Germans appear to have been very active – attacking with large numbers of troops and heavily shelling the British positions.

…. Ever since last Thursday [22 April] night. l've been flghting in one of the most important battles yet fought in this campaign and l'm glad and proud to say that my company and the regiment played a chief part in it ….

[On Friday 23 April] …. the Germans continued their heavy bombardment of our sector of the line which they had started in the early part of the week and now l understand there is not a single house left standing in the old town of _ _ _ _ s  [Ypres, of course - a bit of self-censorship]

…. in the evening we went up to the trenches and my company went into dug-outs just behind …. a shell flew into one of the dugouts and killed three of my men, wounding three others. l did my best to save one of them who died later and nearly falnted when binding or rather attempting to bind up his wounds

…. Saturday night [24 April] ….  found we were wanted to support the Canadians who were having a bad time in the trenches, the Germans using a horrible gas which asphyxiated 50% of them ….  We started for this place which was some miles away and were under shell fire practically the whole way ….

At dawn on Sunday [25 April] the most fearful time started and for the whole of the day we were shelled from the front and from the left flank. German aeroplanes circled above us and gave their artillery all possible information. We were without the slightest information as to what was happening and we never heard a shot from our own guns nor saw a single friendly aeroplane. This nerve-wracklng (sic) bombardment went on until about 7 p.m.  The enemy advanced in thousands, the country in front being simply stiff with huge dense masses of them. lt was wonderful — we were only about I20 of us with the Captain, another sub and myself along with about 400 Terriers who had arrived in this country on Thursday, and yet we held about 6000 Germans through the night.

…. [Dawn on Monday 26 April] The Germans came on in hordes but seemed undecided as they could not find out our strength. We slowly fell back until we reached our second main line of defence about 2000 yards behind, where we found the reinforcements we had been anxiously awaiting for two days. We then took up a line of trench which was vacant and stayed there until we were relieved about midnight ….  Last night [Tuesday 27 April] we moved back …. We mustered 26 men and three officers but since then the men have been rolling back in small parties and we have not lost as many as we first thought. l was very lucky to escape with only a very very slight graze from a shrapnel bullet on my left hand and a rifle bullet through my puttee ….

This is a long letter and l hope it will not make Mam jumpy or otherwise l would wish l had not written it ….

ZONNEBEKE The whole line of troops occupying the YPRES Salient was withdrawn to the fresh line of trenches in order to make the salient much less pronounced. In the trenches occupied by the Battalion at ZONNEBEKE. One officer (Lieut. Newman) with 30 other ranks remained in occupation to cover the withdrawal of the Battalion which was carried out without any casualties.

…. The Battalion then occupied the Reserve dugouts in the GHQ Line POTIJZE.

Major A B Stone assumed command ….

I hope you have not been worrying about me for the last few days. I should have written oftener only I have had no opportunity for the last six days. I have lived through such a three weeks as I never wish to see again. We (our company) have moved all over the place, sleeping in ditches or in barns, and living on bully beef, biscuits and Jam. we are now in some hastily constructed trenches in support without room to stretch our legs. We must keep our pecker up though and hope for early relief. We are under shell fire continuously. To make things worse if has just started to rain.

VERLORENHOEK No.s 1 and 4 Coys were detailed to support the 1 Bn Welsh Reg. in the firing line ….

11 pm VERLORENHOEK No.s 1 and 4 Coys took over the section of the firing line from 1 Bn Welsh Regt. No. 2 and 3 Coys occupying the support trenches.

VERLORENHOEK: A heavy bombardment of the trenches was commenced by the enemy about daybreak and was carried on incessantly until the line was broken by a fierce infantry attack and with overwhelming numbers. Asphyxiating gas was freely used by the enemy. The positions occupied by the Batt. Head Qrs. and No.s 1 and 4 Coys were surrounded by the enemy and with very few exceptions the whole of the officers [including Major Stone, the commanding officer] and other ranks were killed or taken prisoners.

[The survivors, including 2nd Lieut. Tom Roberts, retired about 500 yards to the support Trenches which became the new firing line.]

VERLORENHOEK The Battalion under 2nd Lieut. Robert’s command [my emphasis] remained in the trenches & a heavy bombardment by the enemy was continued throughout the day ….

[Replacement troops arrived - including two 2nd Lieutenants and 216 other ranks. The following day the decision was made to relieve 2 Battalion which would move to huts west of Ypres.]

Today is the first day in which I have taken my fogs off for 25 days, you can guess what I've been through. For all this time the battalion has been fighting hard and when we marched in last night or rather the night before, I was the only officer left with I00 of my men out of 30 officers and I,000 or so men. Brin Hughes (see Battalion War Diary 8 May list of wounded) is wounded in the back but not seriously, tell his people. At one time I wished most devoutly to get one myself so as to get out of it as if has been perfect hell. Strange to say though, my nerves refuse absolutely to go wrong and here I am today after a decent sleep whistling and singing and happy as the day is long.  You have probably read all about this battle in the papers. Well, in the straightening out affair we were at the extreme end of the horseshoe line in the furthest advanced position .... It’s still a wonder to me how I've escaped but thank goodness l'm still alive and ready to kick again ….

Brin, I discover, got away to hospital alright and in a way l envy him as he will get a good long rest whereas l have been at it continuously for three weeks and don't know what minute I shall start again. I'm feeling deucedly worn out and want about a fortnight in bed but if we have to go up again I suppose l shall rise to the occasion. Keep your eyes on the papers for our casualty list .... it will be one of the biggest yet, l'm afraid ….

The War Diary records that the Battalion moved to billets in BRANDHOEK (14 May) and HERZEELE (approx. 15 km/9 miles WNW of Poperinghe over the border with France) (19 May).

Arriving home for one day 9.45 tonight.

2nd Lieut. Roberts would, therefore, have missed the inspection of 84 Brigade (of which 2 Battalion was a part) on 21 May by Field Marshal Sir John French, the C in C, in which he expressed his ‘ …. personal thanks for, and appreciation of, the splendid work …’ the Brigade had performed in what will ‘ …. be known as the Second Battle of Ypres ….’ Field Marshal French praised the Brigade’s ‘fighting qualities and bravery …. [and] truly wonderful spirit ….’

On 22 May the Battalion moved back to BRANDHOEK where 2nd Lieut. Roberts returned to it.

BRANDHOEK Battalion called out [at 4 am] …. And proceeded to YPRES following line of railway south of town and thence into trenches in Square I 10 (Sheet 28 1/40,000) from which an attack was made on enemy trenches about midnight. Battalion was subjected to a withering shellfire in the morning while attacking over open ground.

This was the ‘Battle of Bellewaerde Ridge’ in which 2nd Lieut. Roberts was killed.

With the transcript of 2nd Lieut. Roberts’ letters in the archive of the Cheshire Regiment there is some information about how he was killed. He was gassed during the attack and was taken to a farmhouse to receive first aid. Recovering sufficiently, he left the farmhouse to lead his company in another attack. He was shot in the leg and then killed by a shot in the chest.

His death was listed in the War Diary as having occurred ’24-25 May’, together with those of 4 other 2nd Lieutenants and 8 other ranks. 4 officers and 246 other ranks were wounded. One officer and 25 other ranks were recorded as missing.

His grave is in Bedford House Cemetery, Zillebeke, Near Ypres. 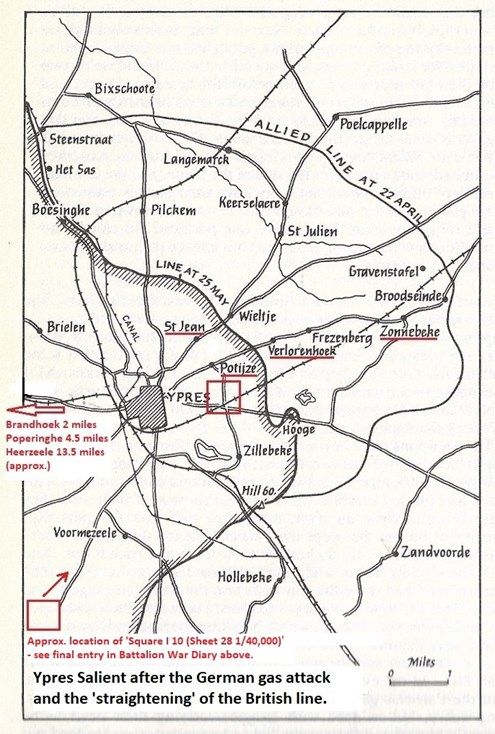 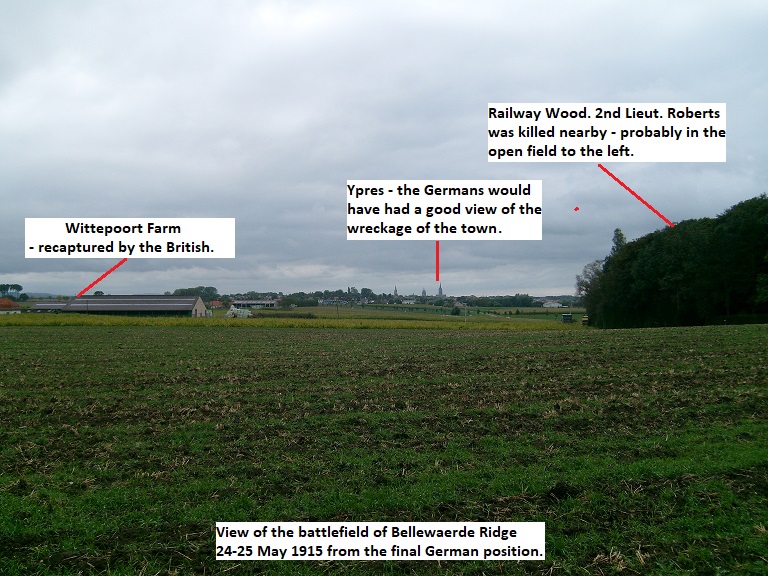 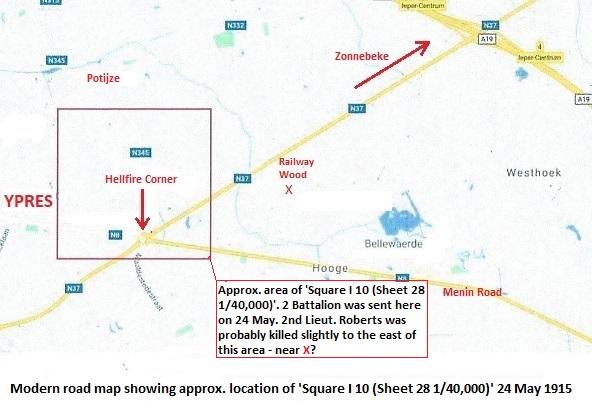 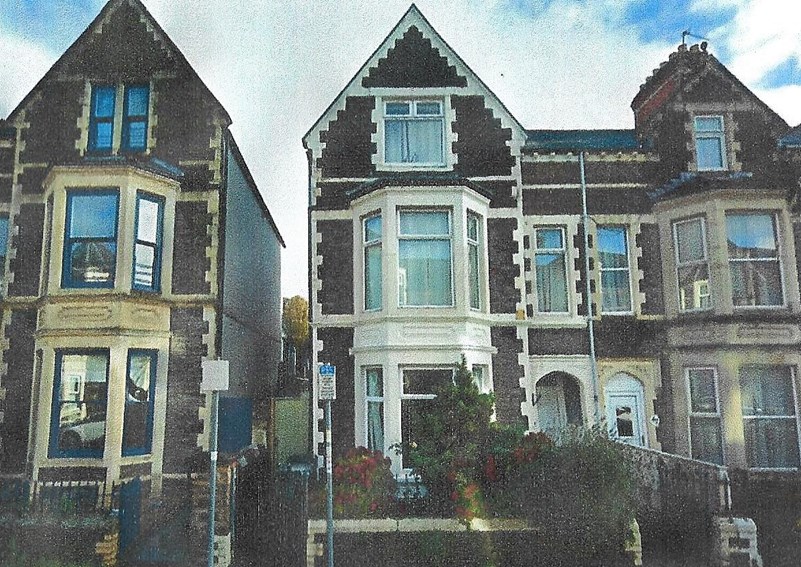 Tom Roberts’ early letters home afford an impression of how a clever and well-educated, but otherwise ordinarily middle-class young man devoid of private means, could rapidly become a member of the officer elite. Before he received his Commission he was short of money, and indeed, had to borrow £2 from his father. He was clearly dependent on the £47 grant he was to receive for uniform and equipment and in the meantime had to ask his father to provide some socks, handkerchiefs, a mending kit for clothes (the Army ‘housewife’) and binoculars. He received his grant, got together all his equipment, and was very proud to write his first cheque for £1 to his father. Not all his equipment was useful; before he left for the front he sent his sword home. He had begun his training on 1 October 1914 and reached the front line on 21 March 1915. Just over two months later he was dead.

Tom Roberts’ letters home were brought to my attention by Major John Ellis (Retd.), then curator of the Chester Military Museum which houses the archive of the Cheshire Regiment.