Using the RFC to unlock the workings of widow’s pensions

It was only in early 1915, 6 months in to the war, that the War Office began paying pensions to the widows of those soldiers who had been killed. This wasn’t down to any lack of a pension system, it was down to an inherent 6-month delay between death and a pension being paid to allow time for the man to turn up alive, and any necessary paperwork to be dealt with if he did not.

Like other branches of the Army, the Widows Pension Branch dealt with claims for men of the Royal Flying Corps (RFC). As a relatively small-sized force, the study of RFC records allows us to peer deeper in to the workings of the pension system.

Surprisingly, the first death of an ‘Other Rank’ with a widow’s pension claim was not until 15 August 1915, nearly 12 months in to the war. This man was 1483 Barnard and, in the regimental based pension numbering system then used, he was case #1. As can be seen from his card a pension was paid from 28 February 1916, 6 months after his death. 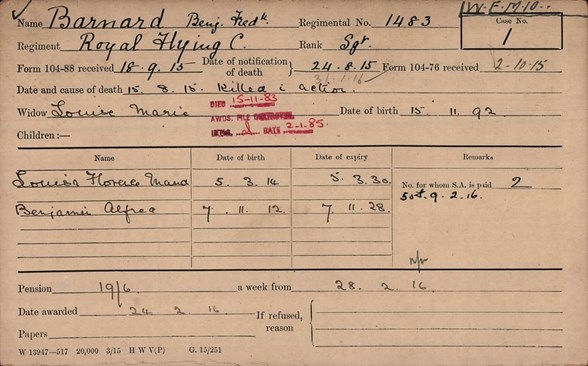 We can also see that the printed card stock on which his case is shown is dated March 1915. This was a standard card that was first printed in March 1915 and was subject to regular reprinting from then on.

A similar situation can be seen with the next 18 cards that the author looked at, with a few important exceptions. It is these exceptions that give us the window in to the procedures of the pension branch.

Number 7100 Jenkins was case #2[i], the second death to be listed for a widow's pension. 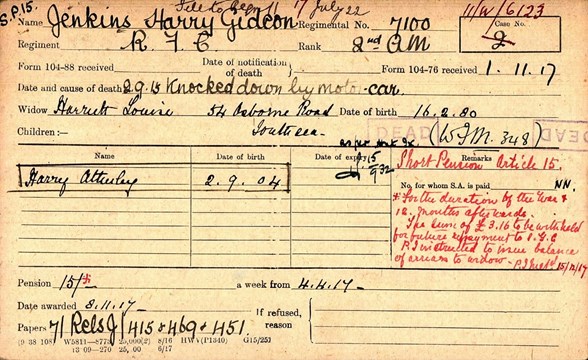 Jenkins died on 8 September 1915 due to a motor car accident. This death was not attributed or aggravated by service so no pension was initially due.

A close look at the card however will show that a pension was issued, in November 1917, and backdated to April 1917. The card stock that the card is printed on was printed in June 1917. 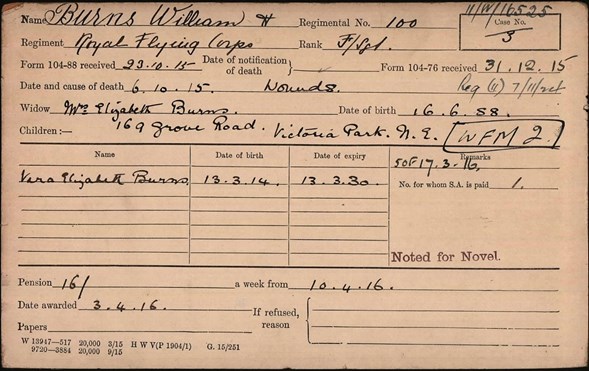 What is however strange is why a June 1917 card for Jenkins is between two cards that both date to 1915. This is not an unusual occurrence, further cards later in the range show the same pattern.

The obvious answer to this would be to say that the cards were simply written after June 1917 and use whatever cards were available, but this would mean that all the details, notes and amendments on the cards would have to have been written out and backdated – a Herculean task even for the pension administration.

Instead, we can use clues on the cards to derive the real events that the author believed has happened.

When we look at case #2 for Jenkins we can see that, sequentially, his date of death rests between that of case #1 and case #3. However, we can see that a widow’s pension was not paid until a claim was calculated under Article 15 of the Royal Warrant of 1917.

Article 15 was a specific provision that provided for a temporary pension (or ‘short pension’) to be paid where a man died and the death was not attributable to, or aggravated, by military service.  This was a new provision only introduced within the Royal Warrant in April 1917.

So, in the case of Jenkins, we have a situation where a pension was only paid due to a change in legislation, 2 years after his death, yet his pension card sits neatly between the two RFC men who died either side of his death but whose widows received pensions straight away. 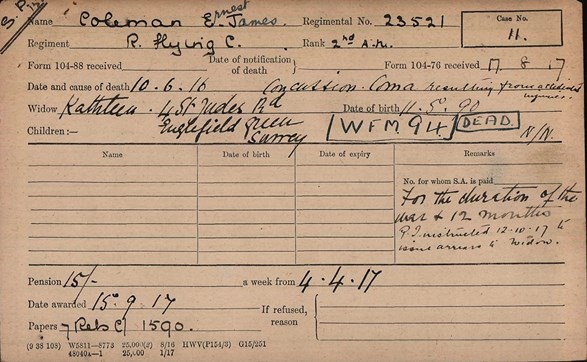 Each of the other men who have a pension card that was printed in June 1917[ii], but who died earlier and are sequenced in order of death, has the same occurrence. Each case only gave rise to a pension due to the retrospective change in legislation in April 1917.

The bottom left-hand side of Jenkin’s card, as do most of the other June 1917 cards, has space for ‘Papers’. This was the pension file or ‘papers’ used for a claim. In each case, ‘papers’ refers to the files being held in a specific registry, under reference ‘7/Rels C/’.This would suggest that the claims which were not originally paid at the time of death were lodged in to a spot in the registry in case they were needed at a later date, as would prove to be the case in 1917.

It is clear therefore that, as the deceased of the RFC were reported to the widow’s branch, a sequential list of men was created based on the date of death. For each of these cases, a file was created but, where there was no current entitlement, no pension card was created and the file was instead placed in to the registry.

When 1917 came around and the pension claims had to be re-assessed those who then qualified were removed from the registry and a card was created, using the June 1917 card stock. This card was then inserted in to the index using the previously determined case number.

At this point, we should also note that the sequence of pension cards is incomplete as several numbers are missing, apparently not having been allocated a pension claim. It would seem that the papers for these cases were filed and never pulled back for a card to be created.

This insight in to the working of the early widow’s pension branch should hold true for other regiments that were dealt with. And, indeed, when we view the cards for another unit, the Army Veterinary Corps (AVC), we can see the same situation occurs. 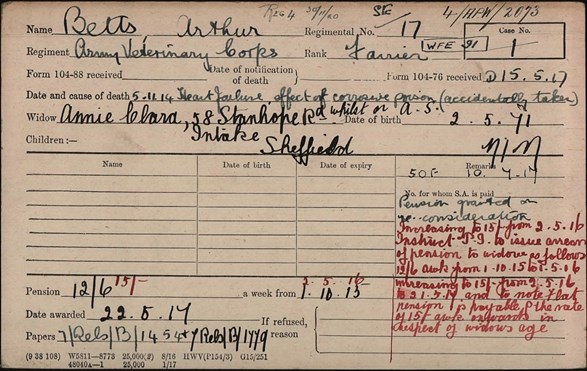 In this case, the card for number SE17 Betts was case #1. This man died on 5 November 1914 but it was not until May 1917 that the case was pulled from the registry[iii] and the pension retrospectively granted following a review of his case.

[ii] Including one man who is listed on January 1917 card stock.

[iii] This card again shows that the papers were stored in the registry 7/Rels/ but this time in ‘B’ rather than ‘C’. The letter was related to the first letter of the surname. This suggest that the registry was held by surname, rather than regiment like the actual pension awards. The registry for the disabled man’s branch is known to have held a registry index in alphabetical order.