[This Article first appears in the April 2004 Edition of Stand To! Edition 70. The entire digital archive is open to members of The Western Front Association using their Member Login details].

Readers may sometimes wonder exactly when and why Armistice Day ceased to be marked on 11 November each year, and came to be held on the nearest Sunday instead.

In Birmingham, at least, the change seems to have been due to the Second World War.

For twenty years Armistice Day in Birmingham was invariably held on 11 November. 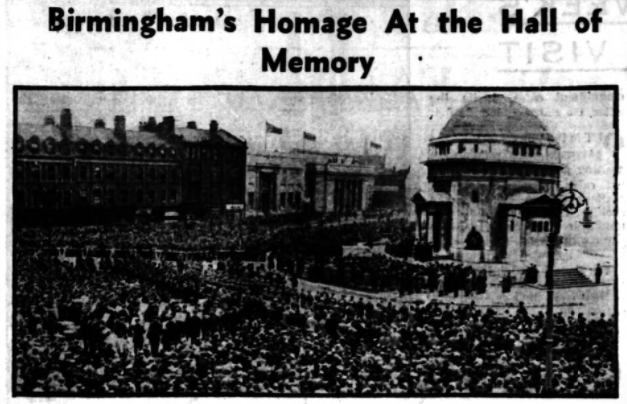 The Birmingham Post of 12 November 1938, for example (not long after the Munich Crisis) carried the following article:

Impressive Ceremony at the Hall of Memory

Complete Observance of the Silence

Although the crowd that gathers at the Hall of Memory for the Armistice Day observations tends to grow slightly smaller each year, there is no sign of any feeling in Birmingham that the virtue has gone out of the two minutes silence. Rather there has been a change of emphasis. The sense of unbearable loss that in the early years drove people to communal expression of grief has been dimmed by the passing years and the Silence has come to be a time of reflection and heart searching.

The composition of the crowd that waited so reverently in Broad Street yesterday gave proof that the anniversary is regarded as having as much significance in relation to the future as in relation to the past. In a place of honour were the Great War veterans, including badly disabled men who will bear about them all their days the marks o f the conflict. Many eyes were turned to them - the representatives of the 'little mighty band that stood for England; that with their bodies for a living shield guarded her slow awakening'. There were also however many younger people - youths and girls and school-children - representatives of a generation that cannot have a single memory o f the war years. For them also the Silence has its meaning, a meaning of great import for the future of their land. The fruits of the schooling given to the nation each year on November 11 became apparent during the recent crisis.

Perhaps in no year since the observance was instituted has the Silence been so complete in Birmingham as it was yesterday. At a minute to eleven maroons were discharged from police stations, the noise mingling with the long-drawn-out wail of factory sirens. Trumpeters then sounded 'Last Post'. At eleven all was quiet and those at the Hall of Memory were left alone with their thoughts. When two minutes later trumpeters sounded 'Reveille', all stood to attention. Workmen engaged on the erection of the new Civic Centre buildings surveyed the scene from vantage points on the tall scaffolding that has arisen, and the windows of offices in the neighbourhood were crowded with people.

As in past years the service was attended by the Lord Mayor and representatives of many phases of the city's life. The civic procession from the Council House to the Hall of Memory was led by a police superintendent and the Mace-Bearer. Behind them followed the Town Clerk, the Lord Mayor and Lady Mayoress, the Deputy Mayor and Mrs. Canning, the Bishop of Birmingham and his Chaplain (Canon T. Guy Rogers), the Rev. F. H. Benson (Free Church Council), Mr. Oscar Deutsch (Hebrew Congregation), Brigadier Charles Newton (Salvation Army), Engineer Captain D.N.Bowen (Admiralty Engineer Overseer), Col. O.D.Smallwood (Officer Commanding troops in Birmingham ), Flying Officer H.M.Mitchell (R A F ), Col. J.E .Dixon and M r. W. Parker (the British Legion), M r. G.A . Dyson (Deputy Chairman of the Justices), Mr. Walter Barrow (Pro Chancellor o f the University) and Dr. Raymond Priestley.

The service that followed the sounding of 'Reveille' was brief but impressive. Led by the Police Band, the audience sang the hymn 'O God Our Help in Ages Past', and then in a resonant voice the Bishop of Birmingham repeated the Lord’s Prayer. After the singing of the hymn 'Fight the Good Fight' the Lord Mayor placed a wreath of laurel and poppies on the podium of the Hall of Memory as the civic tribute to the sons of Birmingham. He then entered the hall and turned back the Roll of Honour to the first page.

The article concluded by describing the many floral wreaths that were subsequently laid.

During the Second World War

During the Second World War Armistice Day was a much lower-key affair, though semi-official commemorations continued on 11 November each year. The ceremony on Saturday 11 November 1939 is shown in the above photograph from the Birmingham Post. But on Tuesday 12 November 1940 the paper reported: 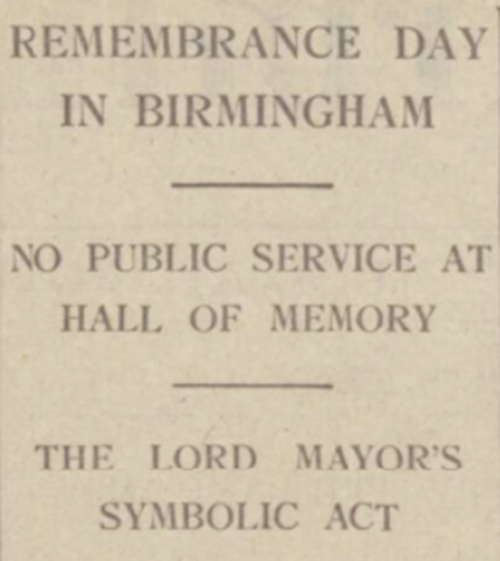 There was no public service in Birmingham at the Hall of Memory yesterday, but throughout the city there were many evidences that Remembrance Day was being observed. The Lord Mayor, who was accompanied by the Lady Mayoress, went to the Hall of Memory in the morning. There she placed a wreath of poppies on behalf of the city.

Throughout Birmingham, there were some 5000 persons engaged in selling poppies. The money thus raised will go to help naturally the wounded and bereaved of the last war, but also ex-servicemen of the present war and their families.

The Cercle of the Birmingham and District French Colony laid a wreath at the Hall of Memory. It bore the inscription 'France always faithful'. A wreath o f poppies was also placed on the grave of a French soldier who was wounded at Dunkirk, died in Birmingham and is buried at Lodge Hill.

In 1945, it happened that 11 November fell on a Sunday. On that day the first peacetime celebration of what was still called 'Armistice Day' took place at the Hall of Memory, complete with a band, a civic procession, maroons, drums, trumpeters playing 'Last Post', the Two Minute Silence, 'Reveille', hymn singing and the first verse of the National Anthem, wreath-laying and the Mayor turning back the Roll of Honour.

The change occurred in 1946. 'Armistice Day' was commemorated on Sunday 10 November, following the same format as in previous years.

As in the years immediately following the First World War, there were many young children, war orphans, accompanying their mothers in the procession of relatives of the fallen who placed wreaths at the foot of the Hall of Memory.

In 1948 the official programme spoke of a 'Remembrance Day Celebration' being held on Sunday 7 November. And thus it has remained ever since. There has been discussion about moving Remembrance Day back to 11 November. But we live in a day when to be a veteran of the First World War one has to be a centenarian; and to have any real memories of the Second World War one has to be of pensionable age. To young and middle-aged people the two World Wars are history, and thus it is perhaps best that we accept reality as far as official services are concerned, though the continuance and/or revival of holding a Two Minute Silence on 11 November itself is to be welcomed.

And finally, a supposedly true story.

A woman in the 1920s told a friend that 'My grandfather fell at Waterloo'. The friend replied: 'What platform?'

The woman described this conversation in shocked tones to another friend who commented: 'As if it mattered what platform!'

The author thanks the Birmingham Post for permission to quote from its archives.