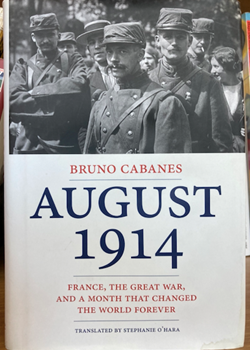 One of the positive features of modern Great War scholarship is the number of books that allow historians to understand the conflict from the perspective of another of the combatant nations. Bruno Cabanes’ August 1914 tells the story of France, and French society, in that cataclysmic first month of the war.

Cabanes not only draws on government archives and police reports but mines a rich seam of personal correspondence and diaries to present a compelling and intimate portrait of France as she grappled with the shock waves of the declaration of war on 1 August 1914. That an earthquake struck French society is not an exaggeration. Cabanes chronicles a country that witnessed the assassination of Socialist leader Jean Jaures, the mobilisation of 3.7m men and the first trickle of refugees fleeing the advancing German army.

As the month of August unfolds Cabanes provides telling insights into the rents in the fabric of French society. A German was principally a ‘Prussian’, the invader and pillager of the Franco-Prussian war of 1871. In the state of siege that the French law of ‘etat de siege’ decreed, anyone remotely ‘other’ was a threat. Cabanes cites at least one example of a German family escaping a lynch mob by seeking sanctuary in a police station.

Unlike Britain, France was invaded and occupied and Cabanes chronicles the psychological impact of the German army coming so close to the capital and seat of government. Cabanes also asserts that the scale of losses for the French army in August and September 1914 – nearly 235,000 men killed or missing – made summer 1914 the turning point of war. Historians might consider that the bloodletting at Verdun or the mutinies of 1917 were credible alternative turning points.

Although this book is a translation, that does not detract in any way from what is a compelling read. Cabanes has unearthed many fascinating insights into the upheavals of French society as it came to grips with the impact of war on an industrial scale.