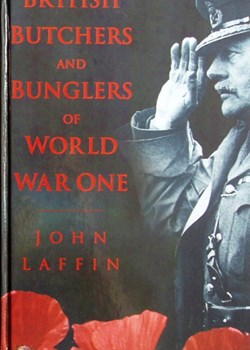 I should at once declare an interest. In July 1996 the BBC screened a Timewatch documentary on Douglas Haig. Dr. Laffin appeared as the main counsel for the prosecution, while I, along with several other historians, acted for the accused. Inevitably, the demands of television over-simplified the issues - I am by no means an uncritical admirer of Haig, although my adverse comments on his generalship ended up on the cutting room floor - yet judging by this book, Timewatch faithfully conveyed Dr. Laffin's belief that Haig was militarily incompetent, the prize donkey among a whole herd of braying, long-eared quadrupeds.

I first reviewed British Butchers and Bunglers in ST! No. 25, back in Spring 1989. Then I complimented Dr. Laffin on highlighting 'the shortcomings of British High Command', for even the most radical revisionist would hesitate to claim that all British commanders were competent and that no mistakes were ever made. However I also drew attention to Dr. Laffin's sins of omission and commission, particularly his use of evidence, some factual inaccuracies, and the dubious nature of some of his interpretations. I said that it was 'a very readable and very angry book', and the author's views were 'remarkably similar to those expressed by Lloyd George' in the interwar years.

How does British Butchers and Bunglers fare, eight years after its first publication? For a start, a number of problems identified by reviewers of the first edition have not been corrected. Names continue to be misspelt and important books published before 1988 continue to be omitted from consideration (Bidwell and Graham's Fire-Power, and Richard Holmes's biography of French, The Little Field Marshal, are cases in point). As I pointed out in 1989, some of Dr. Laffin's assertions rest on flimsy factual foundations. He supports his contentious opinion that British generals of 1939-45 'were more able strategically and tactically' than their predecessors of the Great War by reference to the lower casualty rates of the later war. Quite simply, this is comparing apples with bananas, rather than like with like. Differences in the scale of the fighting, the proportion of 'teeth' to 'tail' troops, and the theatres of war all help to explain why the casualties of 1939-45 were lower than those of 1914-18. Dr. Laffin misses the important point that when the losses of individual units are examined, the Normandy to the Baltic campaign of 1944-45 (which was the closest approximation to the Western Front of the Great War) yielded casualty rates that equalled or exceeded those of 1914-18. This point is graphically reinforced by the little known fact that in excess of fifty per cent of British military deaths occurred in the last year and a half of the Second World War - the period in which the Army was being commanded not by Third Division generals such as Gort and Percival, but the premiership team of Montgomery, Alexander and Slim.

For this reviewer, Dr. Laffin's most controversial statement is that in 1918 'the German army was not defeated and did not collapse'. I contested this assertion in my 1989 review. Both my own research in primary sources and the writings of other scholars which have appeared since that time have made me more convinced than ever that Dr. Laffin's view is completely wrong. A host of evidence demonstrates that in the autumn and winter of 1918 the Allies, with the forces of the British Empire in the vanguard, won a military victory so convincing that in November the Germans sued for peace at virtually any price. Since 1989, historians such as Bill Rawling, Paddy Griffith, Robin Prior and Trevor Wilson, and Peter Simkins - to mention but a few - have published books and articles based on solid archival research that have significantly advanced our understanding of the military history of the Western Front. None of these works are reflected in the new version of British Butchers and Bunglers.

This is a book which has passed into legend, its very title used by revisionist historians of the First World War to stand for an entire genre of 'lions led by donkeys' books whose day has now passed. Don't just take my word for it - read British Butchers and Bunglers but then compare it with a modem revisionist text based on the latest archival scholarship - say, Paddy Griffith's edited collection British Fighting Methods on the Western Front (Cass, 1996 - in which I also have an interest, in the form of a chapter). Which book do you find more convincing?

[This review first appeared in the journal of The Western Front Association Stand To! Issue 51 January 1998. This and other copies of Stand To! are available to read online to members by signing in using their Member Login] 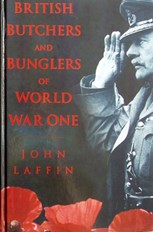