History's Greatest Heist: the Looting of Russia by the Bolsheviks by Sean McMeekin 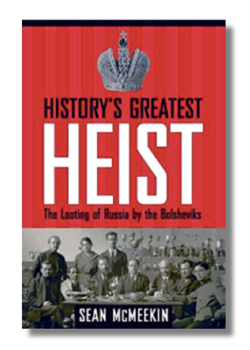 This is a factual tale of cops and robbers, mainly robbers, who claimed they were Robin Hoods expropriating the expropriators to benefit the proletariat. Almost all the gold, currency, silver, jewels and jewellery the Bolsheviks seized from Russian and foreign bankers, industrialists, noblemen and churchmen went to purchase the weapons to fight the Russian Civil War and, to a far lesser extent, finance the spread of the red revolution in Europe. Little was devoted to stemming rampant and repeated famine or improving the sorry lot of Russia’s peasants and workers. This is also the story of the Bolsheviks’ greedy handmaidens in Germany, Sweden, Switzerland and even Great Britain and America; the men who took huge commissions to broker Bolshevik trade deals in the early days.

The looting of Russia began even before the Bolshevik November Revolution. And there was a huge patrimony to steal. By 1914, Russia was in much the same position that China is today: an emerging economic and financial super power. Her reserves of gold — the period’s medium of trade — were the largest in the world. Her rail network was rapidly growing thanks to massive foreign investment; her industrial output was expanding rapidly along with her export surplus from a highly leveraged economy. In the words of Walt Rostow (The Stages of Economic Growth, Cambridge, 1960), Russia was in a takeoff position to join America, Germany and Great Britain as a world economic and financial power.

Between 1918 and 1922, the Bolsheviks exported Russia’s moveable riches overseas to finance purchases of arms, ammunition, railways locomotives, motor vehicles as well as luxury goods for Communist apparatchiks. In this, they were aided and abetted by bankers and government officials in Sweden (where tons of Russian gold was melted into ingots by the Swedish mint), Germany and even Switzerland and Great Britain. The British for a time maintained a naval blockade of Russian Baltic ports, but the Anglo-Soviet trade agreement of 1920 and the Soviet-German Rapallo Pact of 1922 effectively shattered the post-war economic and financial boycott of the Soviet Union and largely re-established former trade patterns assuring the economic survival of the Soviet Union even as the looted Tzarist gold hoard was exhausted.

This review first appeared in Stand To! No.86 (August/September 2009) by Len Shurtleff