Staring at God: Britain in the Great War by Simon Heffer 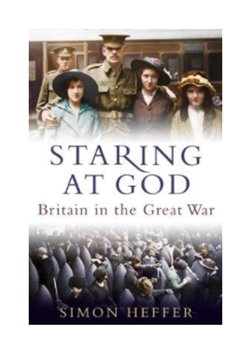 Before offering my opinion of this book, I own up to reading the publishers press release which, as always, accompanied it. It offered the opinions of reviewers from leading magazines and the national press.

The views selected were, as is usual, universally highly favourable. Comments ranged from – 'riveting' to 'magnificent' and from 'balanced and judicious' to 'A remarkable intellectual and literary achievement'. In their own way, such peons can distort the quality of a book as much as heap discredit on an author’s best efforts. When faced with reviewer’s hyperbole or acid criticism my view is, always the same. 'I’ll make up my own mind about that thanks'. I have.

Let me save the reader time.

The quoted reviewers’ praise for ‘Staring at God’, every word of it, seems fully deserved. The size of the work marks a long read – 825 detailed pages, and offers excellent, clear, index, bibliography, notes and references.

After reading Heffer’s book it became clear that I could not better the words of Andrew Roberts review in the Daily Telegraph. He stated that 'the book is the first serious and wide–ranging history during the war for decades'.

As both he and others have noted this is not a work of military history, but one which skilfully examines the politics, social, cultural history and effects of the war on Britain during the Great War. The author offers clear, cogent and fascinating analysis of Britain’s wartime Government.

Initially it was led by the often–distracted and alcoholically bibulous Asquith, who contrived to write indiscreet passionate personal letters of love to Venetia Stanley during cabinet meetings. Under the dictatorial Lloyd George, the government struggled mightily – if not always efficiently or productively – to cope with the vast, and constantly ferocious tides of war on the nation’s industry, its industrial relations, its finances and its people.

Throughout Simon Heffer’s analysis is deep, deft and figured with fascinating, and relevant, statistics and overviews of the ‘cast of players’ and their foibles. The reports of the effects of war–fighting remain background although Heffer evaluates them, their results, and judges the government’s reaction to them.

He contextualises events – their nature, influence and effect alongside the cavorting honesty and dishonesty of politicians, senior members of the services and the press between 1914 and 1918 judiciously.

As Gerard De Groot’s review notes, 'Heffer is an equal opportunities critic – almost no one escapes reproach'. The evaluation of the effects of war on the government, population, industry is often surprising.

The degree to which the nation’s morale had decayed by 1917 was, to this reviewer, a major surprise. Heffer underlines the corrosive effects of war within government and the public of increasing unnecessary restrictive legislation and inflation. To this can be added the massive growth of national debt, major food shortages, rationing, constant industrial actions – official and wildcat strikes – constant demands for higher pay – in the mines and in industry.

Other factors confronting government included the Irish problem, and the failure to solve it, recruitment, shortage of troops in the line and, at home, passivism, wartime work by women and the intensity of efforts to increase recruitment by changing age limits.

Added was the spectre, the national concern, about the growing influence and consequences of the Russian Revolution in Britain and the apparent unlikelihood of a successful end to the war.

Not least the chapter titled Dictatorship reveals much of the Lloyd Georges’ malignancy, his determination and the nature and extent of his lies to the nation and to colleagues which fully blossomed and fruited once he became Prime Minister.

Here are revealed the many key political decisions and their making, as well as the often malignant actions of the press barons. As the book underlines LG was frequently, justifiably, condemned for much of his behaviour and his lack of propriety both before and during the war. He has been rightly criticised for his unwillingness to appear in the House of Commons, personal cowardice, habitual lying and dissembling, for ‘flogging off’ peerages.

Although Douglas Haig’s military leadership does not go without criticism by Heffer, Lloyd George’s failure to meet Haig’s frequent and justifiable requests for more troops (from amongst the huge number unjustifiably retained at home) because the Prime Minister judged that to bring up the numbers in the BEF’s ranks would encourage Haig to embark of more battles like the bloody Somme and Passchendaele.

To this can be added Heffer’s evaluation of the prime ministers dislike of the highly competent Chief of the Imperial General Staff, Robertson. A man willing to tell Lloyd George the unsayable truths and the prime minister’s decision to Stellenbosh him and replace him with the more compliant Henry Wilson – a soldier who claimed himself to be the ugliest man in the British army – and had a nature to match.

LG remained unwilling to accept warnings from Haig, Robertson and others of the likelihood of a massive German offensive in spring 1918, an inevitable consequence of the Germany victory over Russia which allowed a large number of divisions to be transferred to the Western Front. One can also add the Prime Minister’s directive to Haig to sack Hubert Gough in 1918. Whilst reasons for degumming Gough may well have existed for effectiveness as an army commander before the German Spring Offensives still seem unjustified and mean, after Gough’s performance – and that of his army – in the spring fighting.

Heffer’s book is an endlessly fascinating work on the British and Britain during the Great War and one greatly deserving recommendation.

NOTE > Shop around, the hardback, at the time of uploading this review (18 January 2021) Staring at God: Britain in the Great War by Simon Heffer was available at price range (with free UK delivery) of £28.53 (Amazon) to £20.57 (Goodread) - with various cheaper secondhand and paperback edtitions available too.