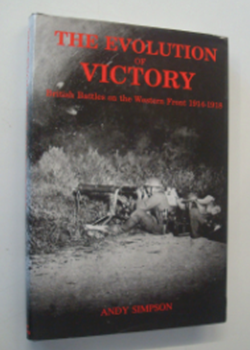 [This review first appeared in the September 1996 edition of Stand To! No. 47]

The fighting on the Western Front means different things to different people. For the majority of the population, it is a terrible, apparently senseless event, essentially outside normal history; a phenomenon which can only be explained by blaming the bungling, stupidity and lack of imagination of the generals.

Many people see literature, especially poetry, as the only way of comprehending the enormity of the experience. Thus they remove conventional military history from the equation almost altogether. Some academic historians have challenged this view in recent years, but these ideas have made little headway among the general public. Even in 1996, books and television documentaries appear which do little more than rehash the stale ideas of ‘lions led by donkeys’ school. The appearance of Andy Simpson’s very readable book is thus exceptionally timely.

The Evolution of Victory is a slight book but an important one. Andy Simpson, who is also working on an eagerly-awaited study of the corps level of command, traces the development of the British army in battle from Mons to the Armistice.

His technique is to combine narrative with tactical and operational analysis. Following the pattern of his last book, ‘Hot Blood and Cold Steel’, Simpson includes hefty chunks of firsthand accounts of the fighting - demonstrating the importance of what Paddy Griffith has described as ‘tactical snippeteering’ discovering significant tactical detail in eye-witness material. Simpson clearly Sets out the essentials of the revisionist case: 'that the "donkeys" who led the BEF were prepared to accept the introduction of technological and tactical change on an unprecedented scale'. The BEF's learning curve was indeed steep, but by 1918 this willingness to innovate had created a formidable instrument of war. Far from the Western Front being ‘outside’ history, this book demonstrates the central place which the fighting of 1914-18 occupies in the development of modem warfare. Those who doubt that tactics underwent significant changes during the war should compare Simpson's comments on artillery at Mons and Le Cateau in 1914 with his analysis of gunnery at Cambrai in 1917.

The Evolution of Victory is short - only 152 pages - but it reads almost like a sketch for a major book, an hors d'oeuvre rather than a main course, but it makes up in accessibility what it lacks in length. It is required reading for everyone with an interest in the Western Front, if only to show that there is another perspective to set alongside that of Paul Fussell.