A youth of radiant promise

On 30 August 1917, Francis McLaren, Liberal MP for Spalding, was killed in a flying accident while training with the Royal Flying Corps. Second Lieutenant McLaren was trainee pilot in Number 18 Training Squadron (RNVR) when he died during training at RAF Montrose. His aeroplane, an Avro 504 A nosedived into the sea off Montrose. 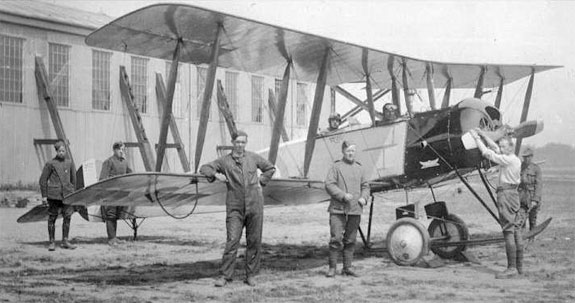 He was rescued by a fishing boat, but did not regain consciousness and died of his injuries before reaching land. 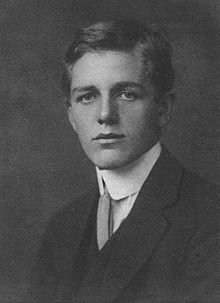 McLaren was the only Member of Parliament to be killed during the First World War whilst serving in the RFC or RAF. Paying tribute to him in the House of Commons later that year, the former Prime Minister, H. H. Asquith, whose son, Anthony, and daughter, Violet, had been a page and a bridesmaid at McLaren’s wedding in 1911, declared that,

McLaren was first elected for the Spalding division of Lincolnshire in January 1910, when he became the youngest Liberal member of the Commons, aged 23. His entry to Parliament was undoubtedly aided by his family’s impressive political pedigree. In his first Parliament he served alongside his father, Sir Charles Benjamin Bright McLaren (1850-1934), Liberal MP for the Bosworth division of Leicestershire. His older brother Henry (1879-1953), who had sat for West Staffordshire from 1906 until January 1910, joined him in the House in December 1910, when he replaced their father as Bosworth’s MP. Further political connections came through his brothers-in-law, Reginald McKenna (Home Secretary and then Chancellor of the Exchequer), and Henry Norman, another prominent Liberal MP. Both McLaren’s grandfathers had also been MPs.

Francis McLaren’s war service began with the Royal Naval Volunteer Reserve when was commissioned as a lieutenant in September 1914, and left for France a month later. 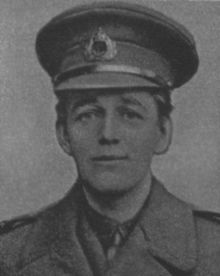 According to his fellow MP, Josiah Wedgwood, McLaren ‘had got overseas by offering his Rolls-Royce car to the General with himself as chauffeur’. A chance encounter between McLaren and Wedgwood at Ostend led McLaren to join Wedgwood in the Royal Naval Armoured Car Division. He assisted Wedgwood in recruiting and organising four new squadrons of armoured cars. They were initially based at Wormwood Scrubs, where, Wedgwood recollected, ‘each morning Francis drove me … never quite late, but always at 60 m.p.h.’ He also recorded that McLaren, who had ‘the manners and bearing of a Prince of the Blood’, would ‘vanish nightly for bridge with the Asquiths in Downing Street’. Despite these foibles, Wedgwood was close to McLaren, who ‘always behaved to me as a son to an indulgent father’.

After further training at Henley-on-Thames and in Norfolk, McLaren and Wedgwood’s lobbying of Asquith and Churchill persuaded the Admiralty to send armoured car squadrons to Gallipoli. They arrived on the island of Lemnos in April 1915. Concerned that the armoured cars might be left without a role, McLaren persuaded Wedgwood to let him transfer to HMS Doris as an observing officer, which meant that he missed the landing of the River Clyde at V beach, Gallipoli on 25 April. As operations continued, in early May Wedgwood was injured by shrapnel. He credited McLaren with saving his life after he searched for him on the hospital ship and insisted that he be operated on immediately. In Wedgwood’s absence, McLaren commanded the armoured cars in a futile attack on the Turkish defences at the third Battle of Krithia on 4 June, the only occasion on which they were deployed during this campaign.

Having contracted dysentery, McLaren recovered at home, and was then commissioned as a second lieutenant in the Royal Flying Corps on 1 January 1916. Ill health during his training at Brooklands meant that he was invalided out late that year, but he ‘besieged the War Office’ to protest against this decision, and was reappointed as a second lieutenant in June 1917. He had almost completed his advanced training when he was killed.

McLaren was buried in Busbridge churchyard, Godalming, Surrey, where his grave is marked with a carved oak headboard designed by Edwin Lutyens. She was the niece of Gertrude Jekyll, the garden designer, who had worked closely with Lutyens. Barbara was also responsible for the selection of Lutyens as the designer of the Spalding War Memorial, where McLaren is commemorated. 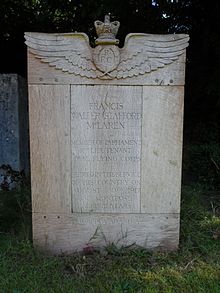 He is commemorated on Panel 8 of the Parliamentary War Memorial in Westminster Hall, one of 22 MPs that died during the First World War to be named on that memorial.