The Great War of 1914-1918 was a truly global conflict which was felt in countries like Sri Lanka (then known as Ceylon), an island nation in the Indian Ocean located thousands of kilometers away from Europe. Since Sri Lanka was under the British rule at that time the war had an impact on Sri Lanka in many sectors including its trade and economy.

With the outbreak of the war, many energetic individuals of the community of British nationals serving in the island as state servants, in the estate sector and in companies dedicated themselves to military service. For instance, a considerable number of British youth employed in the plantation industry, the major sector of Sri Lanka’s then economy enlisted in various regiments and served in the Great War. Following this example, some of the educated local youth also served in the war.

Some of these men made the died during the War. When the war concluded in 1918, the state and the public erected war memorials to honour and commemorate the fallen soldiers. The chief war memorial or the Victory Tower was built in Colombo with 442 names of the fallen inscribed on it. In addition to this, monuments were erected in some district and provincial capitals where fallen men were residing and in institutions where they were members or employees before the war. There are nearly twenty of such monuments in Sri Lanka which includes obelisks, clock towers and plaques. 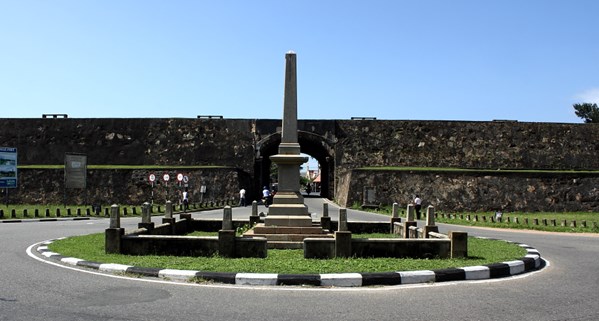 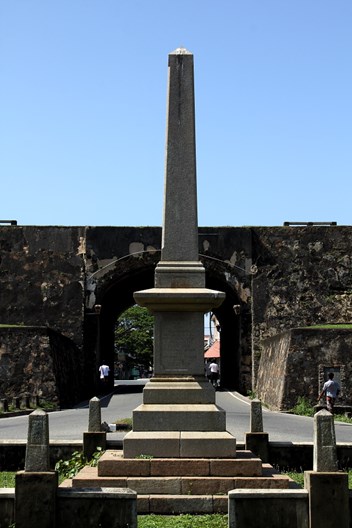 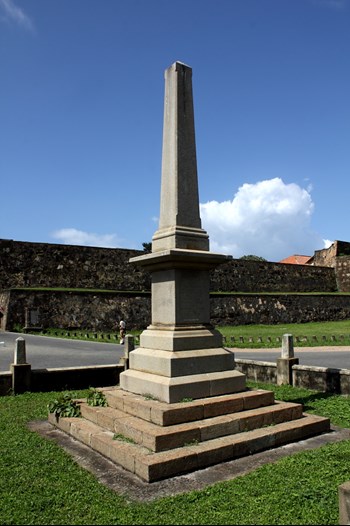 Galle is the capital city of the Southern Province of Sri Lanka. This coastal city is the home for a port which was a key harbour of the country. The war memorial in this city is situated in front of the New Gate of the 17th century Dutch fort. It is a small obelisk that bears the names of seven fallen men from the district.

As per the records, Galle War Memorial was initiated by the District Planters’ Association. The Chairman of the Municipal Council of Galle, in his Annual Report for 1920, mentioned that “the Council on the application of Galle District Planters’ Association granted the portion of the ground opposite the New Gate as the site for the obelisk to be erected as a public memorial to those from the Southern Province who fell in the Great War.”

The erection of the monument took some months. Meetings and discussions were held with the participation of various persons since early 1920. R.B. Hellings, the Government Agent of the province, mentioned of several such discussions in his official Diary. The meetings were with representatives of the Planters’ Association on this matter, with the District War Memorial Committee etc. The Government Agent was a member of the War Memorial Committee, which comprised of both British and local individuals. It seems that the cost of the monument was covered from public subscription. Meanwhile construction of a war memorial hospital or a ward was also in the records.

Finally, the Galle War Obelisk was unveiled during a ceremony performed by the Government Agent, R.B. Hellings in the evening of 28 February 1921. The obelisk was draped with the Union Jack flag and on sides it was draped with the flags of the United State and Italy. The Government Agent mentioned that that was the most opportune time for such a monument as the war days were on the point of being forgotten. Mentioning the men who laid down their lives and in whose memory the monument was built, he said that “… this memorial will ever stand to posterity of as an emblem of sacrifice.” A member and the secretary of the War Memorial Committee addressed the gathering too. A large gathering was present at the unveiling of the monument and the event was well reported in newspapers.

News of the unveiling of the monument (The Times of Ceylon, 3 March 1921)

The war memorial is a granite obelisk set on a multi-stepped base. Four of the bases of various sizes contain inscriptions. The total height of the monument is about 3 meters. The monument is encircled by the square shaped low wall. Although it was relatively short, the monument possibly looked better in the past as it was facing the esplanade in front of the fort, where recent development of a Cricket Stadium had blocked the view of the area.

The inscriptions of the first and second bases seems to have had letters made from metal fixed to the panel, where only the drilled holes are seen at present. Other two bases have inscribed letters. 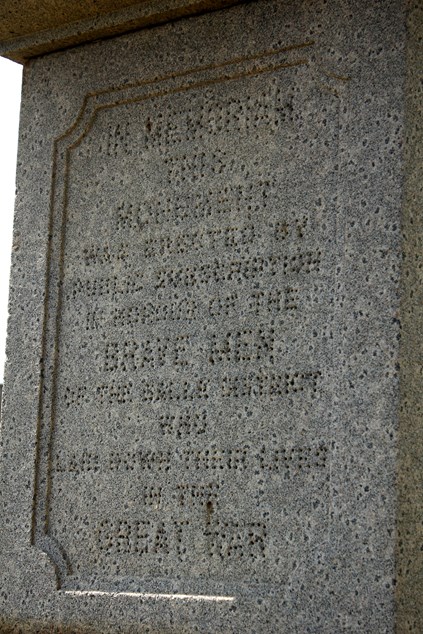 Although seven names are mentioned in the monument, only six of these names are decipherable at present. The six people commemorated in the memorial are as following. 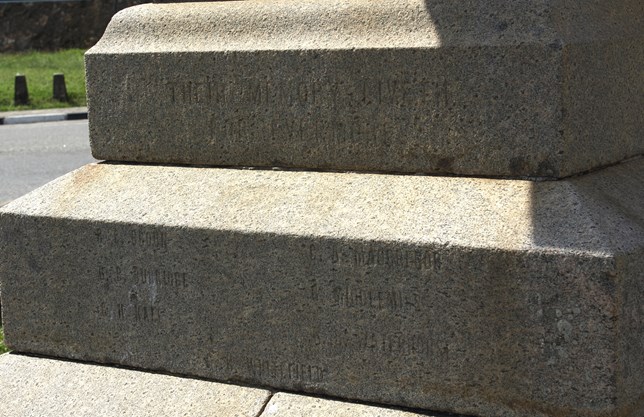 Broun, R.C.M. –Lieutenant Richard Clive McBryde Broun was an assistant superintendent at Nakiadeniya Group, which was a rubber and tea plantation in Nakiadeniya, in Galle district. When the war broke out, he enlisted with the Ceylon Planters Rifle Corps at Diyatalawa, in September 1914. Broun was a Second Lieutenant of the 6th Battalion, of the Royal Dublin Fusiliers and was promoted a Lieutenant few weeks before at the time of his death. Broun was missing and believed killed on 6 December 1915 at Salonika, Greece. His name is mentioned in Doiran Memorial, in the north of Greece. 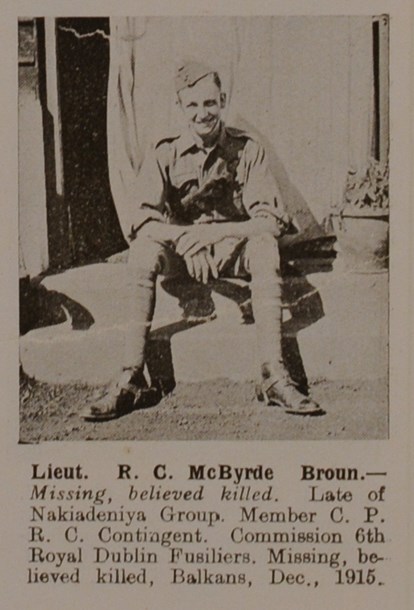 Burridge, G.B.–Lieutenant Guy Biddulph Burridge was born on 26 May 1889. He was the son of Charles H. and Margaret H.B. Burridge of 24, Addison Mansions, Blyth Road, Kensington, London. At the time when the war commenced, Burridge was a planting student in Ceylon and was stationed at Nakiadeniya in 1913-14. Details of his enlistment are scanty and records mention he received Military Cross in February 1916. He was a Lieutenant attached to 45th Battery, 42nd Brigade of the Royal Field Artillery at the time of his death on 4 May 1918, when he was 28 years of age. His grave is located in Sandpits British Cemetery, Fouquereuil, Pas de Calais, France.

Kale, C.H. –Private Charles Hans Kale was the son of John Alexander and Maria Elisabeth Kale of He was a Non-Commissioned Officer of the Ceylon Light Infantry, a local force formed in late 19th century. He joined the Army Veterinary Corps within few months from the war and was once wounded at Dardanelles and invalided. In a letter written by him in July 1915, while at YMCA Army Department at Alexandria, he mentioned of his willingness to return to the front. Later he again met with an accident while in the UK and made invalided in 1916. However he was able to join the Coldstream Guards in 1917 after passing medical board where he served as a private of the 5th Reserve Battalion. Kale was known in Sri Lanka for his courage shown in dedicating himself for war service. He was wounded again and died due to the wounds on 9 August 1918. He was 31 years aged at that time, but a local record mention he was 39 years old. His grave is situated in the Brompton Cemetery, Kensington, London. 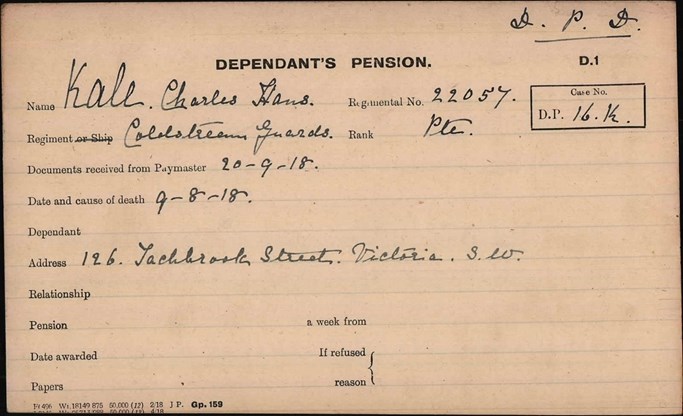 MacGregor, C.A. Second Lieutenant Colin Alexander MacGregor was born on 21 May 1886 in South Kensington to Alexander and Edith MacGregor. Records suggest that he was employed in Ceylon as a planter around 1907, and he was in Pussellawa are before moving to Galle. He served as a private in the Ceylon Planters’ Rifle Corps before the war. He seems to be enlisted soon after the war broke out. He was initially attached to A.S.C. and then was transferred to 9th Battalion Gordon Highlanders later. He was a Second Lieutenant at the time of his death during the Battle of Loos on 26 September 1915. His body was not found and he is commemorated on the Loos Memorial to the missing at Dud Corner, France. It is mentioned that, MacGregor’s name is also found on the University of Birmingham War memorial and, as a member of Epsom Golf Club he is also commemorated on the memorial in their clubhouse.

Middlemiss, G.–Rifleman Guy Middlemiss was born at Rawalpindi, India. He was the son of C.S. Middlemiss and Mrs. Middlemiss, of Srinagar, Kashmir, India. He was educated at St. John's School, Leatherhead, Surrey. He served as a planter at Baddegama Estate, Baddegamain 1913 but a local record mentions himself as from Talgaswala, Elpitiya. With the outbreak of war, young Middlemiss enlisted in September 1914 with the Ceylon Planters’ Rifle Corps at Diyatalawa in September 1914 and served as a rifleman of it. He was killed on 6 May 1915 due to the wounds he received at Gallipoli. He was 23 years old at the time of his death. His date of death was incorrectly informed as 9 May and later it was corrected. His grave is located at Beach Cemetery, Gallipoli. 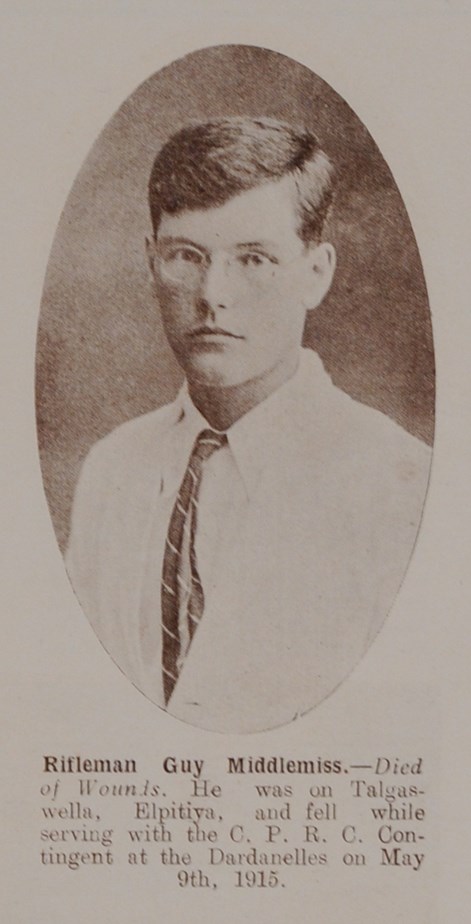 Whitfield, G.H. Second Lieutenant Gilbert Henry Whitfield was educated at Charterhouse School, and then studied engineering at Kings College from 1906-1909. He has taken up planting in Ceylon in 1909 was stationed at Bandarapola and Gammaduwa, Matale, later on Thornfield, Agrapatna, and finally on Sunny Side and Baddegama Estates, Baddegama. Whitfield enlisted in September 1914 with the Ceylon Planters Rifle Corps at Diyatalawa. He was a Second Lieutenant and served in Indian Army Reserve of Officers, attached to the 14th King George's Own Ferozepore Sikhs. He was reported missing and believed killed on 8 August 1915 during the fighting at Gallipoli. His name is mentioned in the Helles Memorial. 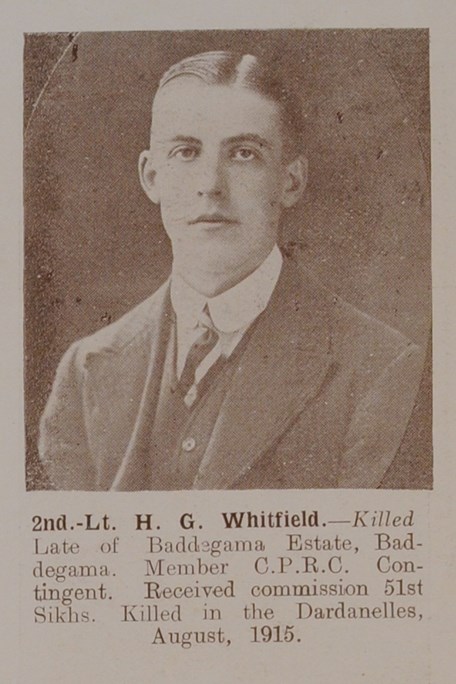 Administration Report of the Chairman of Municipal Council of Galle for 1920 (Sessional Paper 20 of 1921.

Administration Report of the Government Agent of Southern Province, 1920

Photos of the fallen men: Times of Ceylon Christmas Numbers