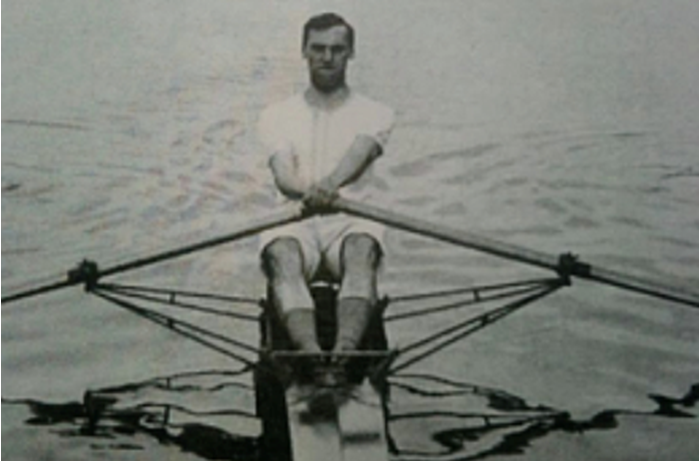 Frederick 'Sep' ‘Cleg’ Kelly, the Olympic gold medal rower, pianist and officer in the Royal Naval Division who was killed on 13 November 1916 on the opening day of the Battle of the Ancre.

The seventh child (and this his name) of a wealthy wool magnate from Australia, 'Sep' along with five of his brothers was sent to England to be educated at Eton. Frederick then went up to Balliol College, Oxford to read history … and row.

Although his passion was music and composition, he was dissuaded from following a career in music by his father. He hardly focused on his academic studies though was he barely scraped through with a degree - his life being spent on the river. On his father’s death in 1901 and that of his mother in 1902 ‘Sep’ or ‘Cleg’, as he was known, was then able to concentrate on his joint passions of rowing - going on to win gold at the Olympics in London in 1908 and music performance and composition.

On the outbreak of war in 1914 Sep immediately enlisted in the newly formed Royal Naval Division. He went on to serve in Gallipoli where he was awarded the Distinguished Service Cross for actions during the evacuation. Promoted to Lieutenant-Commander he then went on to serve on the Somme. It was here, on 13 November 1915, while leading an an attack on a German machine gun emplacement at Beaucourt-sur-ancre that he was killed. He was 35 years old.

Of the eight who rowed to gold at the 1908 London Olympics, six served, three were killed in action, a seventh would appear to have remained with the shipbuilding company on Tyneside he had joined a decade earlier and the eight, a doctor, had died having contracted gangrene while undertaking an operation on a patient.

Over the years the late Stand To! editor Jon Cooksey co-write and produced several documentaries for the BBC in collaboration with BBC Senior Broadcast Journalist and Sports Editor Graham McKechnie.

The other seven rowers: