During the late part of the First World War the Army Medal Office began a system of making out an index card for each individual soldier (officers and other ranks). This was in order to create a record of the individual's entitlement to campaign medals and gallantry medals.

The Medal Index Card which were created include some or all of the following:

Some of this information may be shown on the reverse of the card.

A few years ago the Ministry of Defence was looking to dispose of the Medal Index Cards. There was a very real danger that the cards would be destroyed. Although the cards had previously been copied, this had only been done in low quality monochrome - and the reverse of the cards had not been copied.

In order to ensure the preservation of this vital set of documents, and to save the cards from destruction, The Western Front Association not only agreed to take custody of these cards but also but also arranged for these to be stored in a secure location. Importantly, they facilitated the copying of these cards by Ancestry.co.uk who subsequently made these available to subscribers to their site.

These medal index cards can be accessed by WFA members as part of their 'membership package' on the WFA's Library edition of Fold3. All you need to do is log-in to the WFA web site as a member and follow the links to the 'Pension Records'. This is a link to the log-in page. 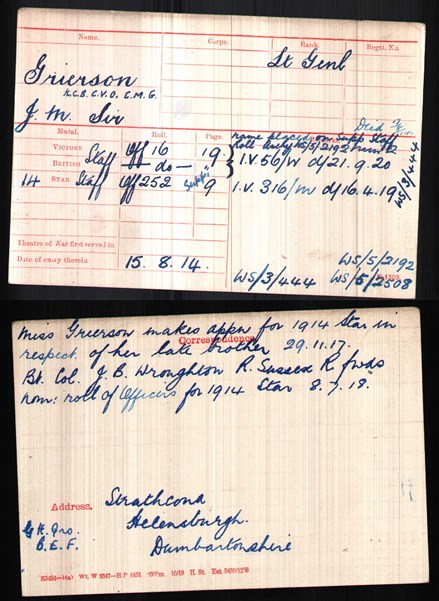 The collection currently contains approximately 4.8 million records, which is nearly all of the total collection. The records can be searched by first and last name and Corps, Unit or Regiment. These cards were created by the Army Medal Office (AMO) of the United Kingdom in Droitwich near the close of World War I.

The Medal Index Cards collection is the most complete listing of individuals who fought in the British Army in WWI, containing approximately 90% of soldiers’ names. The Index Cards were created in order to keep in one place details about a soldier’s medal entitlement.

Who were Awarded Medals?

Certain requirements needed to be met in order to qualify for certain medals (see medal descriptions below). However, nearly all soldiers who served abroad were awarded at least one medal.