Born in 1878, Ewen James Brodie of Lethen was the son of the Lord Lieutenant of Nairn and succeeded to Lethen on the death of his brother in 1908. Educated at Harrow and Trinity College, Cambridge, he entered his regiment from the militia in 1900 and served in the Mediterranean, South Africa and China, and later as Adjutant to the Lovat's Scouts. He married in 1910 and produced two sons and a daughter. 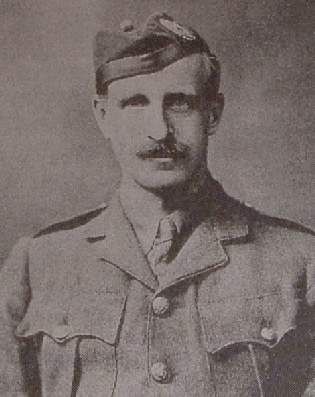 Brodie went to France on 21 August 1914 and fought in the Battles of the Marne and the Aisne. On September 25th in Flanders he took command of the battalion when the headquarters was blown in and he was the only senior officer left. His personal diary from this period survives as do his letters to his wife; the last dated the day before his death.

By now Brodie was acting Adjutant and one of only three officers remaining from thirty who left Edinburgh Castle ten weeks before, when the Camerons were heavily shelled on the morning of 11th November. The Prussian Guards, in great strength, broke into the British lines and Captain Brodie gathered together all the men he could find at the brigade headquarters in Glencourse Wood (now part of Nonnebossen,) where Brigadier General FitzClarence VC (who was killed the next day) ordered him to organise the defence. With the aid of orderlies, grooms, and telephonists, Brodie succeeded in driving the enemy back but fell in the ensuing counterattack. He was buried by men of the Connought Rangers.

Later Sgt Menzies told Mrs Brodie what had happened. Trying to hold on to the edge of the wood Captain Brodie said "For God's sake men, don't retire" and at that moment he was hit in the stomach by a sniper's bullet, fell forward and never stirred. A memorial window to Captain Brodie, gifted by Mrs Brodie, was dedicated in Auldearn Church on April 6th 1916. After the War the grave could not be found but the location was accurately recorded. Mrs Brodie bought the piece of land and in 1923 had a memorial built of Scottish stone, with the inscription:

'TO THE GLORY OF GOD AND IN MEMORY OF EWEN JAMES BRODIE CAPTAIN 1st BATT. QUEEN'S OWN CAMERON HIGHLANDERS WHO WAS KILLED AT THE FIRST BATTLE OF YPRES 11th NOV 1914 BURIED NEAR THIS SPOT." 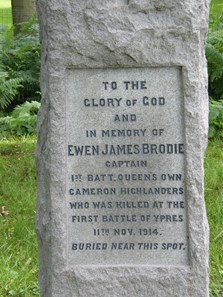 There was a small surround and a garden.

In 1931 Mrs Brodie, by then Mrs Campbell, received a letter from a German officer who had had the grave looked after until he was posted elsewhere in October 1916. He had just visited the battlefield again, came across the memorial and wrote to assure her that it was in the right place.

Meanwhile in 1929, Mrs Brodie's second husband, Col Campbell, had found the memorial in good condition but asked CWGC to look after it. Suitable financial arrangements were made and the memorial has been cared for ever since in close liaison with the Brodie family. The garden was grassed over in 1973 to simplify maintenance, but this peaceful spot in the woods, while safe for the future, is gradually being encroached upon by new housing. 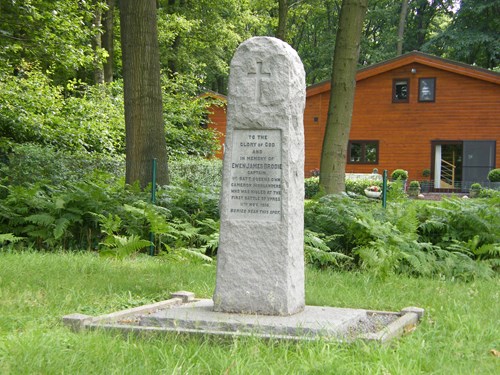