The African American Experience in World War One 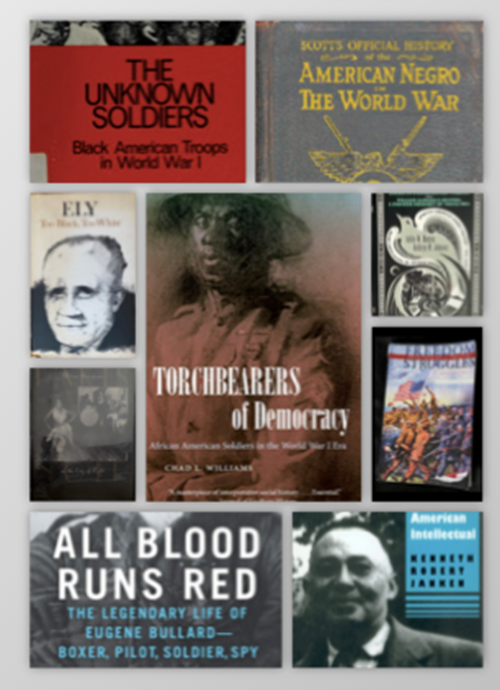 There are several reasons why most Americans are not interested in World War One: they came to it late; their losses were small - nothing like as severe as other combatant countries; there was little negative impact on the home front (indeed the opposite was the case given huge growth in arms manufacturing and boost to the economy); there was nothing like the outpouring of angst in literature, and  when they look closely they are deeply ashamed at what they find: state sponsored racism - as one of the authors we review below argues, "the army tried to erase any memory of African Americans participation in the war effort"  (Janken. 1992 p.38) argues

290,527 African Americans enlisted of whom 'only' 42,000 saw combat attached to or serving in the French Army, the majority, nearly 250,000 were segregated and used primarily for labour, as “stevedores, engineers, cooks, mechanics, and other service troops”. (Green, 1970, p.106). Nonetheless Williams (2013, p.9) from this last perspective, considers the First World War to be “one of the most significant periods in African American history.” It is this involvement of African Americans that we now consider across seven key publications.

On a point of semantics, when it comes to the terms 'black' or 'negro', black intellectuals preferred the term ‘negro’ over 'black', for the likes Rayford W.Logan (1993), it provided a link to his ancestry and the African diaspora - it spoke of heterogeneity. He took the word ‘black’ to be a slur.  In contrast, Ely Green, who received no schooling at all, spent his life objecting to the term ‘Negro’ (and other equally derogatory diminutives) for the very reason that it categorised him as ‘of slaves’ and to be treated as such as someone ‘less’ that any white person.

Reviewed in brief here, and a length elsewhere under WWI Book Reviews, we are going to consider the following:

‘The Unknown Soldiers’ is one of the first academic studies (1974) to lay out in exacting detail the plight and experience of African Americans who volunteered or were conscripted and then served on the Western Front during the First World War. Most were put into labouring details unloading ships, laying roads or pulling up the dead for burial. It is not a pretty story.

The foreword is blunt about the authors revealing ‘the sordid realities of the racist, debasing indignities committed against the black soldier’. There was flagrant discrimination at every stage of the process, from recruitment through training (four days drilling and a haircut), service, recognition and how they were received and treated on their return - what the authors refer to as the ‘hydra-headed racism’.

Adriane Lentz-Smith provides a thorough insight into state sanctioned segregation in the US revealed by the First World War.

It is an uncomfortable truth, that the US, like Britain, France and Germany, had empirical designs of their own through wars initiated in Cuba, Puerto Rico and the Philippines while continuing to suppress their own indigenous populations and fighting punitive border wars with Mexico.

The formation of the regiment in June 1916 reveals much about black history, New York politics and society, and jazz

This is a twenty-first century perspective which reflects the feelings of anger and outrage, shared by most Americans today, toward the long history of racial injustice in America.

It was, according to Harris, a "masterstroke by Colonel William Hayward", who formed and led the regiment throughout the war, was the recruitment of a leading black musician of the day, James Reese Europe. Music and celebrity was the lure that attracted the Hayward's volunteers. The army band they formed brought jazz to France and made them famous.

Rayford W.Logan and the dilemma of the African American Intellectual (1993) Kenneth Robert Janken

When it came to the ‘European War’, though highly educated (he held a Ph.D), a Captain of High School Cadets, a valedictorian and a member of the William College Student Army Training Corps yet he was denied a commission because of his colour - what little of it was apparent, or most likely he declared in his ancestry if it could not be seen on his face.. Instead he enlisted 10 June 1917 in the National Guard as a private.

But Rayford W.Logan was many things: an historian and author, Civil Rights activist, ‘politicker’, campaigner, socialiser and basketball fan. He was an associate of some of the better known black leaders such as W.E.B. Du Bois, and is recognised as the person who minted the phrase ‘the nadir’ to describe the position of African Americans between Reconstruction and the First World War - that period after the honeymoon period for African-Americans that came after the Civil War when there was a significant backlash for African-Americans through legislation, segregation and Jim Crow law. (Janken, 1993 p. 36)

‘Paris Noir’ is a tour de force across much of the 20th century with Paris and the contribution on its culture of African Americans.

It answers the question, 'why did so many African Americans come forward in their hundreds of thousands to fight for a country that treated them so badly?'

The answer lies in the hope of African Americans at the time, that their self-sacrifice was the clearest demonstration of their worth to their country and allegiance to the flag, and that through their actions they might change hearts, behaviours and legislation ‘to win the respect of a nation that had always treated them shabbily’. On contrary, a significant proportion of the white population took fright and rallied to the Klu Klux Klan. There was a glut of lynchings and racially motivated riots immediately after World War One as black men in uniform returned to the US.

Meanwhile, African Americans were made to feel welcome in France and in so doing they got a taste for a sort of utopia where the ‘color line’ no longer existed.

Ely Green was the son of a black servant girl and any one of the three young sons of the white family of German origins where his mother worked. Growing up he floated between the white and black communities.

‘Too Black, Too White’ is an exceptional first hand account of a boy, young man and adult living through the constant unfairness of race discrimination as the black son of a white father in the first half of the twentieth century. Bright, handsome and resourceful, Ely Green has not schooling, so has to learn to read and write as best he can. Keeping a a diary as a young men enables him to compile his unique story, surviving the American south, labouring in a French port during the First World War and much, much more besides.

Ely loathed the terms ‘nigger’ and negro’ being used after having been challenged in a shop when buying ice-cream with some of his white boyhood friends when nine years old. Many years later, waiting in line to be demobbed after 18 months in France he refused to allow the term ‘negro’ to be written onto his demob papers.

Mr Emmett J Scott was Special Assistant to Hon, Newton D.Baker, Secretary of War - so he had to be circumspect.

The book is packed throughout with photographs (by Cpt. E.L. Snyder) set out on repeated pages in the forms of mini-galleries. As well as the text reproduced as originally formatted there are copies of original correspondence penned by or received by, or received by the author..

The author, raised in the north, is at times is mealy-mouthed around the realities of ‘Jim Crow’, segregation, mobbing, gross unfairness and violent lynchings coaching it terms like this, that Negroes (sic) "suffered rebuffs and mistreatment which … tried their patience and caused them to wish to visit violence upon the community". (Scott, 1919 p.81)

According to Emmett J. Scott there were ‘lessons of self-control, cleanliness, promptness, obedience, efficiency, and the value of time’. While the ‘wants’ of African Americans were clear: courts over lynching, Jury Service, the right to vote, the right to hold office, universal suffrage, better education and the end of ‘Jim Crow’ - a big ask in 1919. Otherwise he concluded, ‘What has the American Negro got out of the war? Time alone can bring the full answer to this sweeping question. (p.459)

Addie Hunton and Kathryn Johnson served as ‘secretaries’ in YMCAs in France during the First World War. A Black suffragette, Addie Hunton had already spent time in France with her family studying in France and Germany before the war. She wasn’t the first black woman to make it to france, previous African American women hoping to serve behind the lines had been returned home as ‘persona non grata’. This initial resistance to accept African Americans in any role, was eventually overcome.

Any one of these books will open your eyes to what the First World War meant to black Americans, whether wealthy and educated (Rayford W.Logan), dirt poor and resourceful (Ely Green), male or female (Hutton and Johnson), whether they fought or laboured in France. The tough reality is that African Americans were already at war, with their own country, long before they stepped onto foreign  soil. Perhaps it is the case, that while white Americans looks with blinkered eyes on nothing more than the exploits of Alvin York in the Ardenne, African Americans consider the sweep of black history from the Civil War through reconstruction, Jim Crow, two world wars and the civil rights movement where World War One was such a catalyst for change - a tipping point worthy of close study.