The Arras and Loos Trenches at Blackpool

One of the lesser-known legacies of the First World War is the impact it had on charity – it is estimated that the number of charitable concerns in Britain doubled during the conflict, resulting in stiff competition for funds and a need for greater professionalism across the sector. Many new and enduring ideas were born (including the concept of ‘the charity shop’), but the efforts of the King's Lancashire Military Convalescent Hospital remained rather unusual.

The story of the hospital’s fundraising drive came to light courtesy of members of The Western Front Association who responded in their numbers to a postcard from 1917 that was reproduced in the Bulletin in June 2000. It showed a posed group of ‘official guides’ at the ‘Arras Trenches’ in Blackpool. 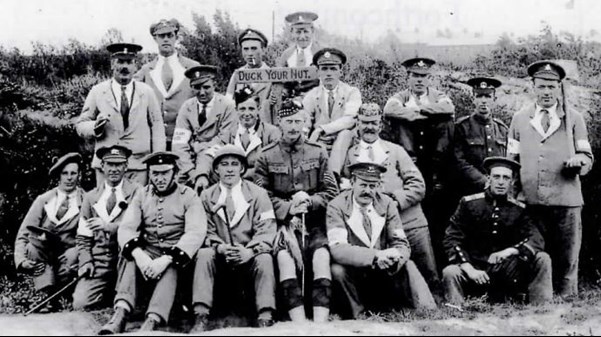 Above: The picture of the ‘official guides’ that sparked the interest of many Western Front Association researchers.

It is thought the trenches had been constructed as a training system in the winter of 1915-1916 by soldiers from nearby Weeton Camp, and under the guidance of a Captain Whitsun of the Royal Engineers. Modelled on a trench system from the Battle of Loos (and originally known as ‘the Loos Trenches’), they were opened on June 10,1916, on Blackpool’s South Shore

It was stated at the time that the trenches would provide summer visitors to this popular holiday destination with a chance to 'gain some idea of the conditions under which soldiers were fighting in France and Flanders'.

The Mayor would claim at the official opening that the public “would see things that they never expected to see”, adding that “officers in very high positions had told him and others that the trenches at South Shore were the best trenches in the country”. 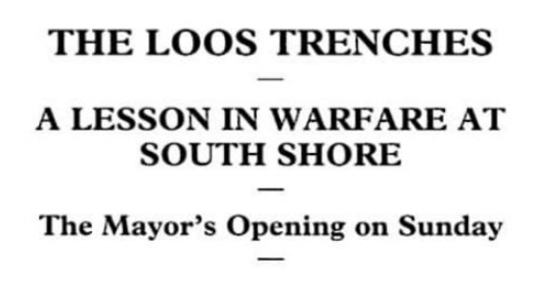 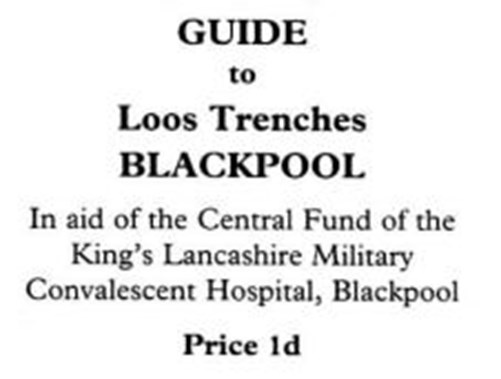 Above: Contemporary newspaper headlines and adverts for the trench system.

Entry was 1d, with half-price admission for members of His Majesty's Forces in uniform – with all proceeds going towards the upkeep of the nearby convalescent hospital, which had been set up in 1914 on the Clifton Park Racecourse at Squire’s Gate.

In a rather bizarre twist, wounded soldiers from the hospital (all wearing their hospital blues) were called upon to play a central role in the process.

A contemporary newspaper report explained: 'A further pleasing factor in connection with the preliminary arrangements was that, with characteristic kindness, Lt Col Barron, the officer commanding the King's Lancashire Military Convalescent Hospital, undertook not only to take charge of the ground, but also to maintain the trenches in order, to provide free of cost all guards, working parties, and guides.'

The report continued: 'It would be well to reiterate at this stage that the system is modelled on the actual trenches in the Loos district in Flanders, and the visitors' interest will undoubtedly be considerably enhanced when it is recalled that many of those near and dear to them, relatives and friends, have fought in the identical trenches from which these have been so faithfully copied.' 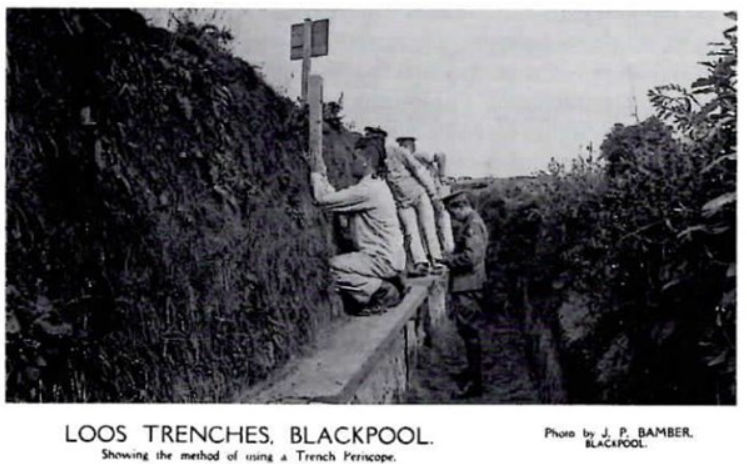 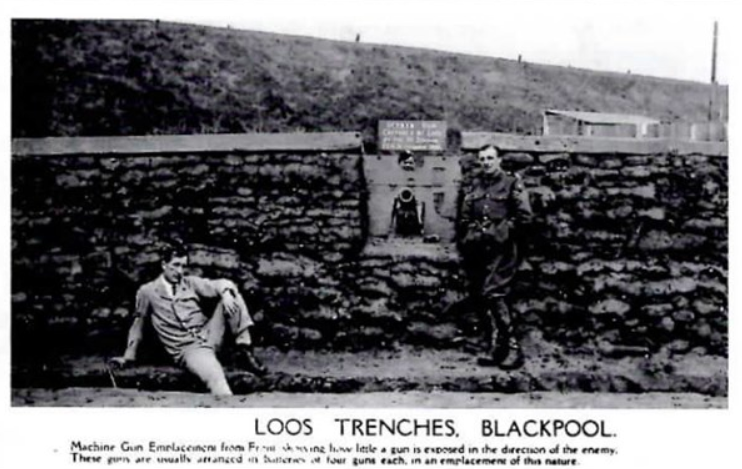 Above: Wounded soldiers seen acting out scenarios in the make-shift trench system for curious members of the public.

Among other things, the circular trench system included a redoubt, machine gun placements, battalion HQ dug-out (described in the newspaper report as 'a cosy little spot from where all the orders are issued'), and a 'labyrinth' of trenches named things like ‘Oxford Circus’ and ‘Piccadilly Circus’.

At the launch of the ‘attraction’, visitors were also treated to a “thrilling” contemporary account of the Battle of Loos presented as an extract from the letter of an unnamed artillery officer who had apparently been present. Even in the abridged offering below, the propaganda message is clear…

“Along our section, say five miles, there must have been 3,000 shells fired in five minutes. I wish I could give you some idea of the awful majesty of those few moments when, as an avenging Angel with a flaming sword, the forces of the Allies gave to the Hun the first lash of the scourge prepared for him. We had guns everywhere, and all were firing their hardest at carefully registered points of the German trenches, a distance varying from 100 to 500 yards. On every yard of trench at least four shells must have fallen within five minutes, and each shell would have a radius of destruction of at least twenty yards.

“Yes, I wish I could give in words some impression of that gunfire. But all I can say is that it was a hundred times greater than any I had experienced before; and you know I have seen some bombardments. You would think that some metaphor of terror and sublimity would have suggested itself. It did not. Instead, I had the fantastic image in my mind of all the peace-mongers of England assembled in a great temple of Calico, and this temple being split into a million ribbons with a horrid, screeching and thundering, while the poor devils writhed prone on the ground, faces upturned to the clamour, their necks all awry.” 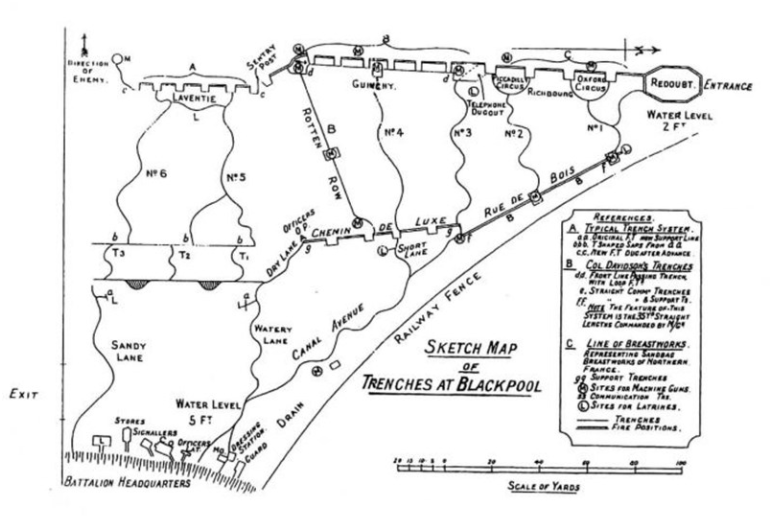 Above: A postcard from 1917 when the trenches had been rebranded, and a map showing where the site was to be found.

The fundraising venture at South Shore would prove surprisingly successful, with receipts of £2,437 reported for 1916. As a result, the trenches were brought up to date and re-branded as ‘the Arras Trenches’ in April-May 1917 – presumably to provide a link to the Battle of Arras, which had only recently begun. It is not stated when they were finally closed. 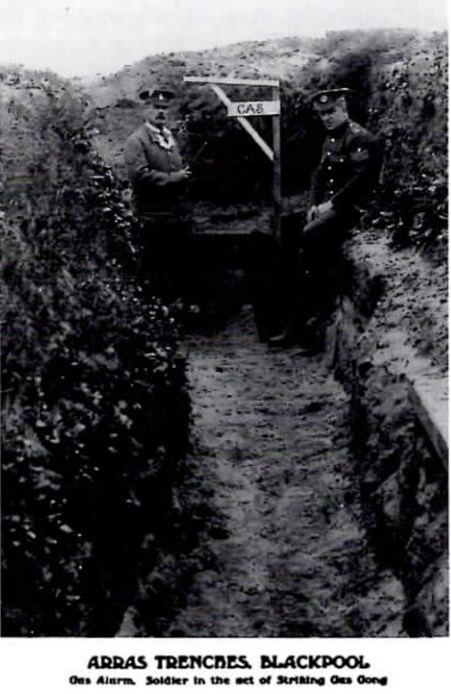 For the completists, the area of land used for the trenches, which was off the Lytham Road and near to the railway bridge, is now built up, whilst the site of the King's Lancashire Military Convalescent Hospital forms part of Squire's Gate Airport.