Dr Martin Purdy (Lancs and Cheshire WFA branch) recently managed a Heritage Lottery funded project at the Westfield War Memorial Village Lancaster as part of the 'Then and Now' funding stream available for WWI related undertakings. It culminated in this short documentary.

‘The Women of Westfield - picking up the pieces after the First World War’ looks at the vital and demanding role that the wives of disabled veterans, female fundraisers, war sculptresses etc played on the Westfield War Memorial Village in Lancaster after the First World War. The Westfield village was funded by philanthropists and public charity to support married local men who had returned with life-changing injuries. While the sacrifices of such men is generally recognised, the sacrifices of their wives and those who played a key role in supporting them has all too often been overlooked. This project sought to address that fact.

The team of volunteers undertaking the project ranged in age from 17 to 92. Many were residents or former residents of the Westfield settlement, which continues to care for ex-service personnel and their families to the present day.

‘The Women of Westfield’ tells story of forgotten female heroes of the First World War.

Think of heroes of the Great War and most of us picture soldiers in trenches, but a project in Lancashire has been looking at the heroism of a group of oft-forgotten females. The researchers looked at the vital and demanding role that the wives of disabled veterans and female fundraisers played after the war had ended.

The Westfield Village, which is situated on the outskirts of Lancaster city centre, was funded by acts of philanthropy and charity to support married local men who had returned from the battlefields with life-changing injuries. More than 1.7 million British and Empire servicemen came back from the conflict with some form of disability, and Lancaster (which was then home to the regiment of the King’s Own) had its fair share.

The Lancaster settlement was meant to be part of a larger movement of bespoke communities for injured veterans proposed by leading British reformers, businessmen and philanthropists, including the likes of the Rowntrees, Gordon Selfridge etc.

However, because of government reluctance to help fund such a large-scale undertaking, the ambitious nationwide scheme ultimately collapsed.

A number of disabled communities would be built by wealthy individuals, and more latterly Haig Homes, but Westfield became the only physical representation of the original nationwide network that had first been proposed by the internationally renowned landscape architect and town planner Thomas H. Mawson. Mawson had come up with the idea in tribute to his youngest son James, who had been killed during the Second Battle of Ypres in 1915 while serving with the 5th Battalion of the King’s Own.

Veterans and their families often faced stringent tests before gaining tenancy on the disabled villages, but would then enjoy peppercorn rents and first-class housing, facilities and environments that might otherwise have been beyond their economic reach.

The Westfield village itself was designed by Thomas H. Mawson, who was also responsible for the redesign of much of Thesalonika after the war as well as the gardens at The Peace Palace at The Hague. However, while Mawson and the Lancashire philanthropist Herbert Lushington Storey are most commonly referenced in relation to Westfield, it was women who played a key role in raising the funding to help make their vision a reality.

The stories of these women are not well known, from the fundraising and committee work they undertook, to the challenges that the wives of the disabled veterans faced. The new Westfield documentary tells many of these stories – including the remarkable tale of Mrs Hilda Leyel, whose work for disabled veterans of the war changed the face of fundraising in Britain forever but also culminated in an attempt to prosecute her under the Gaming and Betting Act. 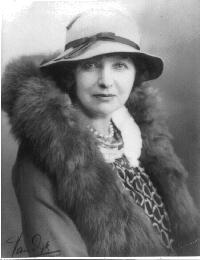 Mrs Hilda Leyel, whose work for disabled veterans would change the face of fundraising in Britain forever.

“Many of the wives of the disabled men faced real hardship - their husbands had returned home from war both physically and mentally damaged, and they often found themselves acting as chief breadwinners, full-time carers for their husbands, as well as having the lead role in parenting.” He explained.

“In addition to the wives of the veterans, there were many other women who played a vital role as fundraisers. Hilda Leyel, for example, would change the face of fundraising in this country for ever, but would be prosecuted in Britain and honoured by the French.”

Westfield continues to serve as a bespoke community for ex-servicemen and women, and the community will celebrate its centenary this year.

Anybody with any memories or photographs of the village, or who wants to know more, can email Martin (martinpurdy@talktalk.net) or visit the website at www.westfieldmemorialvillage.co.uk. Martin has also added a talk about the broader subject to the WFA speakers’ list.