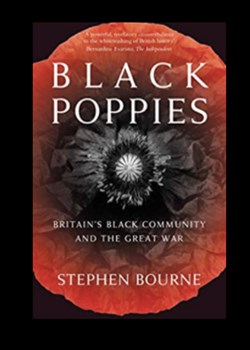 If you are interested in discovering the many stories of black servicemen and black women during the First World War then begin with Black Poppies - any further reference you may need, whether the next book or an article from the newspaper records will be found here.

Along the way you’ll be pointed towards the Channel documentary 4 ‘Mutiny’’ and the Steve Humphries BBC documentary ‘Forbidden Britain: Our Secret Past 1900-1960’ and the BBC Radio 2 2016 series presented by Sir Trevor McDonald ‘High and Mighty Men of Valour’ and if you’re lucky you’ll hear the author Stephen Bourne at a national or branch event of The Western Front Association and elsewhere.

Bourne’s approach is not to seek out acts of racism, though he recounts these, rather, ‘to acknowledge that not all white people were racists, and not all black people were victims’ - that we should ‘look for the positive stories’ (p.19) which is what we have in Black Poppies - examples of people who were role models to their families and those around them 100 or more years ago, and can be still today.

At least now we recognise and celebrate that black history in Britain is our history and permeates British society and culture. Stephen Bourne is right to state that ‘the near-total exclusion from our history books of black servicemen in the First World War is shameful’ (p.15)

We get the context, from black people in Britain at the time of the outbreak of war, those who came to Britain to try to enlist, or were enrolled outside the country and came to Britain, such as West Indians from Jamaica, Bermuda and Barbados in particular.

The very fact that Black Poppies is into its second edition is testament to its success and the number of additional stories that have come forward - remarkable stories of fighting colonial rule and racism, such as Frederick Njilinia of Nyasaland (now Malawi) the father of the late jazz singer Dame Cleo (Clementine) Laine (p.38).

The history of the British West Indian Regiment (BWIR) requires several chapters we get its story from inception 26 October 1915. By war’s end, we are told, the BWIR had registered 15,204 men (and had rejected 13,940 as unsuitable). 10,280 of these came from Jamaica. They were not unlike the mixed lot volunteering in Britain: labourers, cultivators, carpenters, bakers as well as police constables and teachers (pages 40-42). Sixteen of these men were decorated for bravery, 185 were killed or died of their wounds, 697 were wounded and 1,071 died of illness.

As well as the army, Bourne looks at black men in the navy and the airforce, as well as the plight of women and children in communities on the ‘home front’.

We end with the shocking events of 1919 when riots broke out in Cardiff, London and Liverpool - leading to the murder of the Jamaican soldiers Charles Wolten 5 June 1919.

The Persona Dramatis include: Lieut. David Clemetson, the black officer who could have passed for white but refused to lie about his race; Sgt George A. Roberts, the football star and officer Walter Tull; the Guyanese neurologist Prof.J.S.Risien Russell; Lionel Turpin ‘a lad in a soldier’s coat’; Scotland’s Black Tommy and the remarkable David Clemetson, born in 1893 to a plantation owner, educated at Haig’s alma mater Clifton College followed by Trinity College, Oxford killed 21 September 1918 as well as Herbert Morris, the 17 year old shot for desertion who had volunteered when he was still only 16.

Jamaican Volunteers in the First World War by Richard Smith (2004)

Staying Power: The History of Black People in Britain (1984)

As Good As Any Man: Scotland's Black Tommy (2014) by Ray Laycock

Remembered in Memoriam: An Anthology of African and Caribbean Experiences in WWI and WWII (2007) ed Nairobi Thompson and Jak Beula

The Nubian Jak Community Trust Plaque in Seaford Station which was unveiled 12 March 2018.