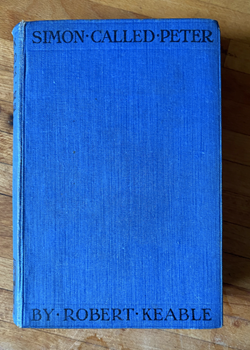 In ‘Flower of Battle’ (reviewed elsewhere) literary historian Hugh Cecil expounds on the qualities of twelve largely forgotten novelists who wrote fictional accounts, albeit closely following their own First World War experiences; these were published in the 1920s and 1930s. Some sold hugely, others did not, in two cases the authors died young, one in a freak fatal accident, another from disease. Revisiting each, and comparing the reviews written by Cecil in the 1990s, it is possible to question whether all or any are worth reading 100 years on. Most offer a personal insight into fighting and rest on the western front, the perspective is largely that of the officer; most are on the ground, one is notably in the air, most are combatants, one is not - which brings me to ‘Simon Called Peter’.

This reviewer struggled with Robert Keable through every page finding it woefully dated with all its ‘topping this; and ‘old darling’ that, and shamefully for its time words such as ‘n******’ and ‘kaffir’ are used to describe black men and women from the Caribbean and South Africa.

The protagonist has a tiresome self-obsession with the nature of his religious beliefs and the anxiety of a virginal teenager over a young woman on whom he has a crush. A girl is an ‘acquisition’. His interest in the opposite sex and whether his love for Jesus will get in the way and the consequences that a ‘fatal kiss’ might have and where that might  lead is tiresome, towards the end the protagonist concludes that ‘all pleasures are an exchange of some kind and only God offers it all’.  This jars in a century where society is largely secular. A chorister for five years to the age of 13, I was exposed to plenty of religion and found it and many of its community somewhat lacking.

The protagonist is anxious over girls who enjoy kissing and saucy conversation. Heaven forbid that a woman should get the reputation of being ‘fast’, and so ‘morally inferior’ and with ‘losing all worldly  prospects’. Yet he, like most officers around him, appear to sleep with prostitutes and local girls with impunity.

‘Simon Called Peter’ has not stood the test of time, even Cecil concedes that it is dated. I found it stilted, mundane and repetitive. To paraphrase Alfred Hitchcock, who said that ‘drama is life with all the boring bits left out’, ‘Simon Called Peter’ was largely a boring life with most of the drama left out.

You quickly conclude that priests were not wanted, ‘soldiers were either in agony near death, or out of it and needing no message of consolation from Jesus’. So as not to be redundant they appear to have done little more than be a good bedside listener and the provider of cigarettes. The padre in ‘Simon Called Peter’ appears to live for the mess and leave - no time is spent on the front, no one wants religion, whether as Church Parade or on their deathbed. A friend dies when the train they are on is hit by a bomb during a rare German daylight bombing raid.

Sadly therefore, and perhaps reflected in the price of £2.33, ‘Simon Called Peter’, despite its success at the time, is not worth the trouble today. If you want a story of an officer chasing after a young nurse and sleeping with her - out of marriage, then you are better off with Ernest Hemingway.

That said, the story of Robert Keable himself is fascinating and tragic. Married young to a Roman Catholic woman before the war he fell in love with an well-heeled young Amazon driving lorries on the Western Front - they had an affair and after the war they moved to Tahiti. Tragically she died in childbirth and he died age 40 of kidney failure. He wrote many more successful novels.

If you are interested in social history of the 20th century you might turn to ‘Simon Called Peter’ to gain a sense of the sensibilities of the time: religion in all its varieties mattered (Protestantism and the Church of England - like Britain’s Empire, was superior to Roman Catholicism and Presbyterianism, while women were trivialised - their lives made secondary to men, men having prospects, women being ‘sensible’.

The protagonist notices the transition from ‘train to motor’, the lowering of social standards, such as not dressing for dinner, women not wearing corsets and wearing ever shorter skirts and women going out with men at night without a chaperone - and that great dilemma of the early part of the 20th century.

Others may have quite a different view of Keable and ‘Simon Called Peter’, but for me, though I have the sequel 'Recompense’ (a hardback for £1.53). I’ve already decided after a few pages to give it a miss. Both books will be sold or taken to a charity shop. With one of Hugh Cecil’s authors to read each month for the next year or so, I am moving on to the next one.