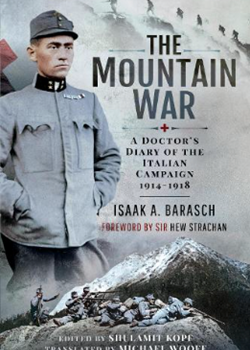 By Dr Isaak A Barash

There are so few Austrian or Italian memoirs from the Italian Front translated into English that it’s refreshing to find this offering from Pen & Sword detailing the life of an Austro–Hungarian military doctor. I do feel, however, that the subtitle (A Doctor’s Diary of the Italian Campaign 1914 – 1918) is somewhat misleading, as war on the Italian Front didn’t start until May 1915, and Barasch’s diary begins with an entry for 22 January 1916.

Nevertheless, the diary offers us some fascinating glimpses into the last days of the Austro–Hungarian empire and an army riven with snobbery, class divisions and ethnic/religious/nationalistic tensions. The son of a Jewish tenant farmer from the furthest corner of the empire (eastern Galicia, in what is now Ukraine) Barasch would have had lowly status by Austro–Hungarian standards. Without his medical degree he would have ended up as a front line infantryman, but somehow Barasch made it to medical school in Vienna, and then as a medic to a Landsturm regiment when he was called up.

Barasch’s diary recounts his daily experiences as a doctor for the 106th Landsturm Division on the Isonzo, in the mountains of the Tyrol and finally on the Piave. Although technically a division of reservists, the 106th saw almost continuous action, both in Italy and on the Eastern Front, as well as a brief spell on the Western Front in late 1918.

Barasch doesn’t devote much space in his diaries to the actions his Division were engaged in, focussing more on the medical and administrative aspects of his experiences. And they were not happy experiences – he spends most of the diary writing about how tough and miserable his life was, complaining about the places he was posted, the local womenfolk, his lazy commanders and his uncomfortable bed.

To be honest, it’s hard to feel much sympathy for Barasch, especially if you’ve read some of the other memoirs from this front: Hans Pölzer describes in stomach–churning detail how he burrowed his way into a rotting corpse to escape Italian machine gun fire, Joseph Gál describes how his life–long friend died in his arms and Franz Arneitz describes how he spent 50 consecutive days on a mountain ledge under fire from Alpini above. Barasch’s slightly leaky hut several miles behind the front line, and the occasional missed meal, seem rather insignificant by comparison.

Barasch does give us an insight into the workings of the army medical corps, the sort of injuries they had to deal with and the problems associated with evacuating wounded men from mountaintop positions. He also shines a light on how Austria–Hungary was experiencing severe shortages as early as 1916, and he seems to spend more time hunting down medical supplies and building materials than tending to the wounded. That’s when he’s not off to Regimental HQ for a bath or writing to his CO requesting a transfer away from the front....

The diary also gives us an interesting glimpse into the religious tensions of the time. Barasch devotes quite a lot of space to his loathing of the Pope and the Catholic church, and he considered the Italians to be as treacherous and untrustworthy as their pontiff.

Although Barasch comes across as a snob and a moaner, that doesn’t take away from the interesting details of his life as an army medic. The sections by Sir Hew Strachan, who writes about the military situation on the Italian Front in a concise, intelligent way, help contextualise the diary and give the reader a good understanding of the war in Italy.