When Project Alias was first announced in early February, it was originally thought that it may be possible to get together a team of 50 volunteers and that the research into the work would take a few months.

Without doubt the Coronavirus lockdown has resulted in many WFA members looking for 'diversions' but the response from WFA members to the project has been staggering.

Well over 150 volunteers have come forward so far, and the amount of research being undertaken into the men who served using a pseudonym has moved at an incredibly fast rate of knots. So much so that less than two months after distributing the first pieces of research to the first volunteers we have completed the research stage of phase 1 of the project and have completed over 90% of the research into phase 2 of the project.

The volunteers have been split into eight teams, all superbly led by (volunteer) 'team coordinators' who  are putting hours of work into keeping the teams informed of progress and ensuring the 150 volunteers are supplied with pieces of work in a methodical and controlled manner.

In addition, a further project was created to run alongside the 'alias' work. This was called 'Project Capture'. This has only three members working on it, but it is making incredible progress and will - when complete - improve the 'find-ability' of cards that have been mistagged.

To explain:  the quality of the tagging and indexing on these 'Soldiers Died' cards is very high and it is without any doubt that our partners Ancestry have done an excellent job, but inevitably some errors have crept in;  more often than not this is due to the difficulty of reading the names of the soldiers which are handwritten on the cards. However, because the cards are 'batched' into 1046 'drawers' and these are in alphabetical sequence any 'mis-tagged' cards get 'thrown out' of the sequence and end up at either the front or the back of each of the 1046 'drawers'. 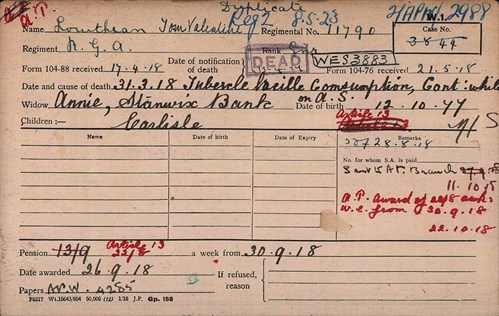 Above - the card (and a close up of the card) for 11790 Tom Lowthain. The original 'tag' on the card was Lowthean which is forgivable due to the poor handwriting. This card is now correctly 'tagged' as Lowthian (with an "i") and is therefore far easier to locate on the WFA's Pension Records

What the volunteers on Project Capture are doing is examining these 'out of sequence' cards and adding corrections the errors that have occurred with the original indexing. The work is not high profile and will go un-noticed by most users of the WFA's Pension Record Cards, but will ensure the accuracy of the tagged soldiers names on the 'soldiers died' cards improves from the 'excellent' we already have to 'as near perfect as is possible'.

Returning to Project Alias. It is now the case that  rather than this project stretching into the summer and possibly autumn as originally envisaged, the first part of the project will soon be wrapped up. (This does not mean the project is completed - far from it - there remains many aspects still to work on which will be taken forward in coming weeks).

As at the time of writing (Monday, 20 April) over 8,000 aliases have been located within the WFA's pension record cards (although many of these may prove to be 'pairs' of aliases - 'Jones alias Smith' often having a card under Jones as well as Smith). 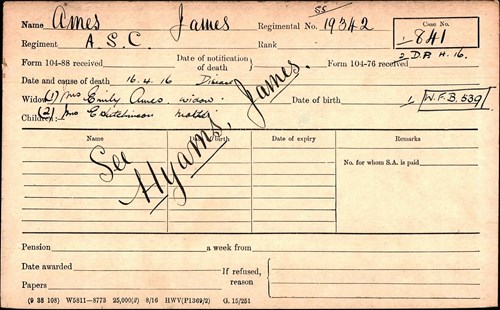 Above and below - the two cards which cross-reference Hyams (alias Ames) 19342 of the (R)ASC. The fact there is an alias here is not recorded by the CWGC. 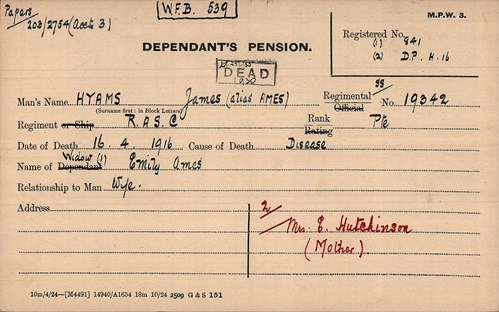 It is likely that by the time the last of the research is completed, we will have approximately 10,000 lines of data which will need to be manipulated and worked on.

I'm sure WFA members will be fascinated to be able to review the results of this research - which is something that will certainly be made available.

One factor that has become increasingly obvious is the much higher incidence of the use of aliases by soldiers from Ireland than elsewhere. We believe this is one area that may well benefit from academic study.

It is also appropriate to mention the sterling work being undertaken by another WFA member who has - on her own - been resolutely inputting corrections that members notice when browsing the cards. The 'corrections process' is fully detailed on the WFA web site here > Correction of Errors

As the volunteers on Project Alias and Project Capture and the 'corrections process' continue their brilliant work - and every one of these is a real 'hero' - attention needs to turn to 'what next'.

It is far from clear how long the present lockdown will continue, but there is every chance there will be some form of restriction for weeks to come, therefore at least one more research project is being piloted which - like Project Alias - will aim to keep WFA members engaged and also make a significant contribution to future research for historians and family researchers alike. This is 'Project Hometown' and details of this are available on the WFA web site via this link Project Hometown

If WFA members would like to register an interest in joining the band of volunteers,  please do email me. Details are below.