The divisional history (written by Cyril Falls) has the following account:

On October the 2nd, the day after its relief of the 108th Brigade, the 109th experienced the strength of the enemy's artillery and his determination. At 5 p.m. a heavy barrage of artillery of all calibres fell upon the front line, upon Dadizeele, and all approaches. Half an hour later the German infantry advanced to the attack. The force of the barrage had caused a withdrawal from some forward positions. These the enemy penetrated, but was quickly driven out with the bayonet. By night the line was completely restored. 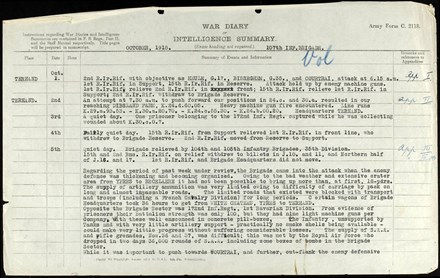 Above: the brigade war diary which says for 2 October "An attempt at 7.30 am to push forward our positions in [map reference] resulted in our reaching Dibsland Farm. Heavy machine gun fire encountered. This, however, does not do justice to the trauma the battalion was to suffer. The battalion's war diary provides more detail:

2nd October: A minor operation was carried out by the battalion (supported by the 15th Bn). The operation succeeded on the left flank and failed on the right owing to intense machine gun fire. The following places were attacked: Dibsland and Somerby Farm attacked by 'B' Company with 'C' Company in support (left flank) and Claraborough House attacked by 'D' Company supported by 'A' Company (right flank).

The left flank withdrew to old position owing to right flank not having reached objective.

The fatalities from this day were mainly buried Dadizeele New British Cemetery (thirteen burials in the cemetery are for men of the battalion plus the officer John Haigh) but others were buried elsewhere (Ypres Reservoir Cemetery having six burials of this battalion from 2 October). A further thirteen men have no known grave and are commemorated on the Tyne Cot Memorial to the Missing. 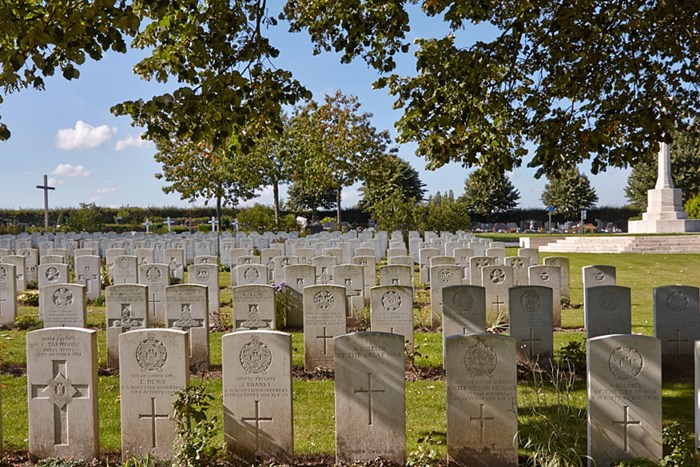 But looking at the list of soldiers who were killed on this day, we find there is an anomaly. This was brought to light during by WFA member Chris Ludlam, who is one of those undertaking work on Project Alias. (Project Alias is a piece of work being undertaken by over 100 WFA members to look at the cases of men who served using a pseudonym.)

One of the men commemorated at Tyne Cot was Rifleman John McDonald (number 20318). However what has been spotted, by using the WFA's Pension Records is that this was an alias. 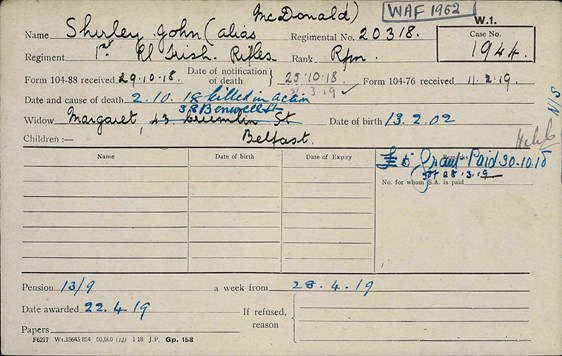 The interesting matter here is that the same soldier (number 20318 - John Shirley) is one of those buried at Dadizeele New British Cemetery.

Below is John's listing on the Tyne Cot Memorial register (page 785). He is 5th from the bottom of the second column. 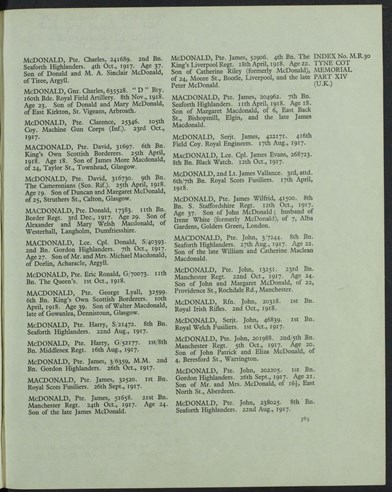 And below is the panel listing from the memorial. Again he is detailed on the bottom right of this panel. 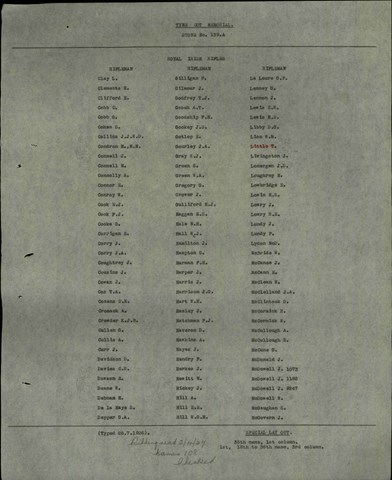 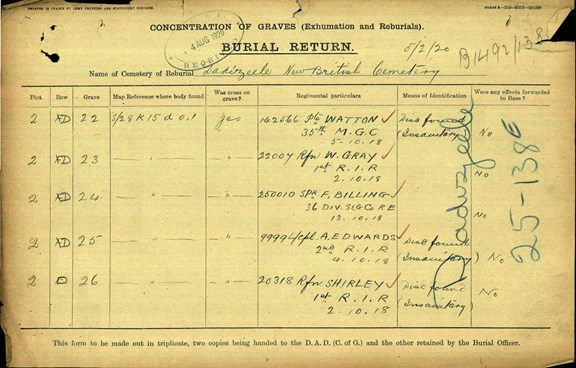 Curiously, on another document is a reference to a 'Regimental Memorial Cross' for soldiers from the battalion 'killed on 1, 2, 3, 4 October'. 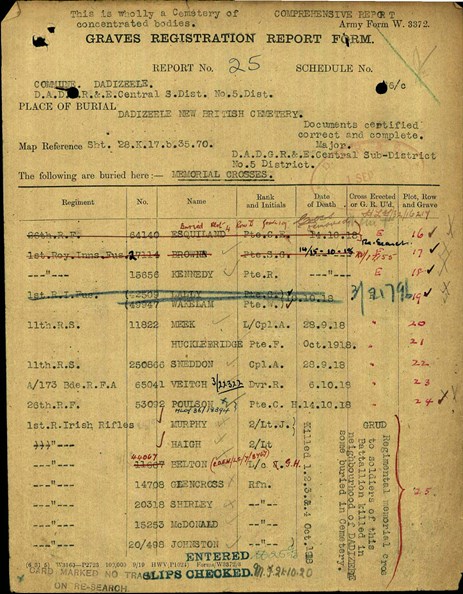 The fact that John has been named on the Tyne Cot Memorial and is also buried at Dadizeele has been referred to the Commonwealth War Graves Commission, and is likely that within a few days the digital listing on the CWGC website for his name at Tyne Cot will be removed.

Next time you are at Tyne Cot, please make a beeline for the Royal Irish Rifles panel and take a look at John MacDonald, the man who is buried elsewhere.