A Lonely Island War Memorial: Stroma in the Pentland Firth 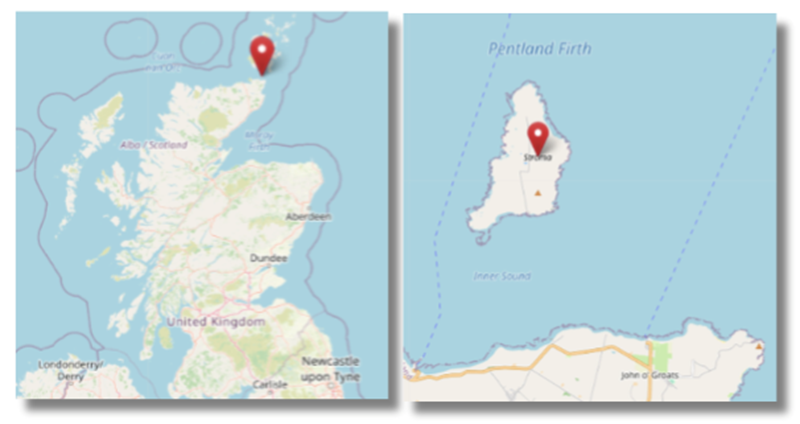 Two miles north-west of John O’Groats lies the island of Stroma. The name translates from Old Norse as ‘the island in the stream’, the stream being the Pentland Firth.

Above: The island of Stroma is the most southerly of the islands in the Pentland Firth.

Uninhabited since the early 1960s, ruined cottages can be seen across the island. Only the lighthouse in the north of the island was manned until its automation in 1996. 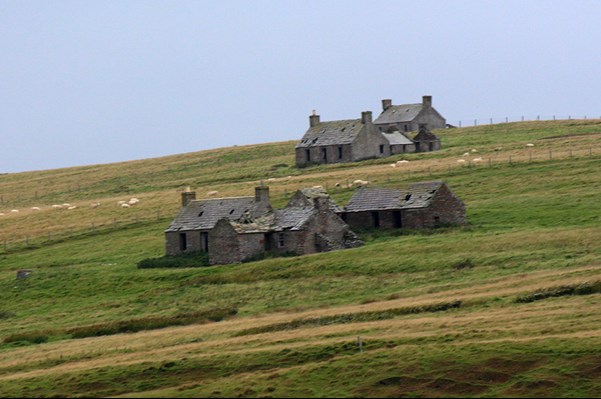 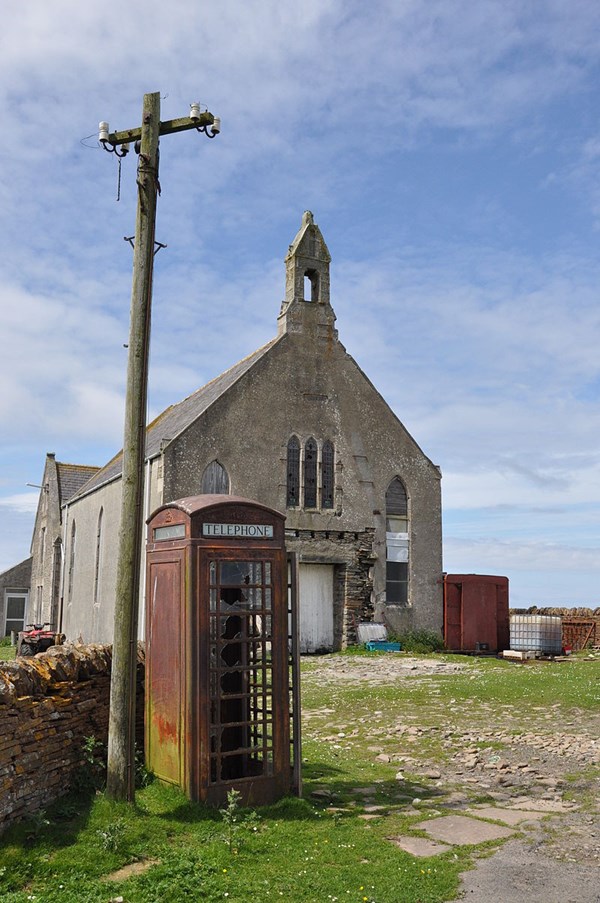 Above: Abandoned houses on the island and the church building.

In 1918, the islanders raised funds of £1,489 for the war effort – representing just over £5 for every person on Stroma. With the end of hostilities in November 1918, it was decided to use the remainder of the money to build a memorial hall – unfortunately this was destroyed in a gale just prior to its completion. The wood was sold off and the proceeds of the sale were lodged in a bank account. It was not until after WW2 that it was decided to instal a memorial plaque in the Church of Scotland on the island to the dead of both wars – this was dedicated in 1948. After the island was abandoned, in the 1970s the owner wished to use the Church building as a store. It was then decided to erect the memorial as seen below. A team of volunteers completed the work and the memorial was dedicated on 19 July 1975, with around 150 people who had travelled from the mainland in attendance.The memorial sits on the highest point of the island, commemorating six men who lost their lives in the First World War and six from the Second World War. 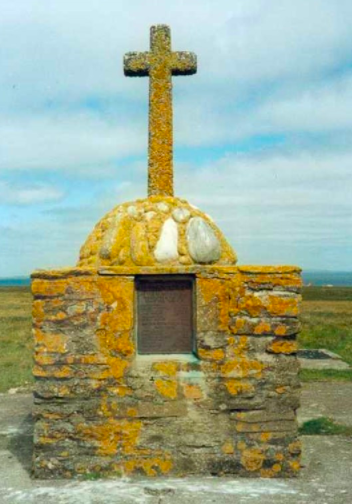 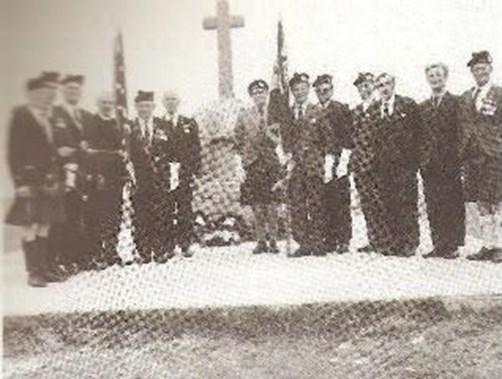 Above: The dedication of the Memorial in 1975. Photo – Scottish Military Research Group

Of the six men named on the war memorial from WW1, four are Seaforth Highlanders and two are Royal Naval Reservists. Sadly, it has not been possible to source any photographs of these men and minimal records remain.

In 1911, Alexander Campbell was working on Stroma as a labourer on pier works and boarding in Burmah House, the home of Donald and Ann Simpson. Born in Wick in 1891 to Christine Campbell, he had boarded with the Simpsons for some years.

Alexander served as a Private in the 6/Seaforth Highlanders. This battalion was heavily involved in action in the Battle of Arras commencing on 9 April 1917 – Alexander was wounded at this time and died on 11 April 1917. He is buried in Aubigny Communal Cemetery Extension. 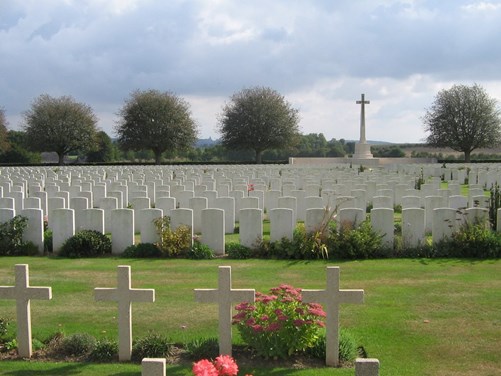 Alexander’s pension card indicates that a brother, David Campbell, also died in the war. David served as a Lance corporal in the 5th Seaforth Highlanders and was killed in action on 21 March 1918. It is likely that David never lived on Stroma (unlike Alexander) and is therefore not included on the Stroma War Memorial. 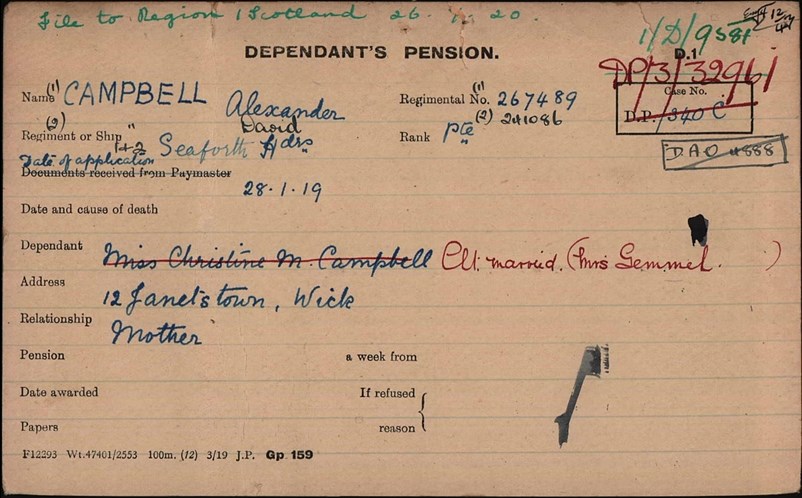 Above: The pension card for Alexander Campbell

The Pension card for James Falconer, the second named man on the Stroma War Memorial also indicates that a brother, William Robertson, was killed. He was serving in 2/Seaforth Highlanders when he was killed in action on 28 March 1918. 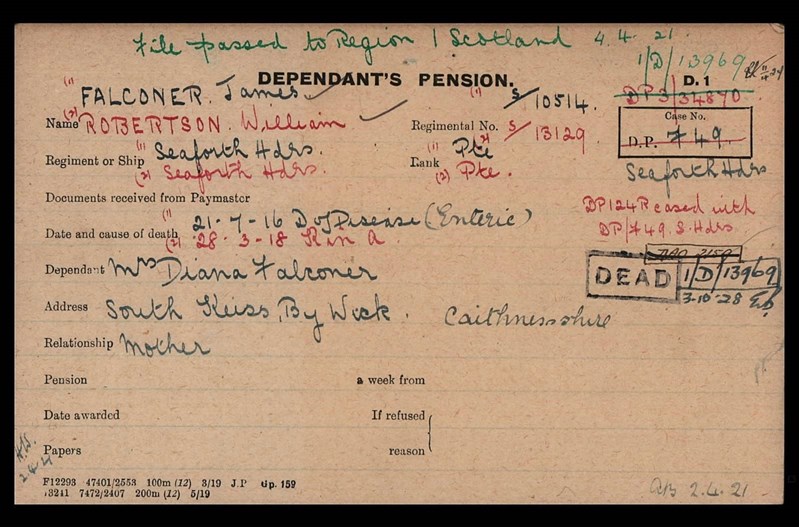 Above: The pension card for James Falconer.

In this case, it is unclear why William is not included on the Stroma War Memorial.William was born on Stroma in 1888 and his mother is named as Diana Robertson on the birth register entry. She later married John Falconer. William did not appear to live in the Falconer household at Schoolery on Stroma in 1901 but lived with his uncle elsewhere on the island. By 1911, Diana was widowed and living in Keiss on the mainland with her son James.

James served as a Private in 1/Seaforth Highlanders. By 1916 he was in Mesopotamia where he died of enteric fever on 21 July 1916. He is buried in Basra War Cemetery. 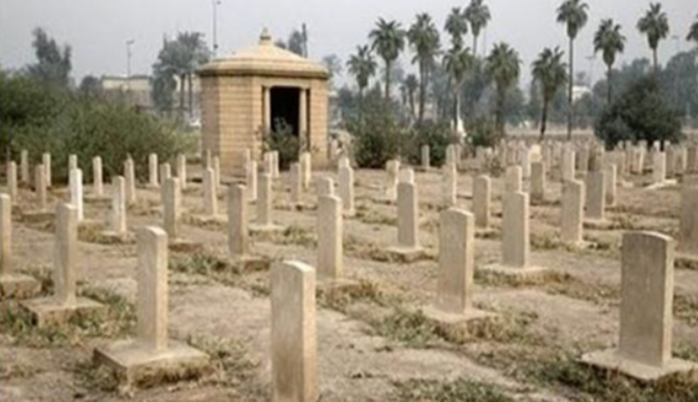 James Falconer was not the only young man from Stroma to die in Mesopotamia. Private John Sinclair, also serving in 1/Seaforth died of typhoid on 28 January 1917 and is buried in Amara Cemetery. John was born on Stroma in June 1892. 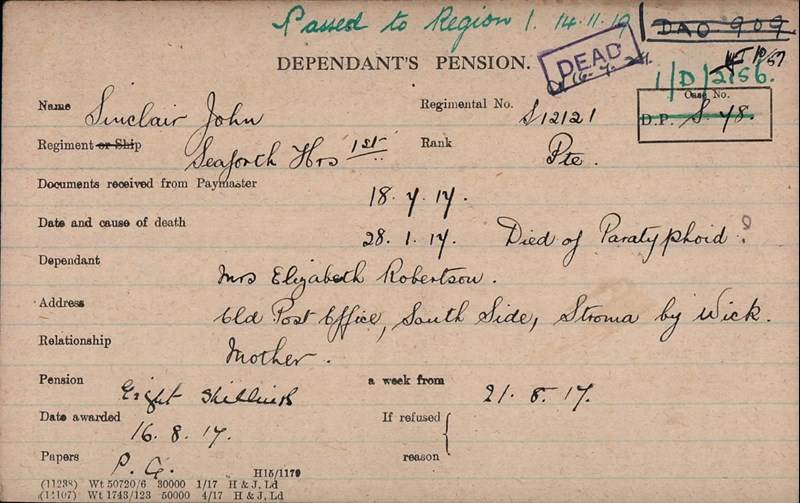 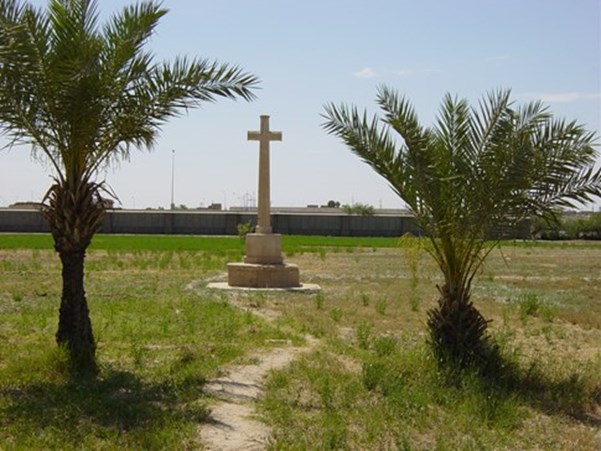 Above: The pension card for John Sinclair (Picture from The WFA Article on a 'Tour of Mesopotamia 2003')

William McAdie served as a Private in 8/Seaforth Highlanders. Born in Thurso on the mainland, he was boarding in Westside, Stroma and working as a labourer on the pier works. William died of wounds in France on 5 January 1917. His grave was subsequently lost and he is commemorated on the Thiepval Memorial in France.

William’s brother, Alexander, served as Lance Corporal in 1/Seaforth Highlanders and was killed in action on 10 March 1915. He is commemorated on the Le Touret Memorial in France. As with David Campbell, it is likely that he never lived on Stroma and is therefore not included on the War Memorial on the island.

The final two men commemorated on the War Memorial were both serving in the Royal Naval Reserve.

David Manson was born on Stroma in August 1897 and lived with his father David and mother Kitty at Westside. He enlisted on 15 September 1916, serving in Portsmouth. He died of influenza and pneumonia on 3 March 1919 whilst on demobilisation leave at Strome. He is the only casualty from the island to be buried on Stroma. 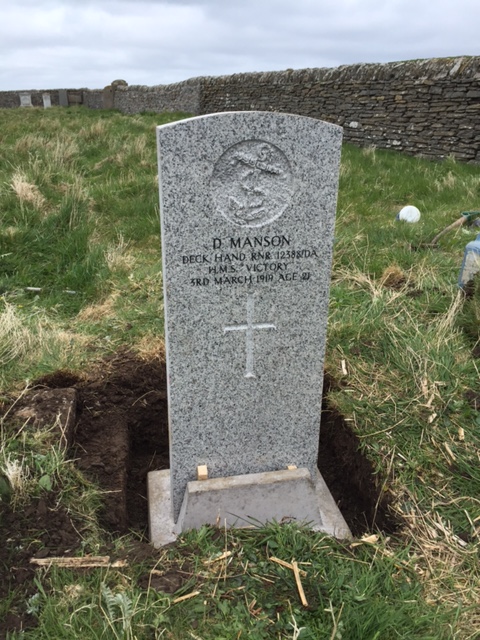 The final man named on the Stroma War Memorial is Seaman William Sinclair. William was born on Stroma in June 1898, the son of Angus and Elizabeth Sinclair who lived at Treesgo on the island. He had enlisted on 2 January 1918 but barely three weeks later, he died of measles and bronchial pneumonia in Portsmouth on 25 January 1918. He is buried in Haslar Royal Naval Cemetery. 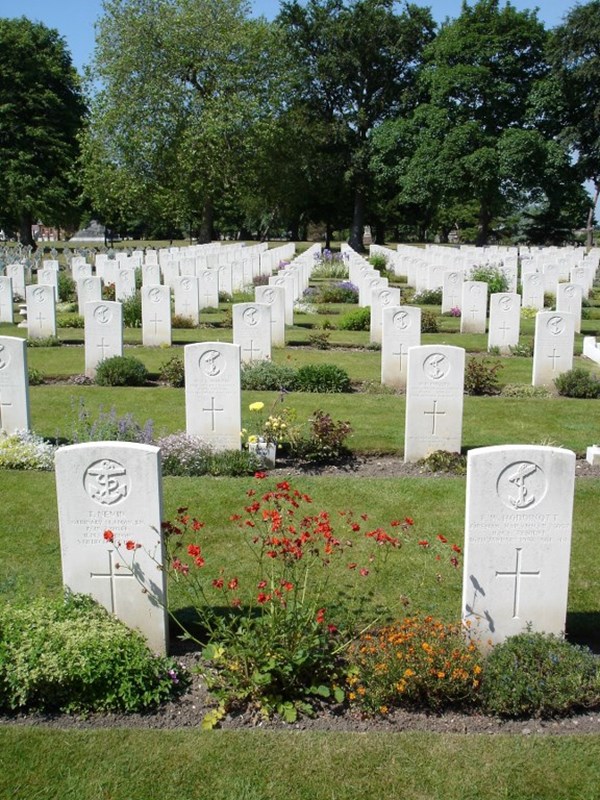