A Second Alternative Guide to the Western Front (extract)

It is not possibly to copy the entire 144 pages of this Second Guide, but below is an extract of just three pages of this edition. This is not edited other than the provision of photographs which have been included in this on-line article.

Gun Fire 26 is available to be read in full via THIS LINK. 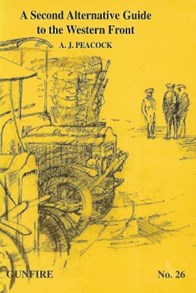 Almost due south of Cambrai. A dispatch from Roland Hill published in the Times of 30 November 1917 described how units of the Canadian cavalry got nearest to Cambrai of any Allied troops on the first day of Byng's offensive. Tanks went over in the direction of Masnieres, flattening the wire, to be followed by units of the Fort Garry Horse. They took the village, 'one battery of German guns, and scores of prisoners - among them a complete Engineers' staff, with valuable plans of the district.'

They crossed the St Quentin canal on a temporary bridge and to the left of Rumilly they charged a battery which 'had hastily been unlumbered, and were [sic] firing at sight range on three or four Tanks.' They 'charged with drawn sabres, two rows swerving to the right and two to the left. The outside columns went on and surrounded and killed [nearly] every man and horse where the limbers were.' The horsemen then attacked the enemy in a sunken road to the right of Rumilly-en-Cambresis, going over 'the mi nature precipice right on top of a German machine-gun party, and by sheer luck not a man was unhorsed. It was a massacre' - with 50 Germans left dead. The Canadians were then pinned down in the sunken road. They stampeded their horses towards the enemy lines, then fought their way back to Masnieres, using their sabres. The episode, Hill concluded, was 'one of the most stirring cavalry adventures of the war.'

The War Illustrated of 5 January 1918 carried photographs of 'Men of the Fort Garry Horse who returned from the charge at Cambrai, November 20th.' and a photograph of Lt H.Strachan 'awarded the Victoria Cross for his leadership of the charge.' Masnieres was 'given up' by the British on 1 December. The destruction of the Masneres bridge by the Germans was held at the time to be a major reason for the advance being held up. Unlike at Marcoing, where the machine guns of a tank stopped the demolition of a bridge, at Masnieres the Germans seriously damaged the structure, and a tank fell into the canal when trying to cross it. 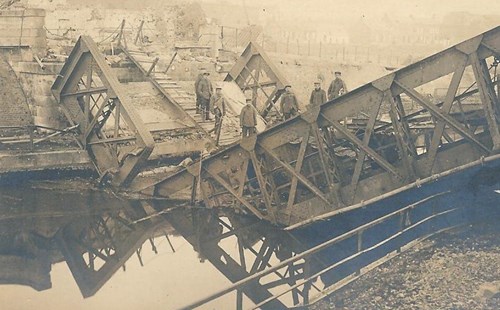 A village in the Champagne country off the RD382 going north from Ste Menehould. Just outside the Camp de Suippes, a restricted area. It can be reached by going north on the D66 from Somme-Tourbe then going north to Virginy and crossing the Tourbe on the D766. Massiges, and the nearby Chausson Farm, figured prominently in the French advances of the autumn of 1915 and the inevitable German counter attacks. Early in November, for example, the area changed hands many times, with the Germans using liquid fire in their attacks. On 6 November 1915 the Times reported that fighting north of Massiges was going on with 'unabated violence.' Just north of Massiges, between it and Chausson Farm, is Mont Tetu which featured prominently in the fighting of 1916. In June it was particularly intense on what was referred to as the Maisons de Champagne - Mont Tetu front, with the Germans achieving some shortlived successes. Leaving Massiges, and going out of the village, and upwards, past a crucifix, one arrives at the Main de Massiges, the scene of the fighting described above. From there, there are wonderful views of the countryside, but nothing to indicate war-at least at first sight.

However take a left turn at the sign and drive as far as possible. There one comes up against the perimeter of the military camp. It is a restricted, and very dangerous area, with unexploded shells lying about in profusion. By walking around it, however, one can see a massive trench system and assume where it would have run over the arable fields.

At the aforementioned sign, on the right, there is a solitary tree. Behind it, on the other side of the track, and quite invisible from the track, are what look like two massive mine craters, and the usual trenches. The Main de Massiges is a very impressive area. The Times reported on the 30 September that Colonial Infantry had taken Massiges and repeated references were made to Hills 191 and 199 which changed hands several times. 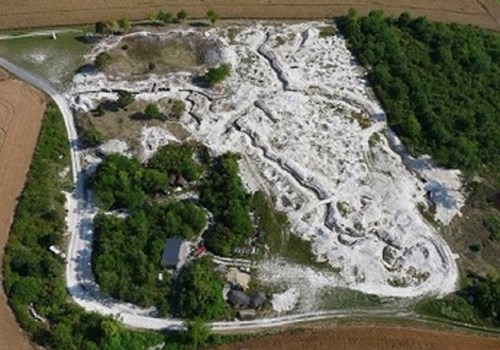 NOTE - Main de Massiges mentioned in this entry is featured in the WFA 2020 Calendar which remains available.

On 4 November the German 'Main Headquarters report' recorded a success. 'North of Massiges', it said, 'our troops stormed a French trench, nearly 900 yards long, close to our front. The greater part of the occupants were killed, including two officers, one of them a major. Twenty-five men were taken prisoners.' Two days later the Times published a report on the current fighting in the Champagne country from a special correspondent, in which he mentioned the source of the place's name. The Main de Massiges, he wrote, was a 'formidable German position on the spurs of a steep hill like the fingers of an outstretched  hand, from which the Germans were driven out chiefly by hand-grenades after a charge across 800 yards of flat open valley. To the rear, for two or three miles along the Valley of the Tourbe, the chalk hills on each side are honey combed with underground dwellings. The fringes of the hand-index, medius and annulaire - are a network of deep boyaux, leading to the front trenches on the reverse side of the hill.' 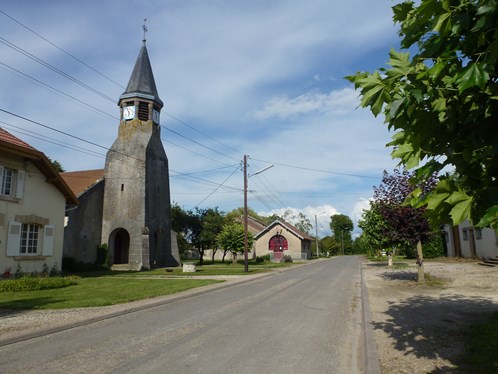 Along the road from Mouzon to Damvillers there are two huge emplacements which must be a part of the Maginot Line. They are well worth a visit. They cannot be missed, though one is below the level of the forest road.

A place of no great significance in World War One, (image below) but in July 1918 the German 1st Army had an observation post slightly to the west of it - on Hill 157. The Kaiser went there on 15 July 'to attend in person the artillery softening up which would precede' the Friedensturm. First Army, under General Von Mudra, held a line which stretched from some six miles west of Reims to a point about halfway between Prosnes and Souain. 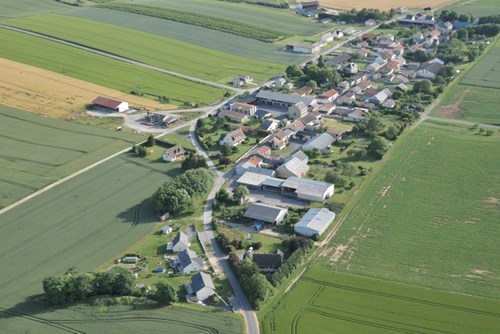 To the north north west of Reims. Merfy castle was the HQ of General Foch in September 1914; it was later 'converted by the Germans into a blockhouse.' A little to the north is St Thierry, a place continually bombarded by the Germans for the four years of the war. The 18th century Chateau of St Thierry was devastated, and the church was totally ruined.