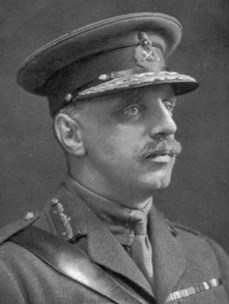 Brigadier General R J Kentish DSO was the inspirational first Commandant of the 3rd Army School and Senior Officer's School. From December 1917 until the Armistice he commanded 166 Brigade in the 55th West Lancashire Division. He was known and respected by many senior commanders including Field Marshal Haig.

DRAMATIS PERSONAE: King Albert and his Queen and family; his victorious army; millions of his loyal subjects and thousands of French, British and American soldiers, Raymond Vaxellaire, some Belgian 'lovelies' ---  and myself and three Lieutenant Colonels!

Next to the announcement of the Armistice, which Marshal Foch had granted to the beaten 'Huns' just ten days previously, the most impressive moment of the War, certainly to me, and probably to all, who were privileged to witness it, was the return of King Albert to his Capital, at the head of his victorious Army, and the day, with all its happenings, will surely go down to posterity as the most historic of the Great War.

Never before in history, had a King, after being driven from his Palace by an invading army, and after four long and terribly hard years of war, during the whole of which he had remained in the field at the head of and commanding his Army, returned victorious and in triumph at the head of it, the invader fleeing before him and the Armies of his Allies.

But this is exactly what happened to King Albert and it was not surprising that his people, who had been under the heel of the hated ‘Hun’ for four long years, just went mad with joy, when they saw their King, mounted on his charger, with his Queen also mounted at his side and followed by his victorious Army, come back to them with bands playing and with colours flying on that bright sunny November day!

At the time I was billeted with my Brigade, the 166th, 55th Division, in the little town of Ath, about forty miles to the south-west of Brussels, and I had been told by Division that the King was returning on the 22nd, and that all ranks not required for duty could go to Brussels and see the King’s return, provided they could find their own way there!

With the help of ’Friends at Court’ I succeeded in obtaining eight lorries for my men and a car for myself and off we all started at daybreak, so as to arrive in time to get a good view, and it was just as well that we did, for, I've never seen such crowds of people as there were in Brussels on that great day!

The sun was shining brilliantly as we entered the City, most of us for the first time, and such a scene probably no one had ever seen before! The people, as I have already stated, had gone completely mad with joy and from every house and window hung the Belgian National flags, and from many the flags of the Allies too!  Every man woman and child carried a flag but where they had got them from Heaven only knows!!

All were moving in the same direction, namely to the Royal Palace and to the streets along which the Royal Procession was to pass on its way to the Palace and it was with the greatest difficulty that I and my little party made our way to the Maison Vaxellaire situated in the Grand Boulevard Anspach.

This great store was in effect the ‘Selfridges’ of Brussels and belonged to the Vaxellaire family, who happened to be good friends of the Belgian I was billeted on in Ath, and it was he who had given me a letter of introduction to Raymond Vaxellaire, the head of the firm.

Arriving at last at the entrance I inquired for M. Vaxellaire and in a moment or two he arrived. I told him who I was, where I had come from and at the same time I handed him the letter of introduction.

This he opened and after reading it said at once: "Mon General, je suis enchante de vous voir et vos officiers ici chez ma maison! C’est un tres tres grand honneur de recevoir un general de la brave armee brittanique" and then, when he had finished and I had presented my little party to him, he said in perfect English, for he knew England almost as well as he knew his own country, “Come, please, follow me,” and he took us up to the first floor, where we found many members of the Vaxellaire family with many of their guests, and to us straight off the battlefield, it was a very big AND ---- a bevy of lovely girls, dressed in the Belgian National costume lined up and forming a kind of bodyguard on each side of us, as we entered the room!  Every one of them a winner!

They were the ’Cochran's Young Ladies’ of the Maison Vaxellaire, and their job that day was to look after the Vaxellaires’ guests and how well they did it!! Champagne corks --- where the champagne came from nobody had the slightest idea or cared --- were already popping at that early hour, 10 a.m., and the King wasn’t due to pass until 12 noon!

But there was no such thing as ’early hours’ or time on that great day --- for it was just one great ’fete nationale’ when nobody cared what they drank, what time they drank, how much they drank or indeed how much they did anything, so great was the reaction after four terrible years under the heel of the greatest brutes the world had ever known!

To me it appeared that they just seemed to cry out:  “We are free! Free to come and free to go, whenever and wherever we please!  Free to do and free to say whatever we please without fear of arrest, a cell, and, more often than not, a bullet!''

And it was amongst this happy, laughing, joyous gathering of Belgians that we found ourselves, and how much we, who had also been through hell --- absolute hell --- since 1914, in an atmosphere of foulness e.g. gas, high explosive, mud, shells and all that goes to make modem warfare the foul thing it is --- how much, I say, we appreciated it!

As the hour approached we all went to the open windows, which looked on to the Boulevard Anspach and the sight that met our eyes was almost unbelievable --- just one vast sea of colour as far as the eye could see, whether one looked up or down the great street, with a dense crowd of people singing, shouting, embracing and crying --- and there were many crying ---at the very thought of being back in a world many of them thought they’d never see again! 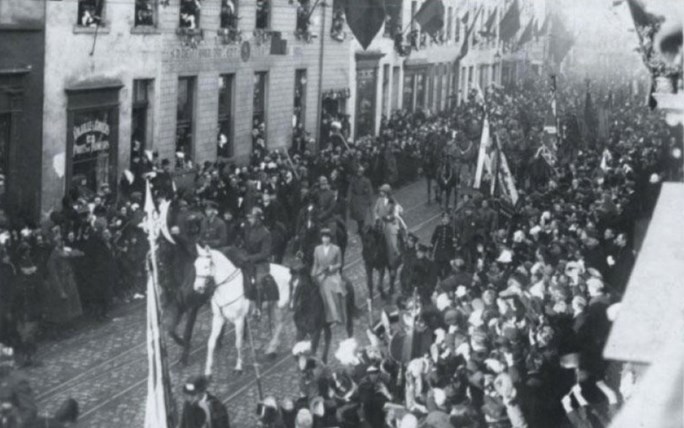 And then, as we looked on in wonder and astonishment at the scenes below us, we suddenly heard the sound of music, a band --- a military band --- and at once there went up a great cry of ”Les voila! Les voila! Vive le Roi! Vive le Roi! Vive l’armee beige! Vive les Allies!” and then all around us: ’’Vive l’armee Brittanique! Vive les Anglais! Vive le General!” ---  and then suddenly, whilst cries rent the air and with the music growing ever louder, there appeared coming from a side street into the Boulevard Anspach at the comer where stands the famous 'Palais d'Ete’ first a steel helmeted band, behind which rode a Commander followed by a column of khaki-clad soldiers.

This was the American Division leading the Royal Procession, and the crowd gave them a tumultuous reception, as they passed, fine upstanding men with ‘Yankee' written all over them and their every action!

Following the Americans came the Fifteenth Scottish Division preceded by their pipers, nearly a hundred of them, and, as the Battalions of kilted Highlanders following the pipers came in sight, first the Black Watch, then the Argyll and Sutherlands, followed by the Seaforths and Gordons, their kilts swinging, I was going to say almost from one side of the street to the other, people just went mad!, and I wasn't surprised, for it was indeed a magnificent spectacle to see these splendid Highlanders, who had fought right through the War, come marching along! Personally I had never seen a finer sight, since I had joined my Regiment in Alexandria some twenty years ago!

Then followed a Division of French in their light blue uniforms, every man wearing round his left shoulder the yellow and green cord of the Croix de Guerre, showing that the whole Division had been specially decorated for gallantry in the field, and they too received a magnificent reception!

And then came a tremendous cheer, which might have been heard in Berlin, had the wind been blowing East at any strength, for there, riding on his horse with the Queen at his side and their children following, came their beloved and very gallant King Albert, leading his brave Army back to his Capital!

The scene as the King came in sight was quite unforgettable --- no words can describe it!

The people just fell on each others necks, one moment laughing, next crying --- and indeed there were very very few in that vast crowd, who were not affected by the wonderful scene --- and then again laughing as the King, with his Queen, to the cries of uVive le Roi! Vive la Reinel” passed by with his gallant Army on his way to his Palace.

I have told this story of King Albert’s return many a time since, but never without feeling again some of the emotion that I felt as he passed by on that great and historic day, and along with, I am sure, thousands of others, I am devoutly thankful that that great man is not alive to-day to witness the terrible tragedy that has befallen his beloved Belgium to-day.

[Note: King Albert was killed climbing in 1934 and in 1940 when Kentish wrote this tale Germany had occupied Belgium]

This tale is in the November 2018 ‘Despatch’ which is the newsletter of the Lancashire North Branch. Despatch can be seen on the branch pages of this website and at www.wfanlancs.co.uk.

A photograph of King Albert on white charger is IWM (Q 57670) and film footage of the King's entry into Brussels can be seen on the Imperial War Museums website HERE > Scenes in Brussels  : The state entry of the King and Queen of Belgium into Brussels, 22nd November 1918.
IMAGE: The return to the capital of the royal family and the entry of the Belgian and allied forces on November 22, 1918.
AVB (Collection des Archives de la Première Guerre mondiale (collections diverses), 160, and Collection iconographique, C191)