An Irish Soldier in the British Army 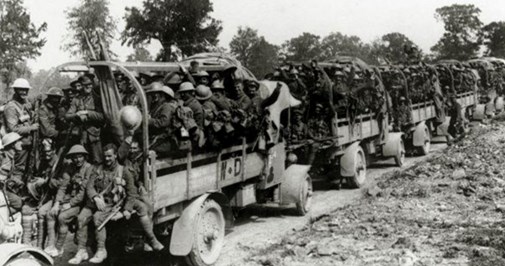 In May 1915, my wife’s grandfather, James Kidney, enlisted at Ennis in Co. Clare in the 8th Battalion Royal Munster Fusiliers, 47th Brigade, 16th (Irish) Division. What follows is part of his story as an Irish soldier in the British army.

James Kidney was in 8th Battalion Royal Munster Fusiliers until the Battalion was disbanded after the Battle of Guillemont-Ginchy in 1916. In 1917 he was in 2nd Battalion. In January 1918 James Kidney was seconded to the Tank Corps. 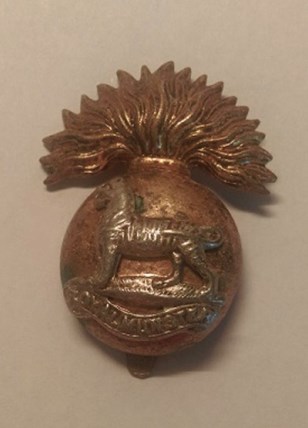 An Irish soldier in the British army.

The 16th (Irish) Division had been formed in September 1914 with its Headquarters in Dublin. But because 10th Division had priority in organising and first claim on accommodation and training areas, Headquarters 16th Division was established at Mallow, Co. Cork.

The Division was a long time getting to the Front. Training was slow because of a shortage of weapons and equipment and because of difficulties in recruiting for the last Brigade (49th).

Following months of training in Ireland, the Division left in September 1915 for a final three months of training at Blackdown near Aldershot in Surrey. Training was very poor - it mainly consisted of route marching and limited target practice. After a royal inspection by Queen Mary on 2 December the 16th (Irish) Division, 47th and 48th Brigade (but not yet 49th Brigade), arrived in France on 18 December 1915.

The early months of 1916 were spent preparing men for the ordeal of trench warfare. 16th Division’s first deployment was in the muddy trenches around Hulluch in the 1915 battlefield of Loos.

A German deserter warned of the use of gas

Orders were given to reinforce the barbed wire, blankets soaked in ant-gas chemicals by Vermorel (i) sprayers were placed over entrances to dug-outs and respirators were made ready.

The available respirators were inefficient compared with later designs. They were flannel ‘PH (Phenate Hexamine) helmets’ and the soldiers had doubts about their effectiveness.

At  05.10, they released their chlorine gas mixed with smoke. Visibility in the Irish trenches was reduced to three yards, such was the concentration of the cloud. At the same time, German artillery bombarded the Irish communication trenches and rear positions - the latter with gas shells.

At 05.55, the Germans exploded two small mines under the Irish front line followed by a further intense bombardment and the release of another gas cloud.

German infantry advanced and managed to get into the Irish front line trench.

Although German shelling had blocked communication trenches and cut telephone wires, making the sending of orders extremely difficult, many Irish company commanders sent forward reinforcements on their own initiative and the German intruders were forced out of the Irish trenches. Enemy dead counted in front of 48th Brigade amounted to approximately 200 and, in front of 49th Brigade, 250.

Then the wind changed direction and blew the gas clear of No-Man’s-Land and back into the crowded German trenches. Now, British heavy artillery opened up - some from a considerable distance away - and caused massive German casualties.

According to the 'Official History' the attack was over by 07.30.

Then came the clearing up – and not just of the smashed trenches.

An officer of the 7th Leinster Regiment, Lieutenant Lyon, had the terrible task of gathering the dead.

"They were in all sorts of tragic attitudes, some of them holding hands like children in the dark."

He and his men found themselves pestered for the next few days by "half-poisoned rats by the hundred".

The Chaplain to the Dublin Fusiliers, the famous Father Willie Doyle, described the scenes after the attack in a letter home to his father:

"Many men died before I could reach them and were gone before I could pass back. There they lay, scores of them in the bottom of the trench, in every conceivable posture of human agony; the clothes torn off their bodies in a vain effort to breathe while from end to end of that valley of death came one long unceasing moan from the lips of brave men fighting and struggling for life."
On 29 April there was another release of gas at 03.45. Fresh Irish troops were relieving those who had taken part in the previous attack and suffered casualties. 8th Munsters were in the process of taking over from 8th Dublins when this attack came and lost three officers and seventeen men.

Small groups of Germans attempted to advance towards the Irish front line but were either shot down or forced to retire by rifle and machine gun fire.

Once again, the wind direction changed and the gas blew back into the German trenches where troops were seen massing for an attack. Abandoning them, the Germans were caught out in the open by Irish artillery and dispersed.

Clearing up the mess continued, this time, uninterrupted by German attacks, and the Hulluch sector remained quiet for some time.

Irish casualties had been high

Gas casualties were high. Why was this?

The Vermorel sprayer-soaked anti-gas blankets were found to have been ineffective. The soldiers’ doubts about the ‘PH helmets’ proved correct - many had been lethally inadequate. However, initially, senior officers preferred to blame the men for "bad gas discipline". This was a nasty slur, tantamount to "It was all thick Paddy’s fault". However, all the soldiers killed by gas were found to have had their helmets on correctly and the truth had to be admitted and, indeed, written into the ‘Official’ History (ii). The new kind of ‘box respirators’, worn by the Lewis gunners, were found to have worked well and production of them was increased. During the five months the 16th Division spent in the Loos sector it suffered at least 6,000 (i.e. 50%) casualties including 1496 killed.

In 1996, members of a Dublin Corporation housing maintenance team were clearing out a house in Blackrock, Co. Dublin. In the attic of this old house, the men came across a British Army death certificate and a press cutting of a Private Joseph Pender, Regimental Number 8477, of 9th Battalion Royal Dublin Fusiliers. The date on the death certificate was the 27 April 1916. Cause of death was gas poisoning.

Joseph Pender was only seventeen years of age. Another seventeen-year-old to die of gas poisoning was Paddy Byrne of 19 Summerhill, in Dublin who had been in 8th Battalion Dublin Fusiliers. Both boy soldiers are remembered on the Loos Memorial.

(i) Vermorel was the name of a French manufacturer of portable sprayers but the name was applied to all the sprayers used and to their contents.

Page 196: ‘... the helmet was obviously insufficient protection against the strong concentration of gas which the enemy was able to produce...’

Page 197: ‘It was not possible immediately to release the troops who had experienced the attack, but ... they were spared all possible fatigue during the following night and day ... and no after-effects were observed ... Their uneasy, and quite justified, feeling that the gas helmet was now a doubtful protection was allayed for the time being by the information that the particular helmets in question had not been properly impregnated with chemicals.’ The ‘information’ was, of course, yet another untruth, but it was a lesser one than that which had blamed the Irish troops for fitting their gas helmets carelessly.

On Monday 24 April the ‘Easter Rising’ had begun in Dublin. After the gas attacks the Germans in front of 8th Munsters raised placards. One read: ‘Irishmen! Heavy uproar in Ireland. English guns are firing on your wives and children 1st May 1916.’ The Munsters, nationalist to a man, fired shots into the placards then captured them in a night raid. They were later presented to King George V. The Irishmen of 16th Division had no sympathy with the rebels in Dublin. However, many strongly disapproved of the manner of the executions of the rebel leaders. But their ‘contract with the British’ had been made and was honoured until the end of the war.

In September 1916 at Guillemont and Ginchy in the campaign on the Somme, the Division suffered heavy casualties and again in 1917 in the Battles of Messines and 3rd Ypres.

In 1918, the Division bore the main onslaught of the German attack on St Quentin and lost over 7,000 men. The survivors were withdrawn and the Division was reorganised. The reconstituted 16th Division now contained only one Irish infantry battalion and was disbanded in May 1919.

Throughout the war the Division lost over 28,000 killed, wounded and missing.

Some of the surviving soldiers (about 100, according to professor Diarmaid Ferriter of University College Dublin) joined the IRA on their return home. Many more joined the army led by Michael Collins during the Irish Civil War (1922-3) fighting in support of the treaty that had been made with the British, which created the independent Irish Free State. In fact, by May 1923 half of Collins’ National Army of 53,000 men and 20% of its 3,000 or so officers had fought in the British army in the First World War.

1916 is remembered, quite rightly, for the sacrifice of the Ulstermen of 36th Division on the first day of the Battle of the Somme. The Division lost 1,944 men killed. It is worth remembering that the 16th (Irish) Division lost more men killed in the same year at Loos and on the Somme – 2663. Such remembrance helps the justifiable ‘greening’ of the account of the First World War in Irish History.

Private James Kidney’s Battalion, 8th Royal Munsters, suffered enormous casualties in the Battles of Guillemont and Ginchy and had to be disbanded. Although the Battalion was formally merged with 1st Royal Munsters Private Kidney was transferred briefly to 4th Battalion and then to 2nd Battalion which went on to fight in the Second Battle of Passchendaele in 1917. In January 1918 he was transferred to the Tank Corps. In civilian life, Private Kidney had been a mechanic and had worked in a garage in Ennis. He remained in the army until 1919. His Service Record shows that he had been hospitalised once in 1916 and had suffered a head wound subsequently. There are no details. In 1925 he died of respiratory failure, leaving a wife and baby daughter. The gas at Hulluch and the fumes from tank engines had eventually taken their toll.

Tom Johnstone ‘Orange, Green and Khaki – The Story of the Irish Regiments in the Great War, 1914-18’ pub. Gill and Macmillan, Dublin 1992

Department of the Taoiseach, Republic of Ireland

For more on the Easter Rising and its centenary

Readers may also be interested in the following book reviews by Western Front Association members:

BOOK REVIEW: Its a Long Way to Tipperary- British and Irish Nurses in the Great War