Cases of 'insanity' revealed in the Pension Records

The Pension Records which have been saved by The Western Front Association reveal an incredible array of information. In this piece we will briefly look at the mental health issues that are revealed on these cards.

Many Pension cards reveal shocking cases of physical injury, but there are a substantial numbers of cards that let us glimpse into non-physical injuries. It should be noted however that not all seemingly shell shock or ‘PTSD’ cases  are what they seem, and we are indebted to Peter Hodgkinson’s excellent article ‘And Bert’s gone syphilitic’ – The Real Tragedies Behind the Cane Hill Hospital Memorial at Croydon'. which should be read in conjunction with this piece.

The first point is that a lot of the cards use language which is obviously less ‘politically correct’ than we are used to. For instance below we see cards noted ‘mental case’ for Basil James Whatley of the Wiltshire Regiment and Walter Sprague Sandry of the DCLI. These cards are obviously less than revealing in terms of additional information. 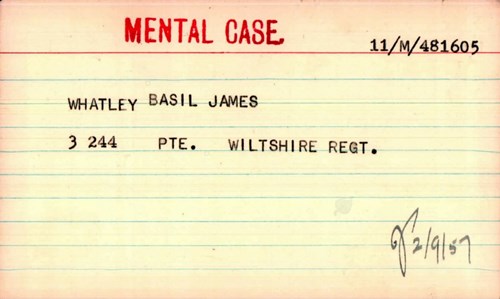 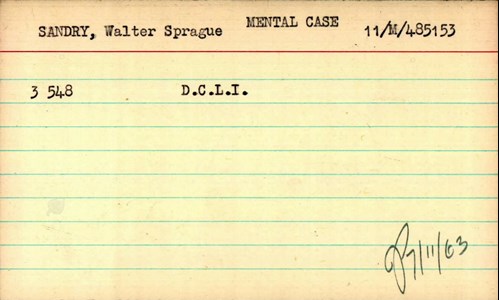 However, the card for William John Sloggett of the Army Veterinary Corps does give some more background and that of Walter William Sutton provides his address and some pension details. 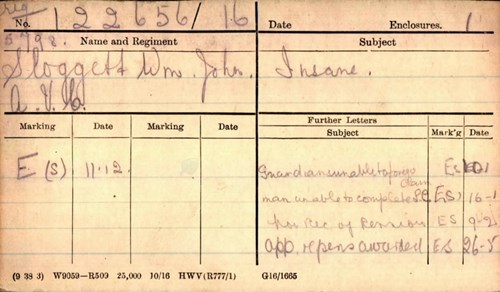 These cards are from the ‘other ranks survived’ set of cards which have recently (January 2021) been made available: these cards can also point to ledgers. The card for Andrew Symington does not give any medical clues, but his ledger does record ‘Shell Shock’. This is a very rare occurrence as this term was seldom used. 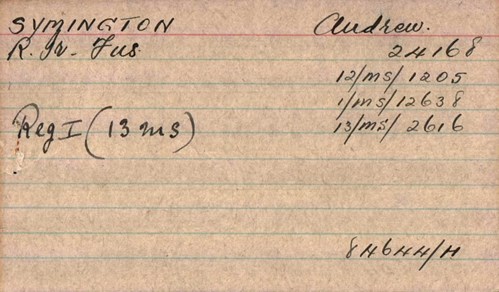 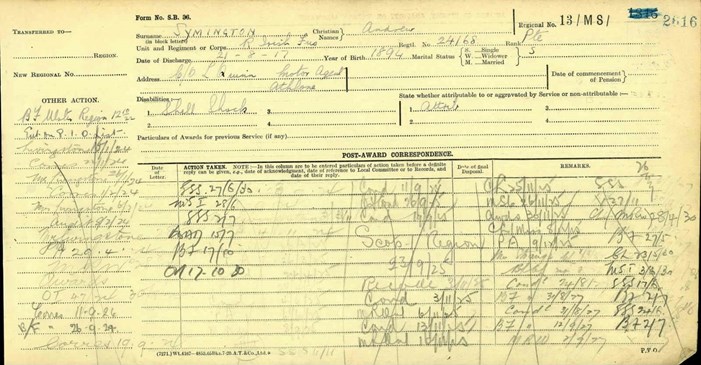 Another ledger for Gordon Swan shows the medical condition of ‘insanity’. 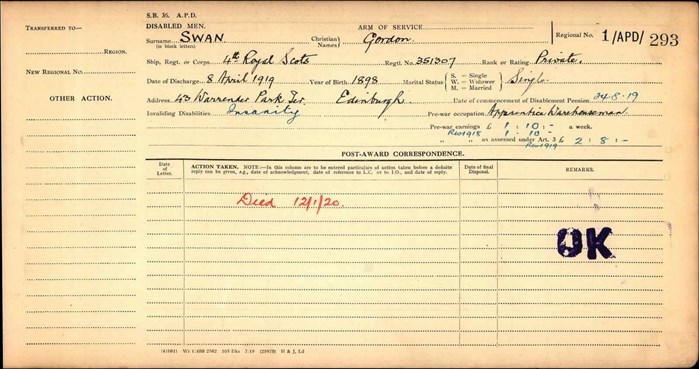 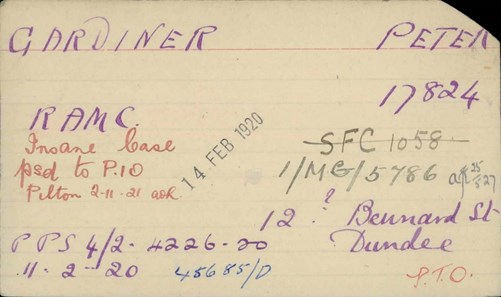 And also Arthur Garrard who was admitted to an asylum. 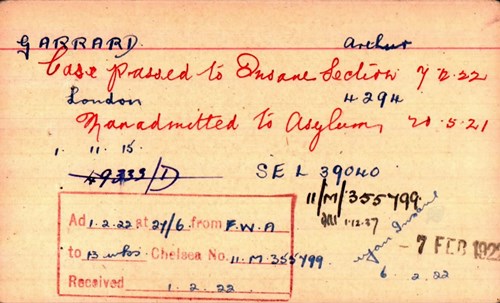 Bert Harvey was also ‘insane’, as was Thomas Lynch 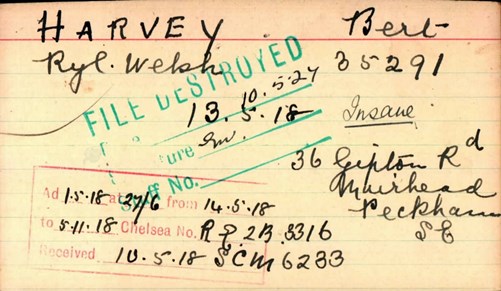 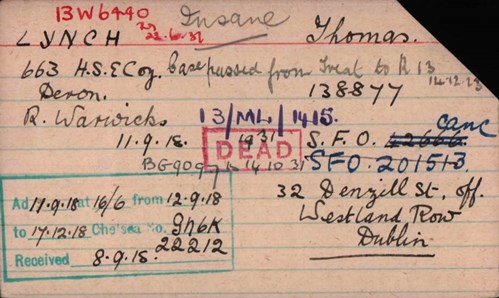 There are other cards which deal with men who died whilst insane. The card for John McKenzie tells us his cause of death was ‘General Paralysis of the Insane’ (sometimes abbreviated to GPI or General paresis, or paralytic dementia). 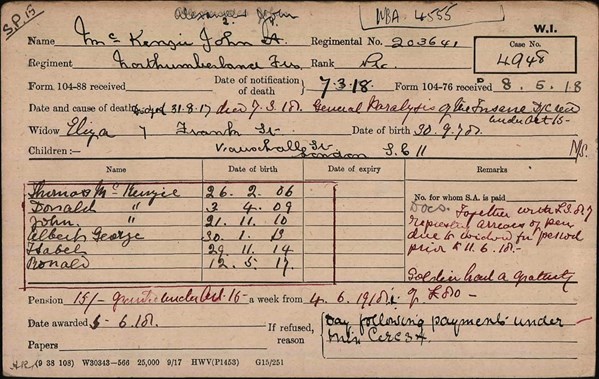 The same can be found on the card of Richard Leonard Skinner. 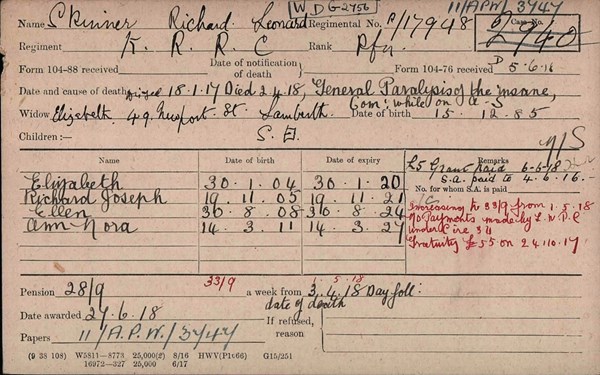 Originally, the cause of GPI was believed to be an inherent weakness of character or constitution. By the mid 19th century it has been linked to syphilis. In 1913 all doubt about the syphilitic connection was finally eliminated.

The death of George John Lammie was noted on this card as being due to ‘paralysis’.  It is not obvious this is due to insanity, but it is known this individual died at Cane Hill Hospital, formerly the 3rd Surrey County Lunatic Asylum. 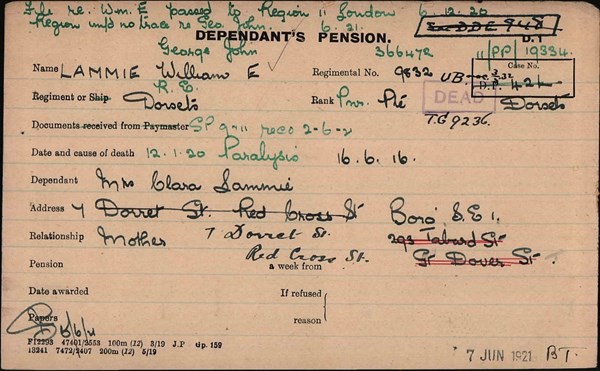 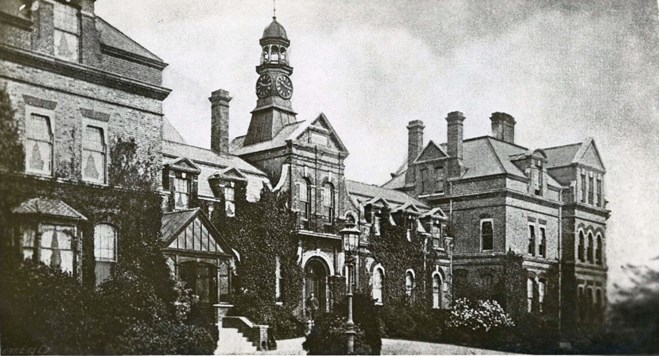 Similarly George Lawrence was noted as having died of TB but he, too, was at Cane Hill. 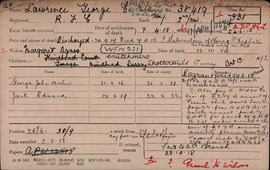 By inserting the keyword ‘asylum’ into the Fold3 search engine it is possible to identify nearly a hundred similar institutions. (We hope this number will increase as further work is undertaken by WFA volunteers on these cards). 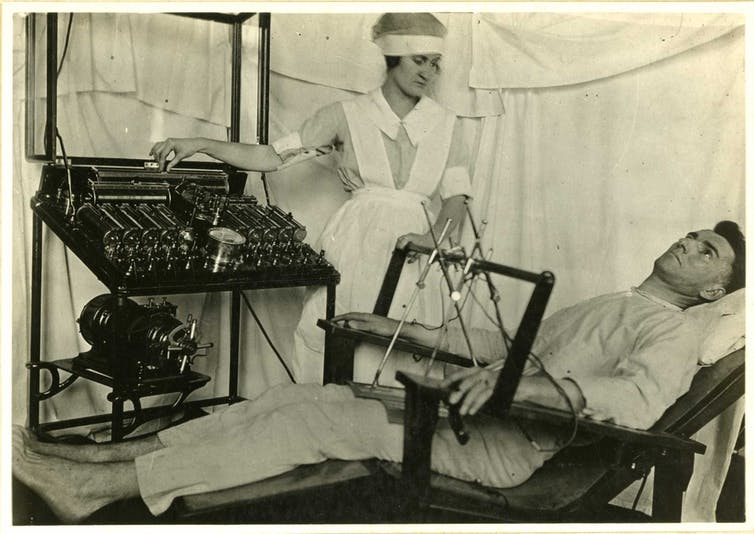 It is not just the soldiers who we see being committed to such institutions, we have the mother of Thomas Hooper. 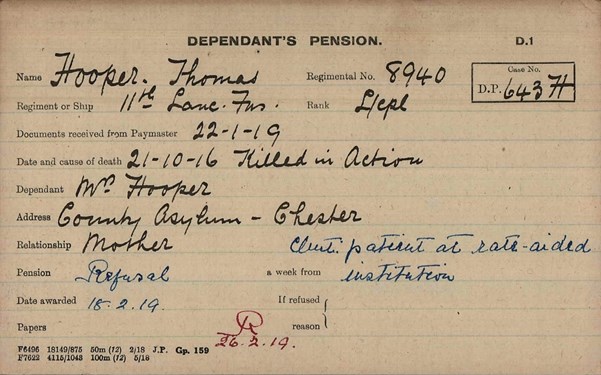 And also Rose, the widow of William Thomas Nicholls who was as Warwick County Lunatic Asylum. 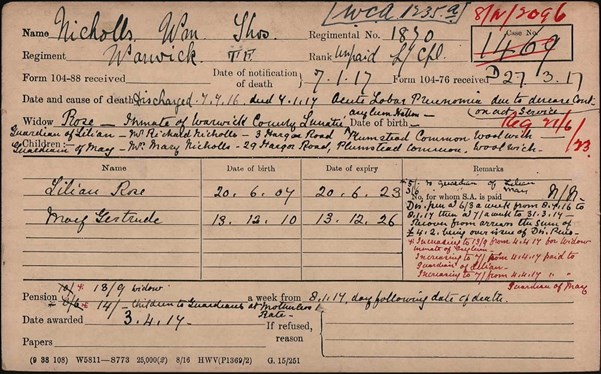 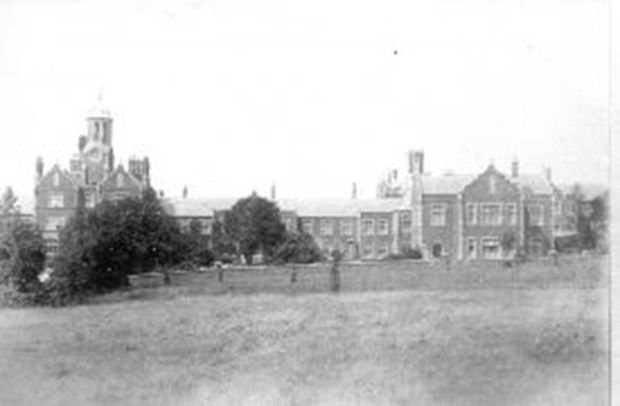 And Ellen, widow of Frederick Coley, who was at Brookwood Mental Asylum. 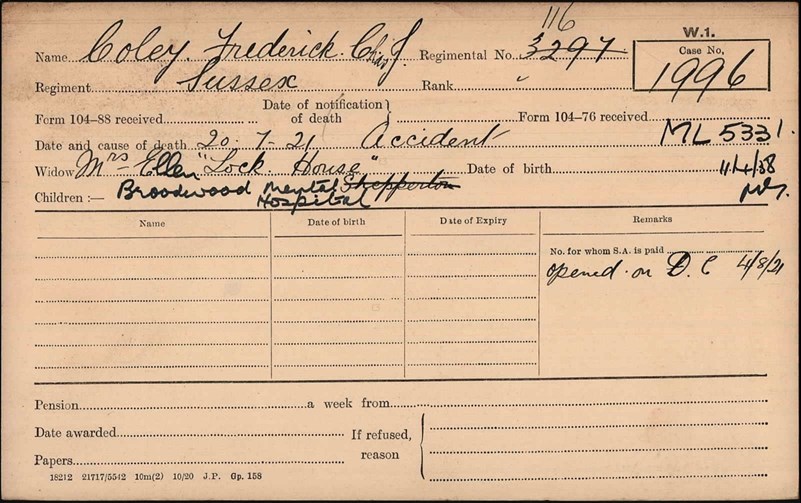 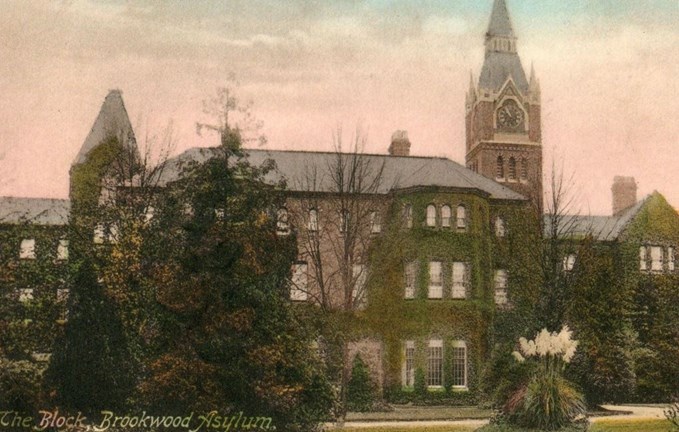 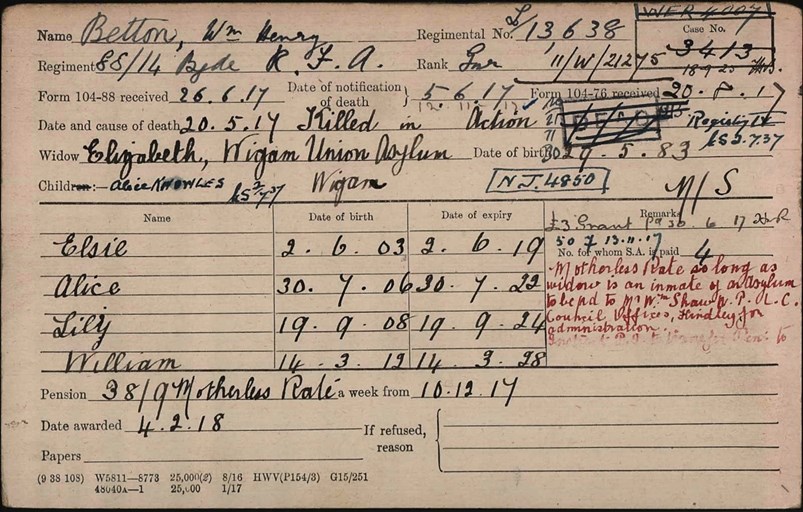 We have 'alias' cases which obscure the issue even more. John Robinson's ledger shows his alias of Groombridge and that he died of ‘disease’. 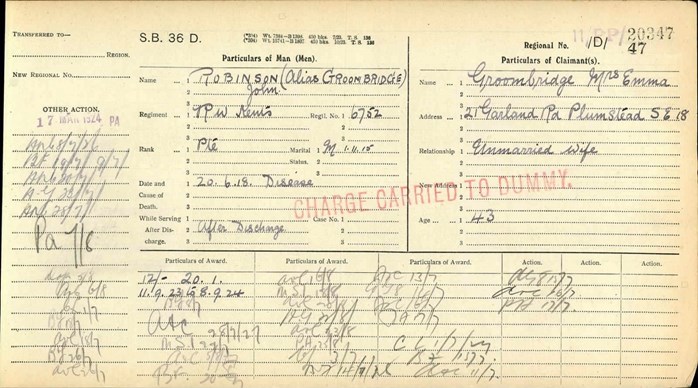 There is no clue here that he was committed to an asylum, but we do know he was at Cane Hill so the absence of any reference to lunacy does not necessarily mean absence of lunacy.

It is of course possible to extract more information from the cards and ledgers and to examine, statistically, how many men suffered from mental conditions. If members wish to tackle this, please contact the author and a project can be set up to look at this aspect of the pension records.