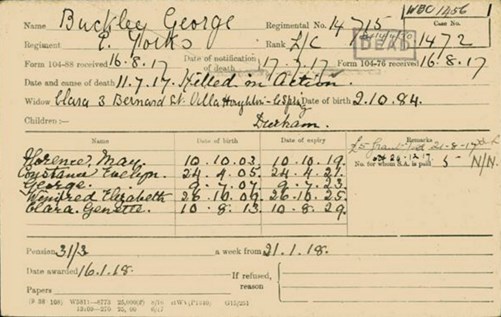 The history of the Great War is not just about generals and statesmen. In examining the Great War, we can often overlook the real people and the real lives that lie behind the "other ranks" who served in their millions. Many died during a long and arduous campaign, and we remember their sacrifices in a number of commemorative ways, not least on 11 November each year. Now, we can also learn more about the many millions of British servicemen and women who came back.

In November 2012, The Western Front Association announced the acquisition of some 6.5 million Pension Records Index Cards and Ledgers (PRCs).

The destruction of the large majority of First World War British service records in 1940 has been a significant barrier for family and military historians for many years. Although the publication of The National Archives' 'Burnt Series' records (those records that survived the 1940 London Blitz) was significant, these records account for only about 30-40 per cent of those five million or so British men and women who served in the Great War.

In addition to the Burnt Series is another set of records, called the 'Unburnt Series' (also known as the WO364 series to The National Archives) . These amount to a further 750,000 records of soldiers who were discharged for medical reasons during the War. They also include some pre-war soldiers whose term of service came to an end before 1920.

Despite the number of documents in both the Burnt and Unburnt series, there are large gaps in these records.

The WFA's Pension Index Cards and Ledgers is likely to be a significant benefit in plugging these gaps. They will provide information to help further research with the Burnt and Unburnt records as well as in other avenues of research.

A random sample of the Pension Record Cards held by the WFA against the Burnt Series (WO364) has revealed only a limited amount of records in common, which reinforces the value of this new archive.

Unscrambling errors in the records

It is notable that errors in the original records can complicate matters. The WFA's archive may be of assistance in identifying such anomalies, which may enable researchers to find the record they are seeking. For example, below is a copy of part of the WO363 record (Burnt Series) for Herbert Bischoff. Note his regimental number (5354).

Pic 2 below: the same soldier's card from the new WFA PRC archive. The regimental number (5334) is different.

(NB Images throughout are not to scale) 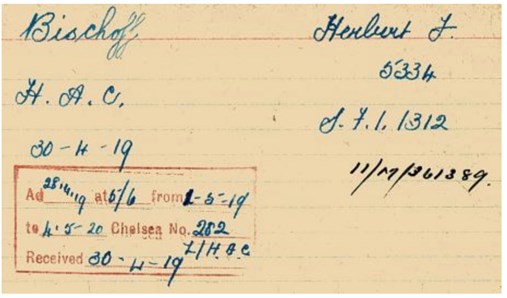 Whilst the different service number for Herbert Bischoff may not have held back a potential researcher in this case, the fact that the PRCs have provided an alternative number suggests a cross check of information may be a worthwhile exercise for those undertaking research.

What these records yield to us

The Western Front Associations's PRCs will assist a researcher to positively identify a soldier and his regimental number(s), not least because of the extra, verifiable information contained on many of the records, such as home addresses and details of next of kin. Once this positive identification of an individual has been made, other lines of research will open up. The PRCs also potentially provide additional unique information such an individual's unit, next of kin, wounds and injuries received (or disabling ailments), recovery from wounds and injuries in the post war years and pension entitlement.

The PRCs archive comprises, in the main, two types of document:

The Ledgers are a series of numerically sequenced books, and are divided unequally into the following five types:

Once a ledger was written for an individual, it is likely an index card was created detailing the unique reference number for the ledger. These index cards were then filed alphabetically in different 'runs' – the run depending on the type of ledger that the card was used to index.

This large group totals approximately 12,000 of the 15,000 ledgers. Most of these relate to soldiers, with sailors and airmen a tiny proportion of the whole. They are split regionally as follows:

For the Disabled Soldiers, Naval Ratings and Airmen (which comprises the majority of the records) the reference number for each of the 100 entries per ledger is prefixed by the regional number (1 to 13), followed by a two letter code, and then the consecutively allocated number. 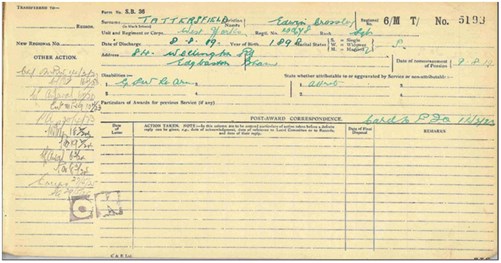 This group comprises about 650 ledgers (65,000 individuals). Again they are split regionally and all regions except the unallocated 9 and 10 are present. The largest single region is region 11 with over one-third of the entire widows' records. This suggests that (assuming the proportion of region 11 records was the same for the Disabled Soldiers, Naval Ratings and Airmen) approximately 19,000 ledgers (1.9 million individuals) from region 11 have been weeded from the Disabled Soldiers, Naval Ratings and Airmen section. 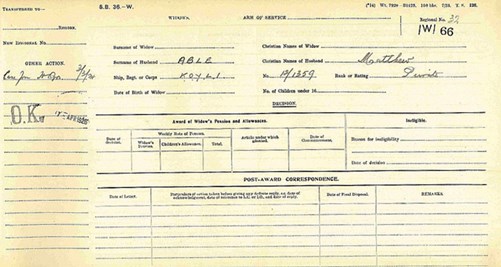 This section comprises some 2,300 ledgers (about 230,000 individuals). All regions are represented.

They are coded Region / D (for Dependents) / sequence number. 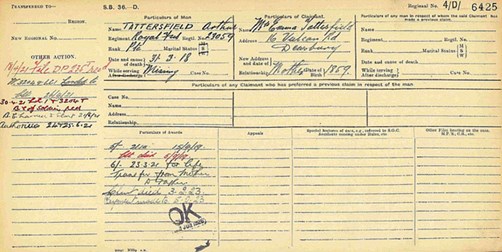 Pic 5 above: the ledger for Emma Tattersfield, who was the mother of Arthur 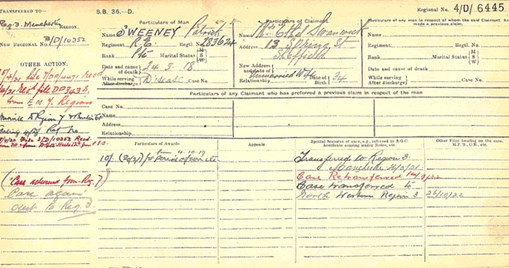 Pic 6 above: The claimant was the "unmarried wife" of Patrick Sweeney

The payment of these alternative pensions is something that requires further research, but initial investigation has yielded the following:

Any disabled man in receipt of pension who makes application and shows that the pension with children's allowances (if any) which he has been granted, together with the average earnings (if any)of which he remains capable, are less than his pre-War earnings, may be granted, temporarily or permanently, in lieu of the minimum pension and children's allowances, a pension which, together with the average earnings (if any) of which he is judged capable, shall not exceed his pre-War earnings up to a maximum of 50s. a week, plus half of any pre-War earnings between 50s. and 100s. a week.

Any widow pensioned .... who makes application and shows that the minimum pension, with children's allowances (if any), which she has been granted is less than one-half of any alternative pension that might have been awarded to the deceased soldier had he survived, may be granted, in lieu of a minimum pension and children's allowances, a pension which shall not exceed one-half of such deceased soldier's alternative pension. The pension issuable to a widow is increased by 1s. 3d. a week when she reaches the age of 45. 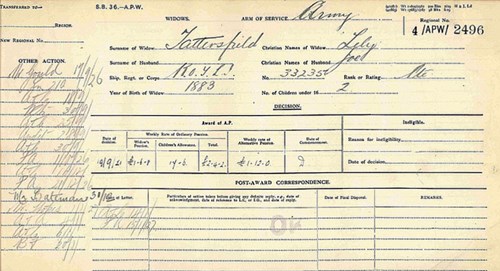 Pic 8 example above: a ledger for an "APW" case

There are some minor anomalies in this latter group which we are still researching.

The administrative regions appear to have operated out of city centre headquarters as follows:

Any claimant moving between regions would have his ledger transferred from one office to another. Evidence of this is seen on the card and reverse below, as a result of his move from Region 4 (North East) to Region 6 (Midlands) in 1923. (There is no evidence of any record for this soldier in either the Burnt Series or the Unburnt Series.) 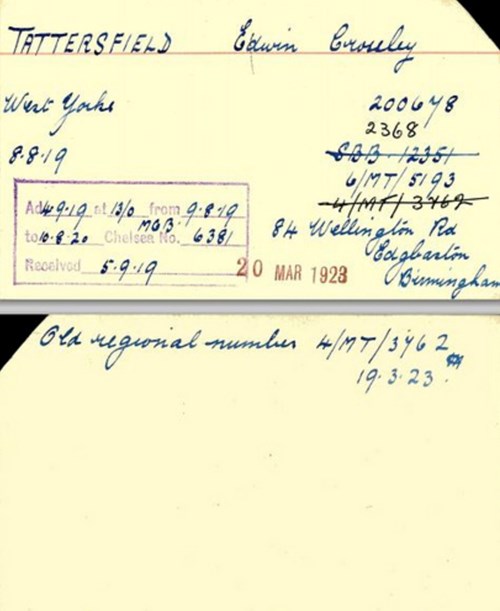 The index cards that were created are an equally valuable source of information. These are divided into five unequal sections:

4i Officers Died and 4ii Widows of Officers (The combined number of cards is approximately 150,000).

Not all of these cards bear a reference that is meaningful. For example, the Herbert Bischoff card shown above provides a number 11/M/361389: this does not refer to any of the records the WFA has acquired. It is possible that this is a reference number to the Unburnt Series file, but at this stage there is no evidence of such reference numbers appearing on both the Unburnt Series and the Index cards. Some of the references are to ledgers that are known to have been weeded.

Within the (widows and dependents) section is a sub section alphabetically located under the letter "I". This is "institutions". Cards for [Town] Waifs and Strays Home and [Town] Children's Home are present. Each card lists the payees of pension who were resident in these institutions. 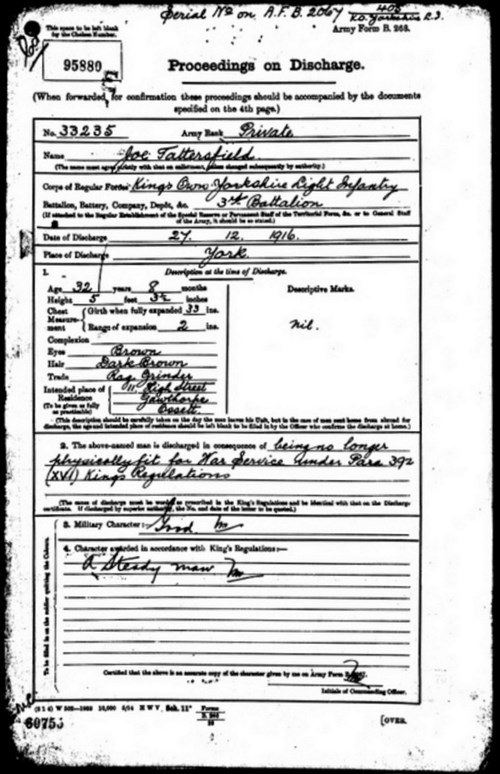 And here - Pic 11 below - is the card for this same individual from the WFA records. 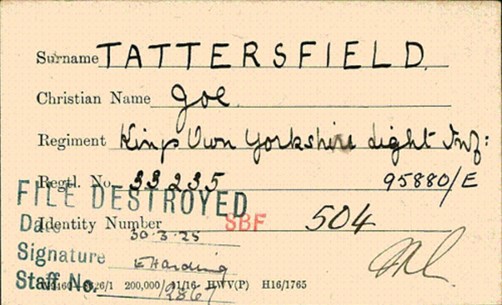 Further research is needed to link the two sets of documents, but the 'Chelsea number' of 95880/E is common to both documents.

This document above explores the PRCs in more detail. We continue to learn more about the archive and we will provide further briefings as more analysis and understanding is forthcoming.