It’s a photograph we had seen before, without perhaps looking at it properly.  An extraordinary image of hardened men, just back from a successful attack on a German trench, an iconic picture from April 1916 of the 1/8 King’s Liverpool trench-raiding party. 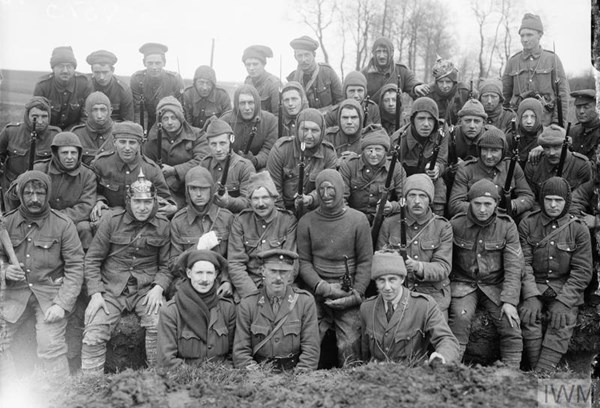 They pose as if in a sport team-photo but some sporting pickelhaubes as trophies instead of cups. Then there it was again, but this time colourised and appearing on the Western Front Association Facebook page and on the website in an article ‘Ernest Brooks and the Photograph of The 'Forty Thieves' by David Tattersfield with help from Simon Jones and Alan Wakefield. 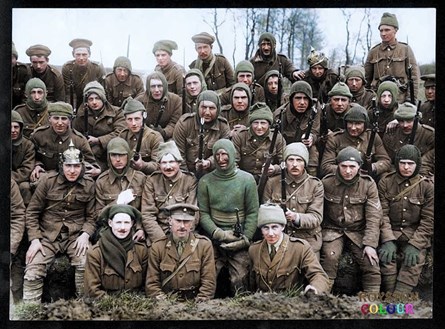 The article mentions that only five names could be matched to faces in the photograph – until now. Today we can reveal another name. And there he is, staring back at you - a very familiar face we had seen many times in Northampton Saints rugby team photos: Percy Wills Fussell.

He usually looks back with a wry smile, with a sense of mischief or of determination.  This time, with bayonet fixed and balaclava pulled well down over his ears it’s an altogether more serious look – the look of a man who had just come in from a successful trench raid where his actions would see him awarded the Military Medal.

You can never be certain that you’ve identified the right man.  Men of course look different even after a few months of war.  A moustache, a hat or a helmet can utterly change someone’s appearance and sometimes you see what you want to see.  But this man is clearly Percy Fussell, from his distinctive eyebrows and the prominent nose. And he’s a big man – a ‘big unit’ as modern rugby players and coaches are apt to say – just look at the hefty shape: much bigger than many of the men around him. He looks every inch the imposing rugby forward that he was. 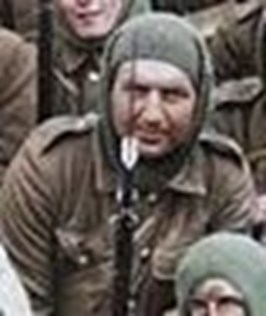 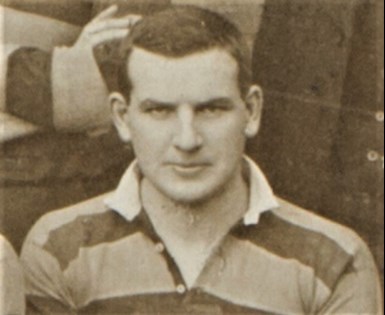 Fussell played for Northampton Saints from January 1907 until April 1911, making 77 appearances in that time.  He came to Northampton, known sometimes back then as ‘Shoetropolis’, to learn about the boot industry.  His was a wealthy family, owning the Fussell & Flock shoe factory in Bristol and the Fussell Brewery in Somerset.  The Fussell family lived in Bath and it was there that he was educated, at Bath College, appearing in many of the school’s rugby team photos.  After a short spell with Birmingham side Moseley, Fussell arrived in Northampton, ‘to study the technical and practical part of the boot industry’ and it was natural for him to gravitate to Franklin’s Gardens, the home then – and now - of Northampton Saints.  The team he joined was establishing itself as one of the leading clubs in the country.   The East Midlands was becoming a stronghold for Rugby Union, with Saints - along with Leicester Tigers, Coventry and Bedford - challenging the prestigious London clubs both in terms of results and international selection.  Saints were captained by the great Edgar Mobbs – the extraordinary charismatic heartbeat of the club, who would go on to captain England, raise a company of men in 1914 and ultimately lose his life in command of the 7th Battalion Northamptonshire Regiment on 31 July 1917 – the opening day of Third Ypres. 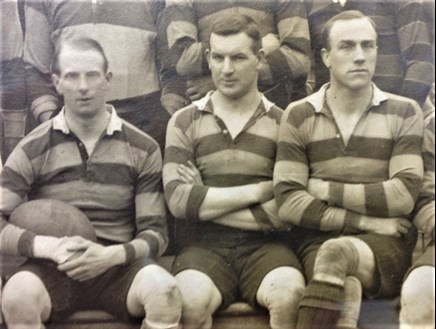 Percy Fussell sits between his captain Edgar Mobbs (left) and Ernest White for a Northampton Saints team photograph in 1910. Edgar Mobbs joined the 7th Battalion, Northamptonshire Regiment as a private and rose to become its commanding officer. Mobbs was wounded at Guillemont on the Somme on 18 August 1916, just few hundred metres away from where Fussell had been captured eight days earlier. Mobbs was killed on 31 July 1917. Ernest White served as an officer in the Royal Garrison Artillery. He earned the MC in June 1918 for extinguishing a fire in a cartridge store next to a gun pit caused by heavy German shelling. He died on 20 October 1918 at 46 Casualty Clearing Station of ‘pneumonia, due to exposure whilst on military duties’ and is buried in Delsaux Farm Cemetery Beugny. © Graham McKechnie

Standing at 5’10’’ does not sound much for a forward when compared to the giants who inhabit the scrum in the modern game, but Fussell was considered a large, powerful man by his contemporaries.  Saints may have been gaining a reputation for daring back play, but Fussell was one of the workhorses in the pack.  ‘A man who did not shine much in the open’, wrote a local critic in the Northampton Chronicle, ‘He always worked hard in the scrum’.  Fussell was ten minutes late for his debut, against Old Merchant Taylors, in January 1907, causing Saints to start the game with fourteen men.  It was not to be the last time that Fussell was to show a rather laid-back approach towards discipline, but despite this inauspicious start, he was to become a regular in the Saints team for the next three seasons.  The high point of his rugby career came not in Saints’ colours, but instead playing for a Combined Midlands team against the touring Australians at Welford Road, when the team, captained by Edgar Mobbs, caused a sensation by inflicting the only defeat on the Wallabies in England. 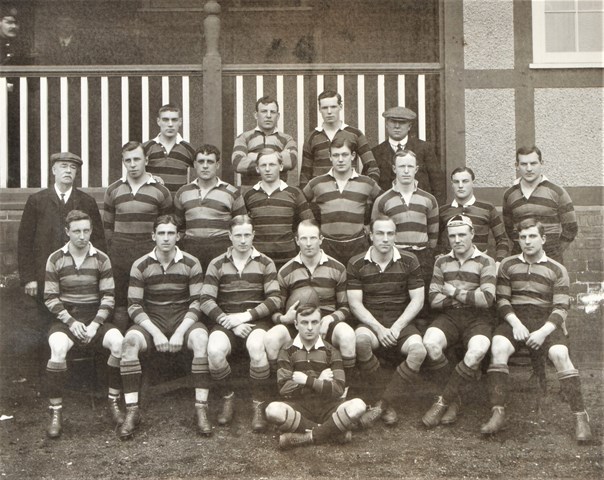 The Northampton Saints team of 1909-10. Percy Fussell is standing extreme right, middle row. Captain Edgar Mobbs is holding the ball, front row, centre, with Ernest White to his left. Sitting front row, second from left is Joe Beasley who became a lieutenant in the 6th Battalion Northamptonshire Regiment. Mentioned in Despatches for his work during the capture of Trones Wood on 14 July 1916, he was awarded the MC in 1917 for ensuring ammunition supply at a critical time. © Graham McKechnie

In July 1910, Fussell’s business took him to South Africa, to learn more about the shoe industry in Port Elizabeth.  He returned to Northampton in the spring to make three final appearances on a rugby field, before he set sail again – from Bristol to Montreal on 31 May 1911 aboard the Canadian Northern Steamships Ltd Line SS Royal Edward – this time for what he thought was for good, firstly to Canada and then to the USA to set up his own shoe business. Crossing the border into the US at Niagara Falls 15 September 1911 he made his way to 32, Brown Street, Waltham, Massachusetts vouched for by a Mr William Selman. At the time the state of Massachusetts was known as the ‘shoemaker to the country’

But just over four years after leaving England, he arrived back in Liverpool in July 1915 – a sense of patriotism and duty bringing him home to join up which he did as soon as he arrived, enlisting as a private (despite his background) in the 1/8th King’s (Liverpool) Regiment (Liverpool Irish).  His training was brief (although time enough for him to have his first brush with military authority, ambling out on parade in August 1915 unshaven, earning himself seven days confined to camp.  Sent to France with the Liverpool Irish in September, he was up in front of the military authorities again a month later, this time after he was picked up in Étaples by Riflemen Perrior and Dickson of the 12th London Regiment attached to the Military Foot Police Regiment for being out without a legitimate pass and being ‘improperly dressed’ .This time they docked Fussell’s pay: 2 shillings and sixpence ha’penny.

In late October 1915, Fussell was on the Somme for the first time, on the Thiepval/Ovillers sector and in and out of the line astride the Ancre – his first taste of front-line trench life, although in what was then still a relatively quiet and cushy area of the Western Front. Fussell’s chance to prove himself as a soldier came in the spring, in the famous trench raid on 18 April 1916, the celebratory get together for which was captured the following day by the camera of Ernest Brooks.  For his part in the raid, which saw the Liverpool Irish successfully bombing several dugouts and killing at least four German soldiers for the loss of just one officer, Fussell was awarded the Military Medal.  Not only were the 43 men who took part in the raid photographed, they also received the personal congratulations of Douglas Haig for what they had achieved.  A couple of months later Fussell was promoted to lance corporal but his war was almost over.  On 8 August he was part of the Liverpool Irish’s disastrous attack on Guillemont.

After initial good progress with their advance, the battalion on their flank was pushed back, leaving the Liverpool Irish exposed and isolated.  They dug in and held their position, but under a ferocious counterattack from the Germans, which included the use of gas, they were cut to pieces. Half the battalion - 502 men - were reported as missing, amongst them Percy Fussell.  Happily, for his family, along with much of the battalion, Fussell had been taken prisoner.  He spent the next two and-a-half years in prisoner of war camps initially at Dulmen then Mulheim in Germany, writing occasional letters back to the Northampton newspapers, chiefly to remember his ‘great friend’ Edgar Mobbs after he had been killed in July 1917.

Fussell was repatriated, arriving in Hull on 27 November 1918 and was discharged in April the following year. He had survived the war and yet his name is inscribed on the war memorial at Franklin’s Gardens along with that of Edgar Mobbs and other Northampton Saints who died. Why?

Well, Fussell was not done with military life. Perhaps he had warmed to the routine, perhaps, having been taken prisoner on the Somme in the middle of 1916, he felt he had not quite done his bit. Whatever the reason, he obviously wasn’t ready to return to the shoe industry and re-enlisted in Exeter on 29 July 1919 in the Devonshire Regiment, sailing for India to join the 2nd Battalion the following month. But his service in India was short-lived. ‘We did not think anything like this was going to happen,’ his grieving father Sidney wrote to the commanding officer on 6 November 1919.  ‘His mother read a letter from him dated Oct 9 saying he was quite well’.  Three days earlier the Fussell family had received the dreaded telegram which began with the ominous words, ‘Regret to inform you….’  Percy Fussell died of appendicitis on 25 October 1919 at the Station Hospital near Shimla.  His body lies in a small cemetery in the foothills of the Himalayas – a very long way from home, a very long way from Franklin’s Gardens and his beloved Northampton Saints but somehow entirely appropriate for the adventurous spirit that was Percy Fussell.

Jon Cooksey is editor of Stand To! – the Journal of The Western Front Association