Members of The Western Front Association will be delighted to learn that another massive release of Pension Record Cards has been made available by our partners Ancestry.co.uk via their ‘Fold3’ platform. As ever, these cards are freely available to WFA members who log into the WFA website.

How can these be identified?

Generally these will have the words ‘Claimant’ on the top as in the case below for John William Bridgers. This is, however, not universal. 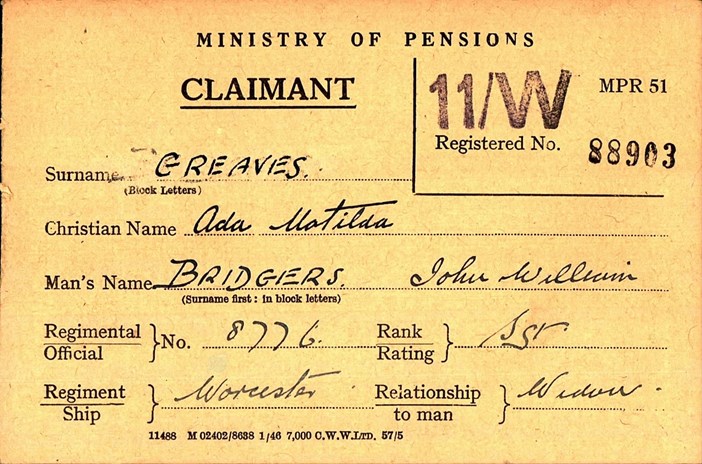 Can results be found under the soldier’s name and the widows/dependents name?

Yes. Searching under (for example) Kate Wilding will bring up the following card (being the card referring to the deceased soldier, Allan Ager of the Royal Sussex) 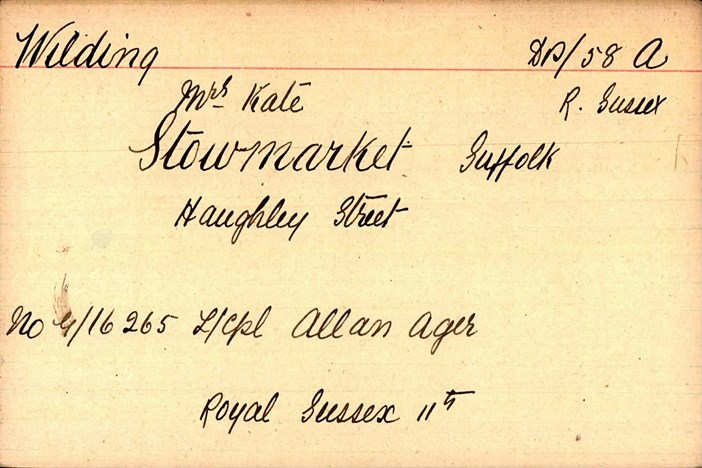 How were these cards used?

As far as can be surmised, the ‘Widows and Dependents’ Cards were used in order to cross reference the names of the claimants to the name of the deceased soldier. For instance, if a piece of correspondence was received by the Ministry of Pensions from ‘Mrs Sarah Beckett’ of 12 Calder Road, Ravensthorpe it would possibly have been far from obvious (unless she gave the name of her deceased relative or his regimental number) who the soldier was. Bear in mind the ‘Other Ranks killed’ cards were reliant on cards being filed in strict alphabetical order of the soldier’s name – this being entirely manual and of course a non-digital filing.

So what the Ministry created was a second set of cards over and above the ‘Other Ranks killed’ set which alphabetically listed the names of the claimants rather than the soldier. Therefore the hypothetical correspondence from the (real) Sarah Beckett could be traced to the card below and from this it can be seen that the soldier’s name was Private Ernest Beckett, number 3445. 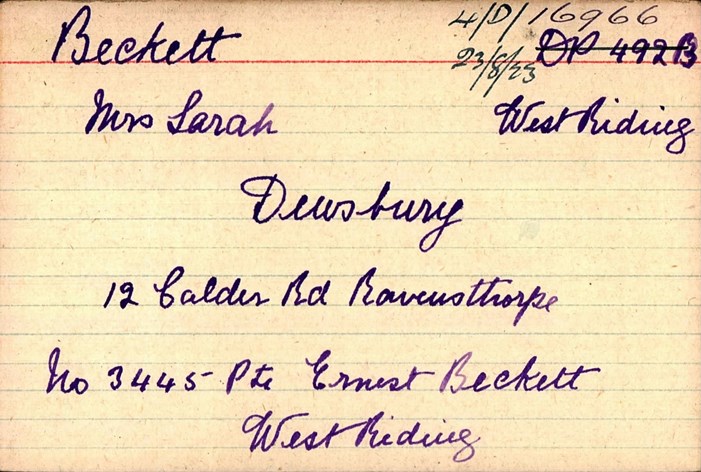 With this information the card below was then able to be found by the Ministry of Pensions clerks (being the 'Other Ranks Died' card for Ernest Beckett). 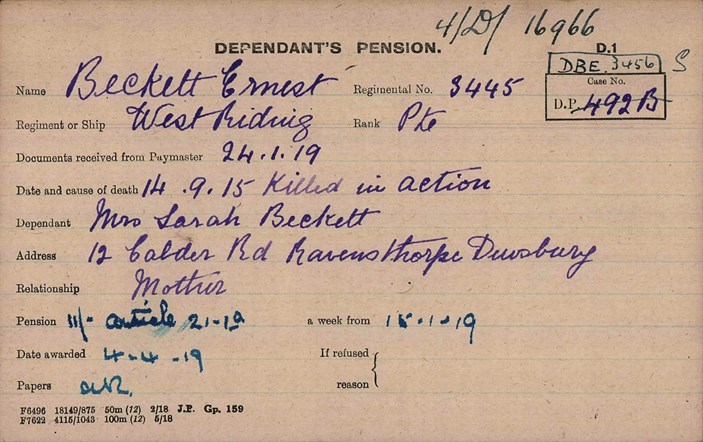 As can be seen from the above, there is no ‘new’ information in the ‘Widows and Dependents’ card for Ernest Beckett other than a date (23/8/23) which can’t be explained. However the fact these cards are available will help in other cases, and the following are a tiny selection of examples where the new cards will in fact assist researchers.

There are a very few examples of soldiers whose Pension card does not exist.  There may be a number of reasons for this after the passage of 100 years. The ‘Widows and Dependents’ card below for Reginald John Zyllwyn-Stewart may be an example of this (it was noticeable simply because it’s (alphabetically) the last of the Widows and Dependents cards 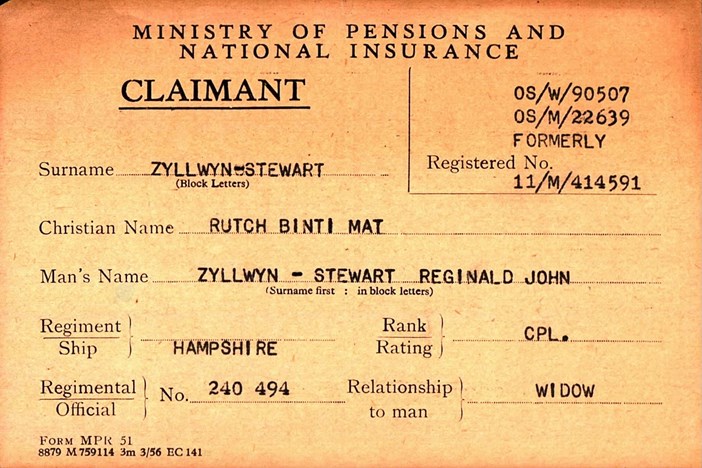 Example (2) Errors by the Ministry of Pensions can be identified.

Again, looking (alphabetically) at the end of the cards we have a soldier with the surname of Zwre. This is of course a very unusual name so it would not be difficult to track down, but if the name was ‘Smith’ there would of course be thousands of possibilities here. As can be seen the ‘Other Ranks killed’ card gives his first name as Mark. But what if this was a mistake by the Ministry? It may be that a search for Mark Zwre would fail. 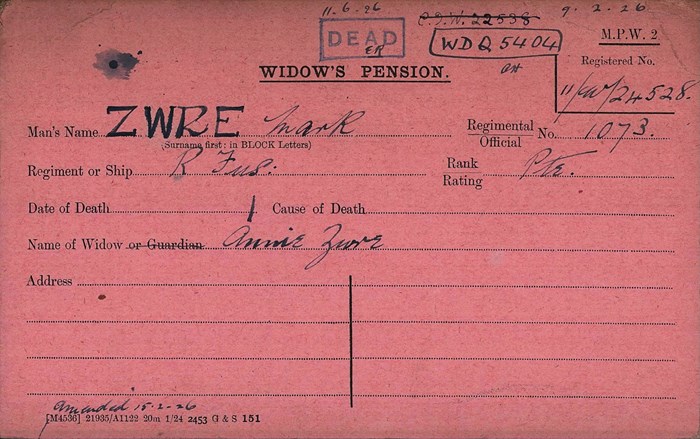 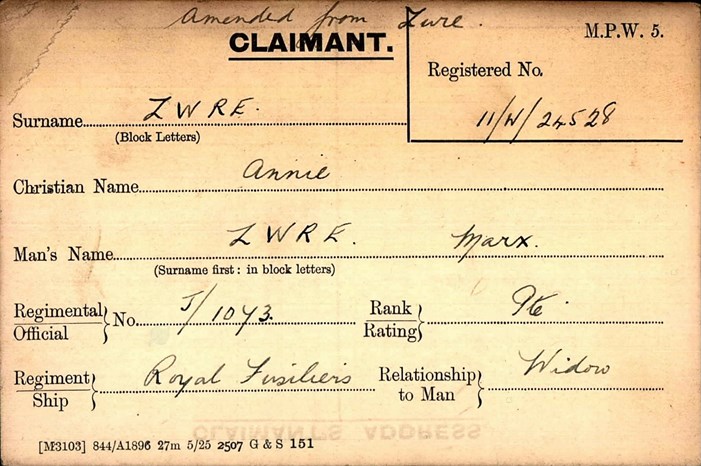 Please look at the card below for Private Aaron of the KOYLI. 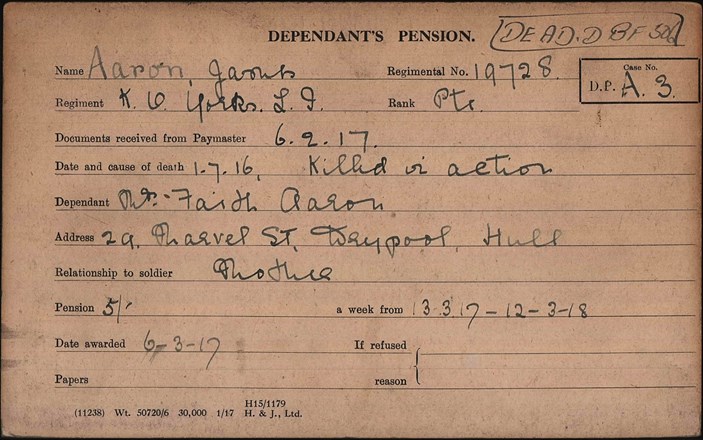 At first glance his Christian name is unclear and appears to be James. Therefore a digital search for ‘James Aaron’ on Fold3 may not bring up this card. However the ‘Widows and Dependents’ card is written in better handwriting and shows that the soldier was in fact Jacob Aaron 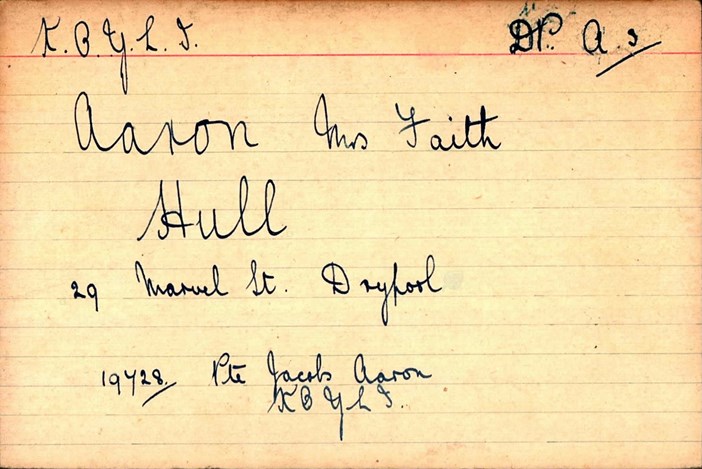 Therefore the ‘Widows and Dependents’ card here will provide assistance in the tracking down of the ‘correct’ soldier.

Joseph Laycock’s the ‘Other Ranks killed’ card shows that the pension was paid at different times to his mother Elizabeth, and following her death his father, Richard. 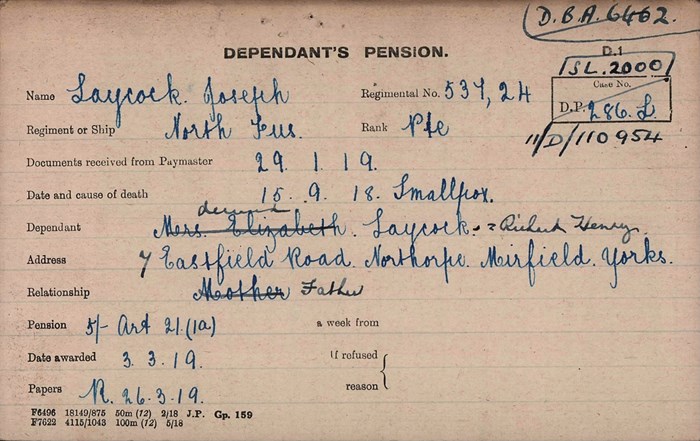 In order to cross reference Elizabeth and Richard to Joseph, there are two ‘Widows and Dependents’ cards as shown below: 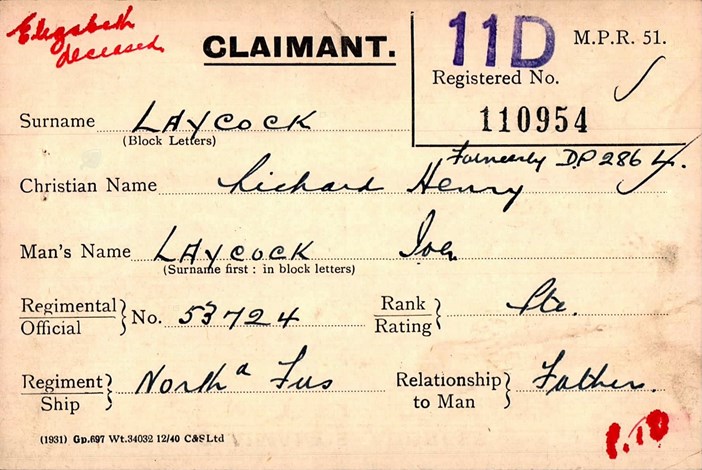 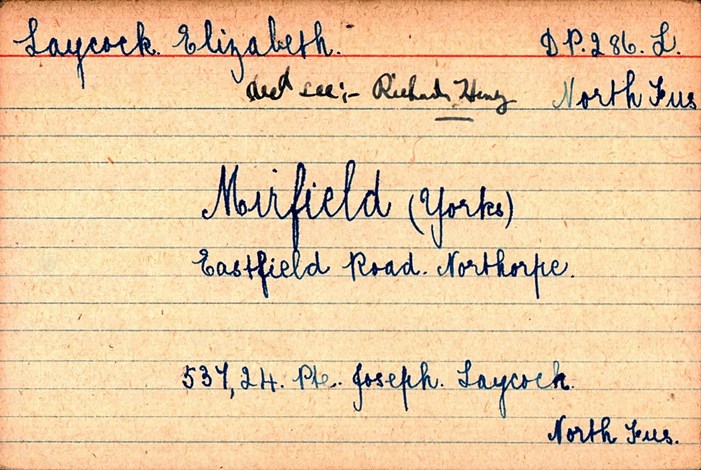 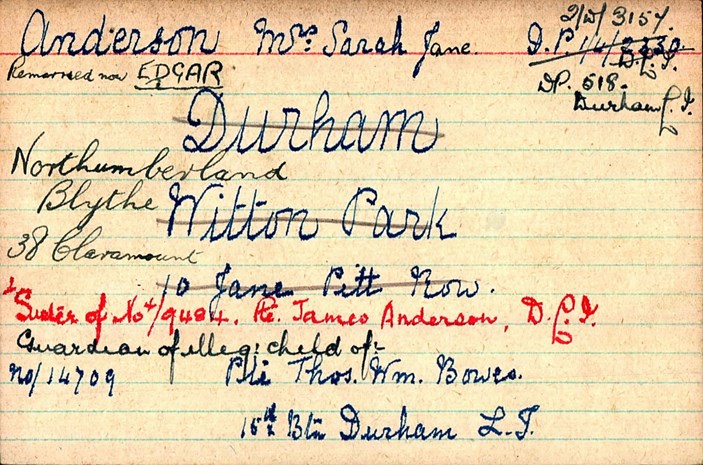 The 'equivalent' 'Other ranks killed' card for this soldier is below: 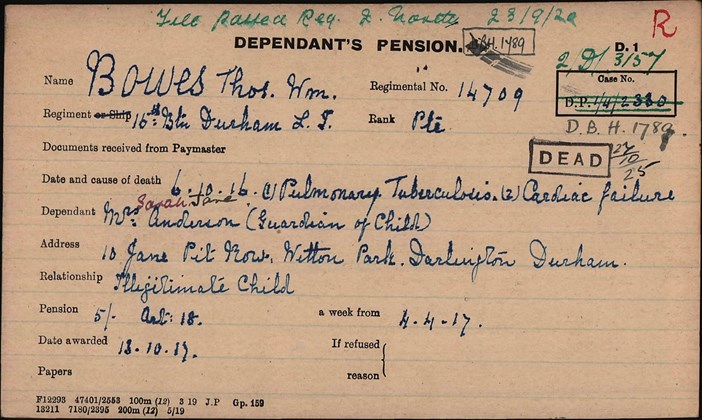 How the Pension Cards and Ledgers interconnect