South West Rocks is a small town with a population of about 5000 on the mid north coast of New South Wales, about 400 kilometres north of Sydney.  Located where the Macleay River enters the Pacific Ocean at Trial Bay (named after the brig Trial, which was wrecked in the area in 1816 after being seized in Sydney Harbour by escaping convicts), the town – whose name comes from an outcrop of rocks to the south west of a vessel entering the Macleay River - is a popular holiday destination renowned for water sports and fishing.  Like most Australian cities and towns, a prominent War Memorial commemorates the sacrifice of those who gave their lives for their country. According to the Macleay River Historical Society, 83 locals joined the AIF during the Great War; the 10 enlistees who died during, or as a result of, their war service are commemorated on the town war memorial. 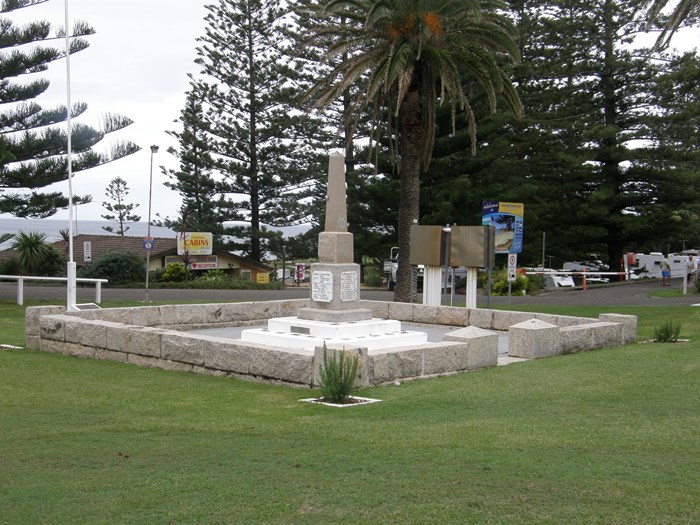 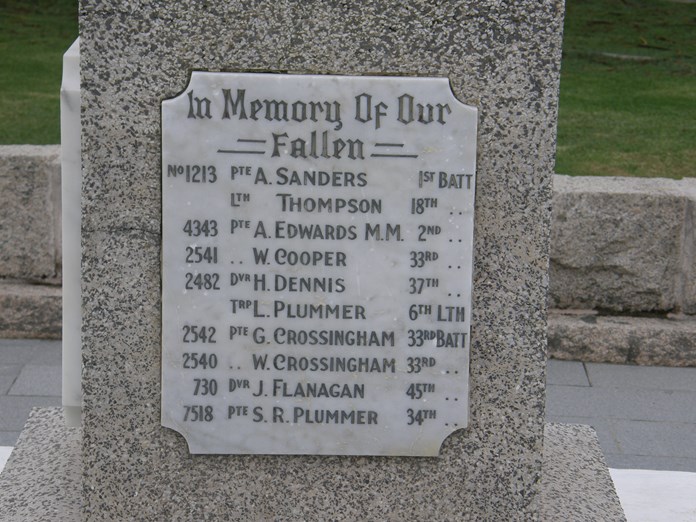 Unlike most other municipalities, the fallen from South West Rocks are also commemorated by metal tablets fixed to ten headstone-like concrete blocks on the roadside in Memorial Avenue (formerly Sturt Street), which runs parallel to Prince of Wales Avenue, the town’s main street.  Graves and monuments in far off Gallipoli, France, Flanders and Palestine were too distant for many Australians to visit in the period of the War’s aftermath, so local monuments provided a focus for families and friends to mark the passing of loved ones.  When the monuments were installed in 1927 a Norfolk Island pine tree was planted next to the tablets of the eight men who lost their lives during the conflict, but four of the trees grew too large for a modern streetscape and have been replaced by New Zealand Christmas Bush.

The ten men commemorated in Memorial Avenue are (in the order they appear on the Memorial:

Pte Alexander Macleay Sanders (1213) [the son of the 1914 Macleay River Pilot, whose house was adjacent to the land where the War Memorial now stands] was 27, and working as a labourer, when he joined the 1st Reinforcements to the 1st Battalion on 16 October 1914.  He landed at Gallipoli on 25 April 1915 and stayed on the Peninsula until he was wounded on 23 May, after which he was evacuated to Lemnos.  In early June he re-joined his Battalion.  On 6 August, during the offensive from Anzac Cove, he was killed by a bomb in a Turkish trench at Lone Pine.  He was originally posted as Missing in Action, but an investigation revealed that a witness saw his body some time later.  A Court of Enquiry determined that he was killed in action. 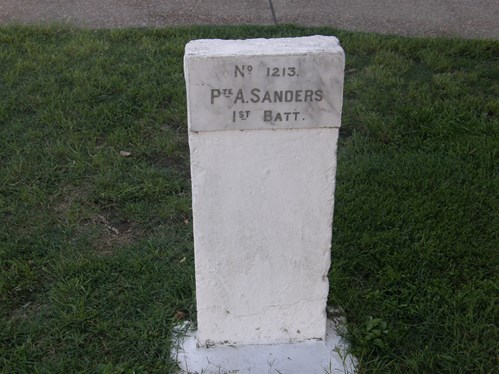 Pte A M Sanders has no known grave, and is commemorated on the Lone Pine Memorial, Turkey.

Lt Harold Hubert Thompson was 26, and working as a builder, when he joined the 18th Battalion in February 1915.  He sailed from Australia with the 3rd Reinforcements, and was taken on strength with his Battalion in October 1915.  Within two months he was promoted to Corporal, then acting Sergeant, soon after before being wounded in the abdomen in July 1916. After a period in hospital in England, he re-joined the 18th Battalion in October, and in April 1917 was selected for officer training at Cambridge, after which he was commissioned in August, and returned to his battalion. On 15 April 1918, Lt Thompson died of wounds received in action north of Hangard Wood in France. 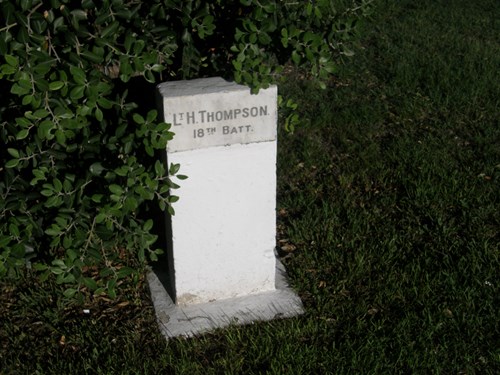 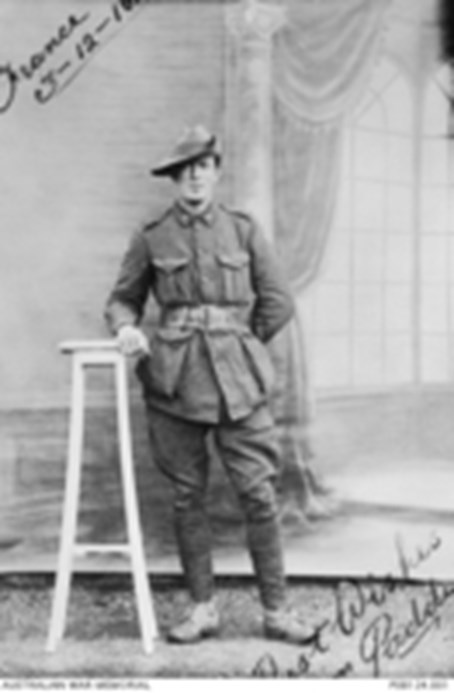 Pte Allan Parish Edwards MM (4343) was a 32 year old shearer when he enlisted in the 13th Reinforcements to the 3rd Battalion on 28 September 1915.  On arrival in Egypt in early 1916 he spent some time in hospital before being moved to England, where he spent some time in the AIF Cyclist Training Battalion before joining the 2nd Battalion in October.  In May 1917 he suffered a gunshot wound in his right elbow and was out of action until late June, after which he was transferred to the 1st Brigade Headquarters as a Storeman.  On 23 October Pte Edwards was awarded the Military Medal, the citation: 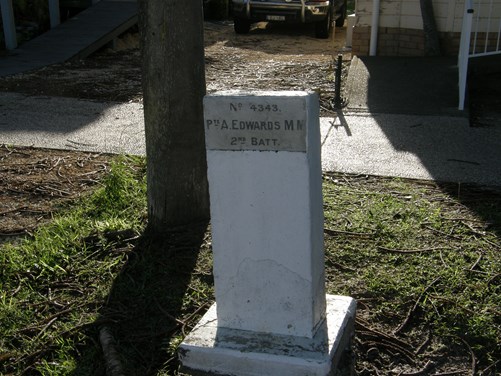 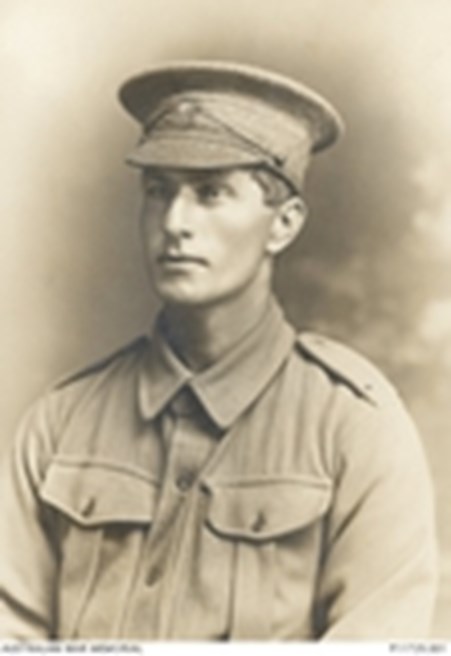 Pte Wellington Cooper (2541), from Jerseyville, was nearly 27, and working as a fisherman when he was recruited into the 5th Reinforcements to the 33rd Battalion at Kempsey in July 1916.  He arrived in France in April 1917, and was admitted to hospital as a gas casualty in June before rejoining his battalion in July.  He was killed in action on 12 October 1917 during the Third Battle of Ypres. 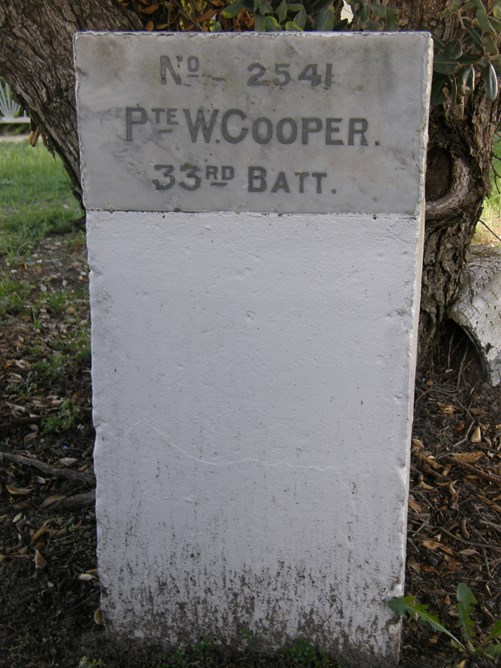 Dvr Harold George Dennis (2482) was a seaman from Kinchela, aged 23, when he enlisted in the 7th Reinforcements to the 13th Battalion in April 1915, joining the unit at Mudros in October. After a period of sickness, he transferred to the 10th Field Artillery Brigade as a Driver in March 1916, and went to France with his new unit. He had another spell in hospital in July 1917 before rejoining the Brigade.  On 7 October he was badly wounded in the arm and chest, resulting in his death two days later in the 2nd Canadian Casualty Clearing Station near Ypres.  His personal effects were sent back to Australia, but were lost when the SS Barunga was lost due to enemy action. 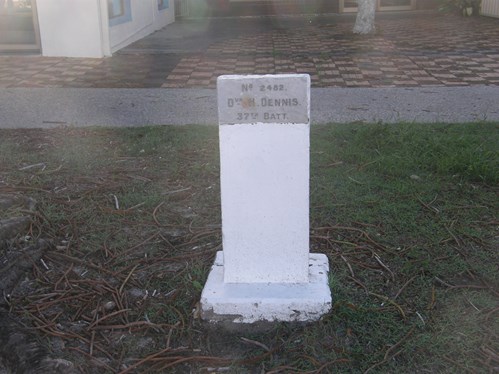 Tpr Lionel Hastings Plummer was a farmer from Clybucca when he enlisted in the 6th Light Horse at Victoria Barracks, Sydney, in November 1915.  He was sent to Casula, near Sydney, for training, but before he was even allocated a Regimental number, he died from bronco-pneumonia and measles in Liverpool Hospital in February 1916. 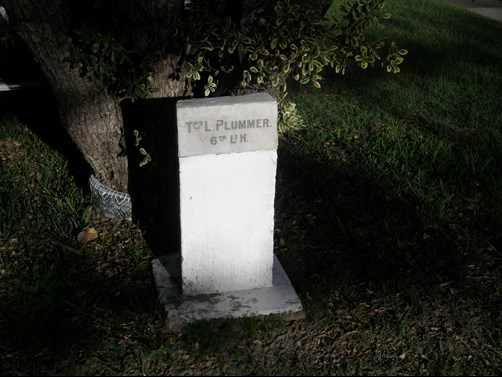 Pte George Henry Crossingham (2542) was a Jerseyville farmer, aged 25, when he enlisted in the 5th Reinforcements to the 33rd Battalion in September 1916 (together with his older brother W A Crossingham).  He joined his unit in France in April 1917 and remained with the battalion until a he enjoyed a fortnight’s leave in the UK in March 1918.  On 6 April he was wounded in action, and succumbed to his injuries at the 46th Casualty Clearing Station next day. 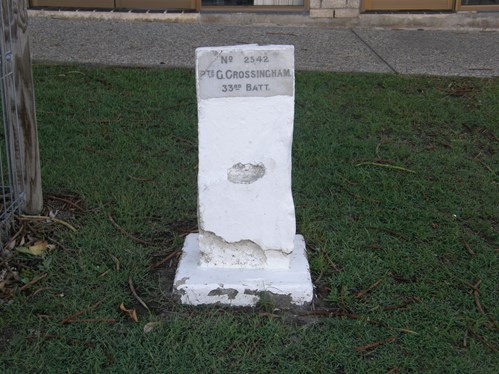 Pte William Arthur Crossingham (2540) was 31, and working as a farmer on the Manning River when he joined the 5th Reinforcements to the 33rd Battalion in September 1916.  Two months later he left Australia to join his unit on the Western Front, but was hospitalised on arrival in the UK, where he died from pneumonia in King George Hospital, London, in February 1917. 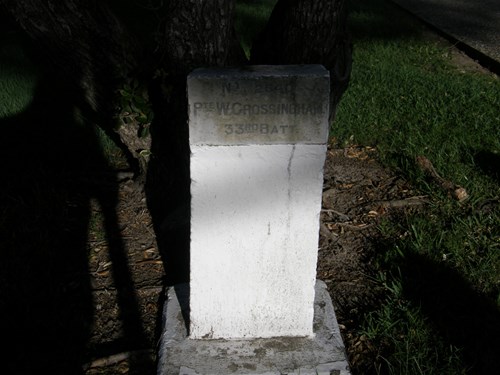 Dvr Patrick John Flanagan (730) was a drover from the Macleay River, aged 30, when he enlisted in the 13th Battalion in September 1914 before being processed at Rosehill Racecourse.  He landed at Gallipoli in April 1915 but was evacuated sick early in May. Several bouts of illness followed before he was transferred to the 45th Battalion early in1916 before the unit moved to France. In 1917 he suffered more illness and spent time in hospitals in England and France. In October 1918 he returned to Australia on the Special Leave granted to those who enlisted in 1914. He was discharged from the AIF in February 1919. His death sometime after 1927 was apparently considered due to his service in the AIF. 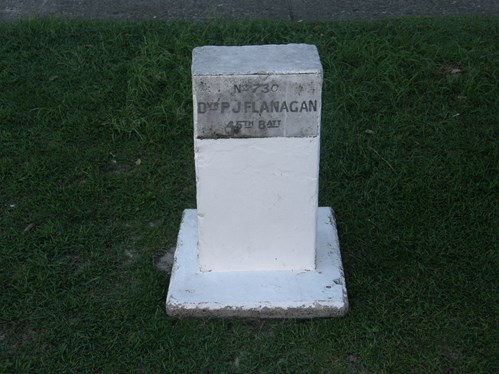 Pte Stanmore Robert Plummer (7518) was only 19, a farmer from Kempsey, who joined the 25th Reinforcements to the 34th Battalion at Liverpool in February 1917. After training in Australia and the UK he joined his unit in France in January 1918, where he served until the Armistice, returning to Australia in August 1919, to be honourably discharged in September.  His death in 1935 was attributed to his war service. 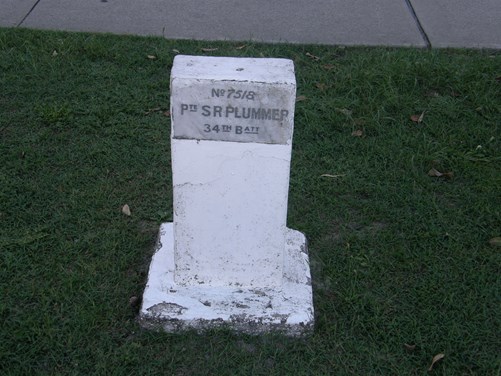 There are other places of Great War interest near South West Rocks, with the most interesting being the Old Trial Bay Gaol. 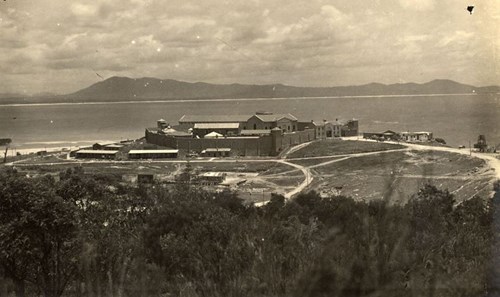 Trial Bay Gaol, c.1915. Dubotzki collection, Germany (above) (image courtesy of NSW Migration Heritage Centre) and as it is today (below) 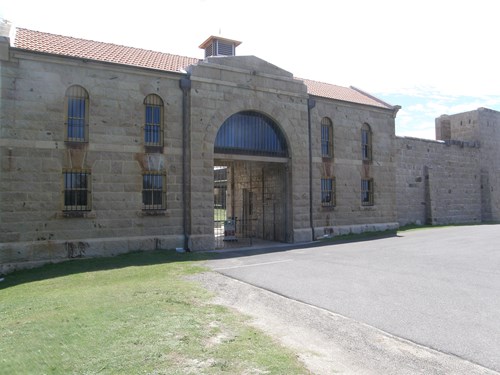 In the mid-19th century there was a plan to make Trial Bay a storm refuge for ships travelling between Sydney and Brisbane, being roughly half way between the two ports. The mooring area was to be made safe by using convict labour to constructing a long breakwater made of locally quarried stone. The convicts also built an imposing prison as their barracks, and the building walls and cell blocks remain today, unlike the breakwater, which was destroyed by storms and high seas several times before the project – and the associated Gaol - was abandoned.  During the Great War, the Gaol was reopened to house interned German and Austro-Hungarian civilians, guarded by soldiers from the German Concentration Camp unit. The internees were mainly affluent and educated men who were able to transform their prison into something like comfortable quarters.

At the time of the War, the Trial Bay area was only connected to Sydney by water, with steamers bringing supplies and people in, and taking them out. There was a road to Kempsey, some 40 kilometres upstream on the Macleay River, but not much else. In essence, the sheer isolation of Trial Bay made it an effective and escape-proof facility.  In 1918 there was a plan to concentrate all interned Enemy Aliens in a central Camp in the [then] Federal Capital Territory (now Australian Capital Territory) and Trial Bay Gaol was abandoned again.  It is now administered by the NSW National Parks and Wildlife Service, with one cell restored to the its wartime condition to illustrate the life of the internees. The gaol includes a fascinating museum, with much of the display centred on the Great War. 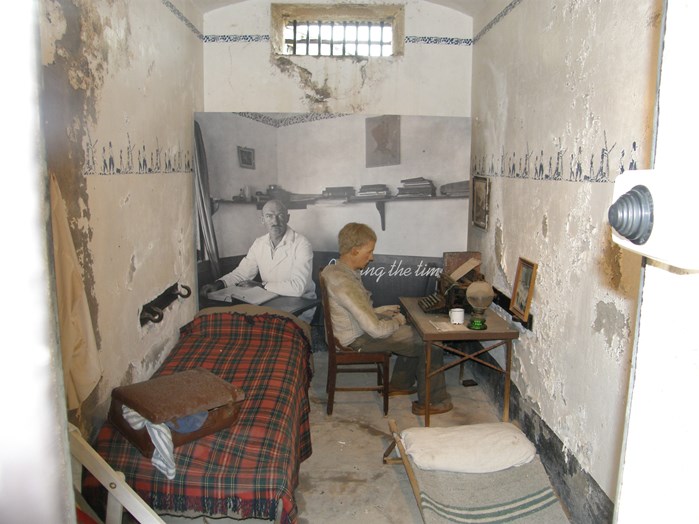 About a kilometre from the gaol is something that must be unique in Australia: a monument to Germans who passed away during the War.  A stone obelisk marks the last resting place of four internees who died from natural causes while interned at Trial Bay. Erected during the war, it was blown up in 1919, probably by returned soldiers. It was eventually restored, and is now the joint responsibility of the German Government and Kempsey Shire Council. 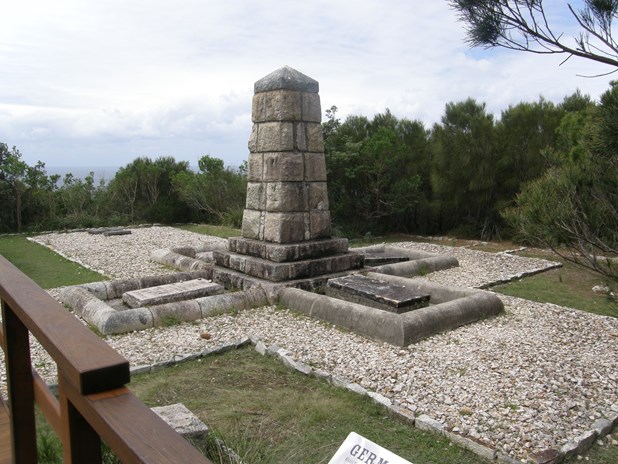