The battle at Rafa, (or more accurately the 'Action at Rafa') which took place on 9 January 1917, was a small affair that rarely receives any mention in accounts of the First World War. It was, however, a victory that ended the Sinai campaign of 1916.

During 1916 British and Commonwealth forces under General Sir Archibald Murray began pushing eastwards across the Sinai Peninsula from their defensive positions adjacent to the Suez Canal. Due to the desert climate, the advance was dependent on the construction of a water pipeline to support the troops. Reaching El Arish, mounted forces captured Turkish fortifications at Magdhaba on 23 December 1916. 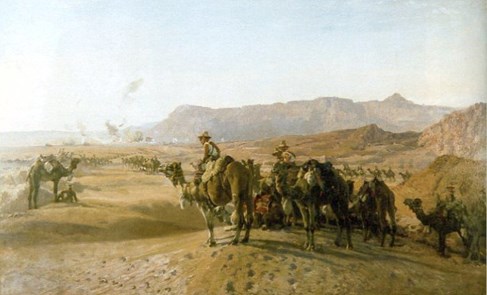 Above: ‘Camel corps at Magdhaba.’ The painting depicts mounted troops of the Imperial Camel Corps Brigade with the Egyptian town of Magdhaba in the distance, 23 December 1916.

Keen to push on, Murray decided to attack the Turks at Rafa, on the Egyptian-Palestinian border. Murray assigned this task to the Australian and New Zealand Mounted Division which was led by Maj-Gen Sir Harry Chauvel, accompanied by Brigadier General E.A. Wiggin’s 5th Mounted Brigade and the Imperial Camel Corps Brigade led by Brigadier General C.L. Smith, VC. 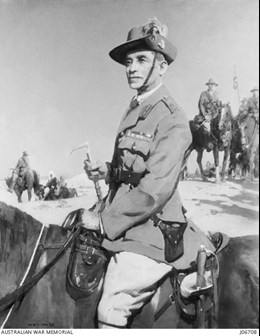 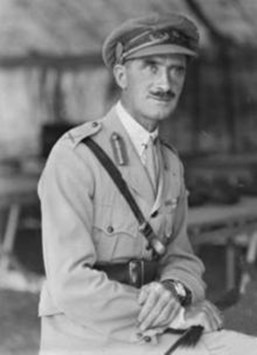 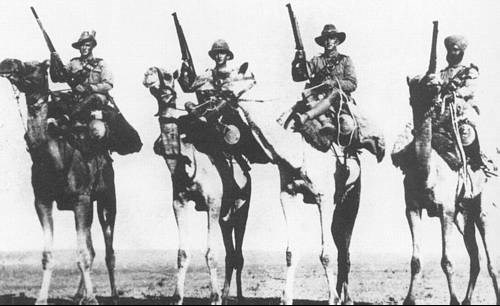 Above: Guerrilla Operations 1918: The 'Imperial' nature of the Camel Corps in 1918; mounted troops from left to right, the Australian, British, New Zealand and Indian sections.

Just three miles south of Rafa the 2,000 strong Turkish force had constructed a defensive position at El Magruntein, on a rise known as Hill 255. Approaching Rafa on the morning of 9 January the Australian and New Zealand Mounted Division and the 5th Mounted Brigade together with three battalions of the Imperial Camel Corps Brigade isolated the garrison by cutting the telegraph lines to Gaza. The New Zealanders were sent to the south with instructions to attack the Turks from the east and north. Meanwhile the 5th Mounted Brigade moved in from the west. At 7am artillery opened fire on the Turkish redoubts. 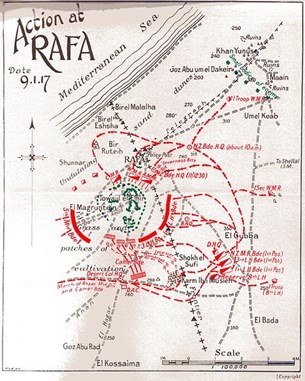 Advancing across open ground, the assault was held up as the Turks were able to maintain a high rate of fire; the British and Commonwealth forces began to run low on ammunition early in the afternoon. 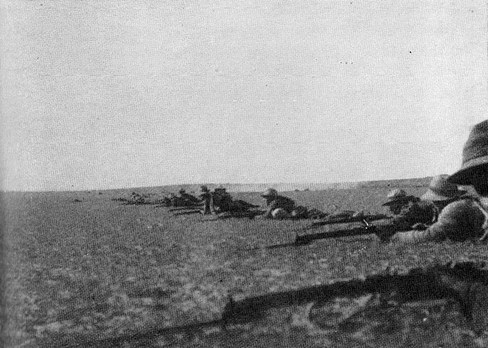 Aware of the approach of a Turkish relief force, plans were made to fall back to El Arish. As evening approached several units launched final efforts against the Turks. Charging from the north, three New Zealand regiments attacked the main redoubt on Hill 255, supported by the Imperial Camel Corps and the regiments of the Australian Light Horse. These attacks succeeded in overcoming the Turkish opposition who began surrendering.

The Battle of Rafa cost the Turks about 200 killed, with possibly nearly as many again wounded and about 1500 taken prisoner. 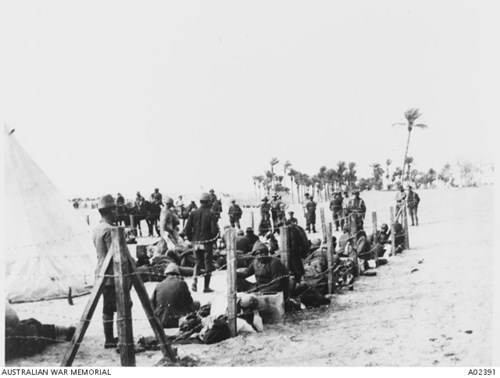 Above: Captured Turkish prisoners in a temporary compound at El Arish after having been captured at Rafa. (AWM A02391)

Still concerned about the Turkish relief column, orders were given to begin falling back towards El Arish. The Turks became wary of leaving isolated garrisons on the Sinai frontier which resulted in them abandoning their positions outside Gaza.

Although most accounts suggest that the Allied losses were only around seventy, research undertaken for this article suggests the figure is in fact over one hundred. The Western Front Association is pleased to be able to honour these men for the first time in full on the ‘Rafa Roll of Honour’. [1]

The downloadable Roll of Honour below details the graves of all the men killed in this action, the grave detailed is at Kantara War Memorial Cemetery unless otherwise stated. 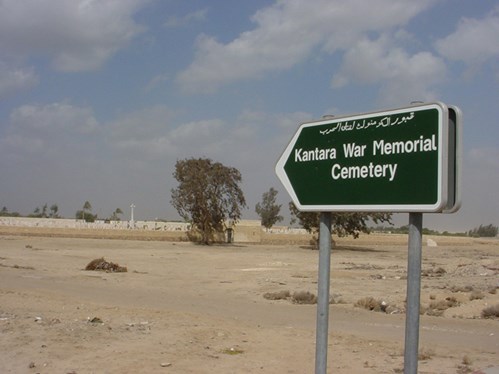 The most senior officer to be killed in this action was Major Henry Clifford (photo below) of the Royal Gloucester Hussars. 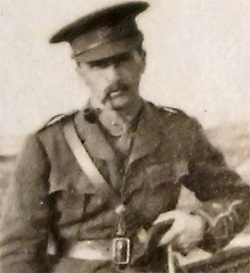 At the outbreak of war, he returned to his regiment, the Gloucestershire Yeomanry (with whom he had served in South Africa during the Boer war) with the rank of Major. In 1920, a memorial tablet to him was unveiled in Frampton Church.

Clifford's Medal Index Card is shown below. These cards can be accessed using the WFA members' link with Fold3/Ancestry (WFA membership password required). 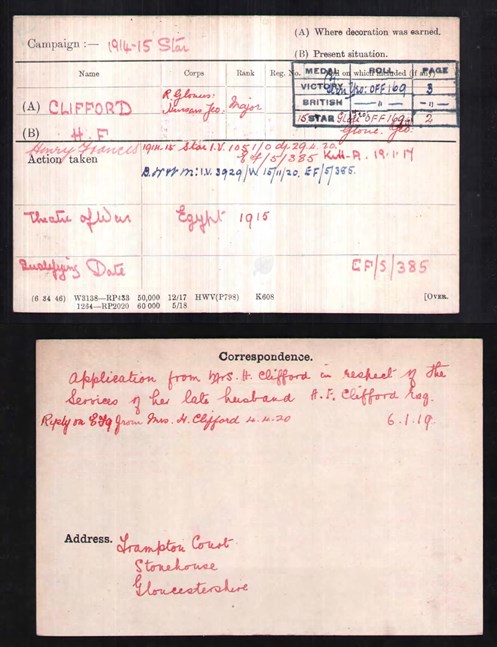 Amongst those killed were two brothers from New Zealand, Thomas and John Graham who died on 9 and 10 January respectively.

There are some interesting personal pieces of information that can be gleaned about some of the men who fell in this action, such as the various addresses recorded for Mary Ferguson, the mother of Frederick Ferguson of the Scottish Horse 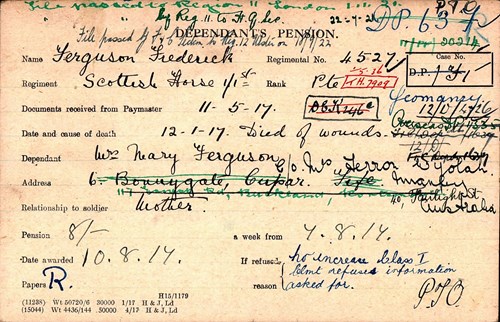 There are also two cards for Patrick Gibney. One of these stating that the 'unofficial wife' who was 'possessed of private means and did not wish to claim...' 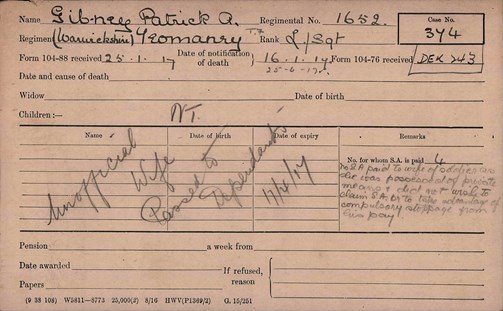 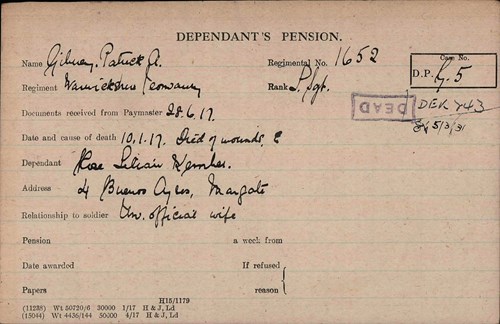 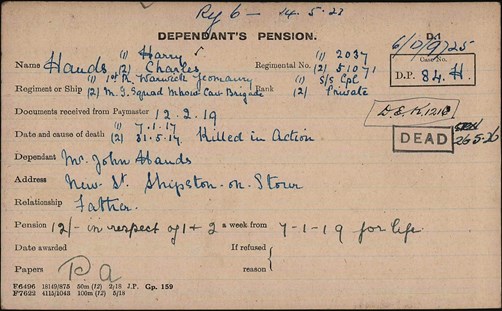 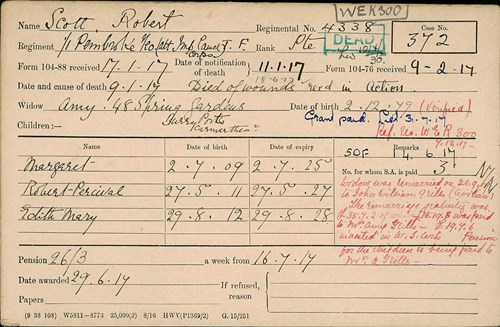 The British War Cabinet postponed the invasion of Palestine until later in 1917 because of commitments on the Western Front. Notwithstanding this policy, the British commander in Egypt, General Murray, decided to make an early attempt to capture Gaza, to clear the way for the main invasion – this led to three Battles of Gaza in March and April of 1917. 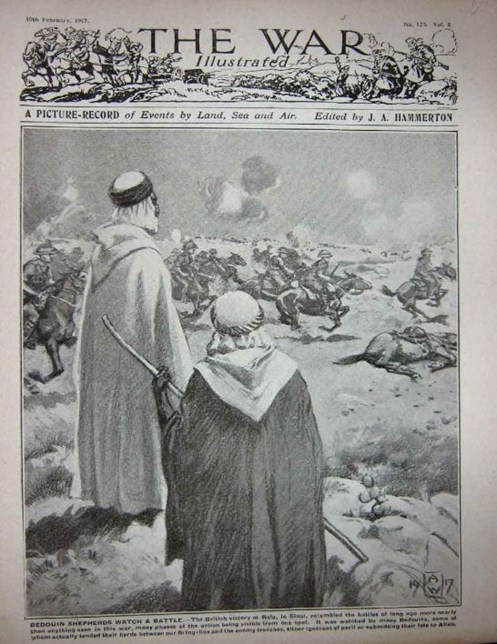 The War Illustrated dated 10 February 1917 - a month after the action - carried the illustration above - with the caption shown in more detail below. Although the facts detailed here may be dubious, the information about the 'action' was certainly passed onto the readers with great speed.

CWGC Burials and Commemorations of those killed at Rafa

The majority of those killed during the Action at Rafa are buried at the Kantara War Memorial Cemetery (click here for a link to a map of the location - which is adjacent to the Suez Canal). 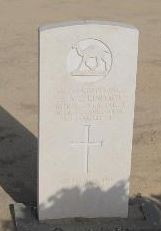 Above: A headstone to a soldier of the Imperial Camel Corps at Kantara War Memorial Cemetery. 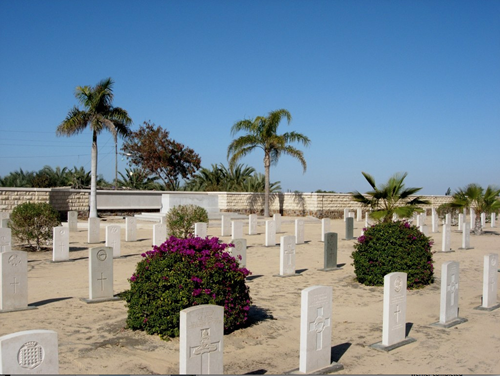 Within Kantara War Memorial Cemetery there are also 341 war graves of other nationalities, many of them from a Polish hospital that was here in the Second World War. These are concentrated in a distinct Polish extension.

It has been impossible to say with certainty that the men from the Herefordshire Regiment and the British West Indies Regiment were killed during this attack. The balance of probability is that they were not. However, these men are named on the Roll of Honour.

There is one error on the CWGC database here: Private PG Holmes was not at this time a member 32nd Battalion AIF but was part of the Imperial Camel Corps.