The Camera Returns No. 10 at the Central Tank Workshops at Erin, near St Pol by Bob Grundy and Steve Wall 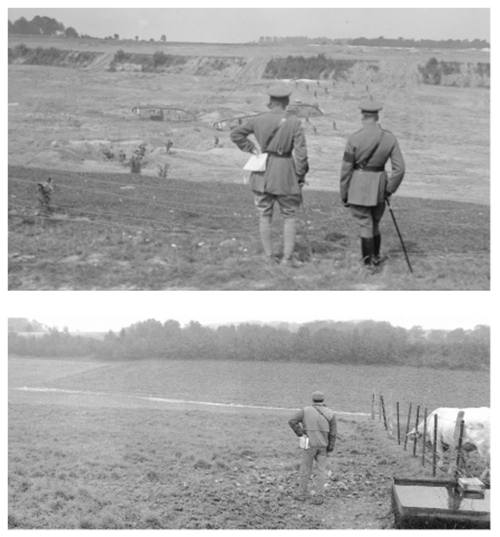 Taken a few miles down the road at Sautrecourt, IWM photograph Q11460 shows King George V (who later became Colonel in Chief of the Tank Corps) witnessing a demonstration by Mark V Star tanks, two males and a female, on 10 August 1918. With him is Major General H. Elles, commanding the Tank Corps. Hugh Elles, a Royal Engineer was, at the age of thirty-eight, somewhat young for his rank but he was an exceptional and dynamic leader. As a Brigadier General he had personally led the tanks into battle at Cambrai the previous November. Undeterred by the danger involved, he had singled out a male tank, 'Hilda', in the leading wave, unfurled a brown, red and green Tank Corps flag which he placed on the top of the tank, and gone 'over the top' with his tanks and troops. He travelled with 'Hilda' for just under two hours before she became ditched in a trench of the Hindenburg system. He then calmly walked back to his own headquarters.

Unfortunately the location of the photograph is difficult to describe. Sautrecourt is a tiny hamlet on the D343, a continuation of the D94 on which Erin stands: see S T /26. Sautrecourt is thus 6 km south-east of Erin, just before the villages of St Martin and Wavrans sur Tervoise. The valley in which the photograph was taken is to the west of the villages and requires some walking to obtain a comparison! In our comparison, taken looking north over the valley, Bob has taken the place of Hugh Elles, later Sir Hugh Elles, who died in 1945. As Steve was taking the photograph, we felt extremely fortunate in finding a stand in for the King, albeit a four-legged one!